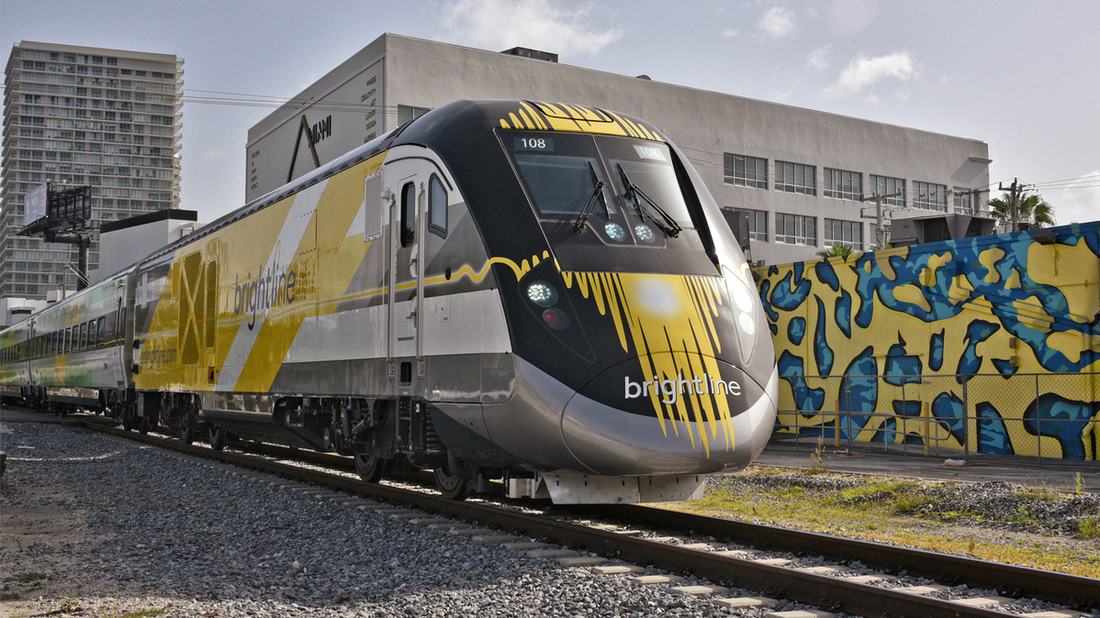 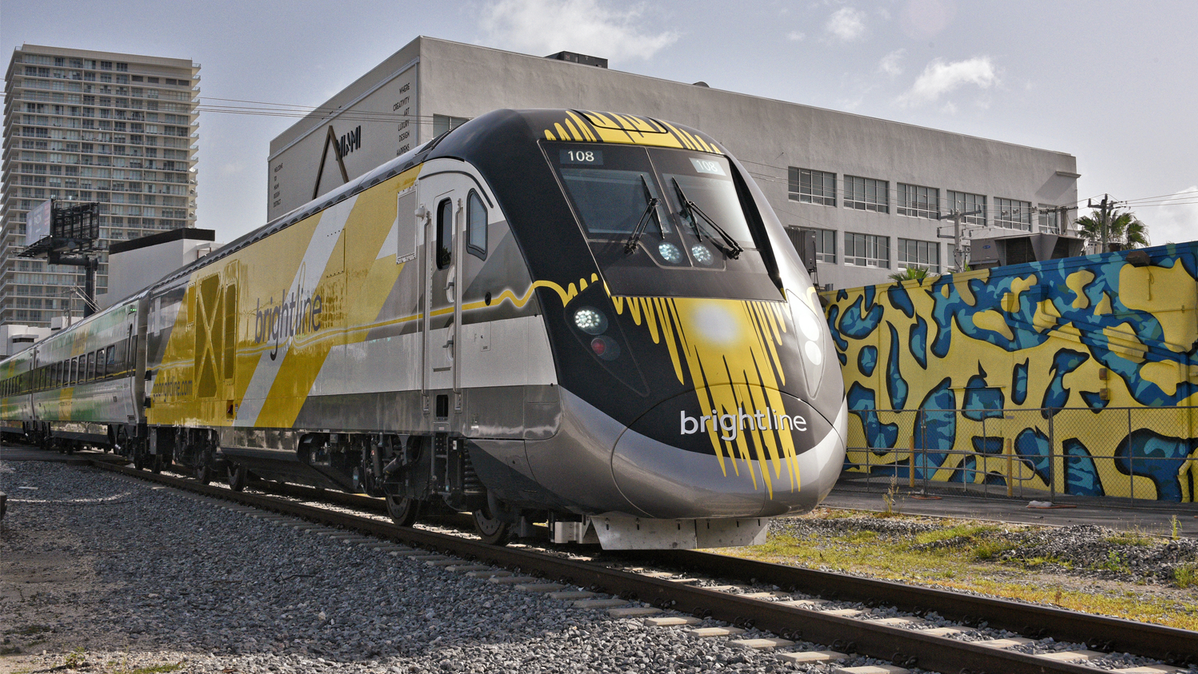 The $3 billion Brightline express train project will launch this month with trains operating from West Palm Beach to Fort Lauderdale.

The country's first private high-speed rail service is opening this month in Florida, promising to transform congested South Florida highways by taking as many as 3 million cars off the road.

The ambitious $3 billion Brightline express project will run along the state's densest population corridor with more than 6 million residents and a regular influx of tourists. The project, funded by All Aboard Florida, represents the first test into the long-awaited U.S. move into high-speed rail, says John Renne, director of the Center for Urban and Environmental Solutions at Florida Atlantic University.

"It's the first time that it's happening, being built by a private company," he tells Here & Now's Jeremy Hobson. "And that's kind of a game changer for this type of model."

The model includes developing retail, restaurants and condominiums around the stations. All Aboard Florida secured state approval in October to sell bonds to fund the project. The company has said no public money will be used.

When the service starts this month, Brightline trains will run from West Palm Beach to Fort Lauderdale. Service will expand into downtown Miami early next year and likely to Orlando in the future. Renne says the trip from West Palm to Miami, which can take up to five hours round trip in a car, will take about 60 minutes each way on the train. 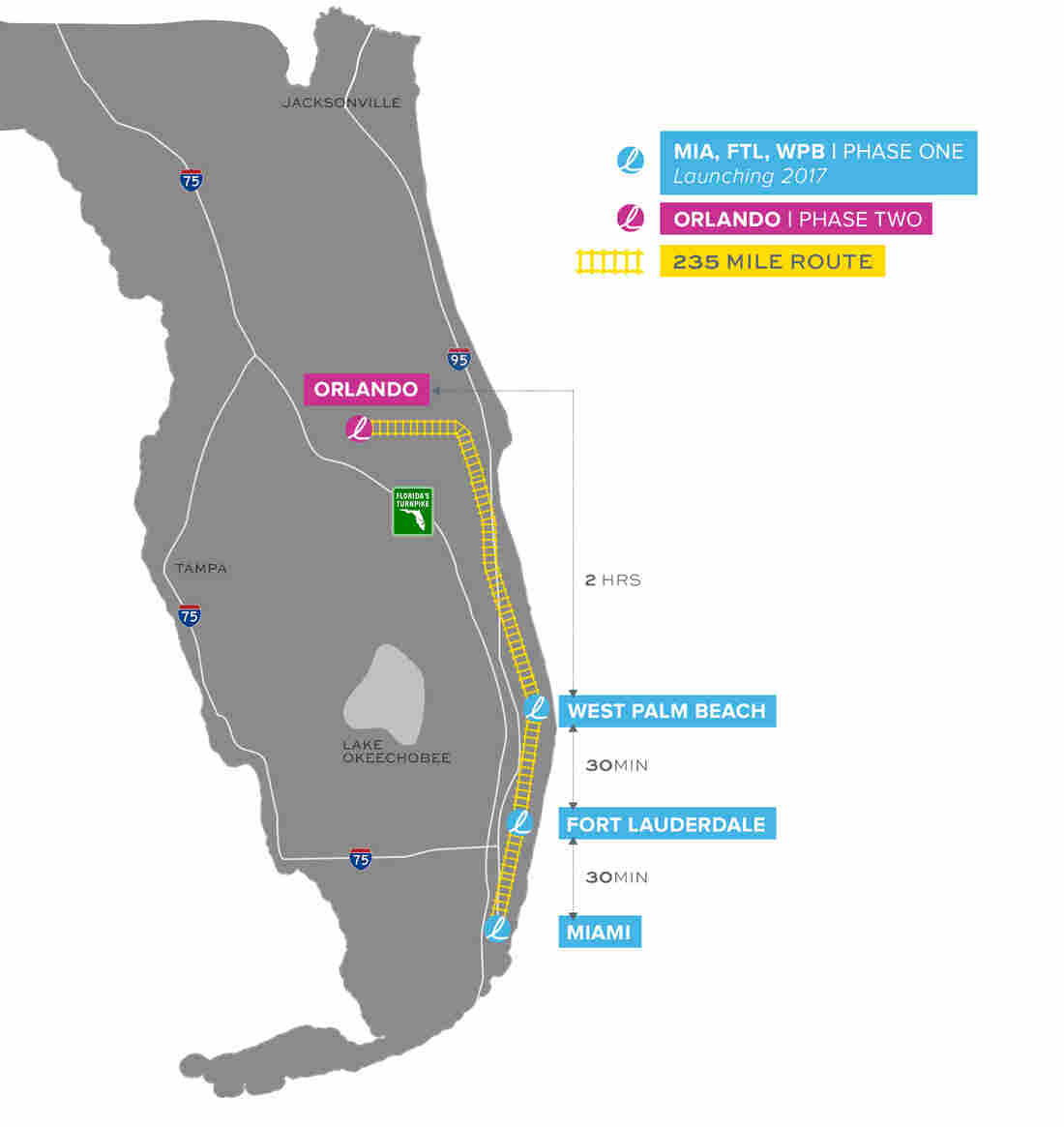 Brightline trains will run along one of the busiest transportation corridors in South Florida. Trains will operate from West Palm Beach to Fort Lauderdale and will expand into Miami early next year. Courtesty of Brightline hide caption

Beyond slashing travel times, Renne says the construction of private mixed-use real estate developments at each station will bring in hundreds of millions of dollars in new revenue. He explains that potential revenue was lost when the government shifted control of transportation to the public sector in the 1920s.

"When that happened, we lost the connection between the development around the stations and the rail service itself, and we started building a lot of parking lots around the stations," he says. More people stopped using public transportation because "once they're in their car, they might as well just drive the whole way."

Renne says Brightline trains will have their own dedicated set of tracks, built alongside 19th century lines that still carry cargo trains. The return to passenger trains will revive a line that stopped running on those old tracks in the 1960s, with the arrival of the federal highway program.

"The federal highway system expanded ... and everyone got off trains and into cars," John Guitar of All Aboard Florida told Here & Now in 2014. "And we've done a full circle now that the traffic and congestion and gas prices are so bad, people are looking for alternatives to get out of their cars and find other ways to get around the state."

The project has also sparked outrage. Two counties along the wealthy Treasure Coast sued to stop the Brightline project, arguing it poses significant safety concerns and would likely delay commuters in cars. Most of those lawsuits have been tossed out or dropped.

The state's $18-billion boating industry is also concerned. A system of drawbridges allows fishing boats and luxury yachts to pass through South Florida's heavily traveled waterways. But the bridges must remain down when trains are in the area. In 2014, Jim Naugle of the Marine Industries Association of South Florida told Here & Now's Peter O'Dowd that train traffic will cause congestion on the water.

In 2015, the boating industry and All Aboard Florida came to an agreement on the use of drawbridge in Fort Lauderdale after a Coast Guard test proved successful for allowing both boats and trains to pass through.

There are also concerns that development along the rail line will boost the cost of living in an area that already lacks affordable housing, Renne says. This might deter other states looking to launch privately funded train systems.

"Housing is super expensive, so when you build new housing in these particular locations, they are in high demand from the people that want to live close by," he says.

All Aboard Florida has yet to confirm the price of Brightline tickets. A 2015 study commissioned by the company suggests it will cost at least $16 to travel from West Palm to Miami – about $10 more than the price to travel a similar route on South Florida's government-run passenger train.

Even though All Aboard Florida refers to Brightline as "high-speed rail," Renne says the actual speed pales in comparison to trains overseas. He says Brightline trains will max out at about 120 mph, and will run even slower – around 80 mph – during the rollout.

Florida has a long history of controversy over high-speed rail. In 2011, Gov. Rick Scott refused a $2 billion federal loan to build a fast train because of the financial liability.

Renne says All Aboard Florida is betting that if it can't make enough money on ticket revenue, the real estate next to the stations will fill in the gap.

A previous version of this story incorrectly stated that the drive from West Palm Beach, Fla., to Miami can take up to five hours. It should have said five hours round trip.