Accessibility links
Season 2 Of 'The Crown' Exposes The Royal Family's Fitful Evolution The best episodes of this season are layered and complex; they juggle questions of whether a good marriage is possible in a royal setting, and how forgiveness has its limits. 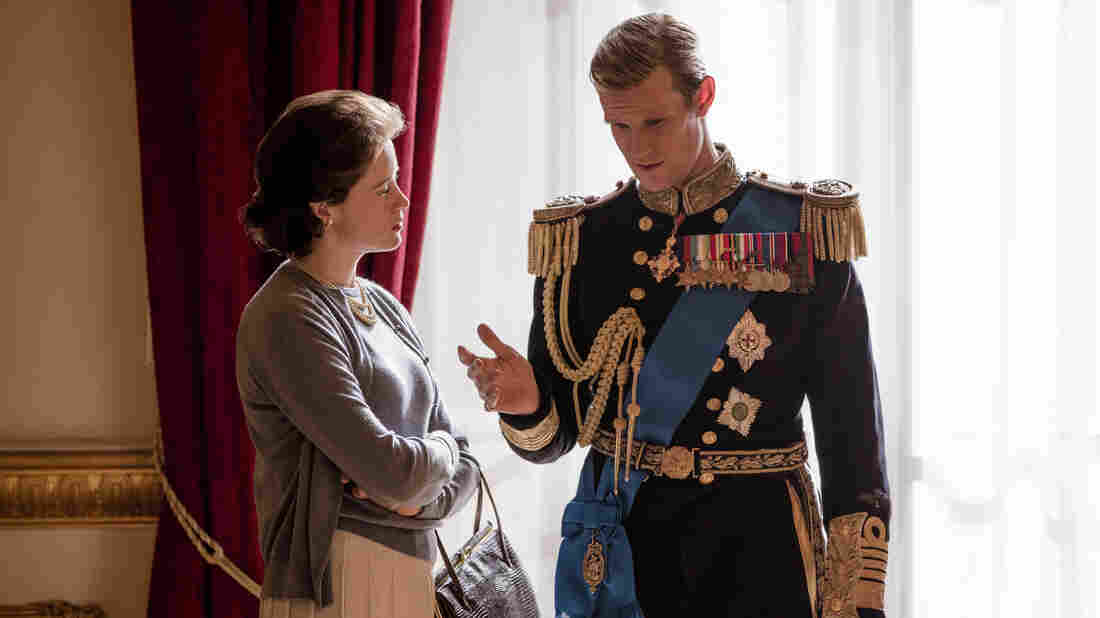 The first three episodes of The Crown's new season focus on turmoil in the royal marriage between Elizabeth (Claire Foy) and her husband, Philip (Matt Smith). Robert Viglasky/Netflix hide caption 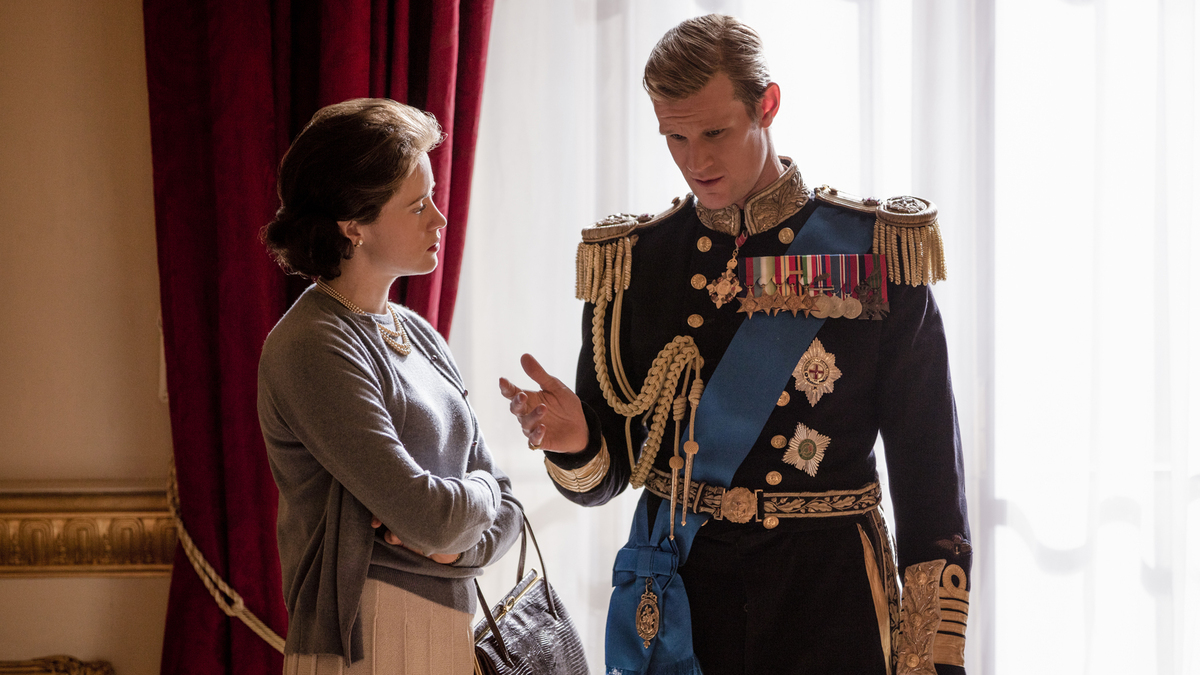 The first three episodes of The Crown's new season focus on turmoil in the royal marriage between Elizabeth (Claire Foy) and her husband, Philip (Matt Smith).

To be honest, I never really understood why so many people saw The Crown as a superior TV show last season.

Yes, the Netflix drama has the production values and ambition of an epic motion picture, tracing the long reign of Queen Elizabeth II. And for those who miss the aristocratic soap opera of Downton Abbey, a big-budget recounting of the royal family's turmoil over marriages and abdications is quite a replacement. Who can argue with 13 Emmy nominations?

Still, to me, there was always a problem. The Crown too often felt like a show telling two disconnected stories — one focused on world-shaking events which shaped the face of modern England, and the other on the palace intrigue of a royal family distanced from those big events.

Admittedly, it's the perspective of a cheeky Yank who doesn't quite get the British monarchy: If they don't actually run the country, why is every moment of their lives treated with such importance by the show?

Fortunately, the second season of The Crown — covering events from the mid-1950s to the mid-1960s — answers that question. But not without first returning to its old tricks.

The first three episodes of the new season focus on turmoil in the royal marriage between Elizabeth, played by Claire Foy, and her husband Philip. It's an elaborate story, showcasing Doctor Who alum Matt Smith's amazing ability to play Philip as both a sympathetic figure trapped by the rigid demands of royal life and a blithely selfish jerk blinded by entitlement and childish petulance.

When rumors of infidelity emerge during a five-month diplomatic trip Philip takes without the queen, he can only focus on how the officials who run the royal household boss him around.

"Giving me lists. Sending me instructions. Can you imagine anything more humiliating?" Philip whines to Elizabeth.

"Yes," she says, as reporters surround the royal yacht, speculating about cheating and divorce. "As a matter of fact, I can."

This is all taking place while Britain is fighting over the Suez Canal and the prime minister is dealing with health problems that force him to leave the country for three weeks. So the royal marriage, which we already know survives this crisis, seems a little less important.

But The Crown soon takes a turn toward a powerful run of episodes. In one, a British aristocrat and magazine publisher named Lord Altrincham challenges Elizabeth to prove the monarchy remains relevant in a post-war world by being more accessible and modern.

"Spend time with normal people ... average people, working people," urges Altrincham, who would later renounce his own title in a challenge to England's class system. "Make it more inclusive and egalitarian. Let normal people get to know you, too."

It feels as if you could draw a straight line of progress from the ideas in that scene, to the current moment: When a member of the royal family is engaged to marry a divorced, biracial woman from America.

Another episode features the Duke of Windsor, who had to abdicate the throne in 1936 to marry a divorced American woman. (how times have changed!) When the duke asks to return to a job in the English government as part of the royal family, Elizabeth must decide whether to allow it.

As the episode progresses, Elizabeth slowly discovers just how close the duke was to the Nazis and Hitler during the war. I won't drop spoilers by detailing it all here, but it is a chilling moment when she learns the full truth. The entire story is bracketed by Elizabeth pondering the limits of forgiveness as demanded by her faith, eventually consulting evangelist Billy Graham to sort through her feelings.

Dexter alum Michael C. Hall pops up as John F. Kennedy in a wonderful episode. It shows how international acclaim for Jackie Kennedy intimidated — and eventually angered — Elizabeth so much that she flew to Ghana, determined to prove her relevance by persuading that country's ruler to reject communism.

Hall's take on Kennedy's trademark Boston accent is kinda horrible. But the episode — which connects the Kennedys' troubled marriage to Jackie acting out in a way that spurred Elizabeth to defy her government and take action in Ghana — is exactly the kind of storytelling that turns The Crown into transcendent drama.

The best episodes here are layered and complex; they juggle questions of whether a good marriage is possible among people in this orbit, how a family's history can shape children and their parents and how forgiveness has its limits. Occasionally, they end with photos showing the actual events and people fictionalized in the series, often with poignant effect.

So, at long last, I understand just how amazing a triumph The Crown is, at least in its second season — exposing the fitful evolution of a family which continues to represent one of the most compelling institutions in the world.