Accessibility links
Deputy National Security Adviser Dina Powell To Leave The White House The White House announced that Powell, who has played a key role in Middle East policy, will be leaving the administration early next year. 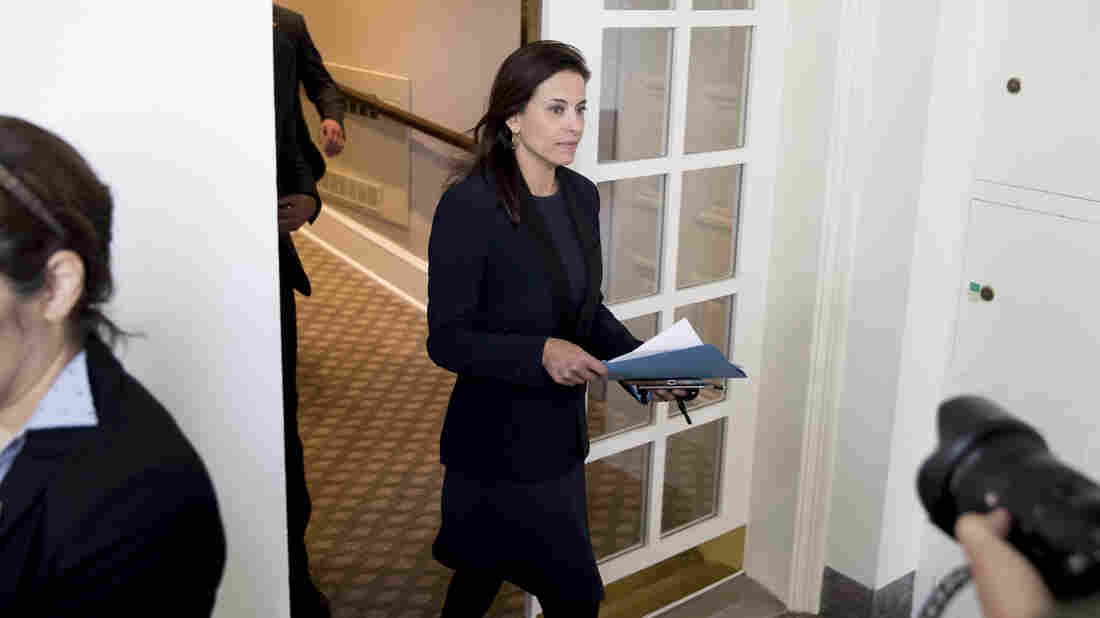 White House deputy national security adviser Dina Powell will resign from her position early next year, the first of what could be several departures expected around the one-year anniversary of President Trump's swearing-in.

Powell has been deeply involved in the Trump administration's Middle East policy and has accompanied him on his trips overseas, sitting in on meetings with world leaders and offering counsel.

"Dina Powell has been a key, trusted advisor in this administration," said press secretary Sarah Huckabee Sanders in a statement confirming the planned departure. "She has always planned to serve one year before returning home to New York, where she will continue to support the President's agenda and work on Middle East policy."

Earlier this week, Trump announced he was officially recognizing Jerusalem as the capital of Israel, setting off widespread condemnation outside Israel and throwing the U.S. role in any peace process into doubt. Trump and others in the administration, though, say they remain committed to finding peace between Israel and the Palestinians and think this week's announcement could help. Powell is expected to accompany Vice President Pence on his trip to the region next week.

"Dina has done a great job for the administration and has been a valued member of the Israeli-Palestinian peace team," said Jared Kushner, a top adviser to the president and Trump's son-in-law. "She will continue to play a key role in our peace efforts and we will share more details on that in the future."

Powell came to the Trump administration from Goldman Sachs and previously served in the Bush administration. She is Egyptian-American and fluent in Arabic. She initially came into the White House as an adviser to Ivanka Trump, serving as senior counselor for economic initiatives. But she quickly moved to the National Security Council, when national security adviser H.R. McMaster brought her over to his team after he replaced Trump pick Michael Flynn. McMaster described her in a statement on Friday as "invaluable."

"Her sage advice helped provide options to the President and her strong relationships across the U.S. government and internationally helped drive execution of the President's decisions," McMaster said. "She is one of the most talented and effective leaders with whom I have ever served."

That doesn't mean the president has always taken her advice. In a White House that at times has been divided into factions, Powell was one of the "globalists" (a moniker bestowed by former chief strategist Steve Bannon), along with National Economic Council Director Gary Cohn, also formerly with Goldman Sachs, and McMaster.

It has long been rumored that Cohn and Secretary of State Rex Tillerson will also leave the administration around the one-year mark. The White House denies those rumors.