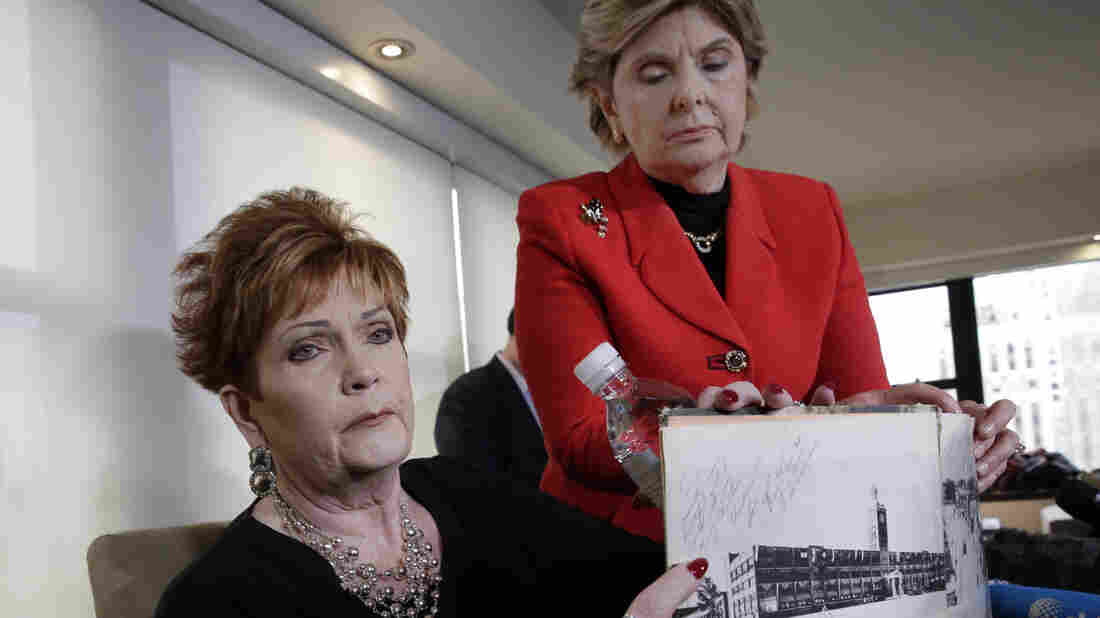 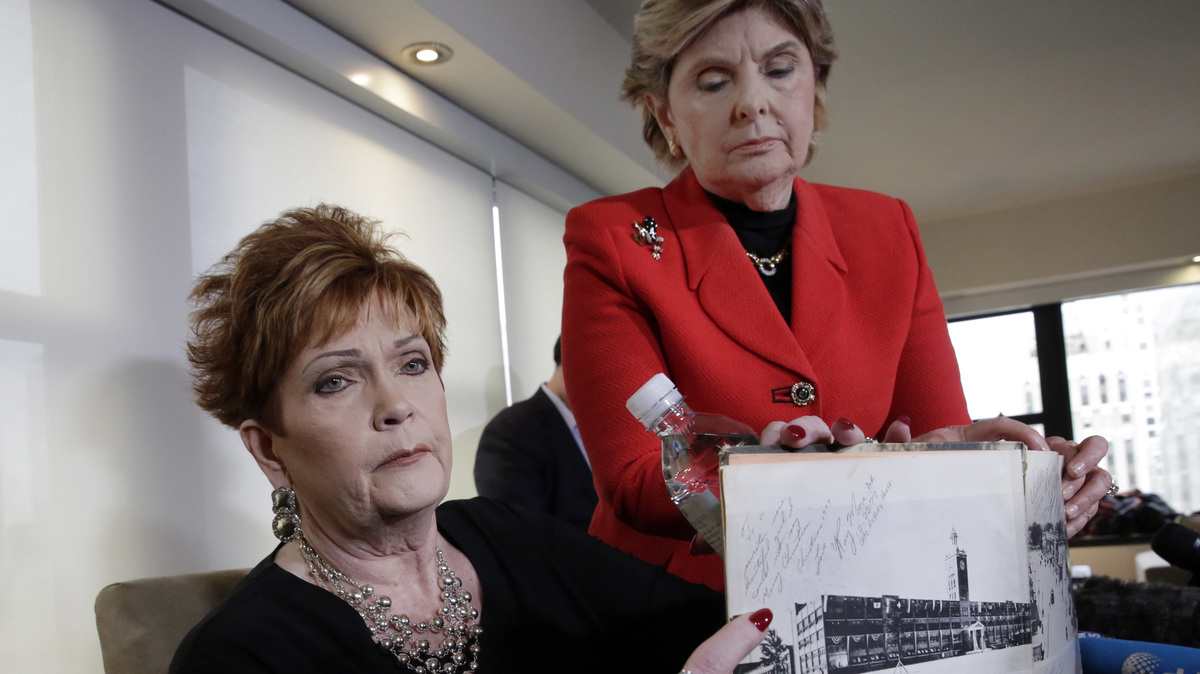 Speaking at a campaign rally Friday night in Florida — but about 20 miles from the Alabama state line — President Trump seized upon news that one of GOP Senate nominee Roy Moore's accusers had added to a yearbook inscription which she has offered in support of her allegations that Moore sexually assaulted her when she was a teenager decades ago.

"So did you see what happened today? You know the yearbook?" Trump asked attendees in Pensacola, Fla. "There was a little mistake made."

"Anytime you see [Gloria Allred], you know something is going wrong," the president said about the celebrity attorney representing Beverly Young Nelson.

Nelson, who has accused Alabama GOP Senate nominee Roy Moore of sexually assaulting her 40 years ago, admitted Friday to adding a notation to a high school yearbook inscription she says Moore wrote in 1977. However, she still maintains that Moore's signature and the message in the yearbook to her are both authentic and penned by Moore.

Nonetheless, Moore, his allies and his attorney seized on the admission, pointing to it to argue that Nelson's allegations of sexual misconduct against Moore are not true. And Trump followed suit hours later, finally getting to talking about the Alabama Senate special election almost 45 minutes into his unwieldy speech that was mostly campaign-style stump rhetoric.

"We cannot afford — this country, the future of this country — cannot afford to lose a seat in the very, very close United States Senate. We can't afford it, folks," Trump said, echoing previous comments he's made urging people to vote for Moore despite the allegations of sexual assault and sexual misconduct from multiple women.

"We can't afford to have a liberal Democrat who is completely controlled by Nancy Pelosi and Chuck Schumer," Trump said, claiming that Democratic nominee Doug Jones would be "their puppet."

"We want jobs, jobs, jobs, so get out and vote for Roy Moore," the president continued, before returning to his refrains about the economy and foreign policy and to reliving his 2016 victory. 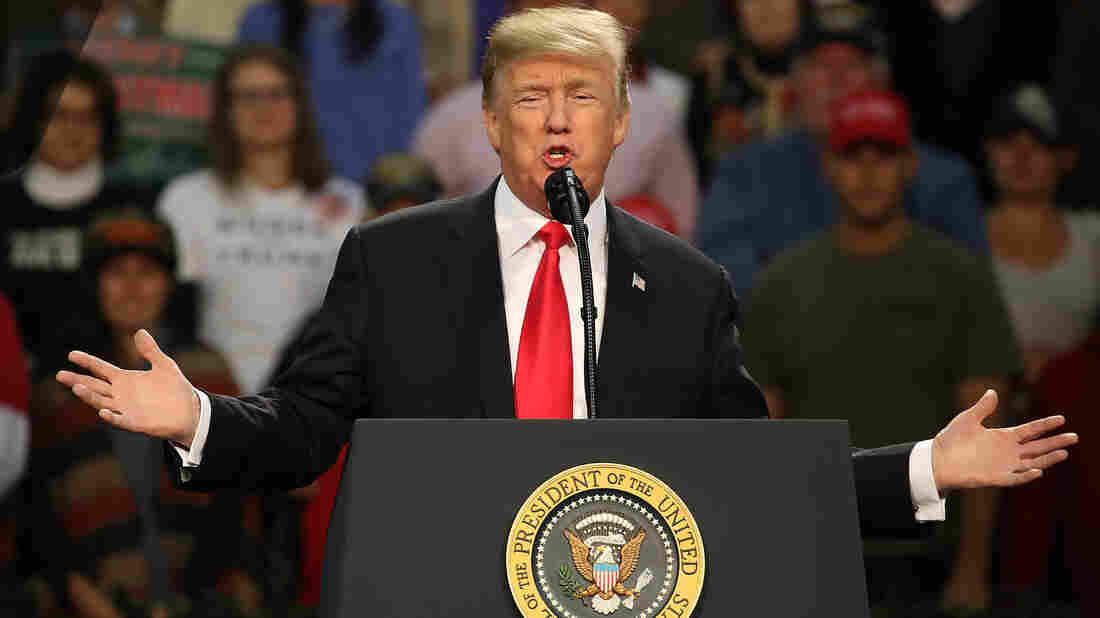 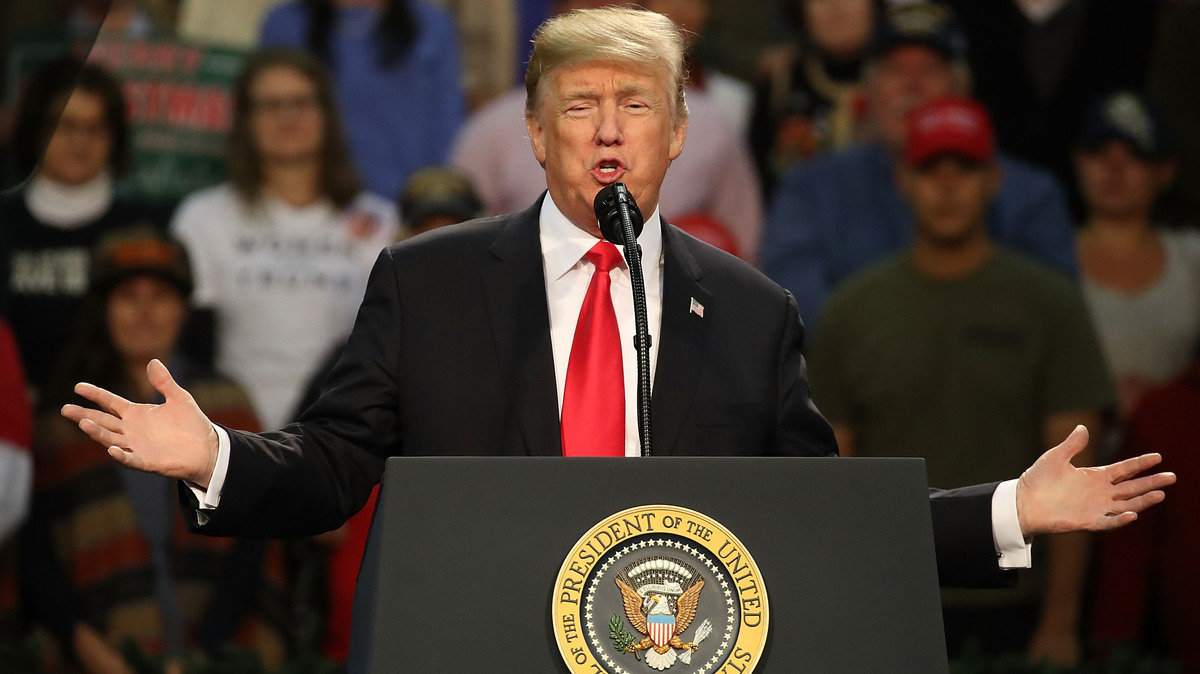 President Donald Trump speaks during a rally on Friday in Pensacola, Fla.

Moore was not at the rally, but the timing — Alabama voters go to the polls Tuesday — and chosen location for one of the president's frequent campaign rallies raised questions of whether Trump was trying to help Moore even if the two men did not appear together. Trump himself faced multiple accusations of sexual assault during his presidential campaign, which he has denied.

Other national Republicans have distanced themselves from Moore, and the Senate GOP campaign arm pulled funding from his campaign when multiple accusers came forward last month. But the Republican National Committee, following Trump's full-throated endorsement of Moore on Monday, restored financial help for the embattled Senate nominee this week.

Nelson, one of several women who have accused Moore of sexual misconduct in recent weeks, alleged that Moore groped her and tried to force himself on her while in his car. At the time, Nelson said, she was 16 and Moore was in his 30s. Her allegations against Moore were made alongside Allred last month and she presented the yearbook inscription as proof she and Moore had known each other 40 years ago.

In an interview with ABC News Friday, Nelson reiterated that Moore signed the yearbook. The inscription says: "To a sweeter, more beautiful girl I could not say Merry Christmas. Christmas 1977. Love, Roy More, D.A. 12-22-77 Olde Hickory House." Olde Hickory House was the restaurant Nelson worked at in Gadsden, Ala., where she said she met Moore in the 1970s.

"Beverly, he signed your yearbook," Nelson was asked by ABC News' Tom Llamas.

Llamas followed up with: "And you made some notes underneath."

ABC News did not ask Nelson specifically what notes she added.

Conservative media outlets and supporters of Moore quickly pounced on the admission as proof that Nelson was not being truthful.

Wayne Dupree, host of the Wayne Dupree Show, tweeted: "Roy Moore Accuser Doctoring Yearbook Inscription This is one, Beverly Young Nelson won't be able to take back. Will media report or overlook this one on Sunday talk shows??"

This is one, Beverly Young Nelson won't be able to take back. Will media report or overlook this one on Sunday talk shows??https://t.co/Pl8m26q6SU via @WayneDupreeShow

Roy Moore himself tweeted Friday: "Now she herself admits to lying."

During a news conference in Atlanta Friday afternoon, Nelson again appeared alongside Allred and doubled down on her accusations against Moore.

"I want everyone to know that I stand by my previous statement that Roy Moore sexually assaulted me," Nelson said.

She said her expert concluded the writing was prepared by Moore and called Anthony's analysis "important evidence" that supports her client's claims.

Allred added: "We did not ask the expert to examine the printing after the cursive writing and signature, because Beverly indicates that she added that to remind herself of who Roy Moore was and where and when Mr. Moore signed her yearbook."

In a separate press conference late Friday afternoon in Montgomery, Ala., Moore's attorney Phillip Jauregui referenced Nelson's Nov. 13 news conference where he said Allred and Nelson had said "everything written in that yearbook was written by Judge Moore." He added: "Well, today it's a different story, isn't it?"

Jauregui said he has known Moore for more than 24 years and has never witnessed Moore acting "remotely inappropriate."

"We hoped back then that when you have allegations that are 40 years old, that somehow, something can come out to prove that it's not true. Well, guess what? It has," Jauregui said.

Moore's campaign has denied all of the sexual misconduct allegations, including Nelson's. Moore also said the handwriting in Nelson's yearbook was not his — adding that he was not the district attorney at the time, but the assistant district attorney.

Moore's legal team has called on Allred and Nelson to release the yearbook so the signature in question can be independently examined.

Moore is running against Democrat Doug Jones in a special Senate election to replace Attorney General Jeff Sessions. The seat has been held temporarily by appointed Sen. Luther Strange, whom Moore defeated in a special GOP primary in September. 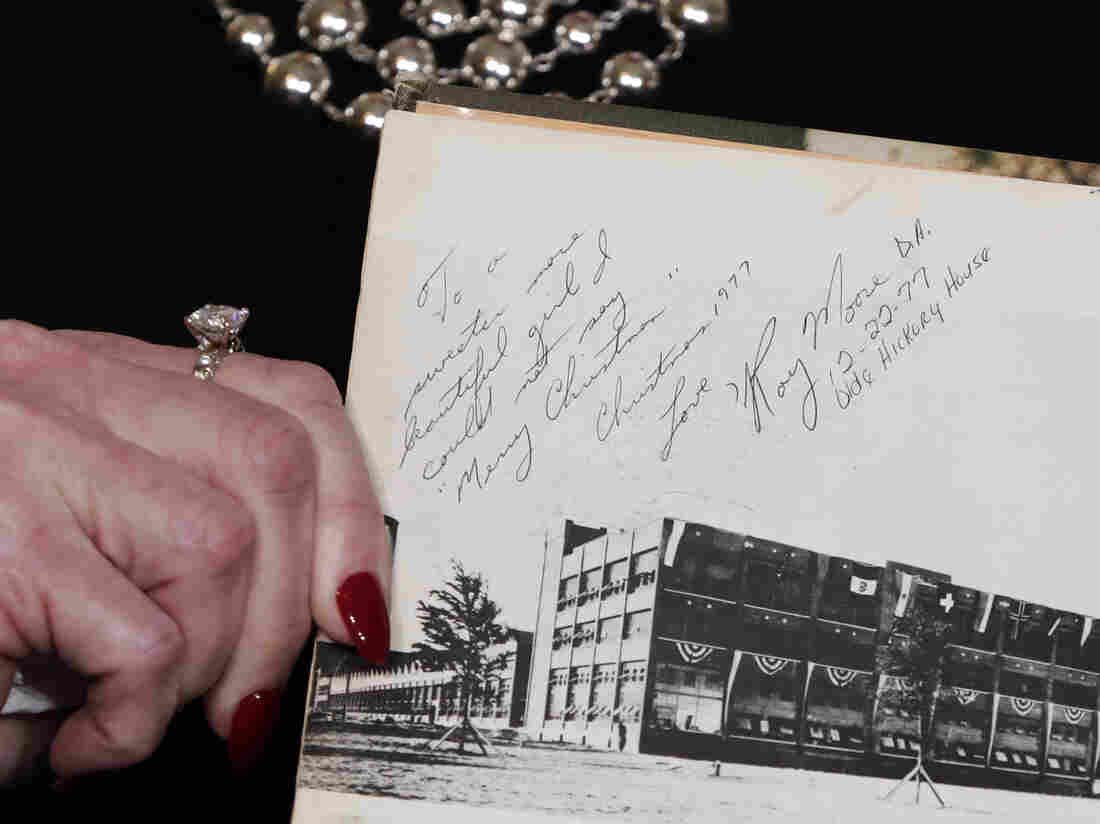 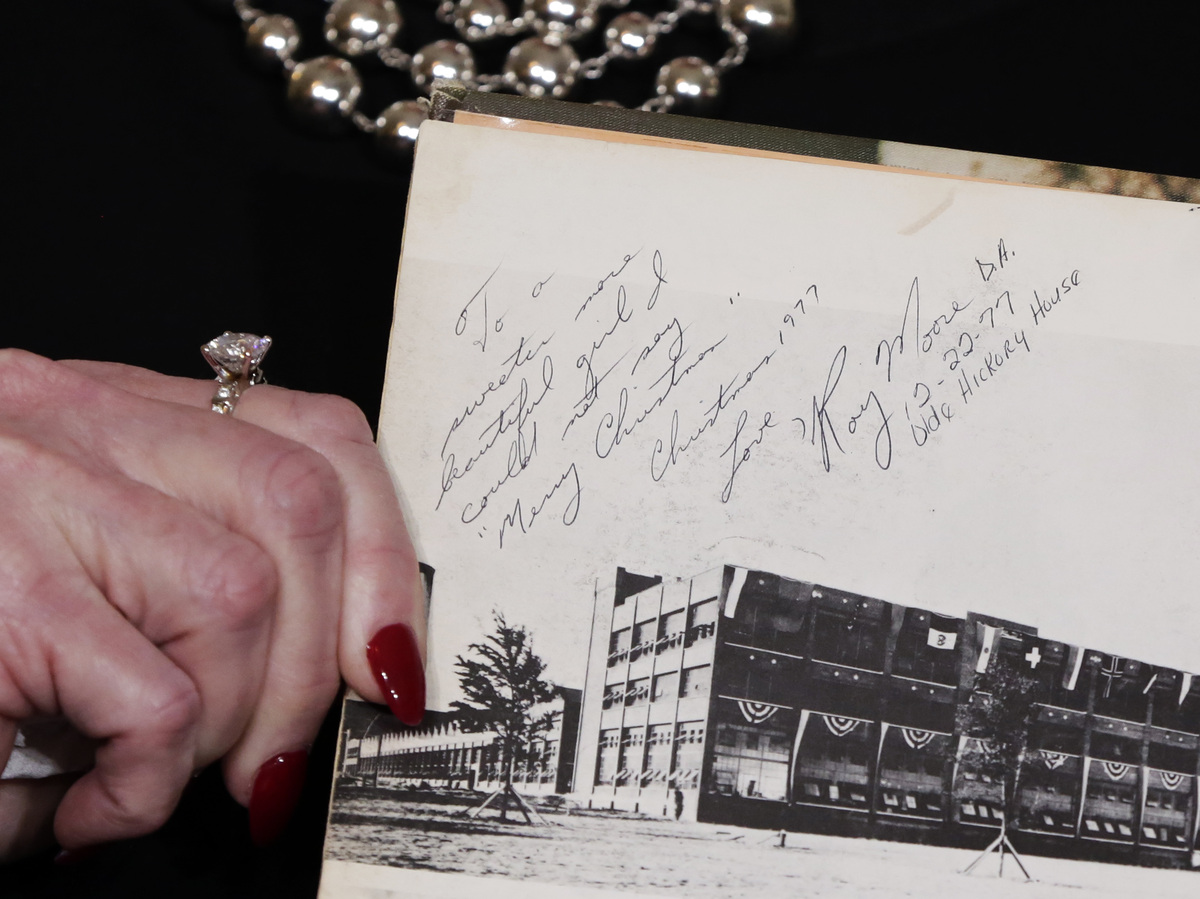 Nelson, one of several accusers of Alabama Republican Roy Moore, shows her high school yearbook she alleges was signed by Moore, at a news conference last month.