Accessibility links
Before Roy Moore, Alabama Grappled With 'Kissing Jim' Alabama's political history is littered with episodes mixing sex and power in unseemly ways. A former governor, "Big Jim" Folsom, claimed he had kissed "50,000 of the sweetest mouths in Dixie." 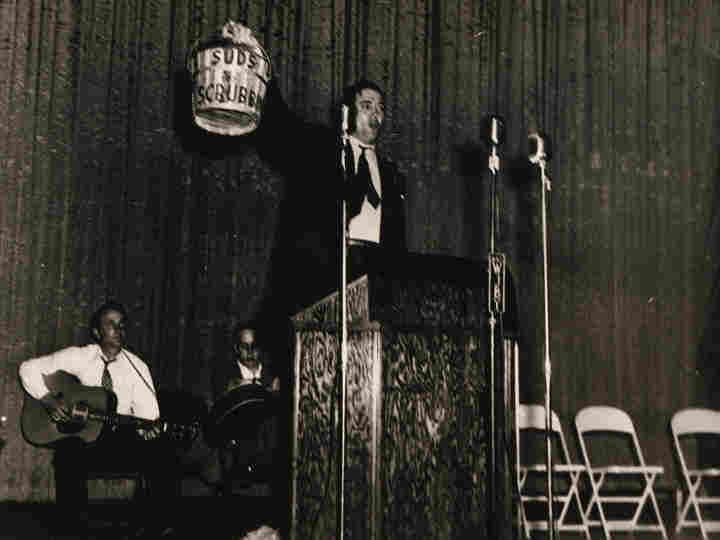 "Big Jim" Folsom during a campaign event in 1946. He also would bring a bucket and mop to campaign events, vowing to clean up state government. The bucket was used to collect campaign donations. Courtesy of the Alabama Department of Archives and History hide caption

toggle caption
Courtesy of the Alabama Department of Archives and History 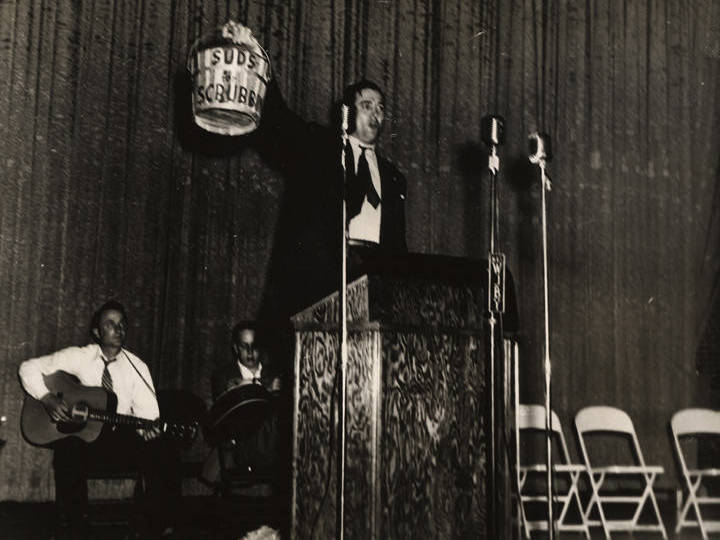 "Big Jim" Folsom during a campaign event in 1946. He also would bring a bucket and mop to campaign events, vowing to clean up state government. The bucket was used to collect campaign donations.

Courtesy of the Alabama Department of Archives and History

The allegations of sexual misconduct made against Roy Moore, the Republican candidate for U.S. Senate, may have been surprising and even shocking to those who aren't familiar with politics in Alabama. But the state's political history is littered with episodes mixing sex and power in unseemly ways.

One of the first notable cases is John Winston. The former state senator was elected governor in 1853, six years after killing a doctor who was his wife's lover, in a duel. More recently, Gov. Robert Bentley resigned in April 2017 after a sex scandal and cover-up attempt involving one of his aides.

But one of the most notable politicians to face a scandal that rivals Moore's is "Big Jim" Folsom, a former Democratic governor who served two non-consecutive terms in the 1940s and 50s. 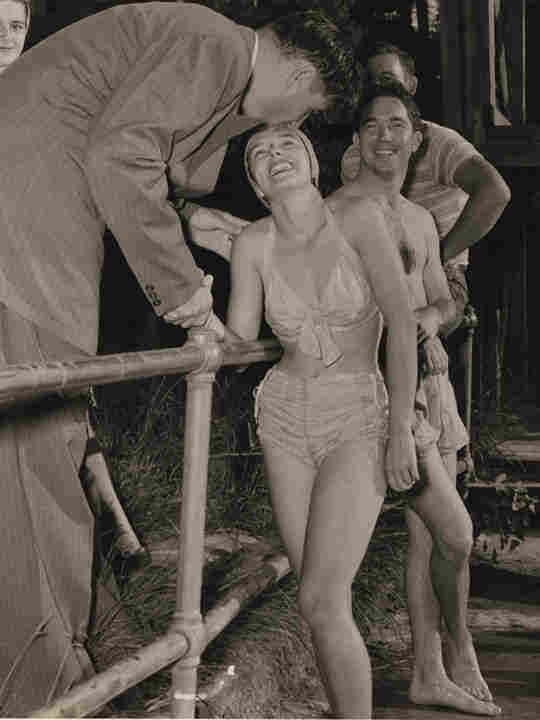 Jim Folsom kissing a woman in the 1940s. Courtesy of Alabama Department of Archives and History hide caption

toggle caption
Courtesy of Alabama Department of Archives and History 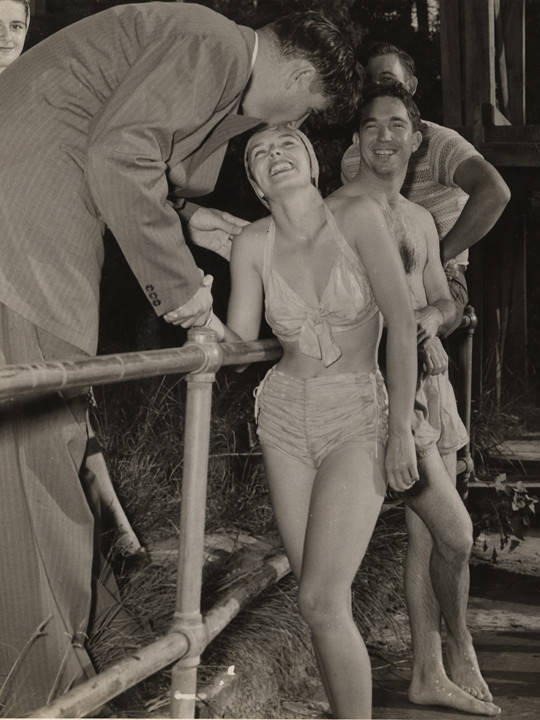 Jim Folsom kissing a woman in the 1940s.

Courtesy of Alabama Department of Archives and History

Retail politics played a major role in Folsom's career, as it does in Moore's. Folsom toured the state with a hillbilly band called the "Strawberry Pickers" and brought a mop and bucket on stage to let voters know that if elected, he would "clean out the capitol." He later collected donations in the bucket.

In a move reminiscent of Moore's appeal to evangelical voters, Folsom commissioned a campaign ballad with the lyrics: "What do you, pray? Big Jim Folsom's gonna be governor again!"

While Moore has strenuously denied the charges against him, Folsom completely embraced being called a womanizer.

In the press, Folsom became known as "Kissing Jim" in part because of a publicity stunt in 1948 when he kissed 100 models in New York City who had voted him "The Nation's Number One Leap Year Bachelor." The event attracted 2,500 onlookers and caused a traffic jam.

Among Folsom's other claims was that he had kissed "50,000 of the sweetest mouths in Dixie" and that he had "started with the 16-year-old ones and worked up from there."

In yet another memorable instance, Folsom is said to have complained that his opponents were setting political traps for him. "If they bait a hook with whiskey and women, they'll catch Big Jim every time." 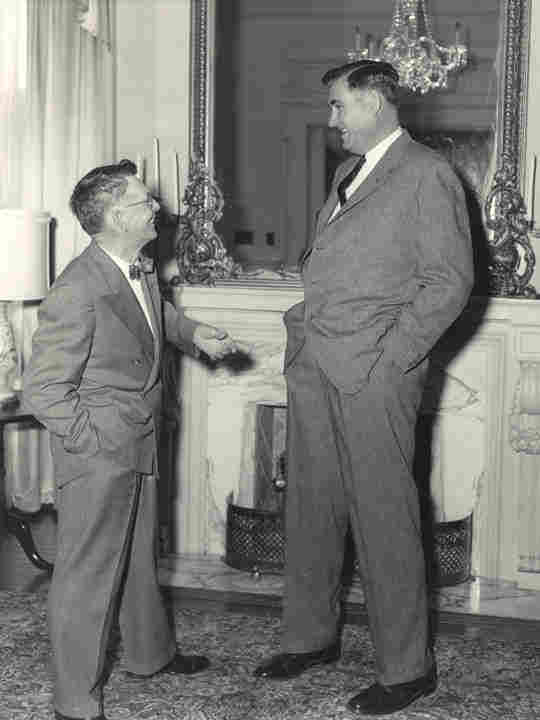 toggle caption
Courtesy of the Alabama Department of Archives and History 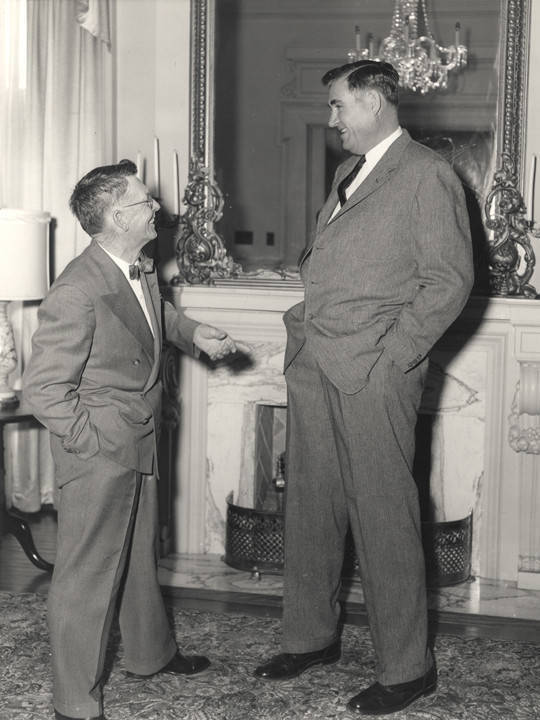 Courtesy of the Alabama Department of Archives and History

The scandal that threatened to derail his political career came in the second year of his first term. A former hotel cashier from Birmingham filed a paternity suit claiming that Folsom was the father of her son. Nine days later, Folsom staged the kissing event in New York City and then he got married, which helped to silence his critics and settled the lawsuit.

Then Folsom did something that would seemingly kill any political career and admitted he was the father of the cashier's son. Pundits wondered if Folsom would win re-election the next time he was eligible (consecutive terms in Alabama weren't allowed at the time).

But to everyone's surprise, at least to everyone who didn't live in Alabama, Folsom was easily elected to a second term in 1954. Why? Political commentator Steve Flowers points to the same reason that Roy Moore may win: Alabamians hate being told how they should vote by anyone who doesn't live in the state.

Historian Wayne Flynt points to the state motto, "We Dare Defend Our Rights" and argues it's baked into the consciousness of the state's citizens, especially when Alabamians are mocked for being "backwards." 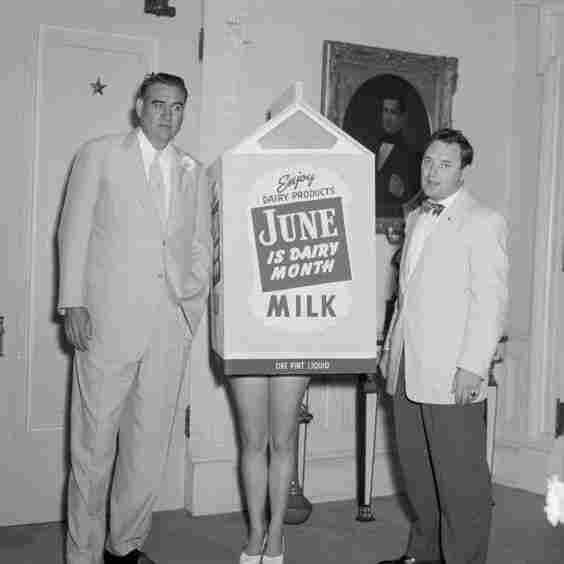 Folsom with the "Dairy Girl" in 1944. Alabama Department of Archives and History hide caption

"If sophisticated, better educated cultures that are less evangelical make fun of you and your people you react with a 'bunker mentality," says Flynt.

When it comes to issues of sexual morality, Flynt argues Alabamians are actually of two minds.

Folsom's third bid for governor in 1962 ended with a loss to yet-another populist politician, George Wallace. Folsom's defeat was said to be due to a disastrous appearance on television in which he appeared to be drunk. Folsom later claimed that he had been drugged.

Although Big Jim's career faded after that election, his son, Jim Folsom, Jr., went on to become a force in state politics and was elected twice as lieutenant governor. "Little Jim," as he is known, became governor in 1993 after the incumbent resigned due to a corruption scandal and served in that post for nearly two years.