Accessibility links
In Effort To Court Drivers, Lyft Offering Education Discounts Lyft is offering education benefits, a move aimed at recruiting and retaining drivers in its competition with Uber. But it raises a question about what these companies owe their workforces. 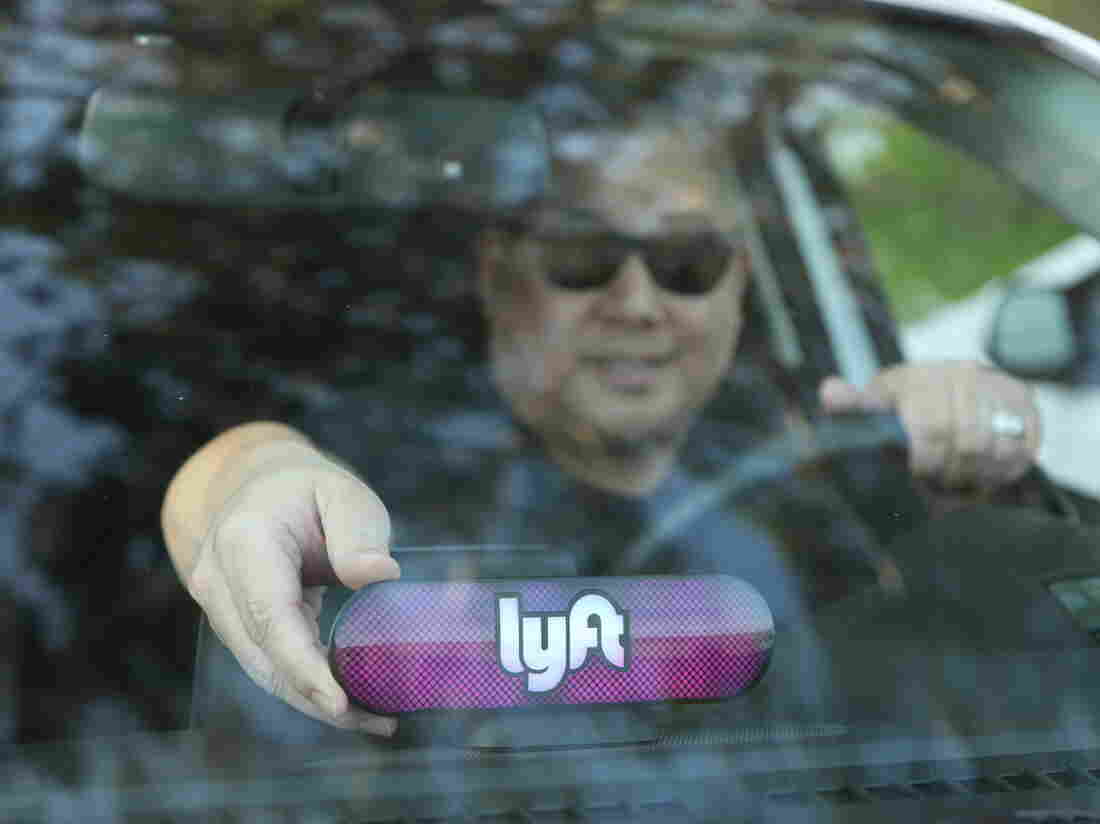 A Lyft driver places a company emblem on his dashboard Jan. 31, in San Francisco. Lyft announced it's offering education benefits, a move aimed at recruiting and retaining drivers in its competition with Uber. Kelly Sullivan/Getty Images for Lyft hide caption 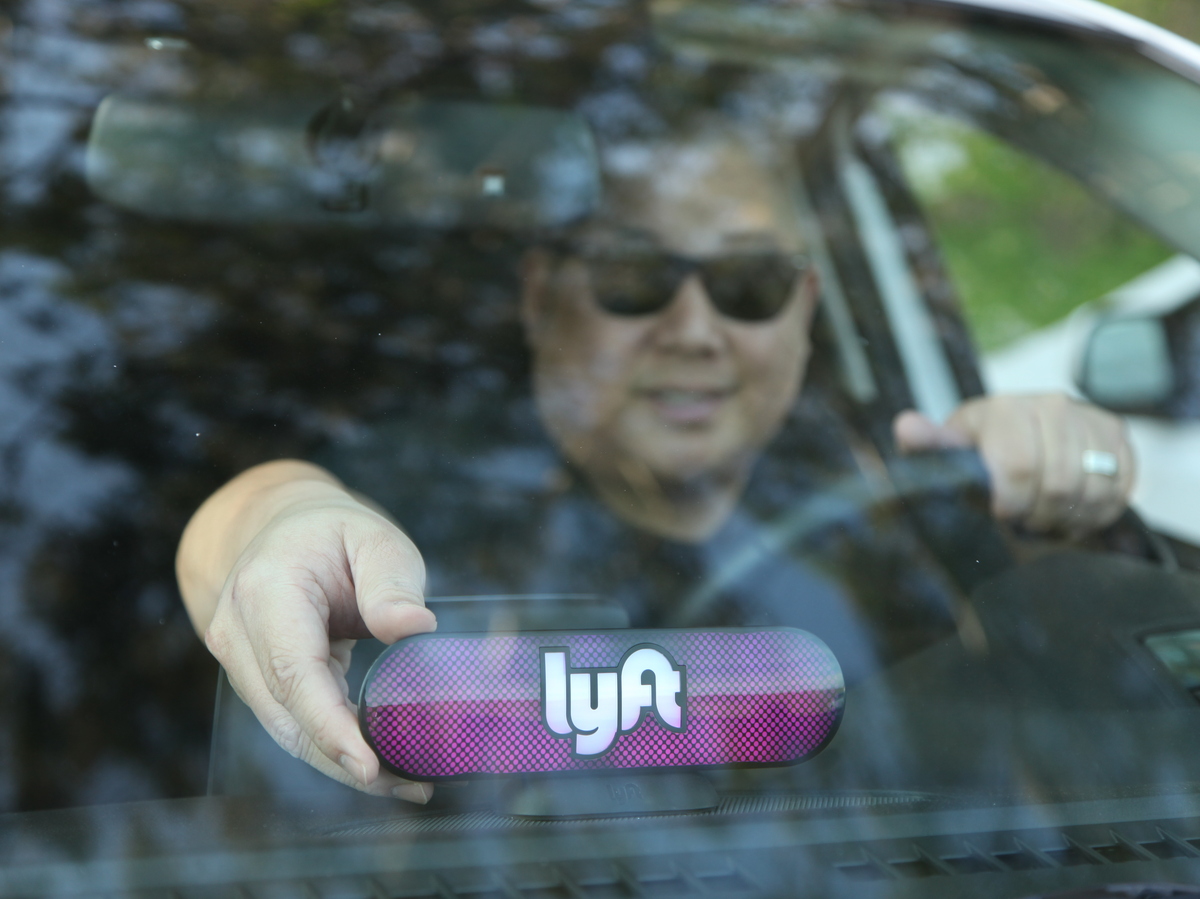 A Lyft driver places a company emblem on his dashboard Jan. 31, in San Francisco. Lyft announced it's offering education benefits, a move aimed at recruiting and retaining drivers in its competition with Uber.

Lyft is unveiling a new education program for drivers, offering access to discounted GED and college courses online. The move is an interesting experiment in the gig economy, where a growing class of workers receive zero benefits from a boss and yet competition for their time is fierce.

Many Lyft drivers see their work for the company as a stopgap measure, a flexible way to make money while they try to build a career.

Shanae Watkins, a driver based in Baltimore, would like to become a social worker. She is currently working on her bachelor's in psychology through online classes. "It's better that way with my kids," she says. "I can drive or study while still being present at home when they need me."

Watkins drives for Uber, Lyft, GrubHub and Amazon Flex and, she says, she does not have loyalty to any specific gig company.

"I turn on the apps and see where the demand is," she says. But, she says, if one of them offered help with the cost of school, that could move her to shift her loyalties.

That is the bet that Lyft is making in this new pilot program with Guild Education. The Denver-based startup connects workers to courses provided by nonprofit online schools.

Lyft drivers will receive tuition discounts ranging from 5 percent to 20 percent and, according to the company, the average driver working with Guild to earn a degree can save up to $4,220 per year.

Drivers can take English as a second language and GED courses, as well as earn an associates, bachelor's or master's degree online in subjects including IT, nursing, social work, occupational therapy and business.

Lyft would not disclose how much the program will cost the company. According to a Lyft survey of drivers to be published next month, 47 percent do not have a college degree.

Gabe Cohen, general manager for Lyft in Denver, says internal surveys show that drivers want to earn degrees. This move serves that goal, as well as the startup's business interests.

"It is important that drivers feel loyalty to Lyft," Cohen says.

There is fierce competition for drivers in the ride-hailing industry. Companies pour money into marketing budgets, placing ads on billboards and popular radio stations in an effort to recruit.

This new education benefit could be a more effective tool and even prompt the largest ride-hailing company, Uber, to do the same. In response to pressure from drivers who pointed out that Lyft offered in-app tipping, Uber started offering the feature this summer.

To qualify, a driver must have completed 10 rides for Lyft in the current or previous quarter, and then 10 rides per month.

"It is a low bar," says Zoe Weintraub, who directs sales and corporate partnerships at Guild.

Turnover among the hourly workforce is notoriously high. Lyft is the first company in the gig economy to offer these education benefits to its drivers.

Guild's other clients include the fast-food chain Chipotle which, Weintraub says, has seen a clear benefit to retention: 98 percent of the employees who enrolled in its education programs stayed with the company over a 90-day period.

Uber Loses Appeal In U.K. As Tribunal Reiterates That Drivers Are Workers

David Weil, dean at Brandeis University's Heller School of Social Policy and Management, is not impressed. Weil, who was in charge of investigating companies that misclassify workers under the Obama administration, describes the move by Lyft as strategic, but not generous.

Lyft and Uber are fighting in courts against claims that drivers are employees entitled to benefits like paid sick leave and health care.

"The ride-hailing companies can't erase the fact that their business models are having drivers do all sorts of things an employee would do," Weil says. To offer training is "really nice" but it doesn't mean Lyft should "be rewarded by having the other responsibilities removed," he says.

Lyft audited the pilot program to assess if it exposes the company to new legal claims that workers are employees, not independent contractors. A spokesperson says in-house lawyers determined it does not because only benefits that serve as compensation — such as paying a health care premium or matching a 401(k) — could put the "independent contractor" status in jeopardy.

(Note: Lyft is an NPR sponsor.)