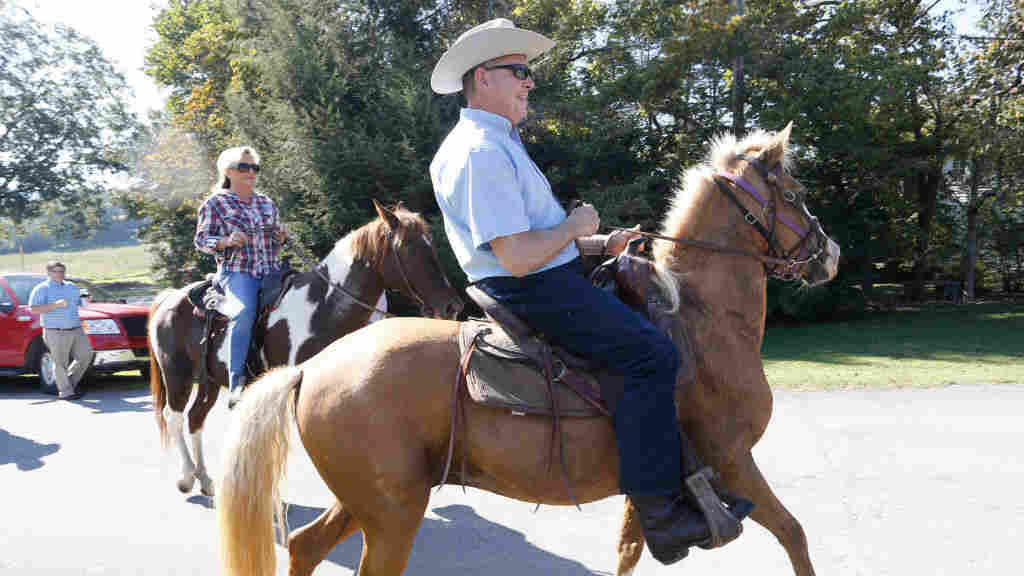 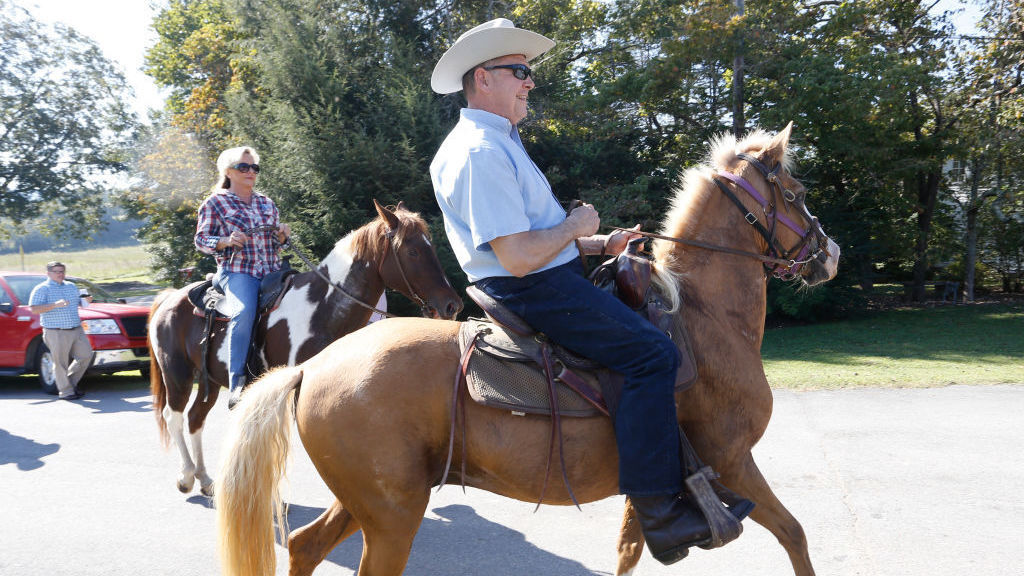 Alabama Republican Senate candidate Roy Moore and his wife, Kayla, ride their horses to vote in the GOP primary runoff earlier this year.

"Unprecedented" is a term that was thrown around a lot to describe the crazy 2016 presidential election. Now, the Alabama Senate race may be giving that campaign a run for its money.

The appointment of Luther Strange to succeed new Attorney General Jeff Sessions had occurred under a cloud of suspicion, with then-Gov. Robert Bentley tapping Strange — the state attorney general who had been investigating Bentley for using his office to cover up an extramarital affair.

Now, the end of the race culminates not in Strange as the GOP nominee but in Roy Moore — easily one of the most controversial figures in Alabama politics even before this race — as the Republican standard-bearer who has been beset by allegations of sexual misconduct and sexual assault.

Moore looked dead in the water when the accusations — which he stringently denies — surfaced a month ago. Multiple women have alleged that he pursued them romantically as teenagers decades ago when he was in his 30s, including one woman who said Moore initiated sexual contact with her when she was just 14.

Other recent accusations of sexual misconduct have resulted in three members of Congress resigning last week, with at least two more lawmakers still on the hot seat facing allegations and questions. Even if he wins, Moore could face an ethics investigation and calls from within the ranks of Senate Republicans not to seat him.

Nonetheless, Moore's poll numbers appear to have rebounded, and the Republican probably has even a very slight edge heading into Election Day on Tuesday, according to observers in the state. And while national GOP leaders began to abandon him in droves initially, President Trump embraced him last week with a full-on endorsement. The Republican National Committee soon followed, reinstating its financial support for Moore.

A win by Democratic nominee Doug Jones in Alabama — a state that Trump won by almost 30 points just last year — once looked unthinkable. Then, a Moore victory, after multiple women came forward to accuse him of sexual impropriety against them when they were teenagers, similarly seemed impossible.

Polls in the race have been all over the place, with turnout in a special election during the year-end holiday season hard to measure. Add in the latest dose of uncertainty, which is nearly impossible to measure or predict — whether Republicans will stay home or enough African-American voters will go to the polls to help Jones — and it's anyone's best guess how this wild ride will end for a seat that's important as Republicans try to pass a tax overhaul and other GOP priorities in a closely divided Senate with the 2018 midterms less than a year away.

Here are just a few of the factors that have added uncertainty and often flat-out "what in the world is happening?" reactions to this race.

How we got here: from one sex scandal to another

This contest wasn't even supposed to have happened until 2018 if not for another sex scandal that prompted its rescheduling. When Bentley stepped down after allegedly using his office to cover up an affair with an aide, new Alabama Gov. Kay Ivey moved up the election to 2017.

After Bentley resigned, his appointment of Strange — who was investigating wrongdoing by the then-governor — became a political hot potato. The appearance of some sort of quid pro quo, even though Strange denied it, was the biggest factor that led to his loss to Moore in the GOP primary runoff, according to multiple Republicans in the state. Not even millions of dollars spent by national GOP groups and a superPAC aligned with Senate Majority Leader Mitch McConnell, R-Ky., could save Strange.

Republicans in Washington, D.C., certainly weren't thrilled that they now had Moore, who had long been a polarizing political figure in the Yellowhammer State, as the GOP nominee. The former Alabama Supreme Court chief justice had been well-known for years for his Christian nationalist stances, including refusing to remove a Ten Commandments monument he'd had erected in the state judicial building, his hard-line comments on same-sex marriage and transgender rights, and more recently his suggestion that the last time America was "great again" was when there was slavery.

Still, even given Moore's political baggage, most people didn't expect that the general election would turn so, well, strange in the end.

Flood of accusations against Moore

It all started on Nov. 9, when the Washington Post published a bombshell account from Leigh Corfman, who detailed how Moore — then a 32-year-old district attorney — pursued her romantically when she was 14. Corfman said during one meeting Moore removed his clothes, took off her top and pants, and then "touched her over her bra and underpants, she says, and guided her hand to touch him over his underwear." Corfman said she then asked Moore to take her home, which he did. (She would later appear on NBC's Today to discuss her allegations.)

Corfman's story was only the beginning, as nine women in total came forward saying Moore had pursued them romantically when they were teenagers. Some media outlets even reported that he had been banned from the local mall in Gadsden, Ala., in the late 1970s, apparently out of concerns he was paying excessive attention to the teenage girls who worked and hung out there. Moore's campaign quickly took issue with those reports.

Moore and his allies pushed back hard against the flood of accusations against him — but in some surprising and questionable ways. Some even argued that the age gap between Moore and the girls wasn't necessarily wrong.

"Take the Bible. Zachariah and Elizabeth for instance. Zachariah was extremely old to marry Elizabeth and they became the parents of John the Baptist," Alabama State Auditor Jim Zeigler told the Washington Examiner. "Also take Joseph and Mary. Mary was a teenager and Joseph was an adult carpenter. They became parents of Jesus."

Moore went on Fox News host Sean Hannity's radio show — typically a very friendly venue for Republicans — the next day to rebut the charges further. Instead, he ended up doing more damage. When Hannity asked Moore if he had ever dated 16-, 17- or 18-year-olds, his answer wasn't a flat-out denial initially. Instead, he said "not generally, no" and said that dating a girl in her late teens "would have been out of my customary behavior."

"I don't remember dating any girl without the permission of her mother," Moore also added. Finally, Moore gave a more forceful denial, saying that dating a teenage girl would have been "inappropriate."

As the weeks went on, it seemed clear there were still plenty of doubts in the minds of voters as to the veracity of the accusations. To others, even if they did believe there was some truth to the women's stories, it was worth voting for Moore anyway because he would vote right on social issues such as abortion.

A focus group done by GOP pollster Frank Luntz recently and aired on Vice News Tonight showed that some conservative Alabama voters thought the women making the accusations were being paid. And others said that even if Moore had tried to date teenage girls decades ago, that was perfectly acceptable at the time anyway.

The embattled Moore has appeared infrequently in public since the allegations against him were reported, and when he has, he has refused to take questions from the media about the accusers after that Hannity interview. His campaign has held occasional "press conferences" to try to discredit some of the allegations of the women who had come forward, but even then representatives of the campaign haven't taken questions.

Instead, Moore has embraced a decidedly Trumpian strategy — shift the blame. The D.C. establishment — including both Republicans and Democrats — have long been out to get him, Moore told his supporters. That's why "swamp creature" McConnell had spent so heavily to defeat him in the primary and failed. Now, there was a coordinated effort to make sure he didn't make it to the U.S. Senate, in Moore's view.

"I think they're afraid I'm going to take Alabama values to Washington, and I can't wait," Moore said at the end of a campaign rally last Tuesday alongside former Trump chief strategist Steve Bannon. The Breitbart News chief has used his website's considerable influence among conservatives to boost Moore and discredit the accusations against him.

Eventually Trump, too, would buy into that argument, casting doubt on Moore's accusers. "He totally denies it," the president said before leaving the White House for Thanksgiving. And he echoed another refrain Moore has hammered home — these accusations are from 40 years ago, so why would the women be coming forward now?

It wasn't until last week that Trump would remove any doubt that he was 100 percent behind Moore. And while he didn't outright campaign for Moore, he did the closest thing he could — holding a campaign rally Friday night just about 20 miles from the Alabama border in Pensacola, Fla., that falls within the Mobile, Ala., media market.

Trump made only a passing mention of the race but did seize upon the news of the day that one Moore accuser, Beverly Young Nelson, had admitted to adding a note to a yearbook inscription she said proved she knew Moore 40 years ago, something she offered in support of her allegation that Moore sexually assaulted her back then. Amid a fresh round of attacks on her credibility, Nelson maintains that Moore's signature and the personal note written to her in the yearbook were penned by Moore.

Fundamentals favor Jones, but will it matter?

Jones, the former U.S. attorney who once prosecuted KKK members for a high-profile crime against African-Americans during the civil rights movement, has the type of profile that may appeal to some moderate voters and could motivate black voters in the state. 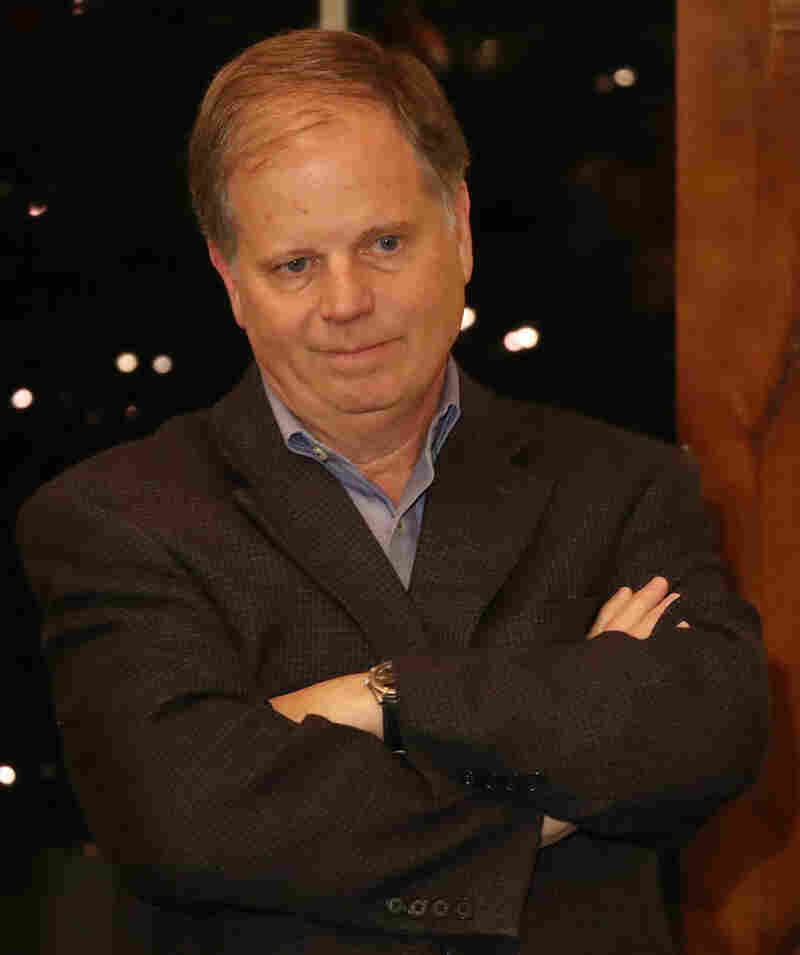 And, as NBC News noted, Jones' campaign has outspent Moore by a 10-1 margin and has an active get-out-the-vote operation. Moore's campaign has been a skeleton operation in the final stretch, with rare appearances and minimal staff.

But in 2016, Trump's campaign was derided in much the same way, and it was assumed that his controversial remarks, sexual assault allegations and a tape in which he bragged about groping women would be his downfall. That's not to mention the money advantage that Hillary Clinton had over the GOP nominee who had already divided his party.

So, to end what's been a tumultuous few political years, perhaps it should be less than surprising that the Alabama Senate race seems headed for a crazy, unbelievable finish.

A previous version of this story incorrectly said that Leigh Corfman had taken off her top and pants during an encounter with Roy Moore. It was Moore who removed the clothing, according to Corfman's account of what happened.