Accessibility links
Rollicking 'Star Wars: The Last Jedi' Finds Nuance In The Force Writer/director Rian Johnson joins the Star Wars franchise to deliver a chapter that's fast, fun and freewheeling, even as it introduces surprising nuance to the classic Dark Side vs. Light Side beef. 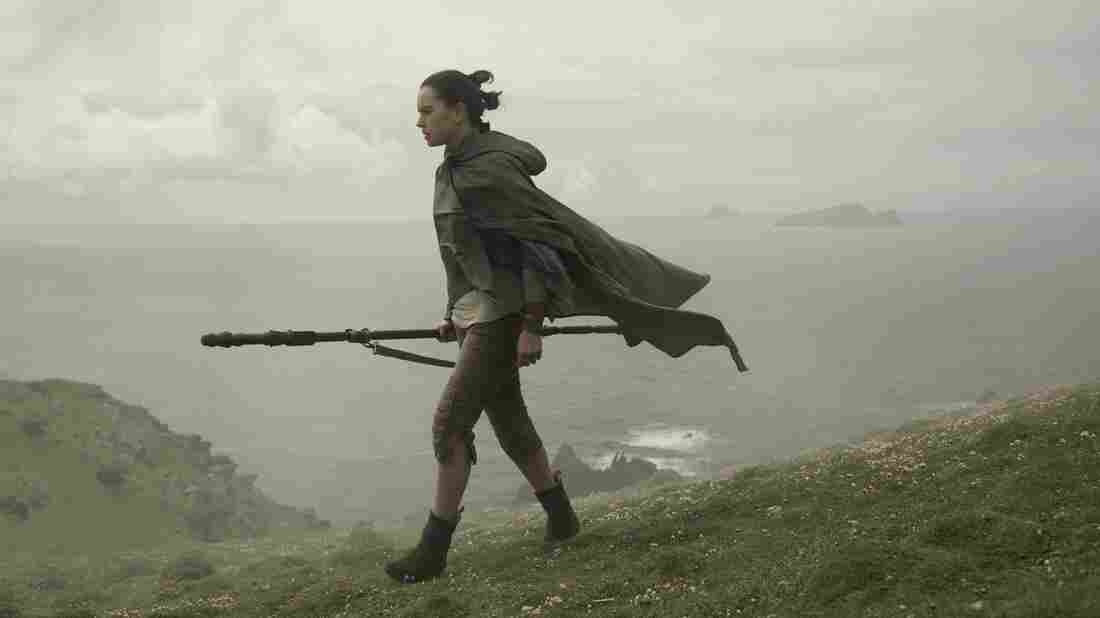 Rey (Daisy Ridley) may or may not be the title character of Star Wars: The Last Jedi. We're not telling. Jonathon Olley/Lucasfilm hide caption 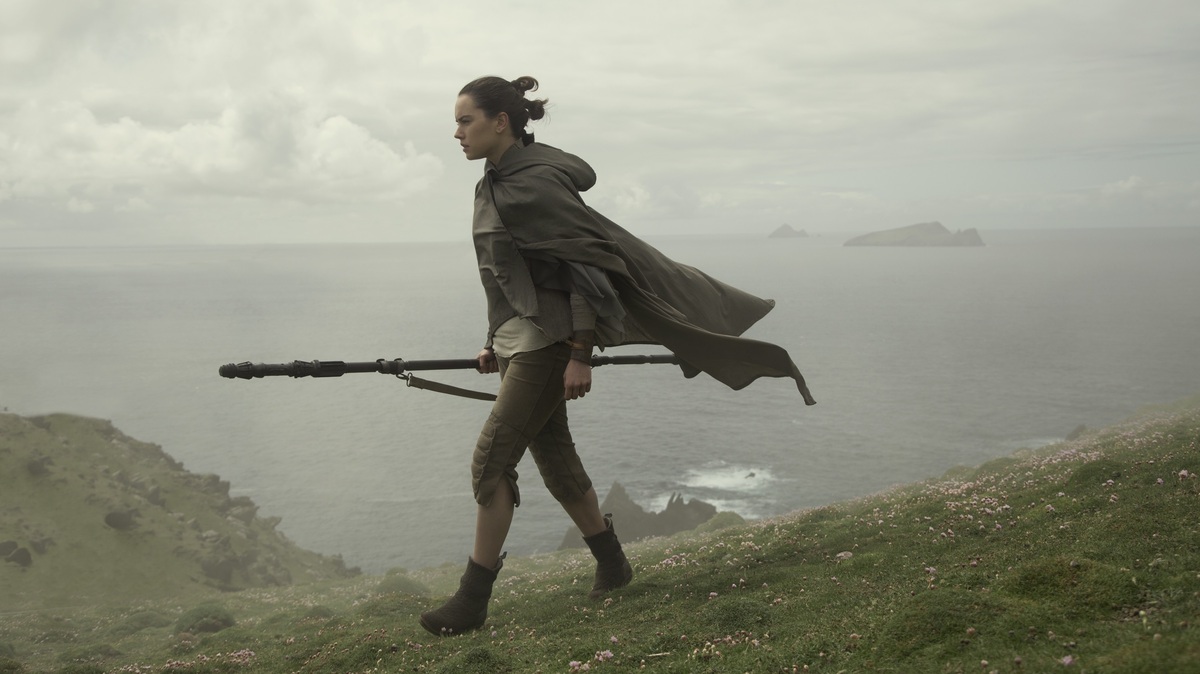 Rey (Daisy Ridley) may or may not be the title character of Star Wars: The Last Jedi. We're not telling.

Star Wars: The Last Jedi and What's Making Us Happy

Star Wars: The Last Jedi and What's Making Us Happy

If they are to successfully make the jump to light speed, Star Wars movies require a precisely calibrated fuel mixture: one-third epic space battles, one-third narrow escapes and duly buckled swashes, one-third hooded beardy dudes standing around looking pained while solemnly intoning the cheesiest hokum about Darkness and Light as if it's Hamlet's Yorick speech (which in a way, it is).

Rian Johnson, director and writer of Star Wars: The Last Jedi (aka Episode VIII, aka The One Without Any Big Round Thing That Needs To Get Destroyed By Exploiting A Weakness In Its Design, Thank God) knows how vital each of those bedrock elements prove, and he has struck upon precisely the right alchemical formula without making a franchise film that feels formulaic. The Last Jedi is fun and fast, rollicking and suspenseful. It supplies us with all the things we expect — nay, demand — in a Star Wars movie, and manages to surprise us by revealing that this fictional universe, in which we've already clocked so many hours, can still surprise us.

To do so, Johnson supplies two fuel additives to the existing mix. One, he leans into the sly, knowing sense of humor that was present in the original trilogy ("I love you." "I know."), but that got dumbed way, way down in the prequels ("How wuuuude!") and forcefully reawakened in J.J. Abrams' Star Wars: The Force Awakens ("Who talks first? Do you talk first or do I talk first?"). The Last Jedi is both jokier and funnier (two very different things) than The Force Awakens — there's a solid conference call bit in the first reel, for example, and later a very clever throwaway visual gag destined to join Raiders of the Lost Ark's "interrogation device or coat hanger?" sequence, in the admittedly tiny Cinematic Conflations of Torture and Clothing-Care Hall of Fame.

The other thing Johnson introduces is something that the various Star Wars offshoots (novels, games, animated series, etc.) have explored, but that has been assiduously kept out of the main series' simple, rigorously Manichean Dark Side vs. Light Side infrastructure: grayscale. There is a welcome attempt, in The Last Jedi, to depict characters and their motivations in less stark and increasingly nuanced terms. This is both smart and inevitable, for a franchise that has hung around long enough for its themes and plot-beats to become as pervasive as these have. Yes, sure: Joseph Campbell, monomyth, Good and Evil, blah blah blah. These films do require a stark, easily apprehensible symbolic underpinning — but they also need to work as films, and that means having characters whose every choice we won't see coming, whose behaviors are not dictated by the color of their space-couture. In The Force Awakens, Adam Driver's Kylo Ren was evil, but (we were told, repeatedly) conflicted; here, he's conflicted, but evil — and this time we see and feel him struggle. (When he is not lashing out at underlings, or elevators — long story — Driver's Ren is amusingly albeit chillingly understated; he is your Bad Space Boyfriend, forever space-gaslighting you.)

Fine, but what is it about? I'll keep things vague, but I can say that the bulk of the film is taken up by what is essentially a slow-speed chase — the tiny Resistance fleet, led by Gen. Leia Organa (the late Carrie Fisher), struggles to outrun the eeeeevil First Order, led by Gen. Hux (Domhnall Gleeson, reveling in sniveling). Along for the ride: Kylo Ren and his master, Supreme Leader Snoke (a CGI creation voiced by Andy Serkis), who turns out to be more given to swanning around the joint in a gold lamé kaftan than we had perhaps been led to expect. This is not a complaint.

Everyone who was around when the Force got so rudely awakened is back, though they promptly get sorted into different plot threads. This time around, Poe (Oscar Isaac) proves himself as much a hothead as a hotshot. Ex-Stormtrooper Finn (John Boyega) gets paired up with Resistance backbencher/fangirl Rose (Kelly Marie Tran) on a mission that goes on a wee bit too long but that provides the film with the closest thing it gets to a vaguely political point of view — and another opportunity to underscore its emerging theme of moral relativism.

And of course, there's Rey (Daisy Ridley), stuck on a gorgeous, remote, windswept island with Luke Skywalker himself (Mark Hamill), who is locked into the mode of Gruff Reluctant Mentor. Rey must implore him to teach her the ways of the Force, and he must refuse, until he doesn't, because even a long time ago, in a galaxy far, far away, there must have been kung fu movies that taught everyone the rhythm of these things.

It's a testament to Johnson and his editor, Bob Ducsay, that a film so loaded with characters and storylines can feel as sleek and propulsive as this one. There is a moment at about the movie's midway point when all of its different threads reach a violent turning point. As we jump between them, their disparate events seem to layer atop one another, each cut increasing in pace and intensity until the shattering payoff(s); it's a mini-master class in storytelling, and the movie is not near done with us.

Everyone gets a hero moment, a scene that showcases their respective, resplendent badassery, even, especially, Fisher's Leia — though hers does seem to belong to a wholly different film franchise (you'll know the one).

Many of the questions raised in The Force Awakens receive their answers here — some with a very decisive, and surprising, finality. It will likely leave you wondering where the franchise is headed next — and that, in and of itself, in a film series that has gone on this long, filled with characters who wear black because they are capital-e Evil, is a bracingly positive turn of events that will send you from the theater filled with a new hope.