Accessibility links
'Ferdinand' The Peaceful Bull Gets His First Full-Length Film In 1936 the book, The Story of Ferdinand, was published. Two years later, Disney turned it into an Oscar-winning short film. Now, the beloved story has gotten its first major movie adaptation. 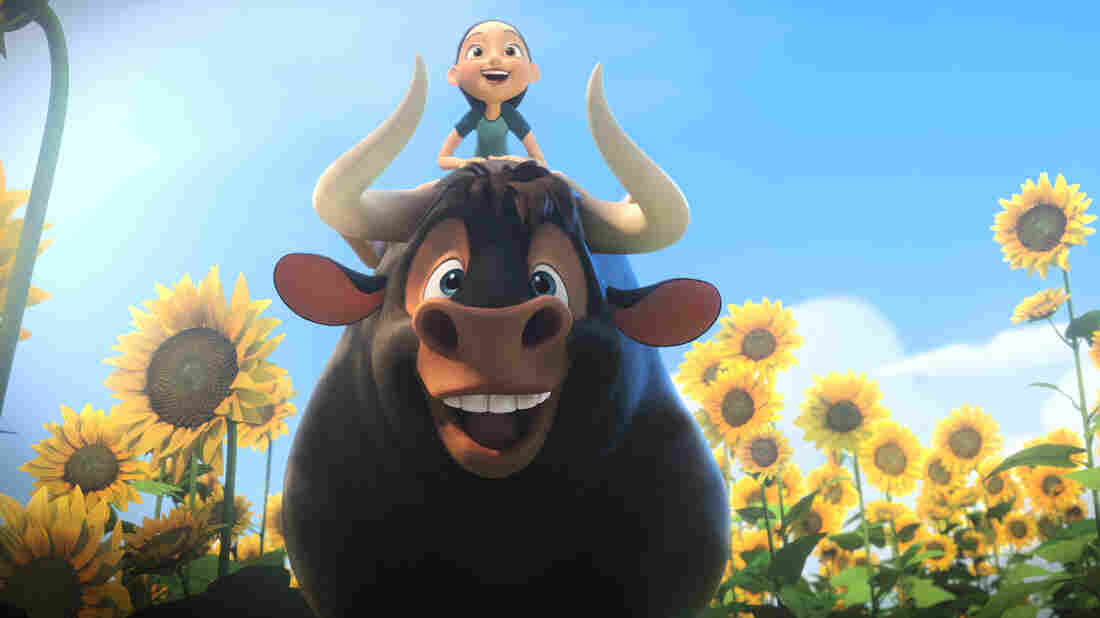 Millions of people have read Munro Leaf's The Story of Ferdinand since it was first published in 1936. Two years later, Disney turned it into it an Oscar-winning short film. Now, the peaceful bull who prefers sniffing flowers to bullfighting is getting an update from 20th Century Fox. And that bull has been on quite a journey to get here.

John Cena, the actor who voices Ferdinand in the new movie, recently read the original story to hundreds of DC public school kids at the Library of Congress. On a table next to him were two early editions of the book from the library's collection. One was from 1938, the other from 1936.

"We're going to look at the 1936 edition but not touch it," Cena told the students. "It's very delicate and very important, and the people from the Library of Congress were very thorough in saying like, 'Hey, don't touch the first book.'"

Precious Ferdinand, even when he grows to be bigger than all the other bulls, still doesn't want to fight. He just wants to sit under the cork tree and smell flowers. But when he sits on a bumblebee, he goes berserk, puffing and kicking. The matadors watching are ecstatic.

The Story of Ferdinand is one of Time magazine's "100 Best Children's Books of All Time." At one point in the late 1930s, it was outselling Gone With The Wind, which is pretty astonishing for something that was written in less than an hour.

NPR interviewed Munro Leaf's widow, Margaret, in 1986, ten years after her husband's death. "The depression was nearly over," she recalled. "We were very poor." One Sunday afternoon, she was reading a manuscript for a publisher to make some extra money.

"I was going to get $25 for reading it, so it was very important, and he kept bothering me, trying to interrupt me. So I finally said to him, 'Get lost, go and amuse yourself. Do something.' About 35 to 40 minutes later, he said 'Listen to this,' and he read me Ferdinand. And there it was in pencil on six sheets of yellow legal pad."

Leaf gave the story to his friend, illustrator Robert Lawson, who brought it to life with detailed, whimsical, pen and ink drawings. The book took off.

There was the Disney short, Ferdinand merchandise, a balloon at the annual Macy's Thanksgiving parade, songs and author interviews.

In 1948, Leaf talked to the Chicago radio show, The Hobby Horse Presents. Children on the show asked him what books he read when he was ten and a half.

"Oh gee, I read everything I could get my hands on really," he said. "Couple of them I know that I read about that time that stand out as vividly today, and that's Treasure Island was one, and The Wizard Of Oz to me was one of the nicest books I ever found." 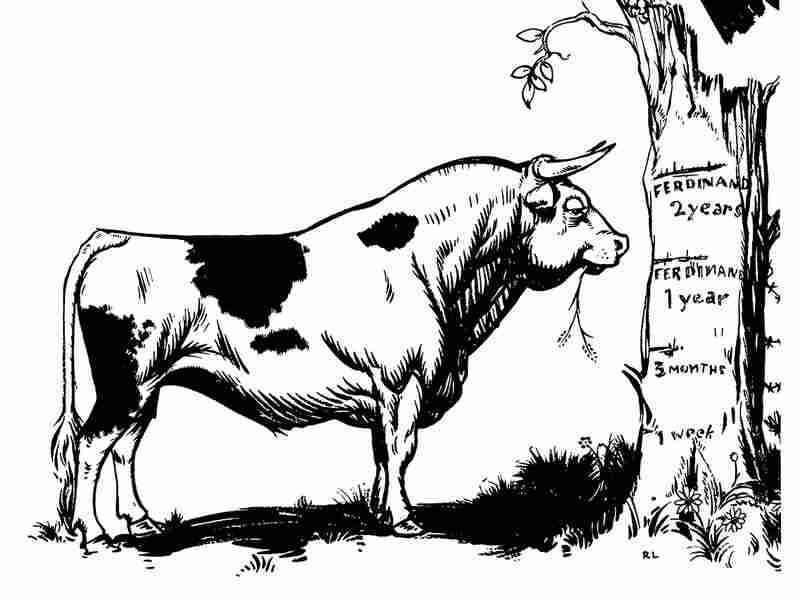 In the late 1930s, The Story of Ferdinand briefly outsold Gone With The Wind. Penguin Young Readers hide caption 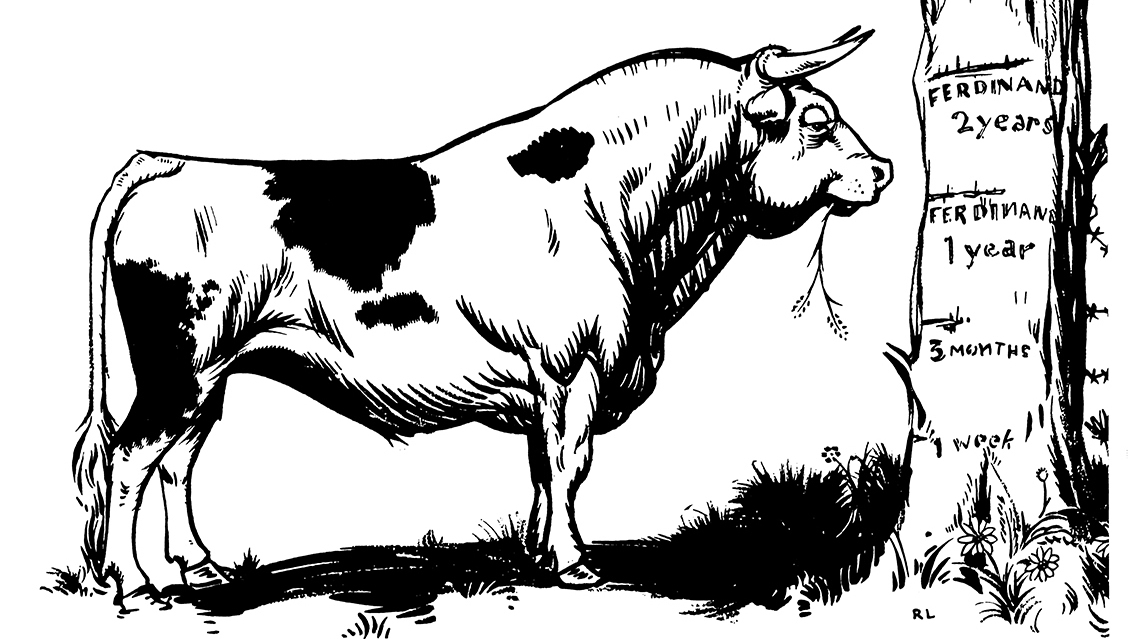 In the late 1930s, The Story of Ferdinand briefly outsold Gone With The Wind.

The book's popularity coincided with the Spanish Civil War. In 1937, Leaf told an audience he received letters complaining that "Ferdinand was red propaganda," others that "it was fascist propaganda." A woman's club said it was "unworthy satire of the peace movement." It was banned in Spain; Hitler burned it.

But Margaret Leaf told NPR that Munro wasn't trying to be political. "He wasn't a pacifist, but he was a peaceful man," she said.

Director Carlos Saldanha is the latest to interpret Ferdinand, in the new feature film adaptation. "I think Ferdinand is this misinterpreted, misjudged character," he says.

Munro Leaf's story is only about 800 words, so with the Leaf family's permission, Saldanha did some fleshing out. The director created new characters, like a goat who lives in Ferdinand's stall, and he gave voices to the other bulls in Munro Leaf's story. When they're young, they make fun of Ferdinand's refusal to butt heads. And then Ferdinand outgrows them.

"He is trying to show them a different side of life, a different understanding of life," Saldanha says. "And for him, you don't really need to fight to be a fighter."

For the voice of Ferdinand, Saldanha picked someone who fights for a living, a 6'1, 251 pound wrestler with the WWE — John Cena.

Make Way For Celebration: These Ducklings Are Turning 75

"He almost represents, visually, Ferdinand," Saldanha tells NPR. "Like he's so big and massive and people interpret him as this massive guy that picks fights and all this stuff but actually he's not at all. And he's super gentle."

Cena confirmed that he's misjudged for his size. He says it's a universal feeling. "There isn't a human walking the earth that [can] say 'Everybody gets me all the time.' That's why I think, another reason the book is timeless. We're all misunderstood."

Munro Leaf died in 1976. He wrote other books, but none that had the global success of Ferdinand. His son, Andy Leaf, says his father was amused by all of the different interpretations. "He was very smart that way. He just let people interpret it as they wished."

In the end, Ferdinand stays true to himself, sitting under his favorite cork tree, smelling the flowers quietly. Ferdinand, the movie version, comes out later this week, but the book will likely be around forever.

This story was edited for radio by Andrew Limbong and Rose Friedman, and adapted for the Web by Sydnee Monday and Petra Mayer.