Accessibility links
White House Insists Trump Tweet Wasn't Sexist. Female Senators Disagree In a statement on Twitter, Trump said Democratic Sen. Kirsten Gillibrand "would do anything" for campaign contributions. This was apparently a response to Gillibrand's call for Trump to resign. 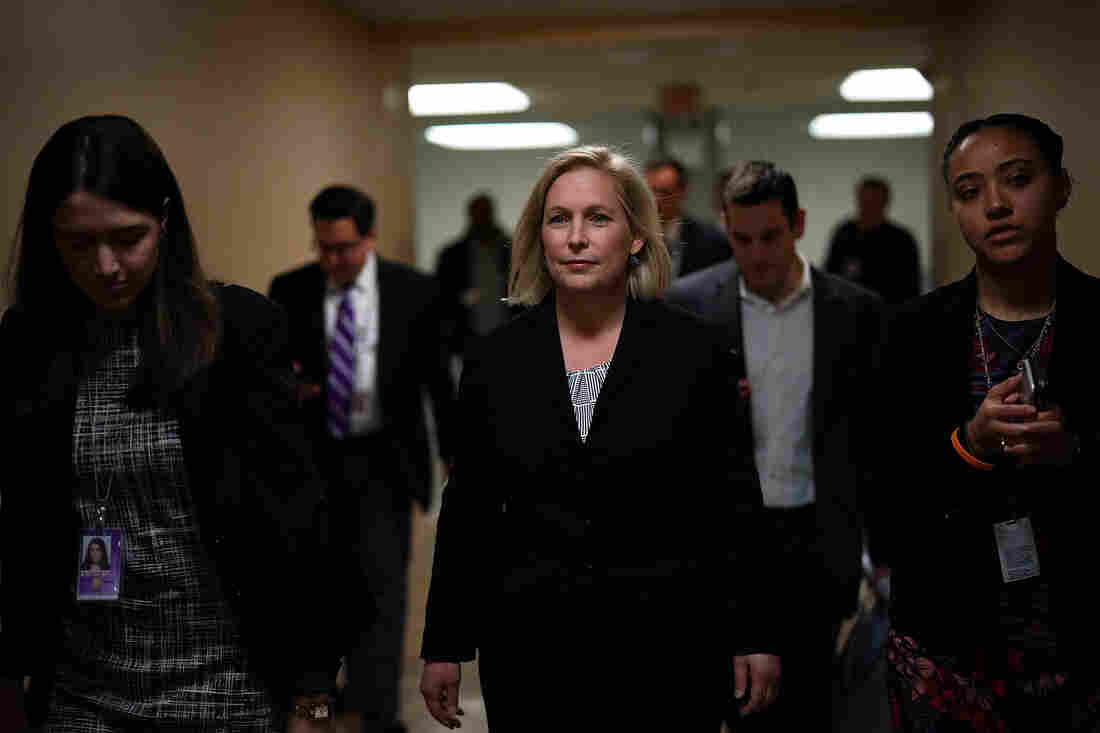 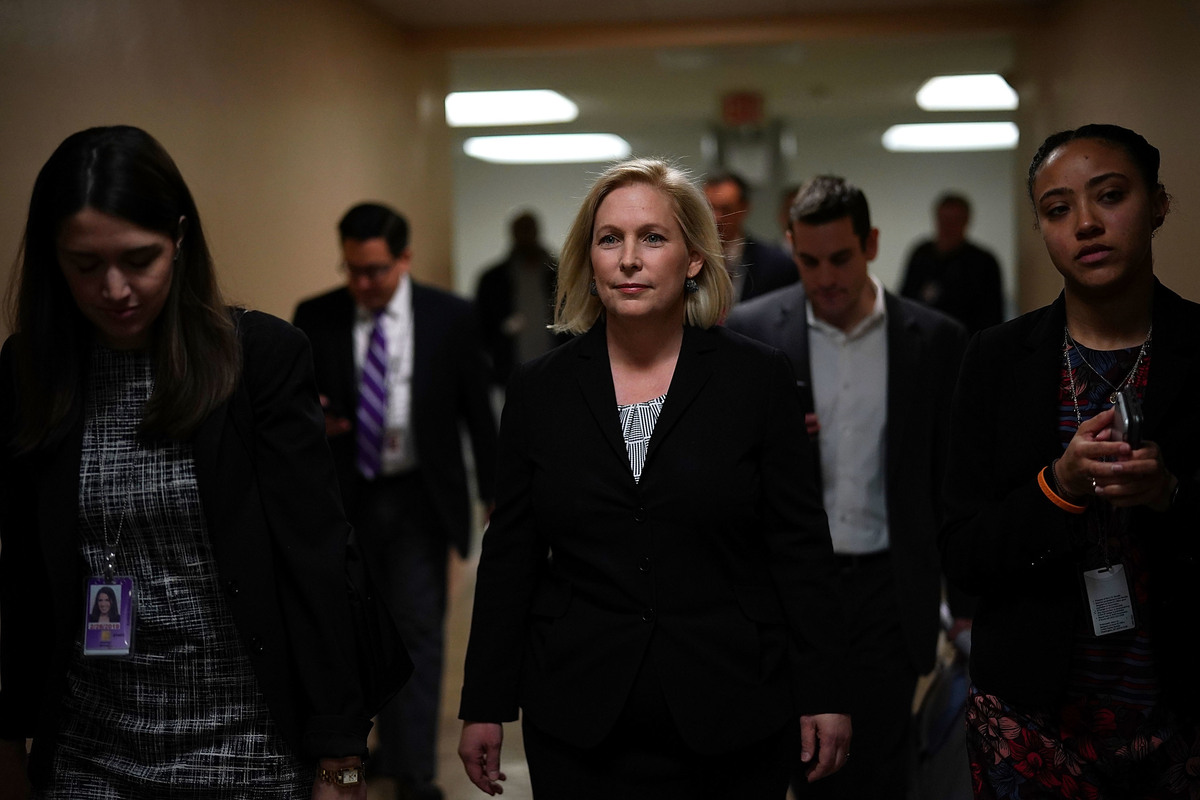 With a single 8 a.m. tweet, a classic Trumpian feud has erupted between the president of the United States and the junior senator from his home state, a high-profile female Democrat who called his tweet "a sexist smear."

Sen. Kirsten Gillibrand, D-N.Y., was attending a bipartisan Senate prayer meeting Tuesday morning when she got a phone call. President Trump had tweeted about her.

Lightweight Senator Kirsten Gillibrand, a total flunky for Chuck Schumer and someone who would come to my office “begging” for campaign contributions not so long ago (and would do anything for them), is now in the ring fighting against Trump. Very disloyal to Bill & Crooked-USED!

This appears to have been a response to Gillibrand's call on Monday for Trump to resign.

"President Trump has committed assault, according to these women, and those are very credible allegations of misconduct and criminal activity, and he should be fully investigated and he should resign," Gillibrand said in an interview with CNN's Christiane Amanpour.

That made Gillibrand the fifth senator (a sixth has since added her name) to call for Trump to step down over allegations of sexual misconduct, allegations that were aired before the 2016 election and have been revived in recent days as part of a larger national conversation about men behaving badly and the consequences that should be imposed on them.

"There's no way that this is sexist at all," said White House press secretary Sarah Huckabee Sanders, defending the tweet during her daily press briefing Tuesday afternoon. "Look, the president is always going to be somebody who responds," she also said. "We've said that many times before."

And so it was in the now well-worn tradition of Trump counterpunching that in his morning tweet the president characterized Gillibrand as "now in the ring fighting against Trump," called her a "lightweight" and then talked about campaign contributions in a way that has set off a round of criticism and questions.

Gillibrand "would come to my office 'begging' for campaign contributions not so long ago (and would do anything for them)," Trump wrote.

The main question being: What exactly did the president mean by "anything"?

Sen. Elizabeth Warren, D-Mass., seems to have taken it to have sexual undertones.

Are you really trying to bully, intimidate and slut-shame @SenGillibrand? Do you know who you're picking a fight with? Good luck with that, @realDonaldTrump. Nevertheless, #shepersisted. https://t.co/mYJtBZfxiu

It's debatable whether Trump's tweet meets the dictionary definition of "slut shaming," but as of this writing Warren's tweet has gotten more retweets and favorites than Trump's original. The same can be said for Gillibrand's tweeted response where she referenced "the millions of women who have gotten off the sidelines to speak out about the unfitness and shame you have brought to the Oval Office."

You cannot silence me or the millions of women who have gotten off the sidelines to speak out about the unfitness and shame you have brought to the Oval Office. https://t.co/UbQZqubXZv

Off The Sidelines happens also to be the name of Gillibrand's 2015 book and her political organization encouraging women to make their voices heard in politics.

Of the five senators who at the time of Trump's tweet had called for the president to resign, Gillibrand was the only woman. She was also the only one he went after on Twitter.

But Sanders insisted that has nothing to do with Gillibrand's gender. "This is simply talking about a system that we have that is broken in which special interests control our government and I don't think that there's probably many people that are more controlled by political contributions than the senator the president referenced," Sanders said, expanding on the president's tweet with a more serious charge.

Trump contributed a total of $5,850 to Gillibrand's campaigns in 2007 and 2010 according to The Center for Responsive Politics.

Last week Gillibrand was the first senator to call for Al Franken, D-Minn., to resign amid allegations that he inappropriately touched and kissed several women. An avalanche of calls for his resignation ensued, and the next day Franken was on the Senate floor announcing his plans to resign, though he also made it clear he didn't want to.

Gillibrand took heat from the left for what was seen as a rush to judgment in the case of Franken, while President Trump was able to continue on as president without any of the same calls for resignation. And thus, within days, those calls from elected Democrats including Gillibrand began in a trickle.

This sort of Twitter feud could well be fuel for both Trump's base and Democrats.

This all comes as the Democratic Women's Working Group in the House of Representatives called on the House Oversight and Government Reform Committee to investigate the claims of sexual misconduct against Trump. It is unlikely a Republican Congress would launch such an investigation. When asked whether Congress should investigate these claims against the president, Senate Majority Leader Mitch McConnell, R-Ky., dismissed the idea. And Monday four accusers held a news conference in New York and three were interviewed at length by Megyn Kelly on NBC's Today show.

Trump's White House has dismissed the revival of accusations about his alleged inappropriate behavior over the decades.

"These false claims, totally disputed in most cases by eyewitness accounts, were addressed at length during last year's campaign, and the American people voiced their judgment by delivering a decisive victory," an unnamed White House spokesperson said in a statement released Monday. "The timing and absurdity of these false claims speaks volumes and the publicity tour that has begun only further confirms the political motives behind them."