Accessibility links
Firefighters Struggle To Contain Southern California's Thomas Fire Firefighters made some progress controlling the Thomas Fire in Ventura and Santa Barbara counties, which is the fifth-largest in the state's history. Other fires in the area are mostly contained. 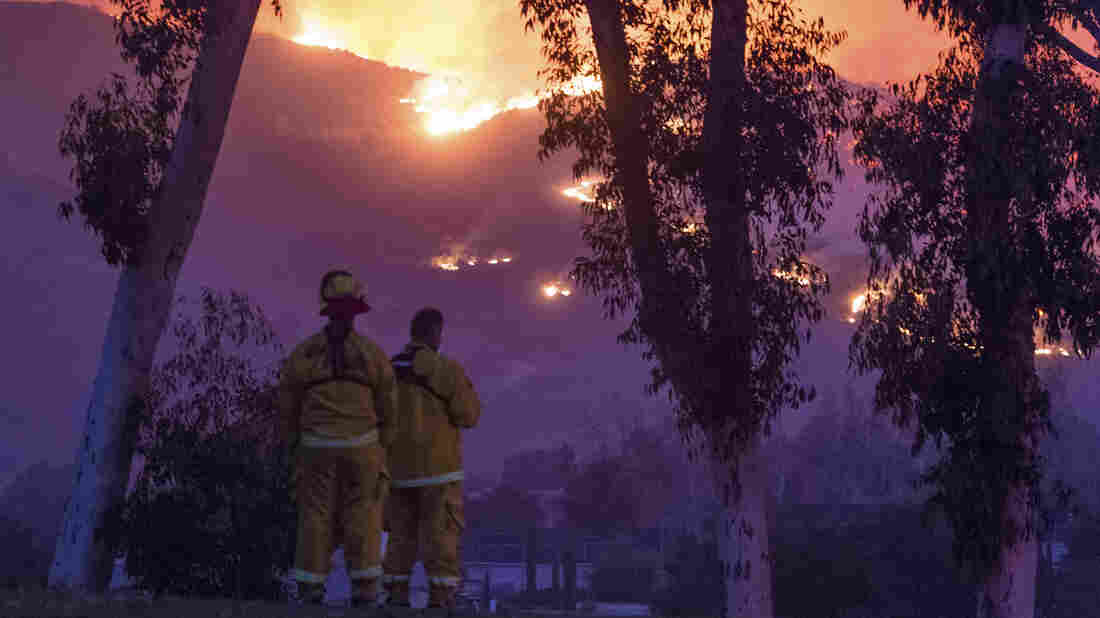 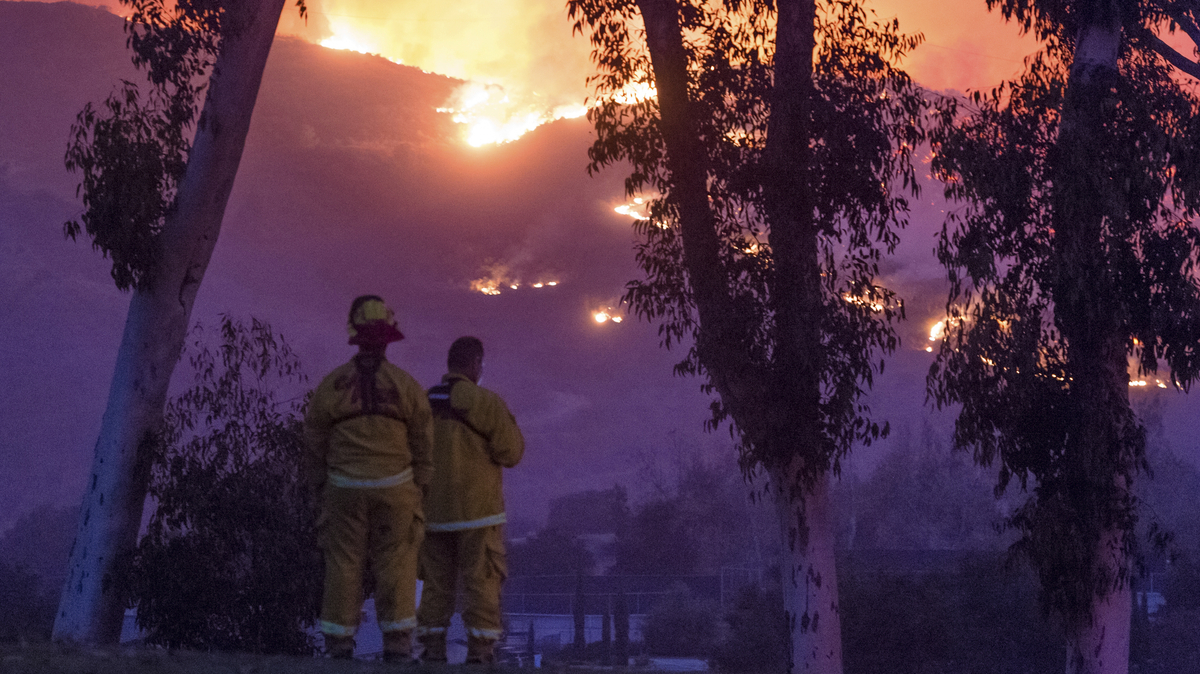 Cal Fire firefighters keep watch on a wildfire blaze burning the mountainside near the Cate School campus in Carpinteria, Calif., on Dec. 10, 2017.

Thousands of firefighters who have traveled from across the country to Southern California have started making progress containing the fifth-largest wildfire in the state's history.

The week-old, nearly 230,000-acre Thomas Fire is now 20 percent contained, after firefighters on the ground and in aircraft took advantage of weakened Santa Ana winds on Monday night. The fire has consumed an area larger than the size of New York City.

Matthew Chambers, a public information officer for the Thomas Fire, tells Here & Now's Robin Young that despite the manpower behind this effort, the job of fighting these fires is increasingly grueling.

"Take your worst day of working out and times that by a hundred," says Chambers, who is also a former U.S. Forest Service fire captain for Sequoia National Forest in California. "You come into a fire that's got winds 50 to 80 miles an hour, sustained for hours. So you're constantly getting ash, ember wash, steep terrain, flames just blowing through the mountains."

Most of the other fires in the area are largely under control, as 8,500 firefighters are working to contain them. Thousands of people have been forced to evacuate. The fires damaged or destroyed more than 1,000 homes, and killed at least one person.

According to Cal Fire, the effort has cost more than $48 million. Chambers says interagency hot shot crews — groups of highly trained, elite firefighters — are tasked with creating firebreaks in the forest by cutting down miles of brush.

"Just imagine that in 120-degree weather with a 45-pound pack on your back to carry all your water all your safety gear, and then you've got another 15- to 20-pound chainsaw on top of that, and then you also have to throw brush after you cut it. So it's very demanding," he says.

Fire officials also say firefighters have struggled to access key areas as flames threaten Central Coast cities of Carpinteria, Montecito, Summerland and Santa Barbara. This is the first time in decades some of these areas have burned.

"Because the slopes are so steep and the terrain is so rocky, it is actually quite dangerous,"Cal Fire spokesman Ian McDonald said on Friday. "We are not going to put firefighters in harm's way halfway up a steep rocky slope. We are going to wait for the fire to come to us and extinguish it where it is safe."

The good news is most of the Thomas Fire is burning away from coastal communities, Lance Orozco, news director for member station KCLU, told Young on Monday. He says a local relief agency has distributed nearly 100,000 masks to protect residents from smoke inhalation.

"Most of the fire now is moving onto the backside of the mountains," he says, "and as you go north out of Carpinteria, it's just a wilderness area."

Chambers urges the public to heed evacuation orders and warnings to stay indoors, so firefighters can access the toughest areas. He says some of his colleagues have even lost some of their own homes.

"That's how dedicated these guys are because they they'd rather take care of their neighbors than actually go over to their own house and protect themselves or their own property," he says.