Accessibility links
Are $40 Toll Roads The Future? In Virginia, officials hope a shift to toll pricing based on demand and traffic flow will change commuter behavior and reduce congestion on Interstate 66. Critics say the cost is too high. 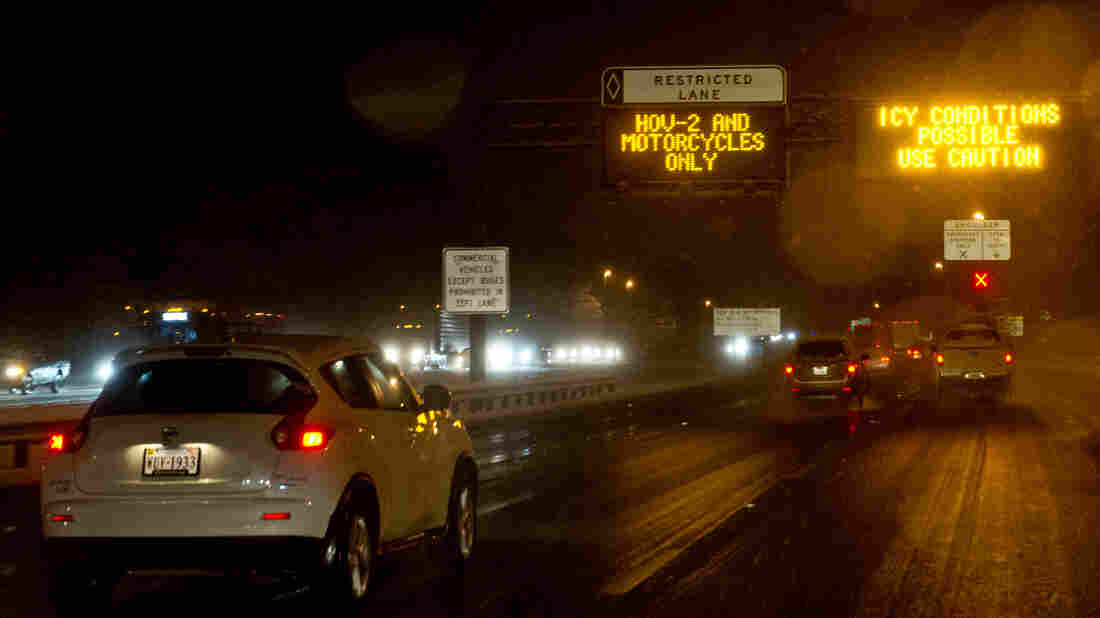 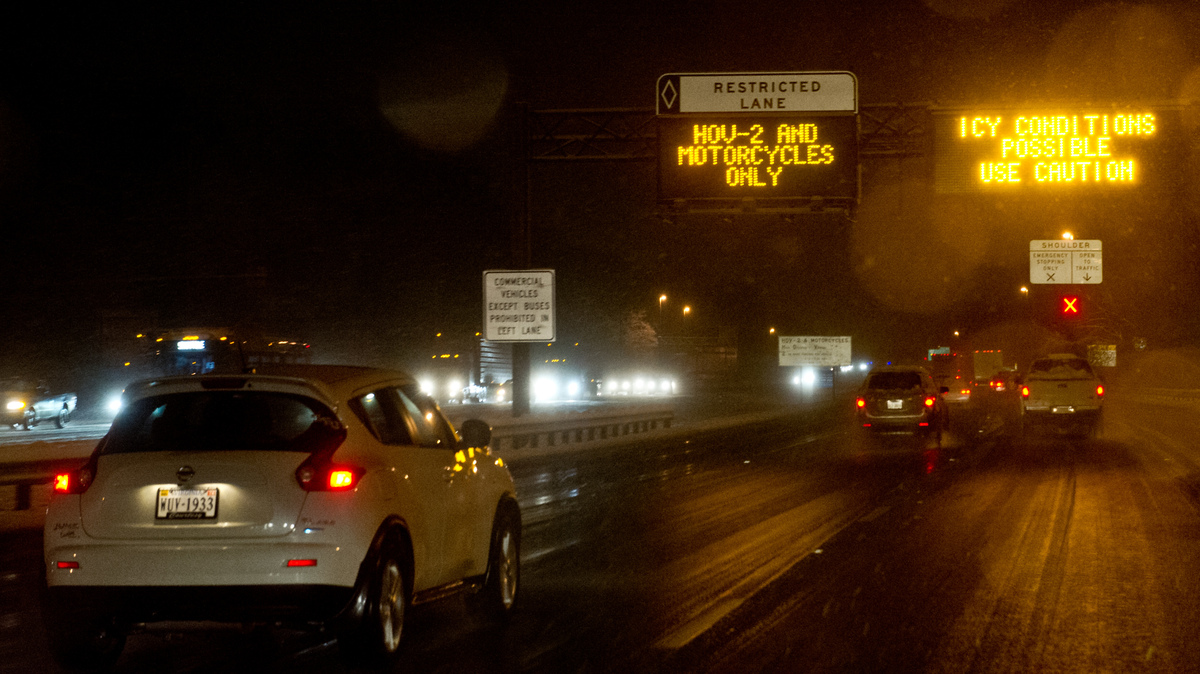 Signs warn drivers of icy road conditions on Interstate 66 in Fairfax County, Va., in March 2014. The state's Department of Transportation recently added rush hour tolls to the road, using dynamic pricing, which continuously adjusts the cost based on congestion.

That's how much a tollway in the Virginia suburbs of Washington, D.C., charged for a short time last week. Outraged commuters call it highway robbery.

But transportation officials say the high-priced toll is less about money and more about changing commuter behavior and reducing congestion, and commuters all across the country might soon see more tolls in the future.

The 10-mile stretch of Interstate 66 from the Northern Virginia suburbs into the District of Columbia is like no other road in the country. It was built in the early 1980s for carpools and buses to use during rush hour. Over the years, officials have opened it up to hybrids and a few other exemptions, and in recent years, scofflaw single drivers violating the high-occupancy-vehicle-only law helped choke the road with gridlock.

So Virginia's Department of Transportation is trying something controversial: ending free rides for hybrids, expanding the restricted hours and allowing solo drivers on for a price. And oh, what a high price it is.

When merging onto I-66 inside the Beltway one recent morning from Leesburg Pike in Falls Church, Uber driver Alfred Hewton looks up at the sign showing the price of the toll.

That's $11 to drive just 10 miles, so Hewton is relieved that for him today, it's free.

"If we have two or more people, we don't have to pay. If you're driving by yourself, it will cost you that much."

Actually, it can cost quite a bit more for solo commuters because under dynamic pricing, the cost varies, changing every six minutes based on demand and to keep traffic flowing at a minimum of 45 miles an hour. On Dec. 4, the toll topped $34 for a short period of time, and the following day, the toll hit $40.

That's enough to make any driver spit out his coffee.

"I think it's outrageous. It's actually an abuse of power, as far as I'm concerned," says Alan Bechara, who lives in suburban Chantilly, Va.

Mary Jaber says she understands the need for a modest toll.

"You know, maybe $5, I mean, just something more reasonable," Jaber says. "But a daily commute of $40 plus is extraordinary; it's extreme."

"What the toll is saying is, 'We don't want you to use it.' I personally wouldn't pay that toll," says Virginia Transportation Secretary Aubrey Layne.

"We are definitely trying to change behavior because we have limited resources," Layne adds. "We don't have the money nor the political will to continue to build highways."

Layne says heavily congested areas such as Washington, D.C., and its suburbs cannot build their way out of gridlock. So the idea behind opening up the I-66 carpool lanes to solo drivers for a high price is to actually persuade more people to carpool, to take public transportation, or to commute during off-peak hours when there is no charge.

And those who want to, he says, can spend the money to avoid congestion.

"This is a choice. No one is forced to pay this toll. And as a matter of fact, if you put someone else in your car, you never have to pay anything."

Layne says the high prices of $34.50 last Monday and $40 on Tuesday were only charged for six minutes each, and no more than 28 drivers paid that $40 toll. Morning tolls averaged $10.25 over the first four days, and the round-trip toll price averaged $12 to $17 over the first week. Before the toll lanes opened, officials had predicted round-trip tolls would average $17 a day. 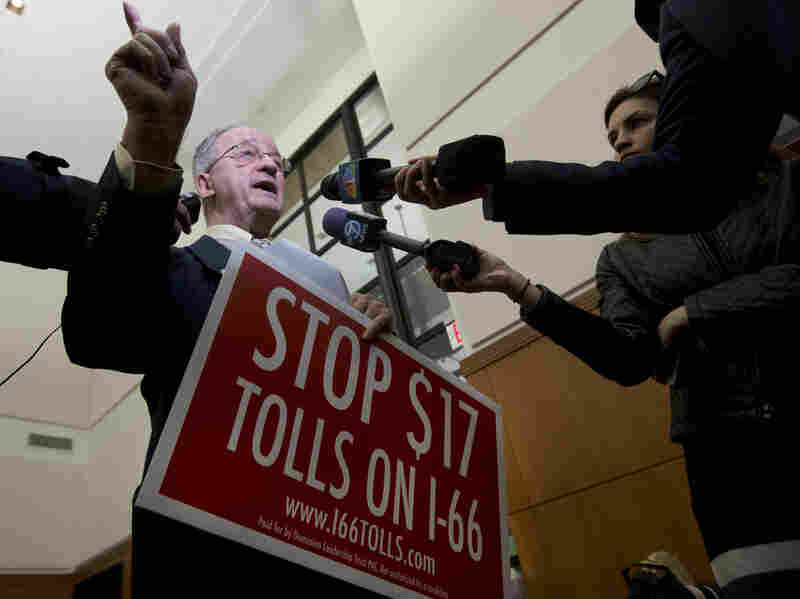 Then-Del. Bob Marshall, R-Prince William, holds a sign as he talks to the media at the Capitol in Richmond, Va., on Feb. 10, 2016, after the governor announced an agreement on an expansion plan for Interstate 66 in Northern Virginia. Steve Helber/AP hide caption 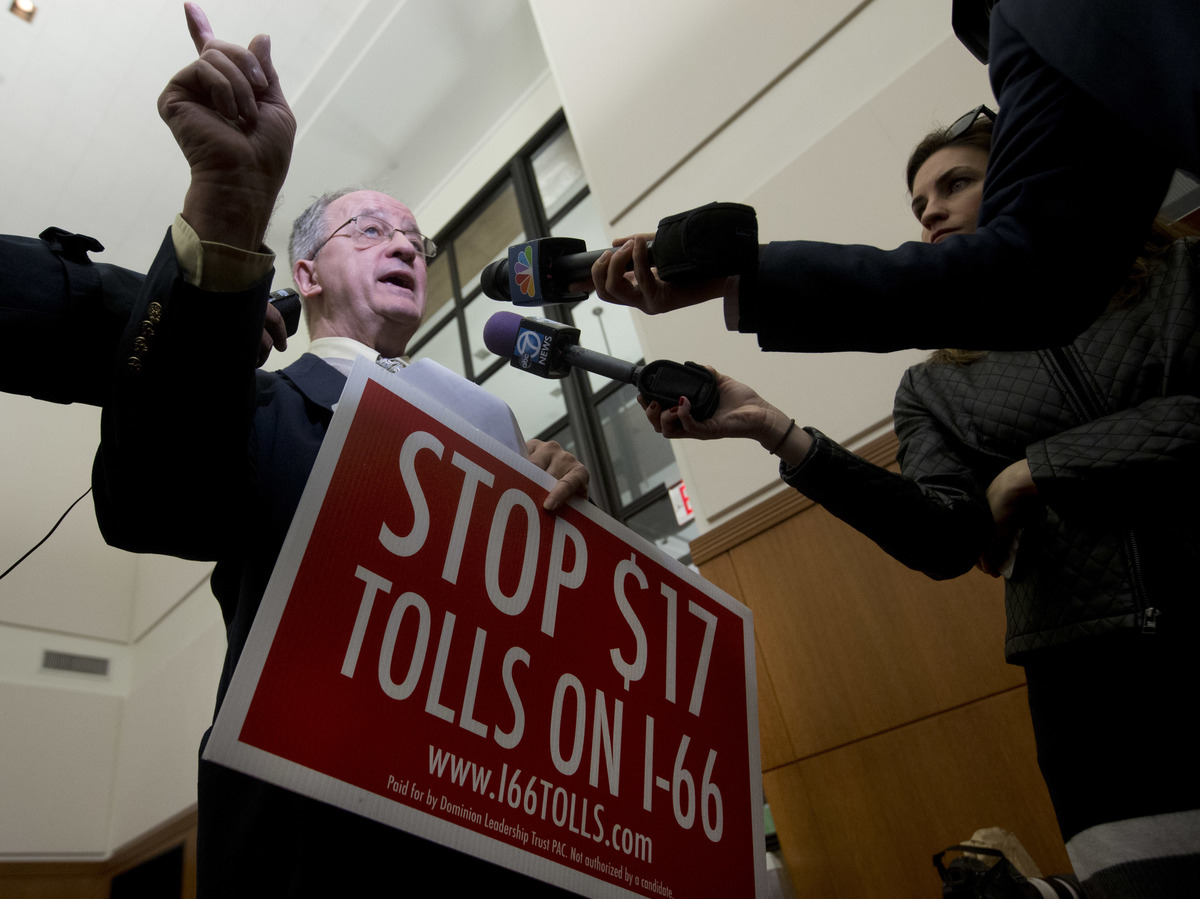 Then-Del. Bob Marshall, R-Prince William, holds a sign as he talks to the media at the Capitol in Richmond, Va., on Feb. 10, 2016, after the governor announced an agreement on an expansion plan for Interstate 66 in Northern Virginia.

And because this wasn't even a legal option for solo drivers during rush hour before last week, Layne says there's been only a little spillover effect clogging other roads with drivers trying to avoid the high tolls, though some drivers complain about more congestion at entry points where commuters are trying to decide whether to get on and pay.

While the peak prices are among the nation's highest tolls ever charged, some see them as a sign of things to come.

"You definitely are going to see much more tolling both for general purposes, and you're going to see tolling like the price-managed lanes on I-66 to alleviate congestion," says Pat Jones, executive director of the International Bridge, Tunnel and Turnpike Association, which represents toll facility owners and operators. Jones says there are already 40 toll facilities in 11 states, including California, Texas and Washington, using dynamic pricing, and many more under consideration across the country. Most tollways with dynamic pricing don't have a cap or a maximum price, but they sometimes have a minimum price and averages. On Southern California's I-91, in Orange and Riverside counties, the tolls can reach as high as $25.05.

"I think in fact we are underpaying; we've underpriced the highway system and evidence of that is the congestion that we see in our urban areas," Jones says.

But many Northern Virginia commuters are not convinced, especially those who say carpooling and public transportation are not realistic options for them.

Jaber doesn't use I-66 and believes "it's a very unjust system. I think there are a lot of people ... that are not going to use it as a reflection of obviously cost and budgeting."

Urd Milbury, who commutes to and from her job at the Norweigan Embassy, hasn't taken I-66 yet "and I probably won't because of the prices. It could be extremely expensive at times, which is probably exactly when I want to go to work."

Milbury agrees with those who call the high toll prices outrageous and thinks it will be a hardship for some families.

Meghan Jackson says she and her family "dance around" using the I-66 tollway, taking alternative routes or the Metro subway into the city. "I'm not sure if this fix will really reduce traffic in any way and I'm not really sure if its really of service to those of us living in Northern Virginia who have to get into the city."

But with the federal highway trust fund failing to keep up with needs, and with very little new transportation funding likely coming from Washington anytime soon, tolls increasingly are becoming a go-to source for transportation funding. Commuters trying to avoid traffic jams may need to keep one hand on the wheel, and the other on their wallet.