Accessibility links
'Negro' Not Allowed On Federal Forms? White House To Decide The Trump administration has delayed announcing its decision on an Obama-era proposal to stop allowing the term "Negro" to appear on federal forms collecting information about race.

'Negro' Not Allowed On Federal Forms? White House To Decide

'Negro' Not Allowed On Federal Forms? White House To Decide 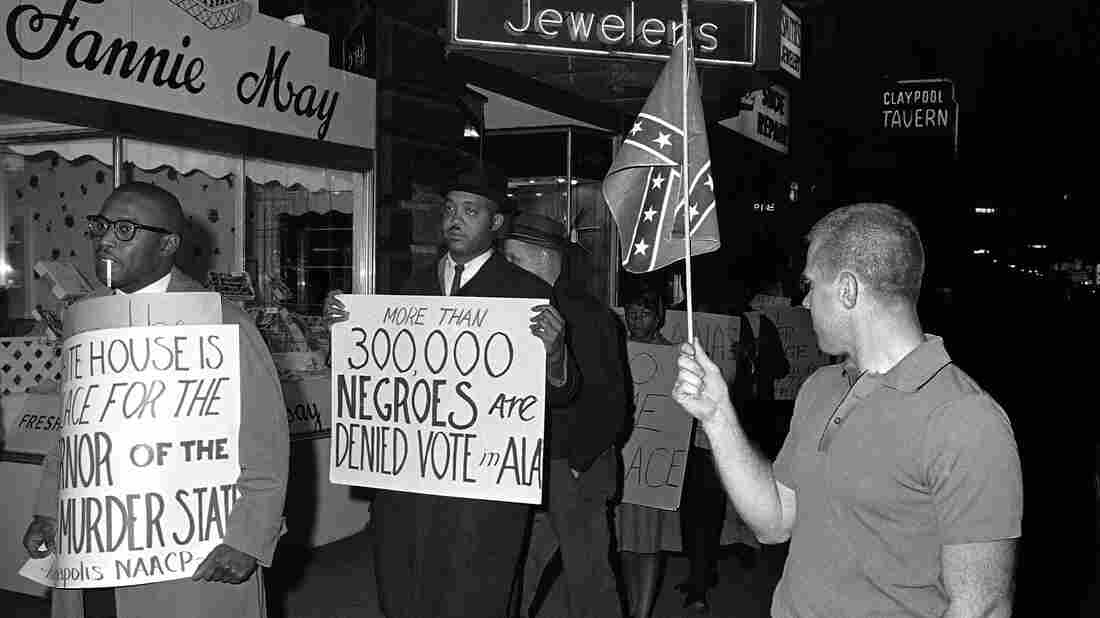 A demonstrator carries a sign that says "More than 300,000 Negroes are Denied Vote in Ala" to protest then-Alabama Gov. George Wallace's visit to Indianapolis in 1964. The word "Negro" was widely used to describe black people in the U.S. during the early civil rights era. Bob Daugherty/AP hide caption 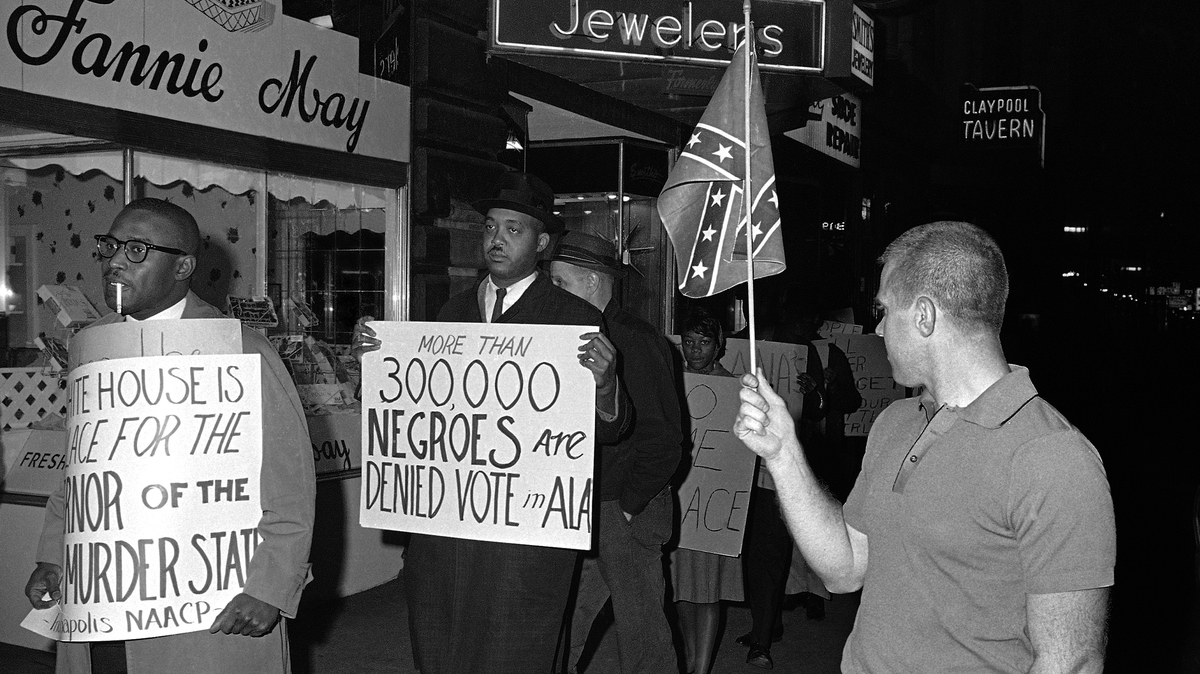 A demonstrator carries a sign that says "More than 300,000 Negroes are Denied Vote in Ala" to protest then-Alabama Gov. George Wallace's visit to Indianapolis in 1964. The word "Negro" was widely used to describe black people in the U.S. during the early civil rights era.

It has been called antiquated and even insulting.

But back in 1900, "Negro" was considered modern — a term that could replace a flawed set of categories used to classify people of African descent for the U.S. census.

This was a period when a person's race was determined by a census taker, who reported the information back to the federal government based on observations. "Be particularly careful to distinguish between blacks, mulattoes, quadroons, and octoroons," census takers were instructed for the 1890 census.

But later in a report on the 1890 census results, the government concluded: "These figures are of little value." "Quadroon" and "octoroon" have never been used again for the census. ("Mulatto," first used in 1850, made return appearances in 1910 and 1920.)

The 1900 census took a different approach to counting people of African descent. For the first time, "Negro" was added to the instructions, and census takers were trained to write "B" on their worksheets to report a person as "black (Negro or of Negro descent)." Who fit that definition was up for the census taker's interpretation.

The Census Bureau said using "Negro" for the 1900 census was "justified" by what it saw as growing acceptance for the term, as it explained in a 1904 report called "Negroes in the United States":

"That the dislike and avoidance of the word negro among members of the African race is disappearing seems to be implied by current usage as indicated in the title of such books as Mr. W. E. B. Du Bois's 'The Philadelphia Negro,' and Mr. Booker T. Washington's 'The Future of the American Negro' [sic]."

More than a century later, though, the Census Bureau made an about-face. It announced in 2013 that it would drop the word from the census and other surveys. The U.S. Army made a similar decision in 2014 for an official document detailing its equal opportunity policy. In 2016, President Barack Obama signed a law to "modernize" a couple of 1970s-era laws by replacing "Negro" with "African American." (It also switched out "Oriental" for "Asian American.")

These moves allowed the government and its institutions to catch up with generational shifts within the black community. After decades of an ongoing debate about labels, the term "Negro" — once commonly used by Martin Luther King Jr. and other early civil rights era leaders — gave way to the rise of "black" beginning in the mid-1960s and later "African-American" in the late 1980s.

"Negro," however, is not forbidden on federal forms today. In fact, the term is an option that "can be used if desired" to describe the "black" category when collecting information about race, according to a policy directive from the White House Office of Management and Budget. This agency sets the standards for race and ethnicity data for the federal government — data that is used to draw legislative districts, enforce civil rights laws and measure health effects.

Right now, the Trump administration is considering an Obama-era proposal to remove "Negro" from those standards. Another proposed change is to remove the term "Far East," which currently describes a geographic region of origin for people of Asian descent. Other possible policy revisions could radically change the way the government counts the Latino population and people with roots in the Middle East or North Africa.

When OMB will announce its decision on all of these proposed changes, however, is an open question. The agency had previously said Dec. 1 was its self-imposed deadline, and it has not responded to NPR's inquiries about the delay.

The term "Negro" was only added to the federal standards in 1997. That was the last time the policy, first released in 1977, underwent major revisions.

The Clinton administration approved a recommendation to add "Negro" to the standards as an optional term, as proposed by an advisory committee of experts from federal agencies.

"Using more than one term [for the 'Black' category on federal surveys and other forms] is more inclusive and could achieve more complete coverage of the Black population," the committee members wrote in a 1997 report, citing research from the mid-1990s that suggested that "older Blacks" favored "Negro." (Their report also notes " 'Colored' was favored by some Blacks in the South.")

The current proposal to remove "Negro" has been endorsed by a recently-formed advisory group of federal experts who cited concerns that survey participants today may find the term "outdated" or "offensive." The NAACP and other civil rights groups have also called for the word to go.

"There is a very clear consensus that the obsolete term 'Negro' should be eliminated," said Marc Morial, president and CEO of the National Urban League, in a written statement about the White House's delayed announcement. "We urge the administration to proceed immediately, keeping the fairness and accuracy of the census at the forefront of concern."

'No reason to continue to use it'

It's not clear which, if any, federal forms currently include the word now that the Census Bureau has stopped using the term on its surveys. But many state governments, schools and hospitals rely on the federal standards, which still allow "Negro," as a guide for how to ask about race and ethnicity on their own forms.

In 2014, a Facebook post about "Negro" appearing on juror information cards used by New York's state courts made national headlines. The term has since been removed from the cards, according to Arlene Hackel, a spokesperson for the New York State Unified Court System.

Before its 2013 announcement about no longer using the term, the Census Bureau sparked controversy by including "Negro" on its last census forms. In a 2010 blog post, the bureau's then-director, Robert Groves, apologized to people who were offended but noted that research from the late 1990s showed that "an older cohort of African-Americans," about 56,000 people, self-reported their race by writing in "Negro" under the "some other race" category.

"I am confident that the intent of my colleagues in using the same wording as Census 2000 was to make sure as many people as possible saw words that matched their self-identities," Groves wrote. "Full inclusiveness was the goal."

More recent research conducted by the bureau in 2010, however, suggests that removing "Negro" from the census questionnaire would not decrease the number of people self-reporting as "Black or African American." Keeping it, the Census Bureau researchers wrote in their report, could risk some participants deciding to not answer the census.

"Due to the tremendous concern over this archaic term remaining on the questionnaire," the researchers concluded, "there is no reason to continue to use it."

If you have seen the word "Negro" recently on a survey or form, please contact the reporter at nprcrowdsource@npr.org with "federal forms" in the subject line.