Accessibility links
Black Votes Were Key To Doug Jones Win In Alabama Senate Special Election More than 90 percent of African-Americans voted for Doug Jones in Alabama's special Senate election Tuesday and Jones had the support of 98 percent of black women, according to exit polling. 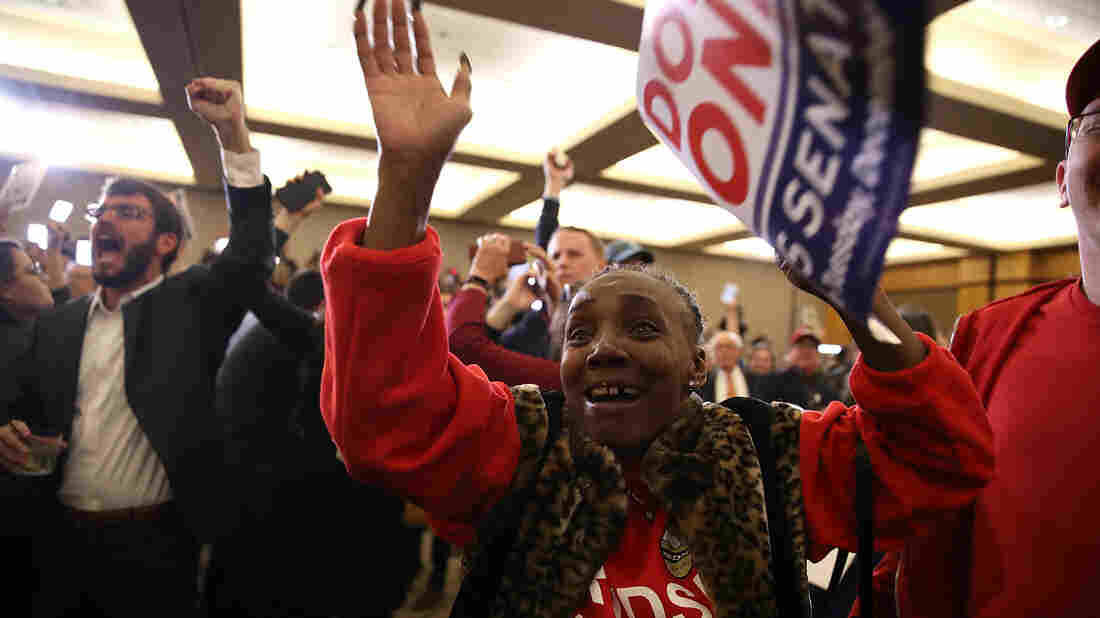 Supporters of Democrat Doug Jones celebrate as Jones is projected to be the winner in Alabama's special Senate election during his election night gathering Tuesday in Birmingham, Ala. Justin Sullivan/Getty Images hide caption

When Sen.-elect Doug Jones, D-Ala., addressed his cheering supporters Tuesday night in Birmingham, Ala., one of his first shout-outs went to his African-American supporters. As well it should have.

Black voters made up 29 percent of the electorate in Alabama's special Senate election, according to exit polling. That percentage is slightly more than the percentage of Black voters in the state who turned out for Barack Obama in 2012. And a full 96 percent of Black voters in Alabama Tuesday supported Jones, including 98 percent of African-American women. "Black women led us to victory. Black women are the backbone of the Democratic party," Democratic National Committee chairman Tom Perez tweeted Wednesday morning, "and we can't take that for granted. Period."

Let me be clear: We won in Alabama and Virginia because #BlackWomen led us to victory. Black women are the backbone of the Democratic Party, and we can’t take that for granted. Period.

Jones win spurred many posts on Twitter with the hashtag "BlackVotesMatter."

#BlackVotesMatter and don't let anyone tell you different.

One of his African-American supporters, Mae Stevenson, told NPR's Russell Lewis Tuesday night that Jones was "somebody who really and truly had a heart for the black people." She cited his prosecution while U.S. attorney of two Ku Klux Klan members for the bombing of the 16th Street Baptist Church in Birmingham in 1963, in which four African-American girls were killed.

Mike McBride, a Jones volunteer who traveled from California to help get out black voters, told NPR's Morning Edition the allegations that Republican nominee Roy Moore preyed on young girls and his inflammatory comments on race "animated the base of Christians and faith leaders." He said "the Black church stood up and said that the true Jesus of liberation and justice will always overpower the Jesus of dominance and racial hierarchy and division."

The question now is how Jones and other Democrats can deliver on their promises to black voters who are concerned about issues such as health care, black unemployment and police shootings. In an interview on CNN Tuesday night, former NBA star and Jones supporter Charles Barkley said the vote was "a wake-up call for Democrats."

Democrats, and I told Mr. Jones this, and I love Doug, they've taken the black vote and the poor vote for granted for a long time. It's time for them to get off their ass and start making life better for black voters and people who are poor. They've always had our votes and they've abused our votes and this is a wake up call for Democrats to do better for black people and poor white people.