Accessibility links
Potent Cocktail Of Drama And Documentary Explores A Mysterious Death: 'Wormwood' Filmmaker Errol Morris employs fictional techniques — and famous actors — in this 241-minute meditation on the demise of a CIA operative in 1953 that left a son obsessed with finding answers. 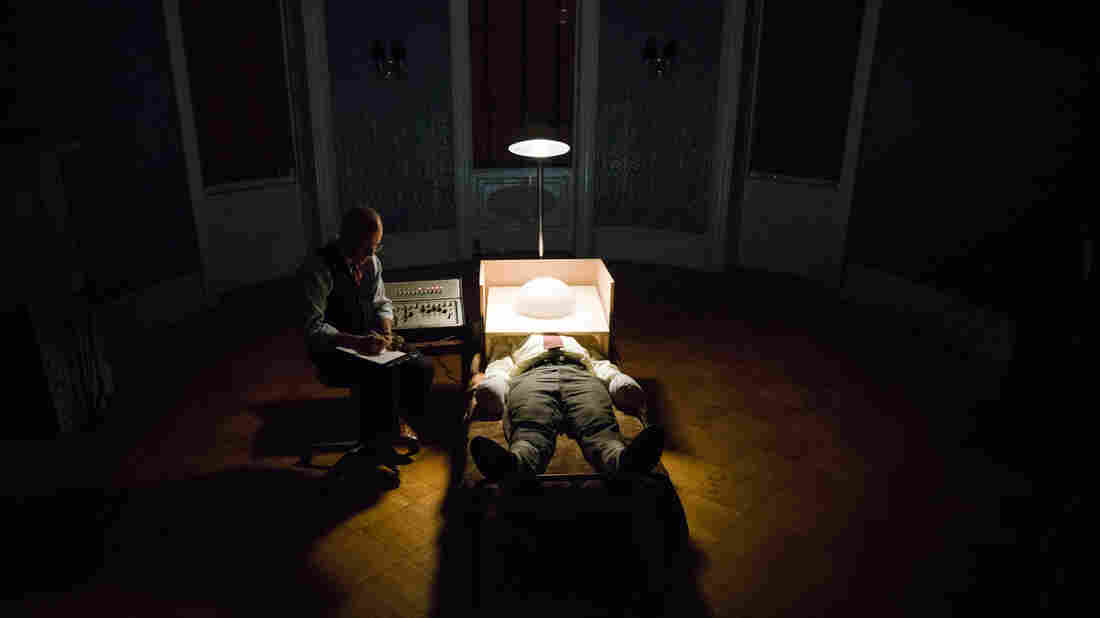 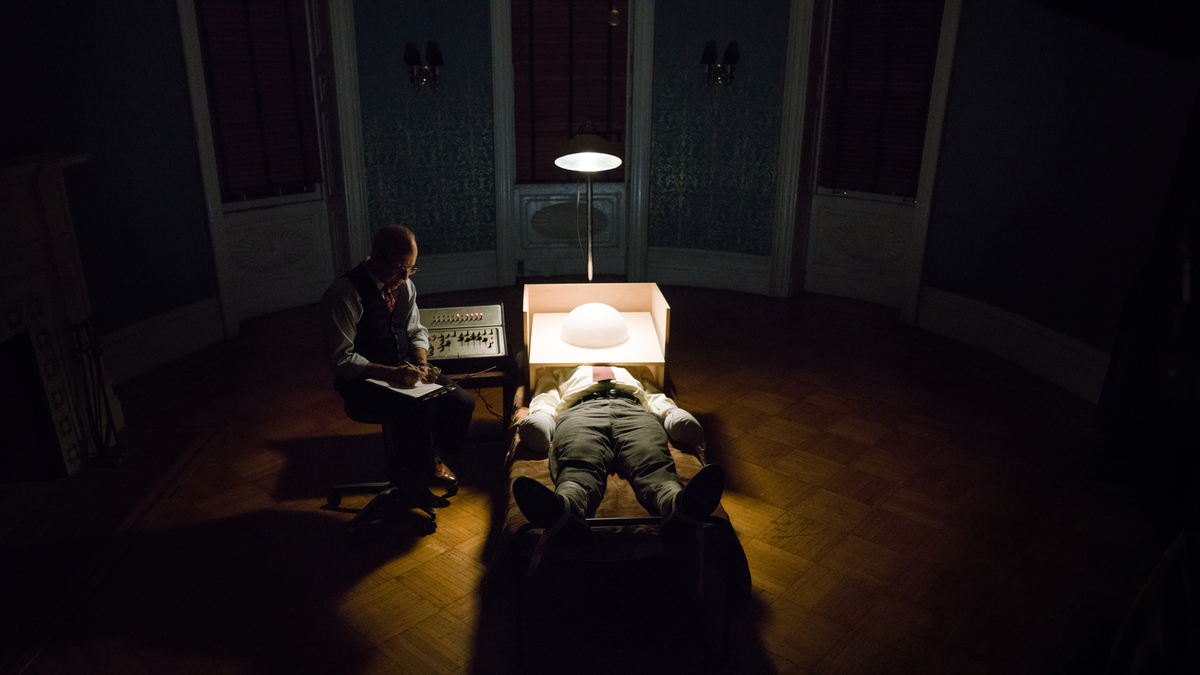 Bob Balaban and Peter Sarsgaard star in Wormwood, a film that investigates the death of Frank Olson.

What is known for sure about American military scientist Frank Olson is that on November 28, 1953, the bacteriologist and father of three plunged to his death from the 13th floor of the Statler hotel in New York City, not long after he was secretly drugged with LSD on the orders of his CIA superior. Whether Olson was pushed, or jumped, or was nudged into committing suicide remains unclear. But indeterminacy with a generous side of conspiracy is catnip to director Errol Morris, who has made either a 241-minute film or a six-part television series depending on where and how you plan to watch it, about the tragedy's long reach into Olson's family and America's secretive political culture.

Olson's death, and the murk surrounding its cause, cast a defining shadow over the life of his son Eric, whose endless quest to find out what happened that night has pre-empted all other endeavors. The blight spread around his family. His mother became an alcoholic with, the film implies, the active encouragement of one of her husband's colleagues. But Eric, now in his 60s, has arguably been completely derailed by the tragedy. He is the central focus of Wormwood, a hybrid blend of documentary and Cold War thriller that makes The B-Side, Morris's loving portrait of radical photographer Elsa Dorfman earlier this year, look almost straightforward.

"You'll never know what happened in that room," Olson's widow (played in reenactments by Canadian actress Molly Parker and by herself in home and news footage) repeatedly told her son. Her warnings did nothing to offset Eric's lifelong quest to find out what happened to his father. It's not hard to see what drew Morris to Eric and his story. A gifted obsessive in his own right, Morris has also made the blurring of boundaries between non-fiction and narrative film a central project of his work. It's not a stretch to say that for both men, reality is an endlessly open question at once political and existential.

Moving back and forth between the 1953 events and 1975, when a Rockefeller commission confirmed that an army scientist had been purposefully drugged with hallucinogens , Wormwood carries us from secret meetings at Deer Lake through the long tail of misery and obfuscation left by Frank's death, to Eric's pursuit of the truth all the way to the corridors of power.

In hushed and menacing re-enactments, Peter Sarsgaard, whose mild manner lends itself to all kinds of tonal nuance, charts the decline and fall of Olson, a patriotic team player whose growing unease about his agency's secretive involvement in biological warfare overseas first worries his boss (a reptilian Tim Blake Nelson) and then moves him to seize the day and use his hapless employee as a guinea pig. By the time Frank arrives at the hotel flanked by ambiguously supportive colleagues, he's rapidly unraveling into a gibbering wreck.

Wormwood's breathless, hopped-up style harks back to Morris's 1988 The Thin Blue Line, which called into question a murder verdict and resulted in the release of a wrongly convicted suspect from Death Row. Here the noir markers are writ so large as to verge now and then on self-parody. Morris keeps returning the action to the hotel to act out different angles and competing versions of what happened to Olson that night. The hypothetical range between possible perps — Frank's boss, his friends, two wordless thugs in fedoras, a CIA allergist played by a sinister Bob Balaban — is narrow enough to make these scenes a touch repetitive if you're watching in one sitting. Certainly they underscore Morris's standing as a lifelong participant observer of American paranoia. For which, it must be said, there is undeniable fodder in the manner of Olsen's going, the secrecy surrounding his death, the ambivalent admissions the Rockefeller Commission along with a dwindling financial settlement that looks suspiciously like hush money to Olson and to Morris, and the merrily chuckling presence in old footage of two well-known knowns, Donald Rumsfeld and Dick Cheney.

For all the formal beauty of the re-enactments, the most compelling scenes in Wormwood are the unembellished interviews that Morris — ordinarily an off-screen interlocutor with an appetite for the subtly leading question — is seen conducting across a table with Eric Olson, who waves his arms around with the befuddled intensity of a superannuated schoolboy as he tells his story. Articulate and charming, Eric is a talented collage artist who seems to have sacrificed career and significant relationships to his endless search for justice and truth, even after the case was officially closed and after he contacts investigative reporter Seymour Hersh, who first reported the drugging of Olson in The New York Times. Grandiose as always, Hersh insists that he knows who murdered Frank Olson, but won't say for fear of compromising an anonymous source. We can't tell whether he's fibbing either.

A romantic view — and I wouldn't entirely put this past Morris — is that Olson is, like his interlocutor, an artist with a magnificent obsession that sustains him even when it's doomed to failure. But in Wormwood he emerges with enormous poignancy as a tragic figure, perpetually stuck in limbo like the father we see tumbling, over and over, to his fate.