Accessibility links
Poll: Americans Overwhelmingly Support 'Zero Tolerance' On Sexual Harassment Republicans, independents and Democrats alike agree that "a zero-tolerance policy for sexual harassment is essential to bringing about change in our society," according to a new NPR/Ipsos poll. 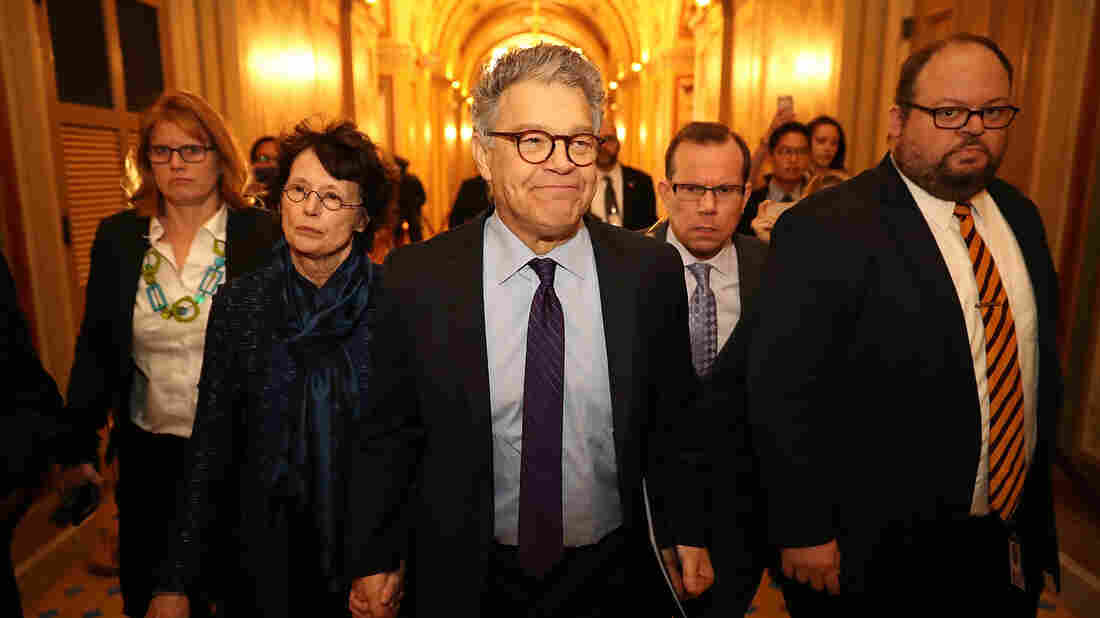 Sen. Al Franken, D-Minn., and his wife Franni Bryson (L) arrive at the U.S. Capitol Building on December 7, 2017, in Washington, D.C. Franken announced that he will be resigning in the coming weeks after being accused by several women of sexual harassment. Chip Somodevilla/Getty Images hide caption 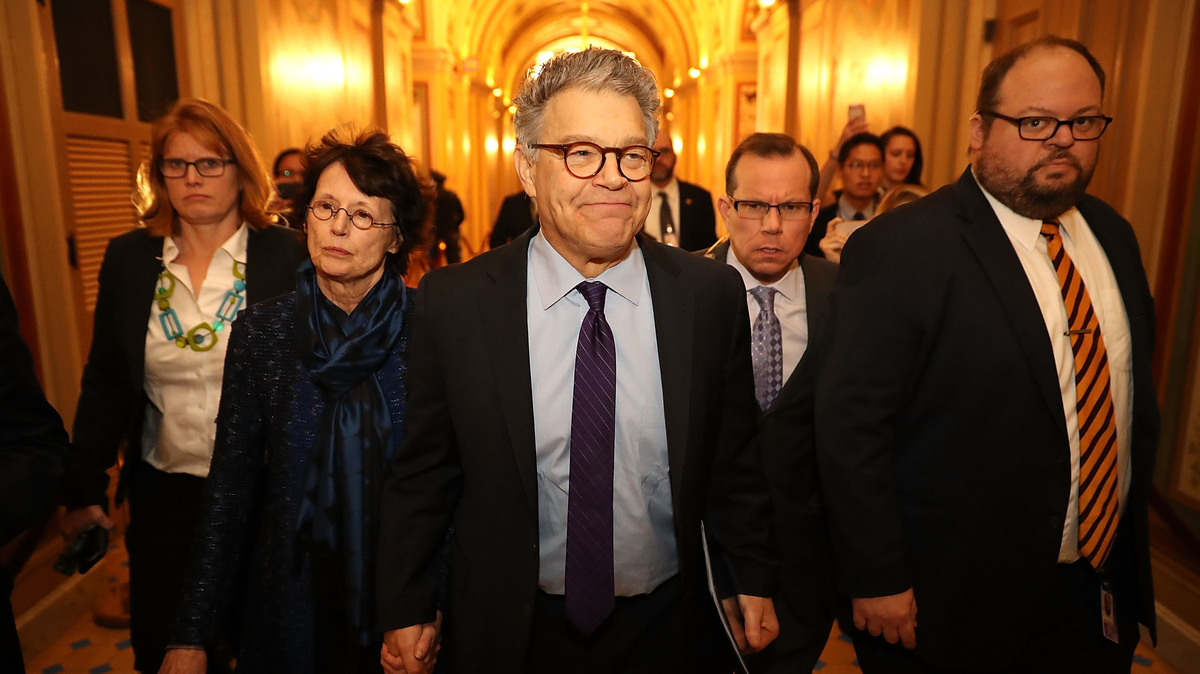 Sen. Al Franken, D-Minn., and his wife Franni Bryson (L) arrive at the U.S. Capitol Building on December 7, 2017, in Washington, D.C. Franken announced that he will be resigning in the coming weeks after being accused by several women of sexual harassment.

Nearly 9 in 10 Americans believe that "a zero-tolerance policy for sexual harassment is essential to bringing about change in our society."

At a time when partisan opinions are so polarized on a range of issues, Republicans and Democrats are relatively similar in believing that society should crack down hard on sexual harassment, a new poll from Ipsos and NPR suggests.

While the differences between parties' beliefs in many cases were modest, they were still significant on some questions.

For example, 35 percent of Republicans agreed with the idea that "nearly all instances of sexual harassment would end if the woman simply told the man to stop," compared to 20 percent of Democrats.

Those differences on some issues come out most prominently among a couple of demographics in particular.

"Those groups for sure — Republican men and Democratic women — are driving the effects big-time," said Janine Beekman, associate research scientist at Ipsos.

One way to interpret the relatively modest partisan differences on some of these questions is that both parties can agree in the abstract but not on particulars.

For example, Democrats and Republicans broadly agree on some ideas, such as the idea of a zero-tolerance policy, and they are largely conflicted between believing the accusers and those who are accused.

Around 80 percent of Democrats, Republicans and independents alike agreed that both the accuser and the accused "should be given the benefit of the doubt until proven otherwise."

But when it comes to particular cases, like those of Roy Moore or Donald Trump, many Americans seem to have partisan responses.

A late-November Politico/Morning Consult poll suggested this reaction is particularly prominent among Republicans. Republicans were much less likely than Democrats to believe allegations against prominent right-leaning figures, like Bill O'Reilly, Moore and Trump. But when it came to Democratic figures like Al Franken and Bill Clinton, Democrats and Republicans were roughly equally likely to believe sexual harassment allegations.

There's also the possibility of what pollsters call "social desirability bias" corrupting some of the results here — that is, that a respondent (of any party) might have given answers they thought sounded good. For example, a person might have thought it sounded like a better answer to say they were talking a lot with their friends about harassment, or to say that they want to give more people the benefit of the doubt.

"Any time we're talking about sex or drugs or any kind of any kind of ism that you want to talk about — racism, sexism — we're going to have issues with this," Beekman said.

Likewise, 44 percent of Americans agreed that today, "a woman who reports being sexually harassed is risking her career." But 74 percent said they thought the same was true five years ago.

Importantly, this doesn't capture actual trends in beliefs. However, it's a start at capturing people's perceptions of how quickly society's willingness to deal with sexual harassment — to believe and not punish accusers, to take allegations seriously — have changed in the #MeToo era.