Accessibility links
On His Way to Speak At FBI, Trump Slams The Bureau And Opens Door To Pardoning Flynn Before speaking at the FBI National Academy on Friday, Trump said it's "a shame what's happened" at the agency. He also called the Russia probe a "Democrat hoax" and claimed there was "no collusion." 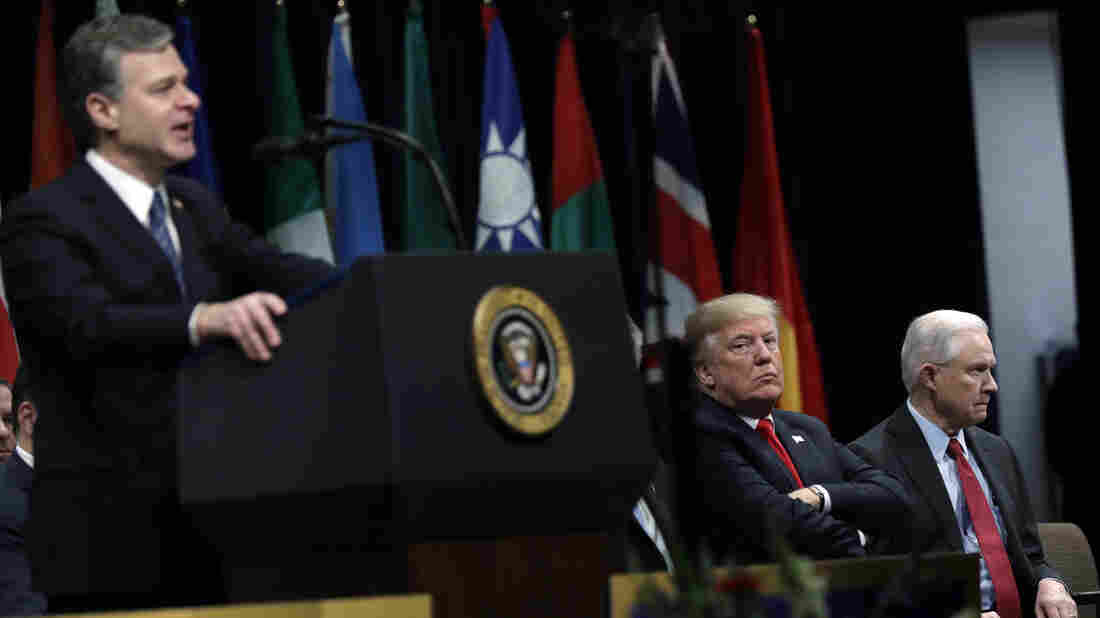 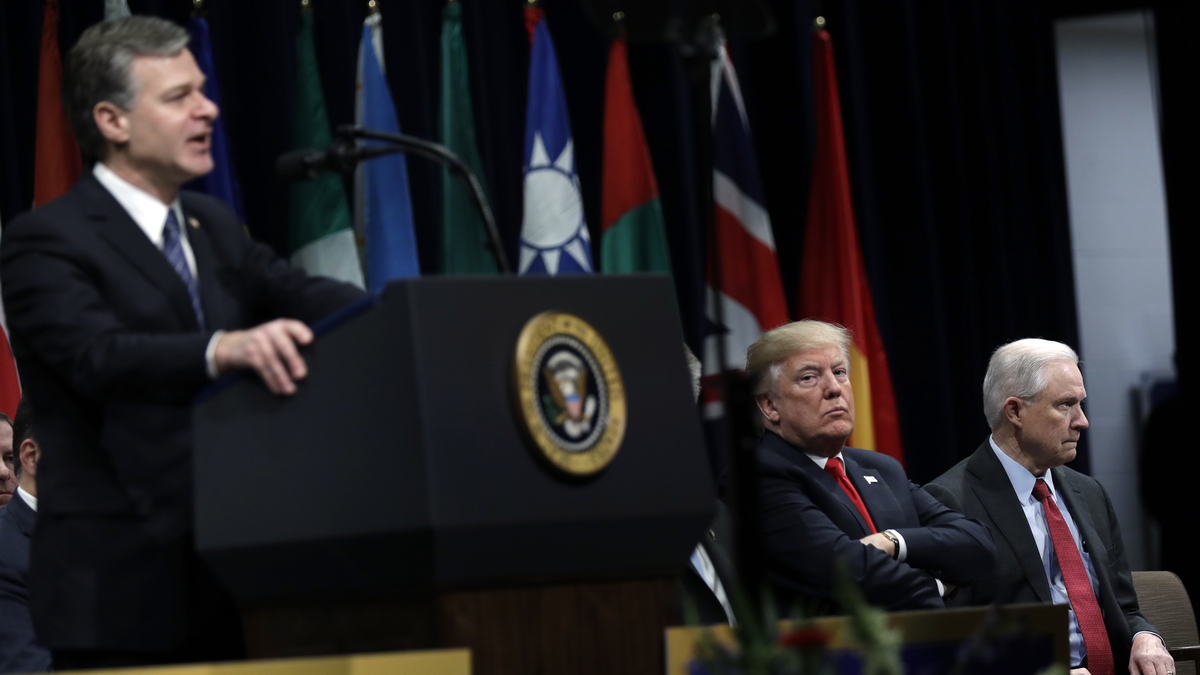 President Trump, minutes before heading to speak at the FBI's National Academy, lashed out at the bureau, saying, "It's a shame what's happened with the FBI" and claiming there are "a lot of very angry people that are seeing it."

Speaking to reporters on the White House lawn, Trump said, "We're going to rebuild the FBI" after what he described as "really, really disgraceful" documents. He appeared to be referring to text messages the Justice Department provided Congress this week in which a senior agent described candidate Trump as an "idiot" and made other political remarks in the course of the presidential campaign.

Trump's comments are the latest in a barrage of criticism he has directed at the FBI. Earlier this month, he declared on Twitter that the bureau's reputation is "in Tatters — worst in History!"

"I don't want to talk about pardons with Michael Flynn — yet," Trump said. "We'll see what happens. Let's see."

Flynn has not been sentenced and appears to be a cooperating witness as part of Mueller's Russia probe. Trump called the investigation a "Democrat hoax," "an excuse for losing the election" and claimed again "there is absolutely no collusion." 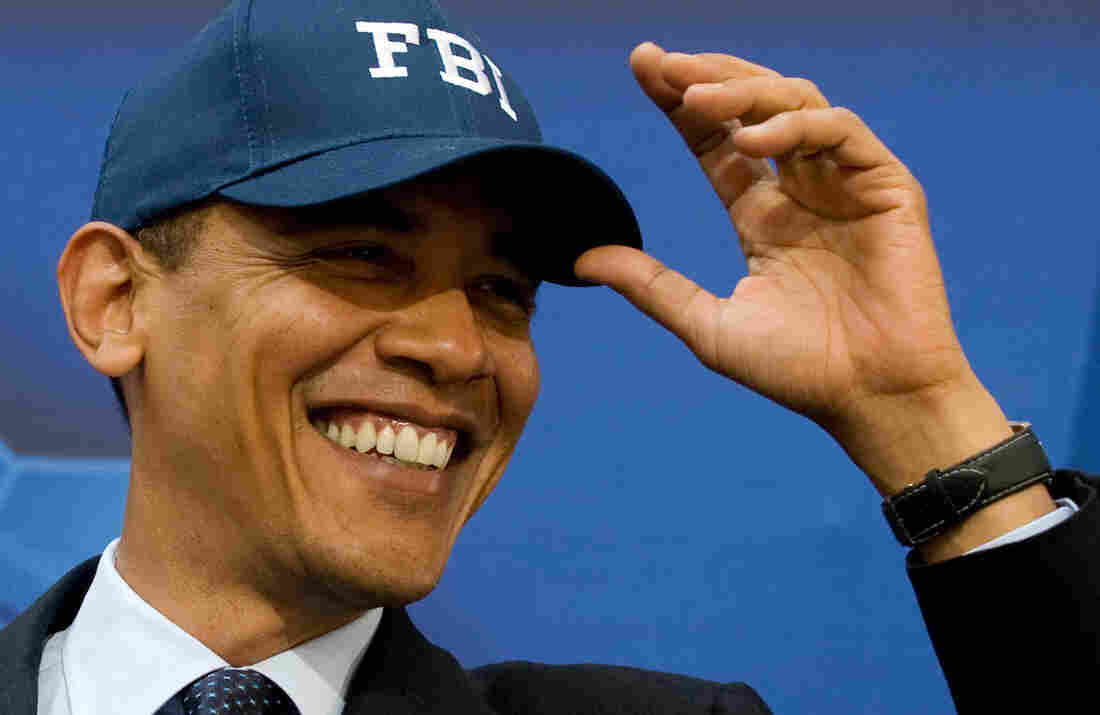 Then-President Barack Obama wears an FBI hat given to him by then-FBI Director Robert Mueller before speaking to employees at FBI Headquarters in Washington, D.C., in April 2009. Saul Loeb/AFP/Getty Images hide caption

Later, White House lawyer Ty Cobb said, "There is no consideration at the White House of a pardon for Michael Flynn."

Trump's remarks on his way to Quantico, Va., carried new potency given the president's audience Friday morning: the latest graduating class at the FBI's National Academy for law enforcement managers.

In his speech, the president refrained from attacking the FBI. He made only passing references to the bureau in his remarks before U.S. and international law enforcement officers who were graduating from a program at the FBI's prestigious training center.

Instead, Trump's speech focused on his "law and order" agenda, and he echoed comments Attorney General Jeff Sessions has frequently made since Inauguration Day: The administration backs the police.

"With me as your president, America's police will have a true friend and loyal champion in the White House. More loyal that anyone else can be," Trump said. "You very rarely get the recognition you deserve."

He promised to work with law enforcement to crack down on drug cartels and gangs, such as MS-13, whose members he referred to as "savages."

"We'll get rid of them completely, very soon, right?" Trump said as he turned and pointed to Sessions. "To any member of MS-13 listening: We will find you; we will arrest you; we will jail you; we will throw you the hell out of the country."

While Trump refrained from criticizing the FBI in his speech, his comments earlier in the day hung over his appearance in Quantico — and dominated TV news coverage leading up to his address.

That is because it's unusual for a president to blast the bureau — the premier law enforcement agency in the country.

In fact, over the past 15 years, it has been the other way around. President Barack Obama famously visited bureau headquarters a few months after he took office in 2009, donning an FBI baseball cap and sharing "the thanks of a grateful nation." A year earlier, President George W. Bush praised "the character and courage of those who carry the badge."

The appearance at the FBI had already promised to be complicated for Trump, given his record of derogatory public statements and negative tweets about the FBI this year.

Recently, Trump tweeted that the FBI's reputation was in "Tatters - worst in History!" He called popular former FBI Director James Comey, whom he fired in May, "a liar" and "a leaker." Trump also accused the FBI, without providing any evidence, of illegally wiretapping Trump Tower in 2016. And he continues to cast doubt on a conclusion by the bureau and other intelligence agencies that Russia interfered in last year's presidential election.

On Friday morning, Trump reaffirmed to reporters, "there is absolutely no collusion. I didn't make a phone call to Russia. I have nothing to do with Russia. Everybody knows it. That was a Democrat hoax. It was an excuse for losing the election."

Another source of awkwardness: the FBI's longtime former leader, Mueller, is the man running the ongoing special counsel probe into election interference — and into whether anyone affiliated with the Trump campaign took part. So far, Mueller's team has secured indictments against Paul Manafort, Trump's onetime campaign chairman, and won guilty pleas from a campaign foreign policy official and Flynn.

That last development, on Dec. 1, prompted a new wave of attacks from Trump and his supporters on the integrity of the FBI and the Justice Department, fueled by the disclosure that the Justice Department Inspector General had uncovered text messages in which a senior agent working on the Russia probe had called Trump an "idiot" during the campaign.

While Mueller removed the agent from the investigation months ago, one of Trump's lawyers, Jay Sekulow, has cited the matter to call for a second special counsel to investigate conflicts of interest at the bureau.

In response to a stream of harsh criticism this month, the FBI Agents Association mounted a rare public defense.

"Every day, FBI special agents put their lives on the line to protect the American public from national security and criminal threats," President Tom O'Connor tweeted. "Agents perform their duties with unwavering integrity and professionalism and a focus on complying with the law and the Constitution. This is why the FBI continues to be the premier law enforcement agency in the world."

"Let me start by saying that it is for me the honor of a lifetime to be here representing the men and women of the FBI," Wray said. "There is no finer institution than the FBI and no finer people than the men and women who work there and are its very beating heart."

Trump appeared on stage with Wray to welcome the new class of National Academy graduates at what is known as the agency's "police training center."

The program puts attendees through a series of academic and physical challenges, building partnerships between police and the FBI. Nearly 10 years ago, Mueller told an FBI graduating class at Quantico, "For the past 100 years, the FBI has stood for the best of America."

It remains to be seen whether the new president agrees.

A previous version of this story incorrectly said the president would be speaking to a class of FBI agents. He will be speaking to U.S. and international police graduating from the National Academy.