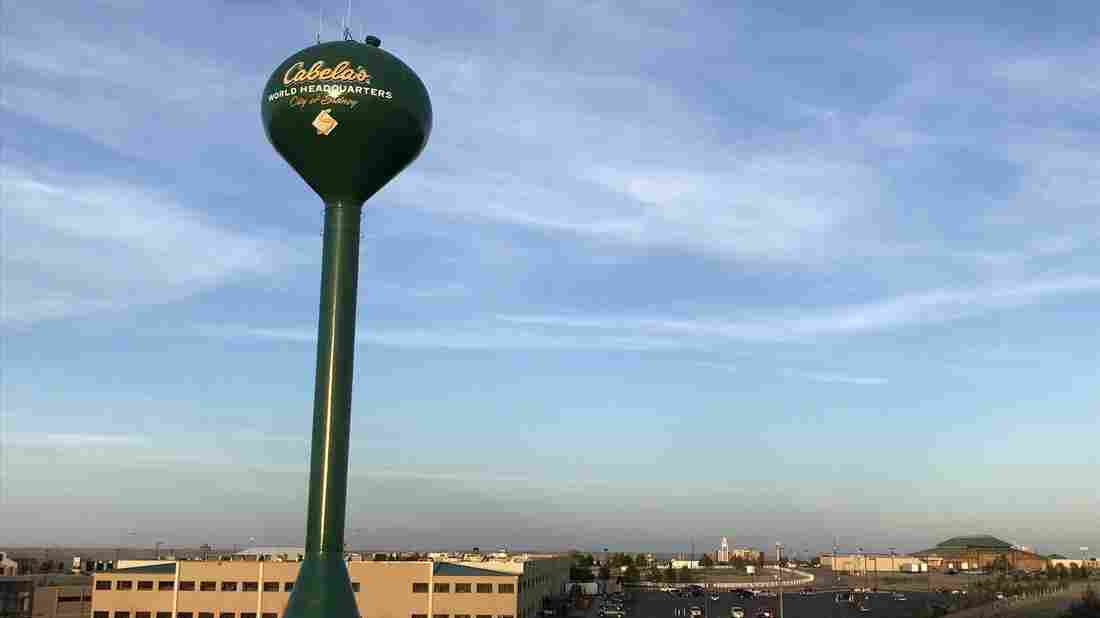 Sidney, Neb., has been home to Cabela's corporate headquarters since 1964, when Dick and Mary Cabela's catalog company outgrew its original offices in nearby Chappell. Kirk Siegler/NPR hide caption 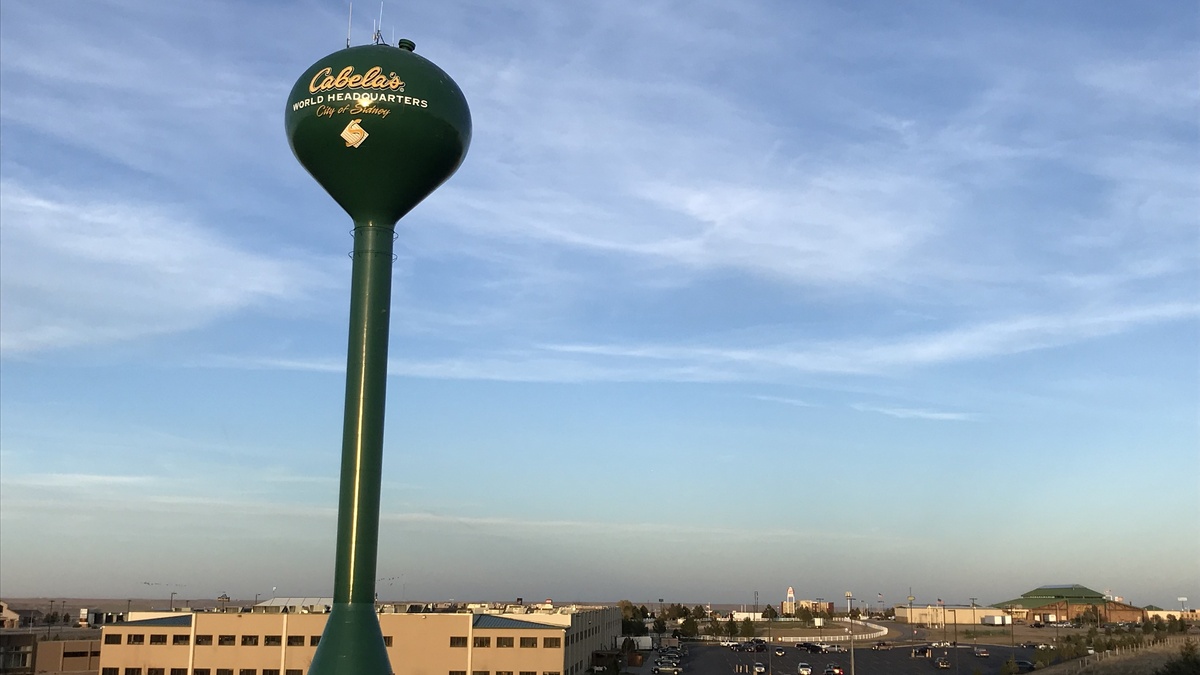 Sidney, Neb., has been home to Cabela's corporate headquarters since 1964, when Dick and Mary Cabela's catalog company outgrew its original offices in nearby Chappell.

In Sidney, Neb., Cabela's corporate headquarters and flagship superstore sit up on a hill like a castle over the prairie. Pretty much everybody in town has deep ties to it. Melissa Norgard got her first job there working in the store's deli when she was 16.

"When I was growing up here, no, I never would have ever thought, Cabela's leaving, no," Norgard says.

What States Are Doing To Stop Rural Money Drains

What States Are Doing To Stop Rural Money Drains

For 50 years, Cabela's has sold fishing rods, guns and ammo and other sporting gear across the U.S., and in the process put the little town of Sidney on the map. Not many small towns could boast they were home to the headquarters of a $4 billion enterprise. But now Cabela's has been sold to its rival Bass Pro Shops in Missouri, and the folks in Sidney are afraid they could become another struggling small town.

Layoffs and "for sale" signs

Norgard, 35, is one of Sidney's many hometown success stories, in part thanks to Cabela's. After that first deli job, she moved on to jobs in customer service and worked in the company's retail department through college. After living for a few years in Southern California, she and her husband jumped at the chance to move home and start a family. There were professional jobs in Sidney and she landed one in Cabela's marketing department.

"You don't oftentimes find a rural, small community who has been able to have so much growth," Norgard says.

This is a big deal in a place like western Nebraska, where many other towns are just barely hanging on, struggling to even keep their young people, let alone convince them they should move back.

In recent years, Sidney has built a new state-of-the-art hospital, an aquatic center, parks, bike paths that snake through cul-de-sacs of luxury homes: things you wouldn't always see in a town of 6,000 people on the remote plains. That's why the sale of Cabela's stings. There have been three waves of mass layoffs already. 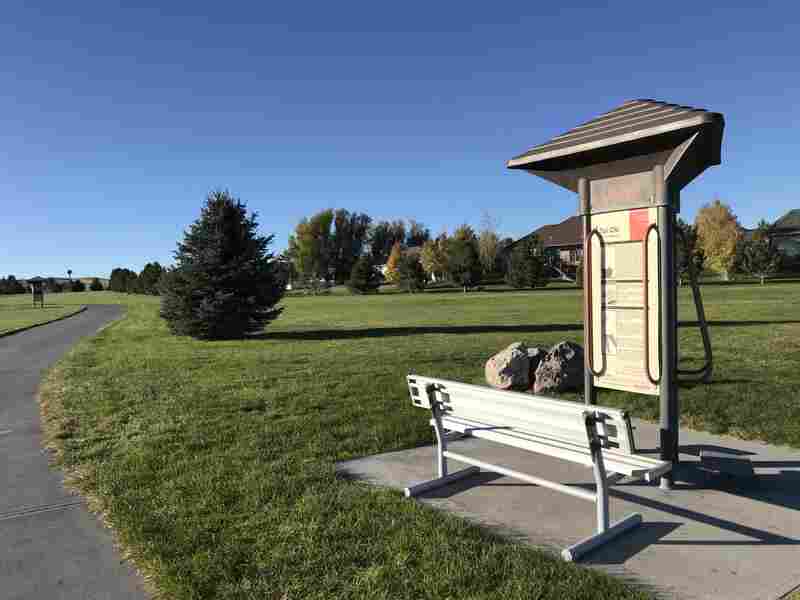 Sidney has a population around 6,000 and boasts amenities such as new bike paths, an aquatic center and a hospital that many small towns of its size lack. Kirk Siegler/NPR hide caption 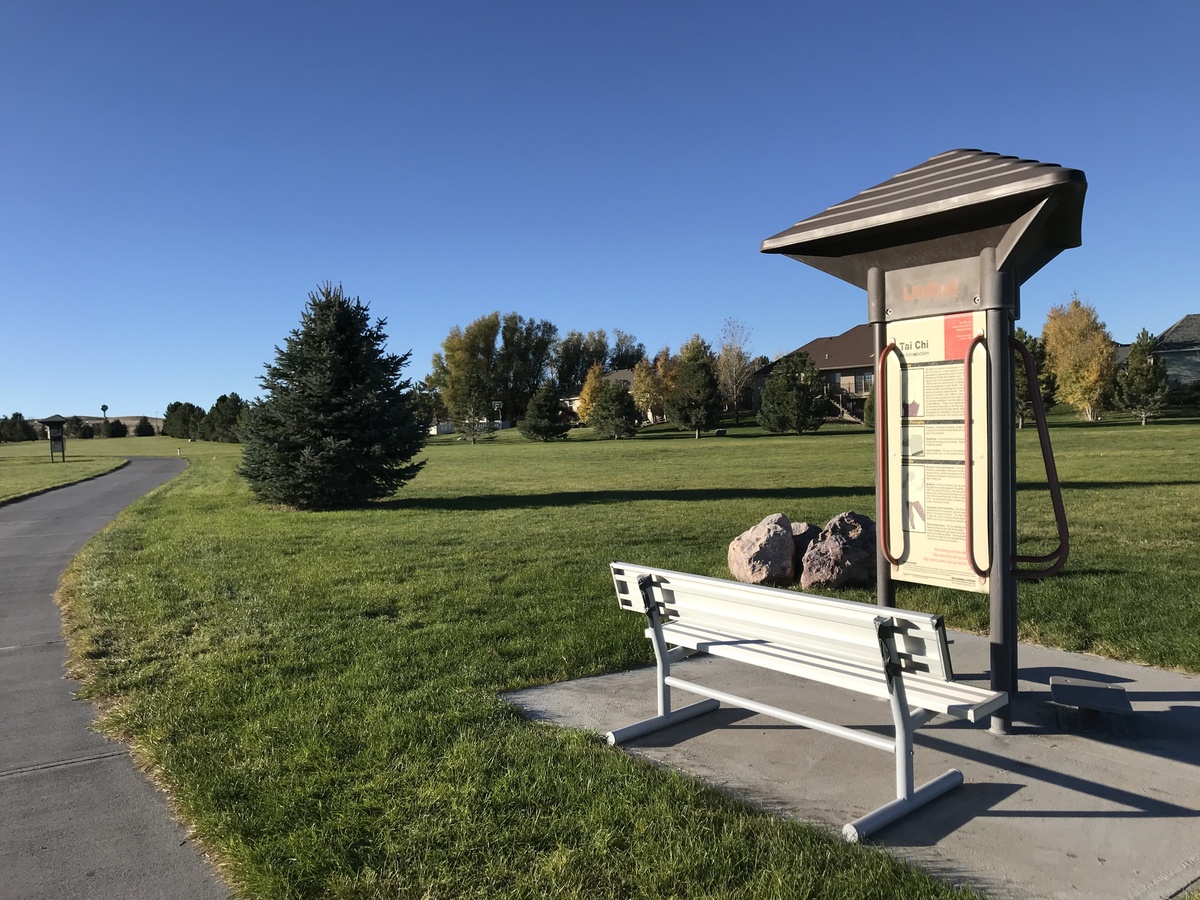 Sidney has a population around 6,000 and boasts amenities such as new bike paths, an aquatic center and a hospital that many small towns of its size lack.

"It's no big surprise when you drive around town and you see a number of 'for sale' signs up in people's yards," Norgard says.

For now, she and her husband are able to stay. Norgard recently started a new job working for the town, where it's her sole mission to recruit new companies to fill the expected Cabela's void. So far Sidney has landed a couple of small manufacturers, but these won't pay as much as Cabela's white-collar jobs, which tended to be around $70,000-$80,000.

Neither Cabela's nor Bass Pro Shops would agree to NPR's request for an interview about its plans. In a statement, Bass Pro said the company is committed to maintaining "significant operations in Nebraska." Bass Pro's CEO, Johnny Morris, recently met with Sidney Mayor Joe Arterburn and other town leaders, offering similar assurances.

But other recent cases of companies consolidating have left the mayor skeptical.

"It's one of those great American stories so it's hard to see it on edge," Arterburn says.

Arterburn was laid off recently after a 23-year career doing public relations at Cabela's. In addition to being mayor, he works as a freelance outdoor writer.

"Nobody really saw an end to the boom," he says.

Like a lot of people, he is conflicted over whom to blame. This isn't a case of a Midwestern town that fell victim to trade. Jobs aren't being shipped to Mexico or China, probably just across state lines. And people don't usually talk ill about business here. It's conservative. Eighty-five percent of the county voted for Donald Trump.

Arterburn says when Cabela's went public it became beholden to Wall Street investors, not Sidney. But he thinks his town is owed something.

"Some of these executives are going to end up with these multimillion-dollar payments, and people here are left wondering whether they're even going to have a job," he says.

Arterburn wrote those executives asking them to donate some of what he calls "their windfall" back to the town, while it tries to figure out its future. He hasn't heard back.

"My hunch is there's not going to be too many jobs in Sidney," says Bud Bilanch, who consulted companies through mergers and acquisitions for most of his career.

Bilanch, who now teaches at the University of Denver, says Bass Pro isn't going to need two of every professional job or department. There will be many redundancies. And he expects most of the remaining jobs will eventually get consolidated at Bass Pro's headquarters in Springfield, Mo., which, unlike Sidney, has a commercial airport nearby. In Sidney, the nearest major airport, Denver, is more than three hours away. 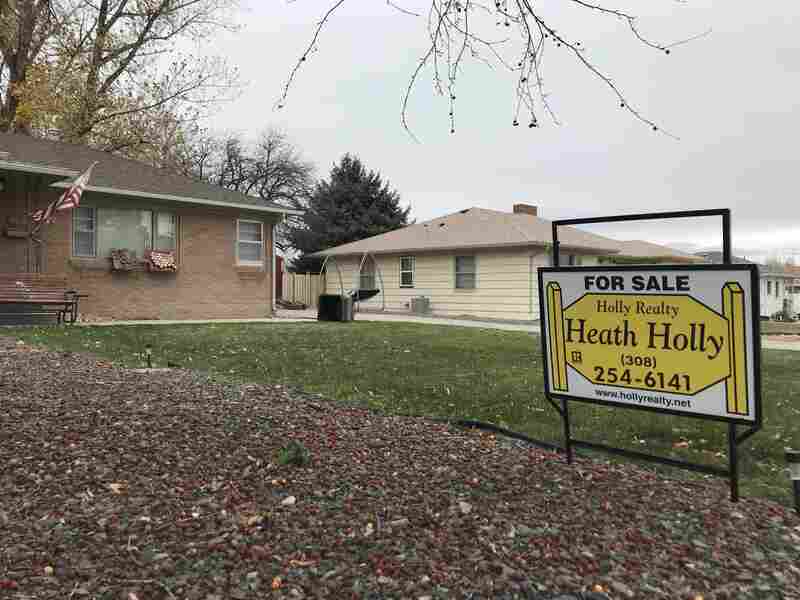 An untold number of people have tried to sell their homes and move out of Sidney, since the first round of layoffs began at Cabela's corporate in 2015. Kirk Siegler/NPR hide caption 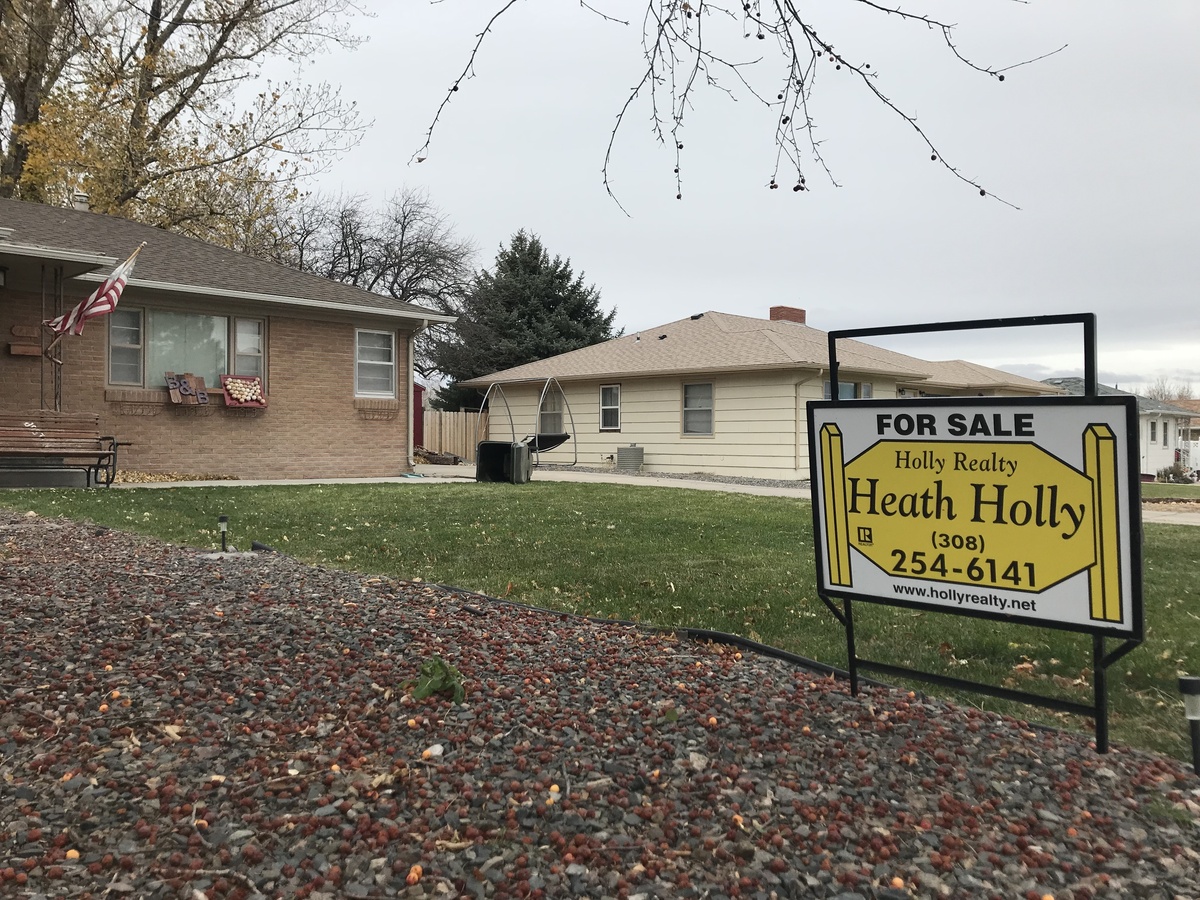 An untold number of people have tried to sell their homes and move out of Sidney, since the first round of layoffs began at Cabela's corporate in 2015.

"Industries are getting more and more consolidated," Bilanch says. "They've just become kind of like a victim of this."

Bilanch says he would feel abandoned if he lived in Sidney. But Norgard, the former Cabela's employee turned Sidney business recruiter, says at least some of the blame lies with her hometown. The town always thought Cabela's would be here, and it didn't diversify, she says.

"It's business," Norgard says. "You have to think about the what-ifs and sometimes you have to start taking into account the worst-case scenario of what could happen if."

The biggest "if" for Sidney right now is whether there will still be a large professional workforce there much longer. It has made it hard for Norgard and others to recruit new companies amid so much uncertainty.

In the town's quaint historic downtown, there are already empty buildings and "for lease" signs hanging in vacant storefronts. Lee Stewart recently decided to put his bar, Stewie's, up for sale. It used to be packed with Cabela's employees, but on one recent night recently it was empty, with Stewart the only one there, and a ballgame playing on one of the TVs.

"It's slowed down quite a bit," Stewart says. "Everybody's been holding on to their money."

Stewart, 66, has owned the bar for 10 years but has worked there since 1980. He knocks his fist on the old wooden bar for luck. It's not the first time Sidney has been on the brink.

"We've seen it before back in the '60s when the depot phased out," he says.

Back when he was in high school, the Army's weapons plant closed abruptly, and 2,000 people lost their jobs. Then Cabela's came in and eventually employed about as many people at its peak.