Accessibility links
A Play About Politics For (But Not About) The Age Of Trump The Minutes is a new drama by Tracy Letts, who won a Pulitzer and a Tony for August: Osage County. It's a dark comedy about a city council meeting — and a secret the town is hiding. 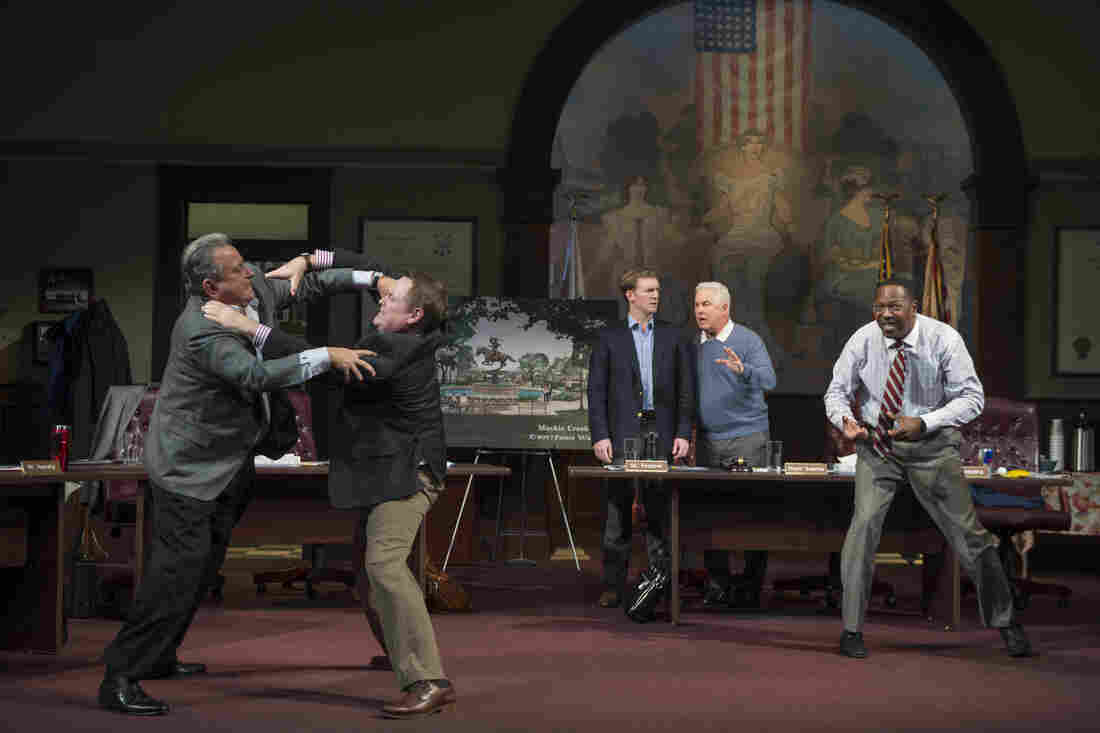 In Tracy Letts' new play The Minutes, a city council meeting takes a turn for the worse when a town's founding myth is questioned. Michael Brosilow/Courtesy of Steppenwolf Theatre Company hide caption 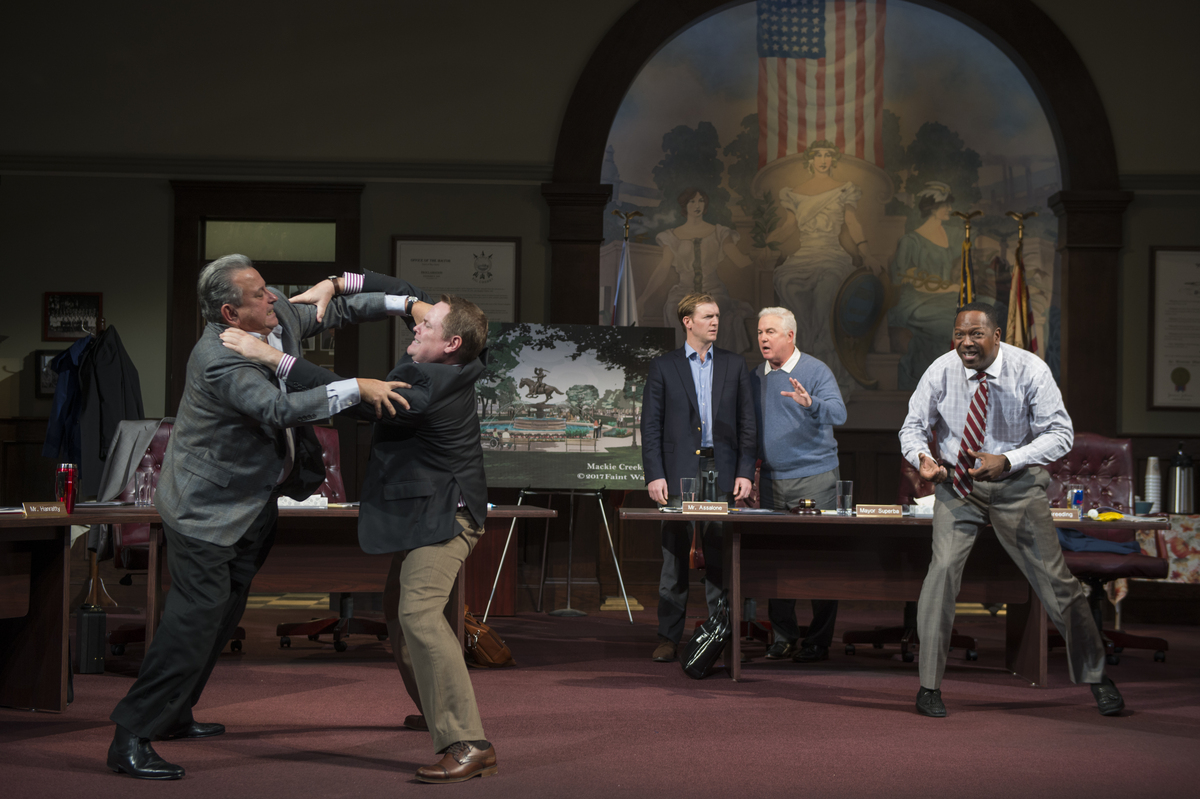 In Tracy Letts' new play The Minutes, a city council meeting takes a turn for the worse when a town's founding myth is questioned.

Playwright Tracy Letts says that by the time the 2016 election happened, he was almost finished writing The Minutes.

"It was a job of work to keep the blinders on and not make the play about Donald Trump or Hillary Clinton or — actually, to escape into the world of the play during that political moment was great, was solace," he says.

The artistic director of Chicago's Steppenwolf Theatre Company, Anna Shapiro, says The Minutes was solace for her too. Letts sent her the play just a few weeks after the election.

"And I read it and I laughed — out loud, really hard — for the first time since the first week of November," Shapiro says. "And then I cried at the end."

Of course, The Minutes is about politics – the secrets government officials hide, and the fraught compromises they often make in the course of doing business. It's a dark comedy, with echoes of Shirley Jackson's classic horror story "The Lottery." That's the one where everyone in a village gathers for an annual ritual, which ends with stoning one of their neighbors to death.

Tracy Letts — who won the Pulitzer Prize and a Tony Award in 2008 for the Broadway hit August: Osage County — says he brought up Jackson's story with the cast during rehearsals for The Minutes.

The ritual in The Minutes is a city council meeting in a medium-sized Midwestern town. A new council member — a young transplant from the coast — has just come back from burying his mother.

He missed a meeting while he was gone, and he quickly gets the sense it might have been ... eventful. Apparently, another council member lost his seat, and it takes most of the play to get the unsettling answer to his question: What happened to Mr. Carp?

The Minutes plays out in one long scene — the council meeting — with most of the cast onstage the whole time. Ensemble playing is Steppenwolf's specialty, and Letts, who is also an actor, has been a member of the company for 15 years.

In fact, The Minutes is his seventh play to premiere here. It was Steppenwolf's production of August: Osage County that ran on Broadway for a year and a half.

Letts says the company's process is crucial to how his plays develop.

"My plays here are prodded, tested, questioned by people who are — they're all very well-versed in interrogating a new play," he says.

Some of those people choose to work with Steppenwolf even when they can get bigger paychecks and bigger audiences elsewhere. 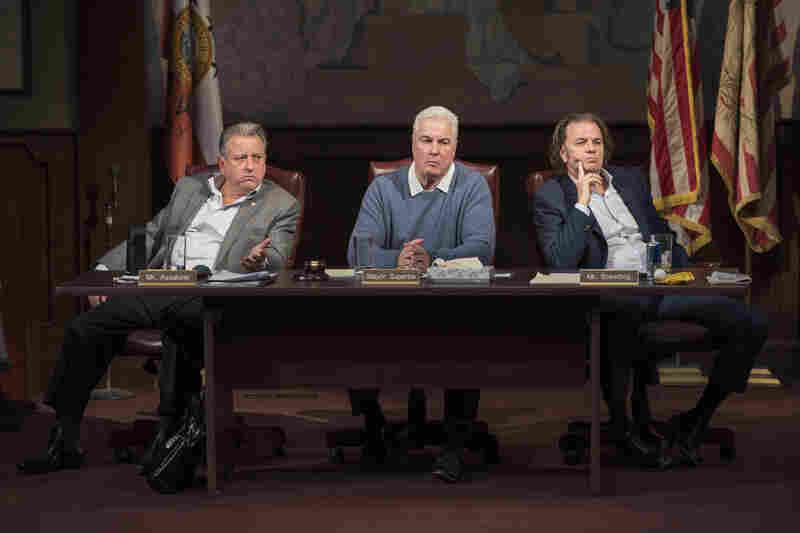 William Petersen (center), who starred on CSI for over 10 years, plays the mayor of a small town in The Minutes. He's flanked by Jeff Still as Mr. Assalone (left) and Kevin Anderson as Mr. Breeding. Michael Brosilow/Courtesy of Steppenwolf Theatre Company hide caption 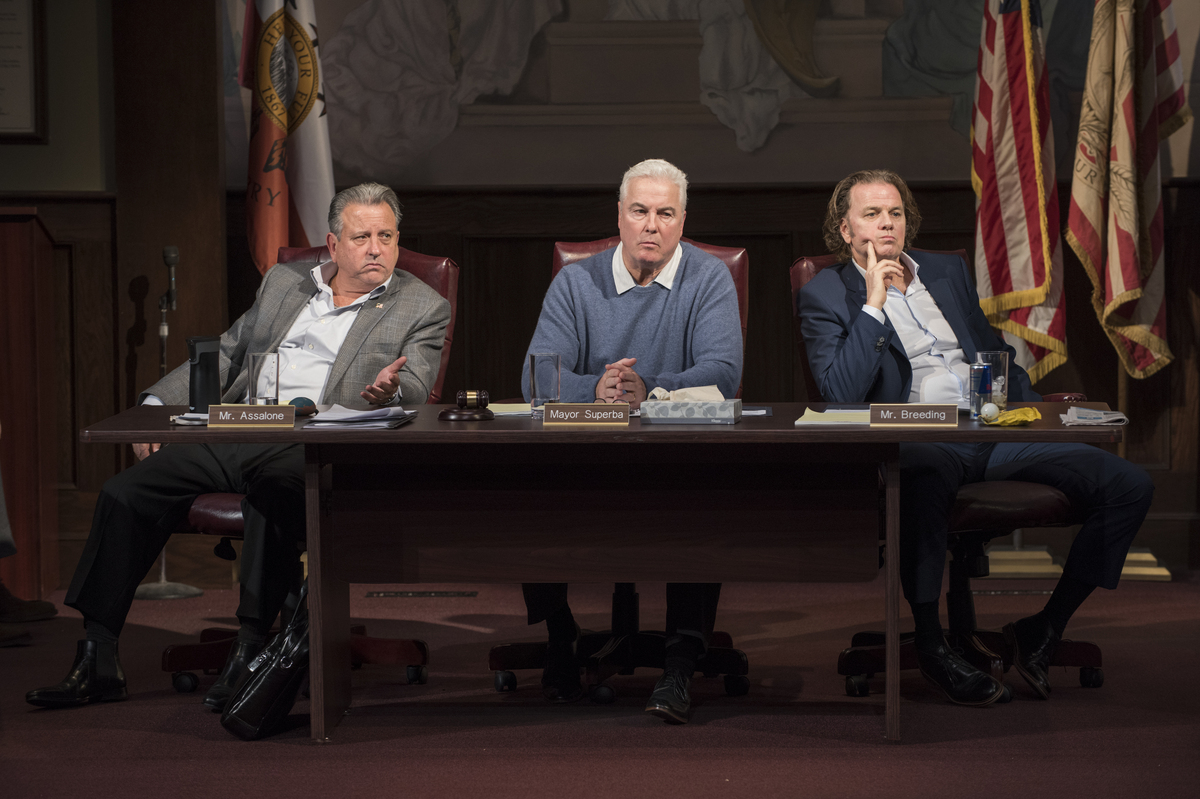 William Petersen (center), who starred on CSI for over 10 years, plays the mayor of a small town in The Minutes. He's flanked by Jeff Still as Mr. Assalone (left) and Kevin Anderson as Mr. Breeding.

William Petersen starred in the hit TV show CSI for over a decade. He's also a Chicago-area native, and a Steppenwolf ensemble member. He first performed with the company more than 35 years ago. He plays the mayor in The Minutes.

"I felt that it had meaning and impact," Petersen says. "And it was entertaining, and it allowed ourselves to look at ourselves in — in a different way than we have been over the last 12 months."

It's Petersen's character, the mayor, who ultimately allows the truth to come out: What happened to the missing council member Mr. Carp, and why. The answer involves community complicity in a creation myth — one that hides how the town was really founded, and on whose backs.

The young councilman is appalled, but the mayor makes a pitch: You're a new dad. Before you commit to rocking this boat, remember that your daughter's in it too.

The mayor gets the play's best lines, and playwright Tracy Letts says that's the point.

"It's easy to vilify people for their ideas," Letts says. "It's easy to demonize them. I was more interested in the idea that: Let's listen to his vision of the world. Test it and see if you agree or if you disagree. Are you complicit or not complicit?"

The Minutes will test Chicago audiences with that uncomfortable question through Jan. 7. Then, there's been talk of the play moving to Broadway.