Accessibility links
Cemeteries Turn To Swamps As Alaska's Permafrost Melts A cemetery in rural Alaska that was built into the permanently frozen layer of soil is at risk now that the permafrost is melting. 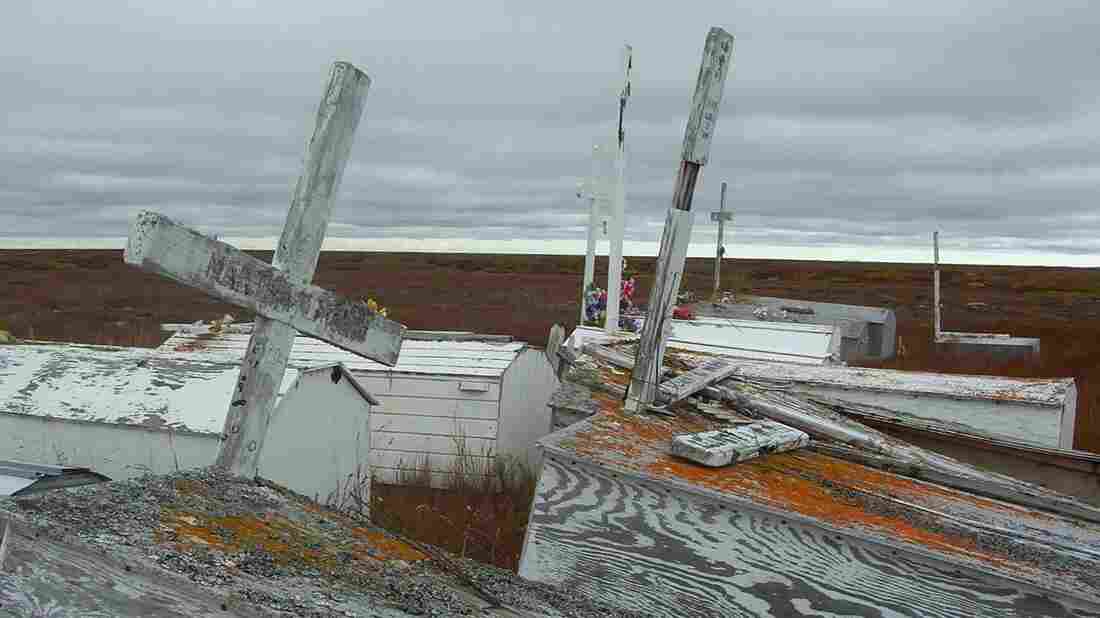 As the permafrost thaws, Kongiganak's cemetery is turning into swampland. Community members are now laying their loved ones to rest on raised platforms above the ground. Teresa Cotsirilos/KYUK hide caption 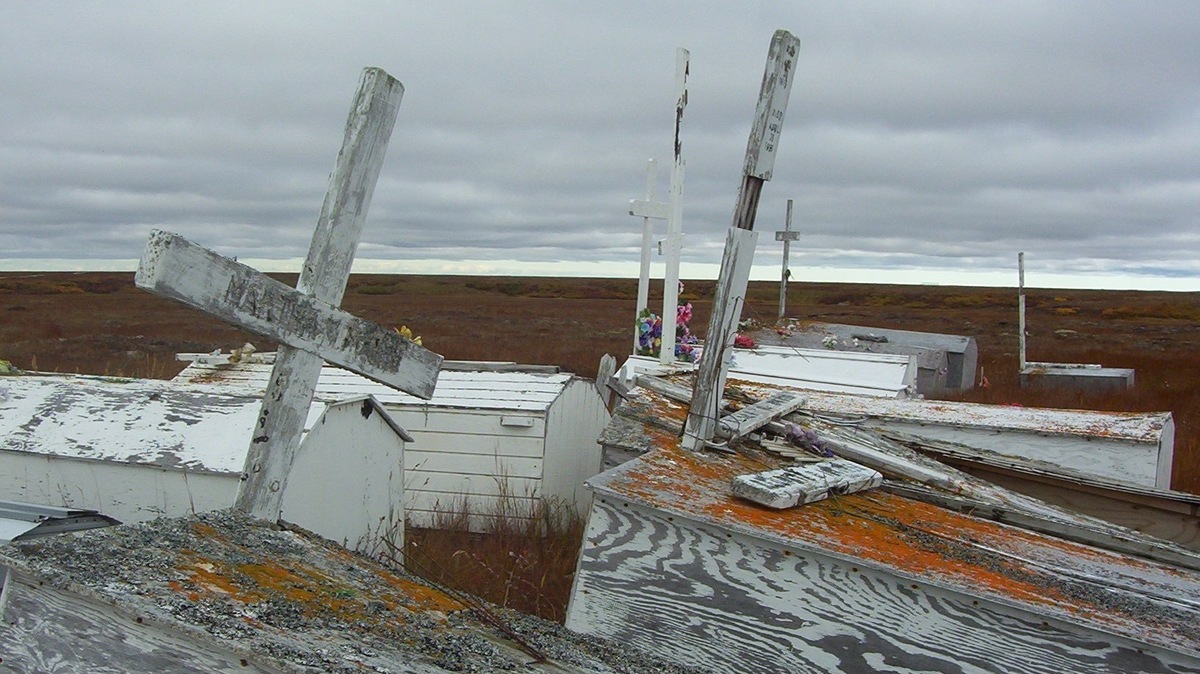 As the permafrost thaws, Kongiganak's cemetery is turning into swampland. Community members are now laying their loved ones to rest on raised platforms above the ground.

This past September, after Maggie Mary Otto passed away, the village of Kongiganak, Alaska — also known as Kong — celebrated her life with a four-course feast. People filed into the old high school gym and piled their plates with seal stew and walrus meat, while children wrestled by the bleachers. It was crowded. Mrs. Otto was an elder and the de facto marriage counselor in town. She was beloved.

Mrs. Otto's daughter, Betty Phillip, sat in a corner. They put her mother to rest on high ground, she said, but not all of her family in Kong is so lucky.

"Her dad and my grandpa," Phillip said. "He's one of them that's under the water."

Most Alaska Native villages in the western part of the state are built on permafrost — a thick layer of frozen soil. But as the climate changes, that permafrost is starting to thaw. Kong's cemetery is melting and becoming a swampy lake. People are watching the graves of their loved ones sink out of sight.

If she wears the right rubber boots, Phillip says, she can wade close to her grandfather's grave, but can't quite touch his cross.

Others tell similar stories. Hannah Jimmy says her parents, aunts, uncles, sister and best friend are all in the cemetery, buried together in a single row. They're underwater now.

"We're so poor we can't even do anything about it," Jimmy says. 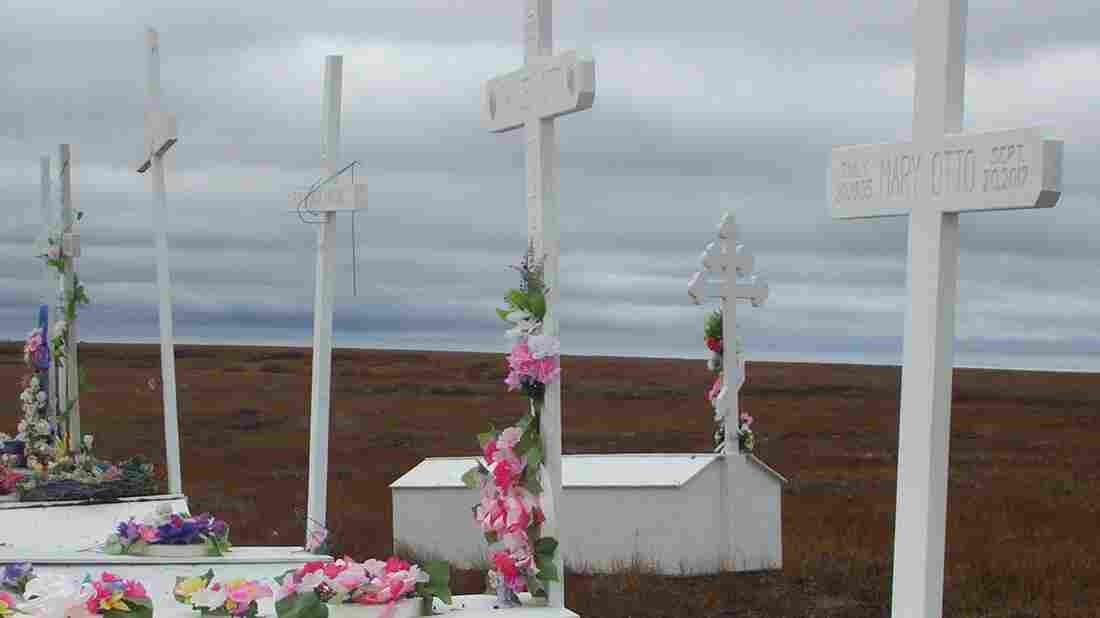 An elder and de facto marriage counselor in Kong, Maggie Mary Otto passed away this past September. The community laid her to rest on higher ground. Teresa Cotsirilos/KYUK hide caption 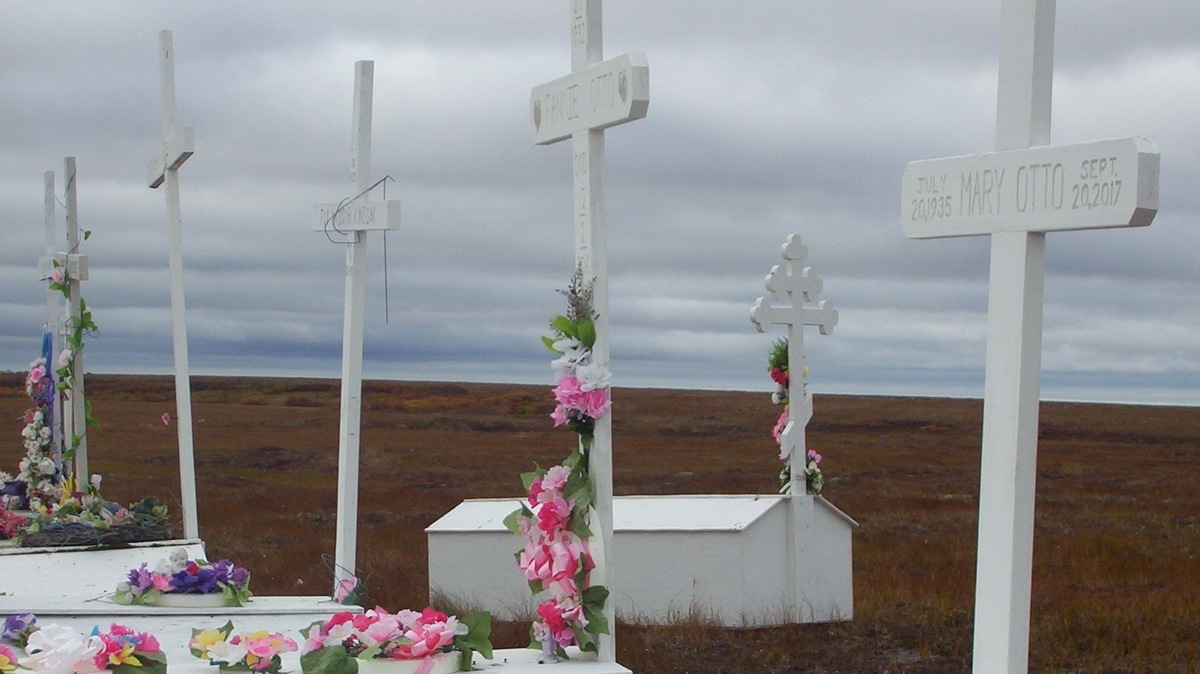 An elder and de facto marriage counselor in Kong, Maggie Mary Otto passed away this past September. The community laid her to rest on higher ground.

Roland Andrew, Kong's tribal administrator, walks through the cemetery. It's a smattering of white crosses on a rust-colored hill, about 10 minutes from town. Andrew points to a slanted cross that belongs to a friend.

"When I was planning on starting a band he was my keyboardist," he says with a chuckle. "That's what we were into when he was alive."

That friend passed away in 2005. By then, burials in the cemetery had already been a problem for about a decade.

"After we dug down 6 feet," Andrew says, "it created a lake around it."

The swamp that appeared slowly expanded. Now, crosses stick out of the sunken ground at odd angles — some of them almost completely submerged in water. As the markers sank, some older wood coffins started to rot.

In at least one case, "there were some bones," Andrew says. "So they put it to higher ground from the lowland area."

He says they're trying to move all graves to higher ground but don't have the money yet.

After 87 Years At The Smithsonian, Bones Of Alaska Natives Returned And Reburied

Digging into melting permafrost can weaken it even more. And places where there's been a lot of digging — like a cemetery — can be the first to go.

So, about 10 years ago, Kong stopped burying its dead.

Cremation is not part of the culture here. So when it was time to bury Mrs. Otto, her family tried something else. Rather than lowering her body into the ground, her pallbearers placed her casket on a low wooden platform, raised about six inches above the ground on blocks.

Six men lifted a white, wooden box and placed it over Mrs. Otto's casket, covering it completely. This way of laying people to rest has slowed the swamp's expansion — though it's not clear if it's stopped it.

The cemetery isn't the only part of Kong that's sinking. The entire hill the village stands on is slowly slipping to sea level, too. But Roland Andrew says he's not planning to move.

The cemetery in a nearby village is also sinking, and their homes are flooding more too. They're talking about moving here.