Accessibility links
Post-Alabama, Democrats See A Slim Path To A Senate Majority, But Challenges Rem An unlikely win in Alabama gives Democrats an elusive third target they may need to flip the Senate, but a difficult map remains. There are signs, however, of a blue wave forming in 2018. 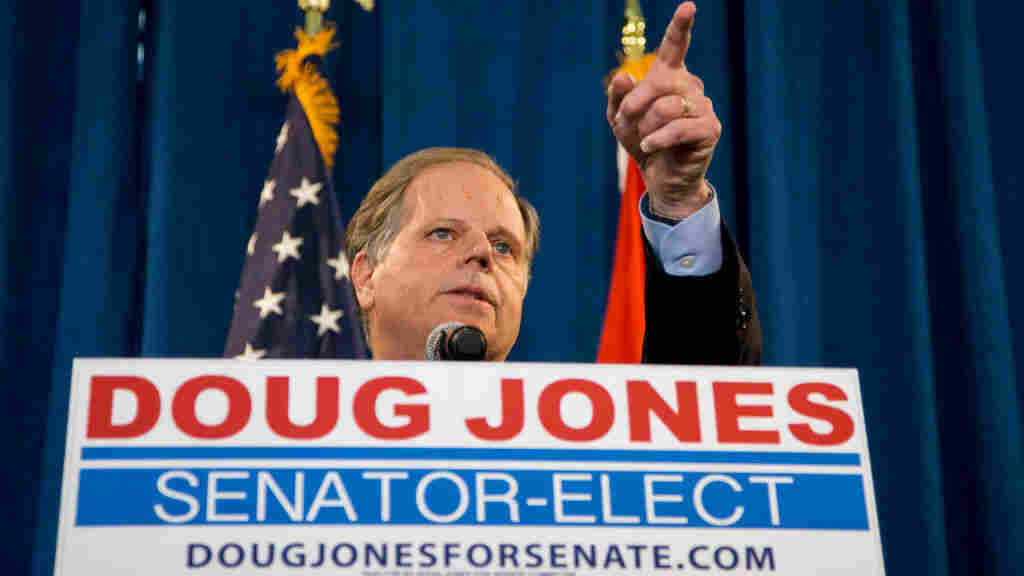 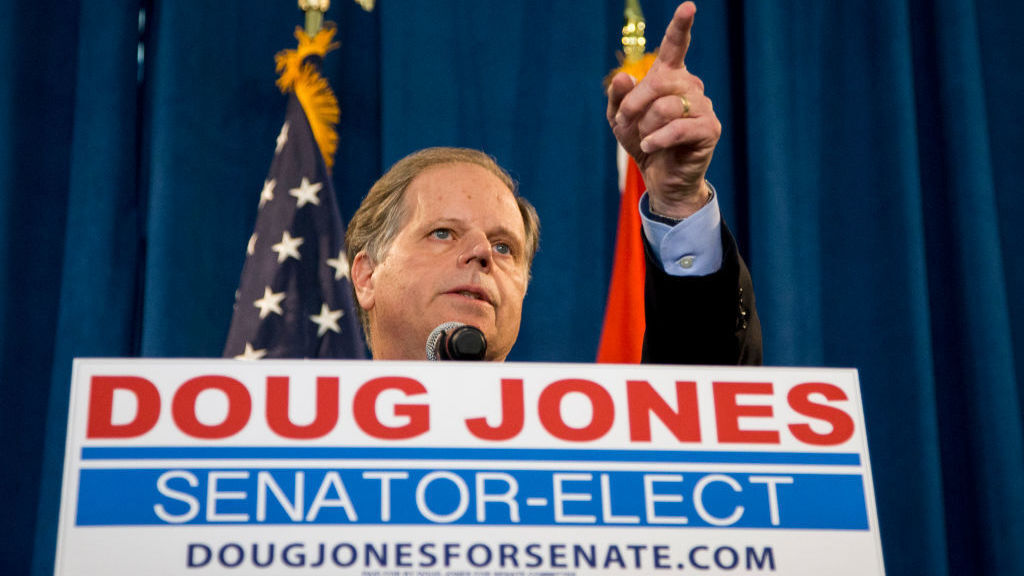 Senator-elect Doug Jones, D-Ala., speaks to the press last week after his win in the Alabama special election.

Democrats have a path to a Senate majority in 2018 after an upset win by Doug Jones in last Tuesday's Alabama Senate special election.

That was something thought to be a near impossibility at the start of the Trump presidency.

The win in Alabama now gives Democrats the elusive third target seat they had been looking for, which they needed given they're defending 10 incumbents who sit in states that Trump won last November.

Some Republicans, though, see the party as having dodged a major bullet with the loss by controversial GOP nominee Roy Moore. Republicans breathing a sigh of relief argue that they now don't have to deal with questions of whether to seat or expel the man accused by multiple women of sexual assault against them when they were teen girls — and Democrats can no longer can hang Moore's alleged crimes around their necks heading into the midterms.

"I never thought I would be so relieved to have a Democrat win a Senate seat," GOP strategist Alex Conant told NPR's Morning Edition. "But if Roy Moore was coming to D.C. next week as the newly minted Republican senator from Alabama, it would just create a whole host of problems for the party that we then have to carry with us into 2018. So I'd rather lose one seat than have to deal with that all next year."

Still, the Alabama win — as unlikely a confluence of unique circumstances as it was — only exposes further an enthusiasm gap that was apparent in other special election Democratic near-misses this past year. Democratic voters have shown themselves to be fired up, while many Republicans have sat on the sidelines.

That is a major worry GOP strategists privately fret about as they go about trying to defend their Senate and House majorities in 2018. (Their fragile Senate majority shrunk to just one seat on Tuesday.)

Republicans hope they can combat voter ennui with the tax bill they're on the cusp of passing, giving them a big legislative victory to point to in a year of other congressional failures. But polls have shown the bill is unpopular.

By numbers alone, Democrats now only have to net two seats in order to take back control of the Senate. They have two very obvious targets — Nevada and Arizona. Those seats were in play before Alabama, and they're also places where the GOP could be saddled with worrisome nominees as well.

"After a stunning Democratic win in Alabama, Senate Republicans are rushing to duck responsibility and blame all of their problems on Roy Moore. But make no mistake: the same trends that our counterparts want to gloss over are emerging in Senate races across the country," the Democratic Senatorial Campaign Committee boasted in a memo last week. "Massive recruitment failures are leading to destabilizing primaries, and now even the most extreme candidates know that they can count on the GOP's ultimate support, just like Roy Moore before them."

It's the only GOP-held seat up in 2018 in a state that Hillary Clinton carried. Incumbent Dean Heller is facing both a tough primary and general election.

2018 Midterms: What To Watch For One Year Out

Republicans worry that if the Steve Bannon-backed Danny Tarkanian emerges as the nominee, that seat is probably gone to likely Democratic nominee, congresswoman Jacky Rosen. Tarkanian, the son of a former legendary UNLV basketball coach, has proven he can win GOP primaries but has lost winnable general-election races in the past, most recently to Rosen in 2016.

Even if Heller wins the primary, he faces a tough contest.

Outspoken Trump critic GOP Sen. Jeff Flake is retiring instead of facing a tough primary. If the Bannon-backed Kelly Ward wins the GOP primary, Republicans may well write off the seat.

But the state has a late filing deadline and primary, and other candidates, namely Republican Rep. Martha McSally, could still jump in. Whoever wins will likely face Democratic Rep. Kyrsten Sinema in what will be a top-tier race.

Democrats have other unexpected new targets, too — in Tennessee and Texas.

Former Tennessee Democratic Gov. Phil Bredesen's decision to join the open Senate race in the Volunteer State gives Democrats a top recruit, but without a scandal-plagued opponent, it won't be as easy to replicate the same Alabama success in another Southern state that Trump handily won.

Still a tough map for Democrats

Moore's victory doesn't change the fact that it's still an incredibly difficult map for Democrats. They have to have a perfect night on Election Night in 2018 to even have a chance at a one-seat majority.

To pull it off, they have to hold the line and make sure any gains they make aren't offset by losses of their own. Democrats, after all, are defending seats in tough places for them, like Missouri, North Dakota, West Virginia and other red states.

And they got a new headache when Minnesota Democratic Sen. Al Franken — brought down by sexual harassment allegations — announced he would resign. Democratic Lt. Gov. Tina Smith was appointed to take his place until a 2018 special election, and she said she will run for the seat. That could provoke the grassroots on the left, who want to have a voice in choosing the next senator.

Remember, Clinton only won Minnesota by 1.5 percentage points, and Democrats are now forced to defend two seats in the state in 2018 with Democratic Sen. Amy Klobuchar also on the ballot.

Bannon's bark bigger than his bite? 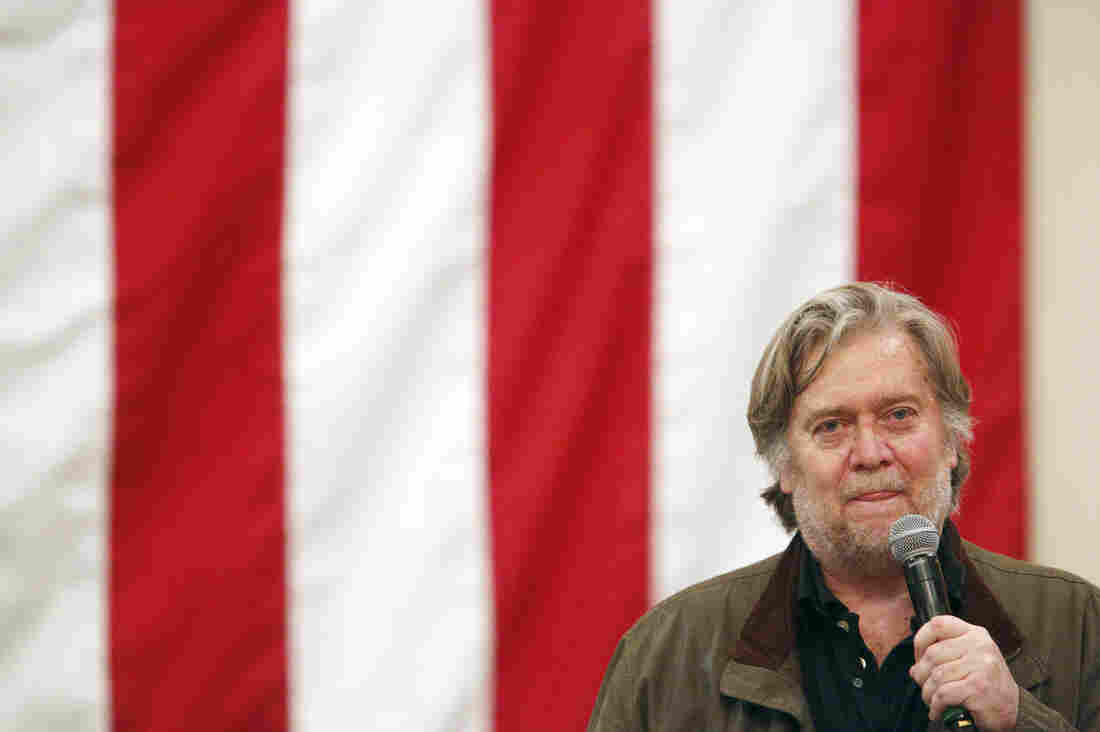 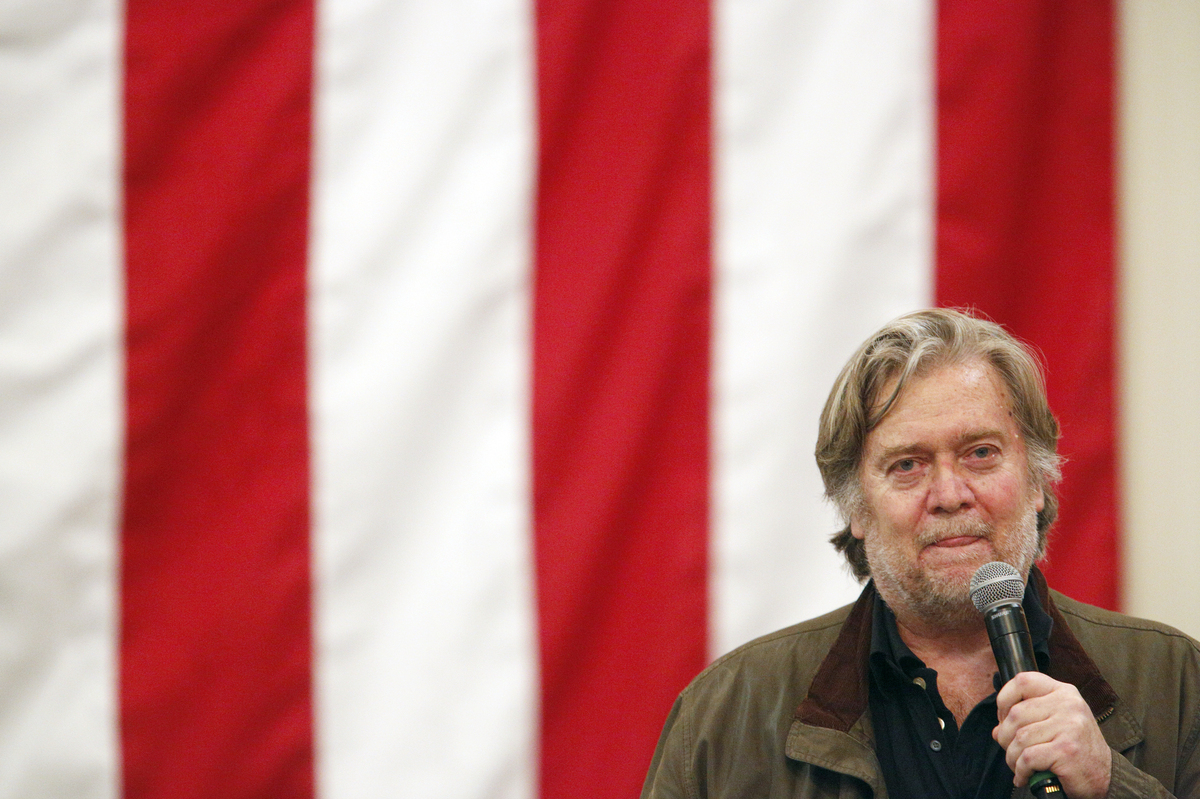 The biggest implication coming out of Alabama could be that Bannon's boasting about taking on the GOP establishment may end up only being bluster.

Bannon had touted Moore's primary victory over appointed Sen. Luther Strange as evidence that he could replicate that same formula in other races. (Strange had Senate Majority Leader Mitch McConnell's blessing, as well as President Trump's endorsement.)

Bannon has talked about taking on other incumbents like Mississippi's Roger Wicker, Nebraska's Deb Fischer and Wyoming's John Barrasso — simply because, in his eyes, they haven't stood up enough for President Trump strongly enough.

In reality, Bannon did little to help Moore's campaign other than to appear at rallies with him. He hitched his wagon to the controversial former Alabama Supreme Court chief justice late in the primary. Nonetheless, establishment Republicans were quick to point fingers at Bannon for helping saddle them with a problematic nominee.

"This is a brutal reminder that candidate quality matters regardless of where you are running," McConnell aligned Senate Leadership Fund President and CEO Steven Law said in a statement after Jones's win on Tuesday. "Not only did Steve Bannon cost us a critical Senate seat in one of the most Republican states in the country, but he also dragged the president of the United States into his fiasco."

In an interview with the New York Times, Bannon remained undeterred post-Alabama. He even blamed McConnell and "Never Trumpers" for Moore's loss. McConnell and other GOP leaders had pulled support from Moore in the wake of the allegations of sexual assault.

"Revolutions and civil wars take a long time," Bannon said. "I never said Alabama was going to solve anything."

A critical question heading into 2018 will be whether Trump follows his former political consigliere's lead — which he did in backing the embattled Moore after endorsing Strange early on — or if he doubles down on support of GOP incumbents.

Signs for 2018 from Alabama

It's unlikely there will be the same perfect storm of problems for Republicans that beset them in Alabama in the upcoming midterms, but Alabama did underscore some fundamental problems the GOP still has heading into an important election year.

Democratic enthusiasm on the rise

Alabama finally gave Democrats an elusive win in a special election in 2017, after falling short in several other contested races. But the shift on typically red turf over the past year is something that can't be ignored.

FiveThirtyEight's Harry Enten laid out the numbers showing the enthusiasm shift to Democrats:

Yes, AL-SEN is a bit of an outlier, but this table tells the story. This a terrible national environment for the GOP. pic.twitter.com/l2OGkfRQHY

An anti-Trump message has worked in a moderate state

The Alabama victory comes after Republican losses in both the Virginia and New Jersey gubernatorial races. Virginia should worry Republicans most, given it was a more purple-to-light-blue state, where Democrats successfully rode an anti-Trump message to victory.

Trump's approval rating continues to sit at record lows and Democrats have been maintaining a solid advantage in the congressional-ballot preference. A Monmouth University poll last week, for example, gave the party a 15-point edge. An NBC/Wall Street Journal poll out Sunday showed Democrats plus-11 and at 50 percent for the first time since September 2008.

Those kind of numbers have historically been an indicator of a coming wave election.

These were problems Republicans had before Alabama. Alabama was a setback for Republicans when it comes to the Senate math, but it did little to change the fundamental challenges for Democrats.

The House was, and is, in play — and flipping that chamber remains a distant but distinct possibility for Democrats.

Now, they have a path forward for the Senate as well.