Accessibility links
Why Trump Continues to Forge An Unlikely Bond with Religious Conservatives It is not that conservative evangelicals think Trump is one of them, but rather that they believe he is being used by God. As the Bible says, "By their fruits ye shall know them." (Matthew 7:20) 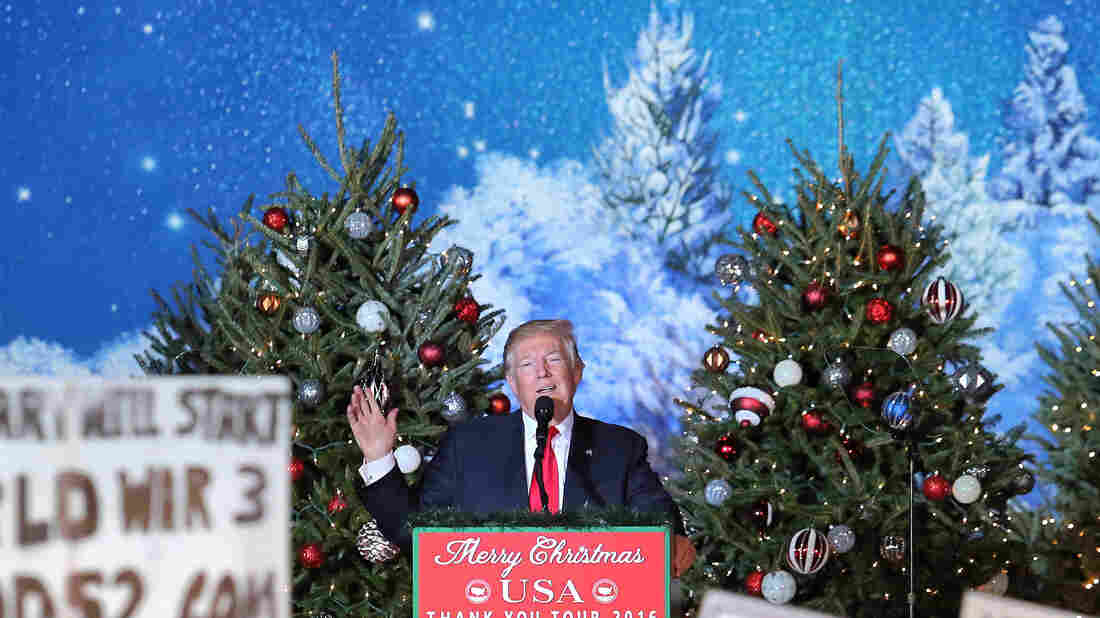 President Trump has won over religious conservatives with promises of Supreme Court nominees, hard-line support for Israel and a host of other items. Orlando Sentinel/TNS via Getty Images hide caption 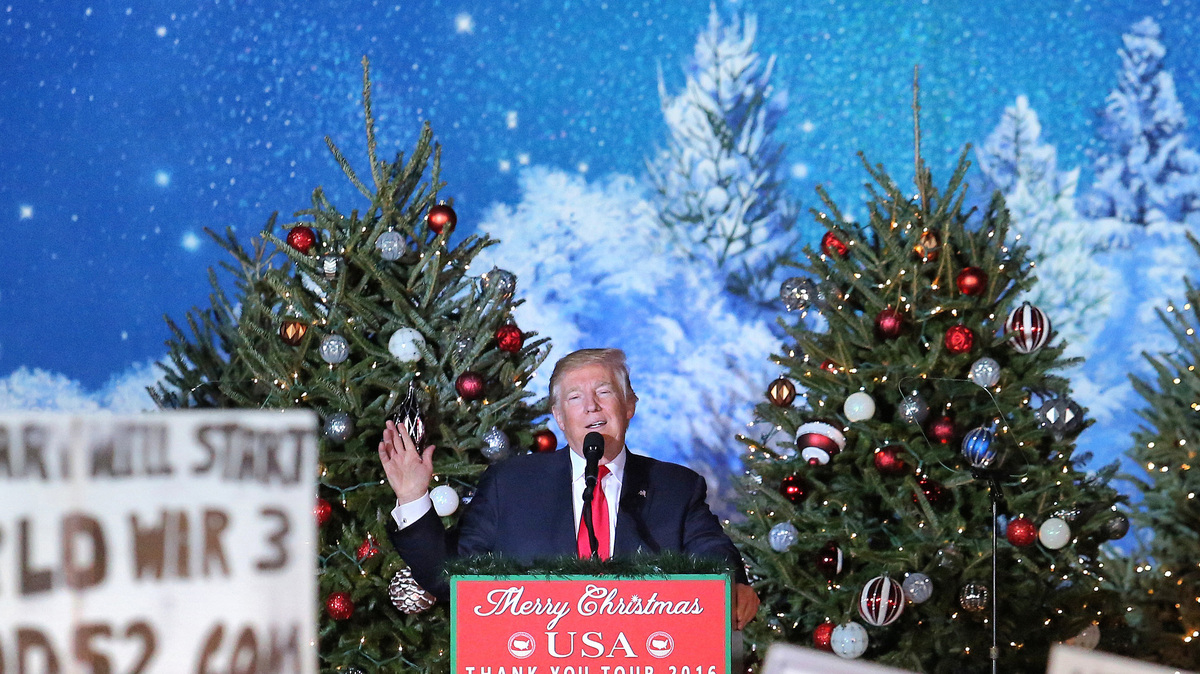 President Trump has won over religious conservatives with promises of Supreme Court nominees, hard-line support for Israel and a host of other items.

A Senate election in Alabama. A Republican tax bill moving through Congress. Violent protests in the Middle East following U.S. recognition of Jerusalem as the capital of Israel.

What could these widely disparate matters have in common, besides heavy news coverage? It turns out that they all have enabled President Trump to send a message to one distinct and crucial category of his supporters.

It is not that evangelicals think Trump is one of them, but rather that they believe he is being used by God. As the Bible says, 'By their fruits ye shall know them,' (Matthew 7:20) and so far Trump's crop has looked pretty good.

We are talking about white evangelical Protestants, especially the core of "born again" or "fundamentalist" believers among them. As voters, they went overwhelmingly for Trump in 2016 — more than 80 percent in the November election, according to exit polls — the highest degree of loyalty the group has ever shown a presidential candidate.

These same voters are today disproportionately numerous within that shrinking fraction of Americans who still approve of Trump's performance in office (which is down to roughly a third in the Gallup and other polls).

In return, these loyal backers should find some special gifts under their Christmas trees this year, not the least of which is President Trump's preference for celebrating "Christmas" rather than "the holiday season."

All this comes as a surprise to those who had thought Trump an improbable champion for people who prioritize religion.

The last president to have this kind of support from "born again" white evangelicals was George W. Bush, who had a storied past as a party boy but also a conversion story worthy of the biblical prodigal son. When asked in a presidential debate to name his favorite political philosopher, he named Jesus.

Trump, on the other hand, has no such personal testimony. He has an ancestral association with the Presbyterians but has never been known as a churchman. Indeed, he has made his way in the worldliest of worldly occupations and appeared on the cover of Playboy. His three marriages and serial sexual episodes are scarcely the stuff of Sunday school lessons.

He has said he does not feel a need to repent or ask forgiveness. And when he tried to show familiarity with a Bible verse last year by saying it was from "Two Corinthians," actual Bible readers everywhere either laughed out loud or cringed.

So it surprises some to see how readily many committed church people flock to his standard. But the explanation is both simple and neat. It is not that evangelicals think Trump is one of them, but rather that they believe he is being used by God.

As the Bible says, "By their fruits ye shall know them," (Matthew 7:20) and so far Trump's crop has looked pretty good.

The reasoning then follows like this: Trump may not seem worthy as an instrument of the Lord's will, but that judgment is not ours to make and belongs to someone else. So as long as Trump seems to be doing the Lord's work, Trump will be just fine with the people of the Lord.

Trump gets his best support among those evangelicals who are most conservative, both politically and theologically. They are the most likely both to be Republican and to take the Bible as the literal word of God — or "jot and tittle," as some used to say.

Are You An Evangelical? Are You Sure?

They are staunchly anti-abortion and opposed to same sex-marriage (or same-sex liaisons of any kind). They strongly favor the return of prayer in the schools and of explicitly Christian prayers at public events. They do not want transgender people in the military, or in their bathrooms.

Trump had already changed his positions on salient social issues such as these in the 2016 Republican primaries, where he did surprisingly well among self-described religious conservatives (especially in the crucial South Carolina primary). Some expected him to switch back in the general election, or in office.

Instead, he doubled down on commitments to these voters in the fall, emphasizing a pledge to appoint Supreme Court justices in the mold of the late Antonin Scalia. His first appointee, Justice Neil Gorsuch, was a promise fulfilled.

Yet Trump continued to deliver after that, as a scan of one recent week's news stories clearly demonstrates.

Moore for the core 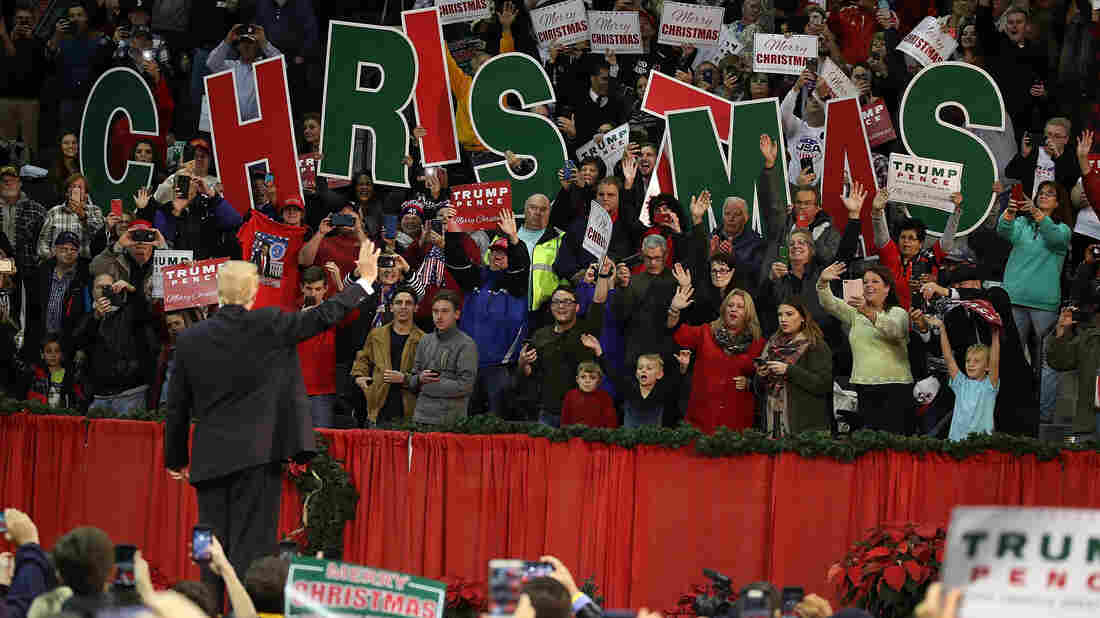 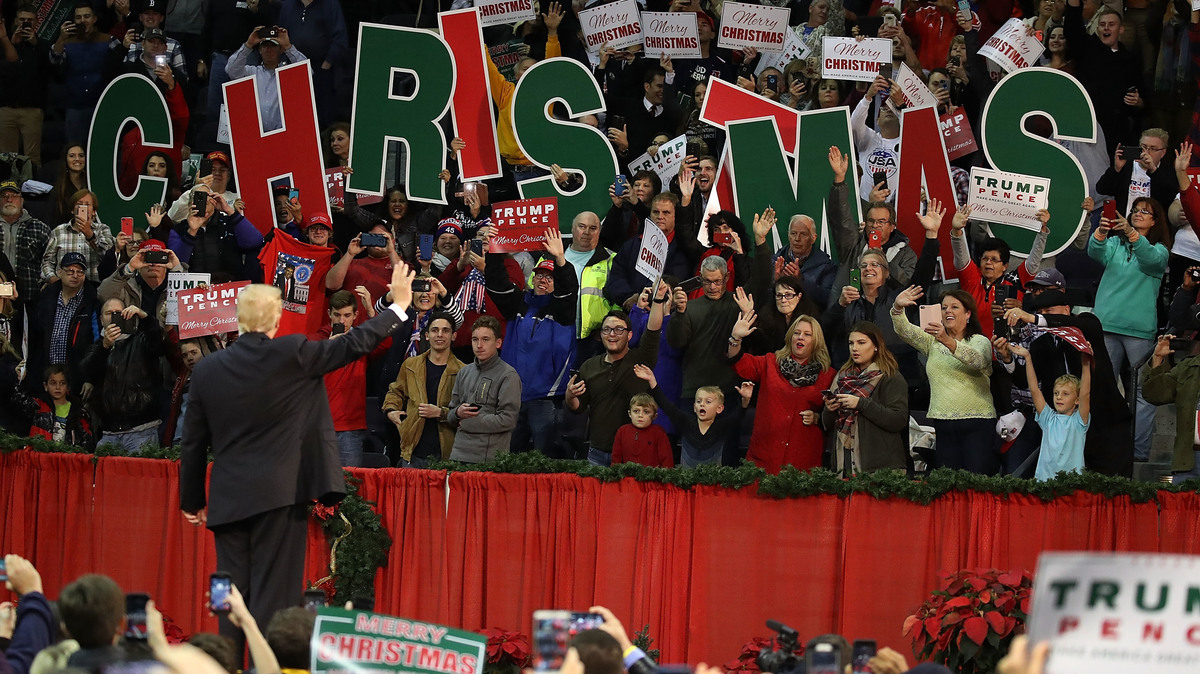 Let's start with Alabama, where longtime hero of the ultraright Roy Moore came within a hair's breadth of claiming a seat in the U.S. Senate. Moore is revered by many religious conservatives for his stone Ten Commandments monument and his adamant refusal to enforce U.S. Supreme Court orders on same-sex marriage.

Those issues had caused him to be removed as chief justice of the Alabama Supreme Court — not once, but twice.

Moore's explicit use of religion (his campaign events often resembled revival meetings) had been central to his political persona for years. But it became especially critical after multiple women accused him of sexually harassing or assaulting them when they were teenagers (and he was not).

Many GOP leaders urged Moore to withdraw, but not Trump. In fact, the president soon slid from "let the people of Alabama decide" to full-throated exhortations to "vote Roy Moore." He held a rally just across the state line practically on the eve of the vote, shouting his support for Moore.

Surely the president had every reason to back the nominee of his party when its margin of Senate majority is so slim. But he also needed to be in the corner of the people who still passionately believed in Moore as a bona fide modern Christian martyr.

The sense of being persecuted in contemporary America and besieged by global Islam is a common conviction among many of the president's backers. These include millions of families who have withdrawn from the public school system, educating their children in church or charter schools or at home to escape the secularism and perceived hostility to religion in the public schools.

Many of these families will be among the favored groups finding special blessings in the tax bill Congress is set to pass this week. Thanks to Sen. Ted Cruz, R-Texas, and others, people who opt out of the public school system will get access to tax-advantaged savings plans to help pay for their alternatives.

In one disappointment for many religious activists, the tax bill leaves intact a provision of the IRS code forbidding the active promotion of candidates for political office by churches — unless they want to risk losing their tax-exempt status.

But even that defeat serves to spotlight Trump's highly visible efforts to remove that provision on the activists' behalf.

He even organized a last-minute effort to lobby for its removal with allies such as Ralph Reed. (Once famous as the leader of the Christian Coalition, Reed is now billed as the founder of the Faith and Freedom Coalition.) 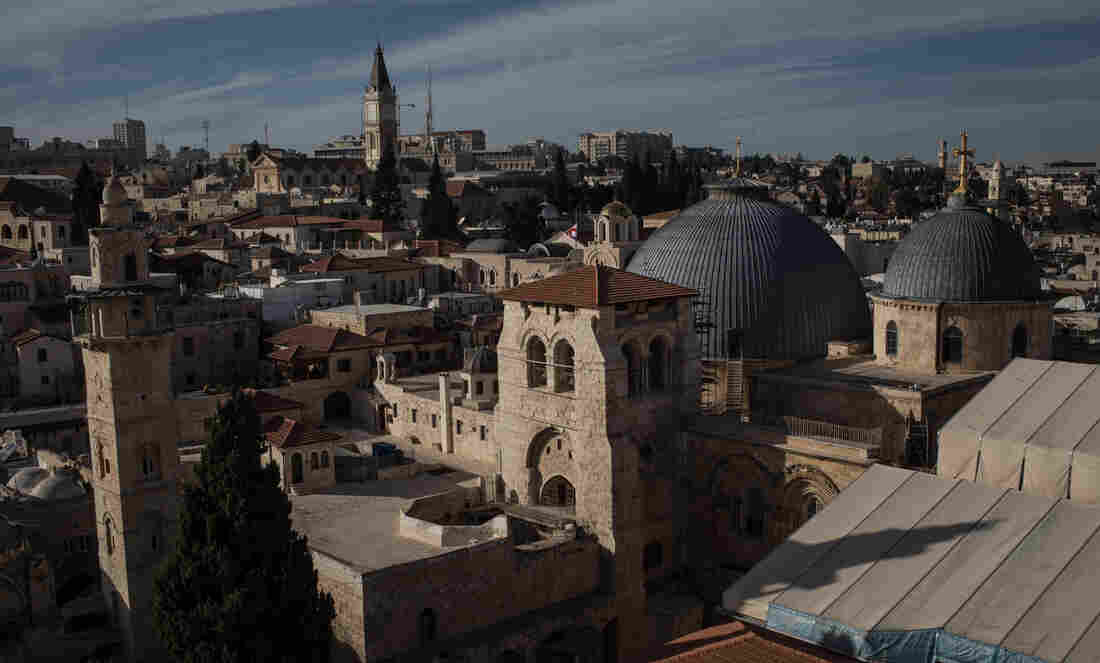 The Church of the Holy Sepulchre is seen in the Old City in Jerusalem earlier this month. The "final status" of Jerusalem as a formal matter remains a major sticking point in negotiations at the heart of the Middle East peace process. Chris McGrath/Getty Images hide caption 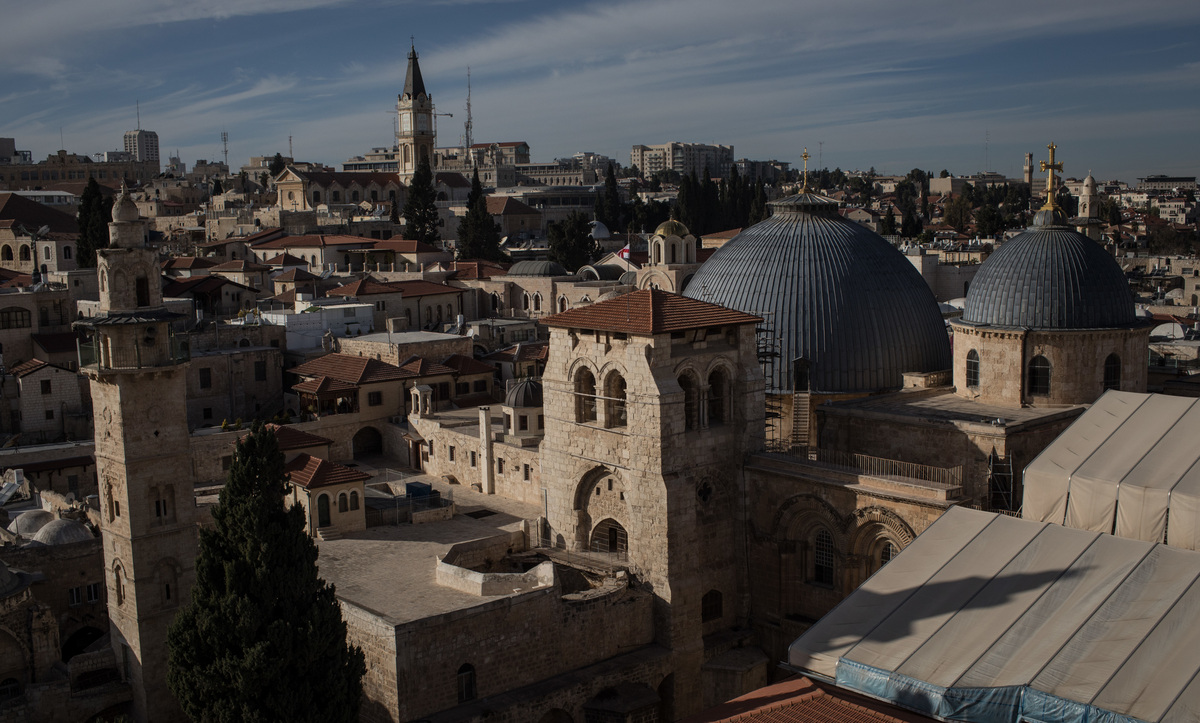 The Church of the Holy Sepulchre is seen in the Old City in Jerusalem earlier this month. The "final status" of Jerusalem as a formal matter remains a major sticking point in negotiations at the heart of the Middle East peace process.

Trump supporters on the religious right sometimes point to Trump antecedents in the Bible, where the Lord used one imperfect vessel after another to work his will. One was the Persian conqueror Cyrus, who allowed some of the Judeans captive in his country to return home and rebuild the Temple of Solomon around the year 500 B.C. (Check out the Old Testament book of Ezra for more details.)

That example is relevant, because Jerusalem and the temple remain live issues today, 25 centuries later. Trump's recent decision to recognize Jerusalem as the official capital of Israel (and to move the U.S. Embassy there) has set off deadly riots in much of the region. It has also resonated deeply with some Americans who fervently support it.

"Evangelicals are ecstatic about this move," said the Rev. Jim Jeffress of the First Baptist Church of Dallas on Fox News.

Such extreme reactions, both negative and positive, tend to leave many news consumers bemused. Most Americans probably thought Jerusalem already was the capital of Israel. It's certainly a better-known news dateline than Tel Aviv.

Yet the "final status" of Jerusalem as a formal matter is a major sticking point in negotiations at the heart of the Middle East peace process. Generations of diplomats have wrestled over the control of the city's holy sites and the city's role in resolving the larger Palestinian issue.

That's why Muslims everywhere are upset at Trump's jumping the gun. Jews favor Jerusalem as the capital, but many also support the notion of a negotiated settlement.

Trump, though, seems more focused on the view of those conservative Christians who see this step as fulfilling a key biblical prophecy. In this view, Jerusalem needs to be available as the site of the Third Temple, a necessary precondition for the end times or last things that are essential to many fundamentalist Christians' faith.

This is where the water gets a little deep, so we won't wade in too far. But suffice it to say that at some point in time, according to various passages in the Bible, Jews will be in possession of Jerusalem and a new temple will be erected. Thereafter will come the Antichrist and a period to be known as the Tribulation. It gets harrowing, but, cutting to the chase, Christ himself will return to Earth in triumph and glory and all true believers will be united with him in heaven.

How much of this Trump personally understands or buys into is open to debate. But he has shown a keen desire to court those who take the prophecy at face value and with all their hearts. That courtship has been highly successful, at least so far.

One last reason the president has a connection to these elements of his following is their shared sense of themselves as outsiders. They are populists pushing back against the judgments of the elite and against the establishment in religion and in government.

And for now, at least, what unites Trump with these unlikely allies outweighs whatever divides them.