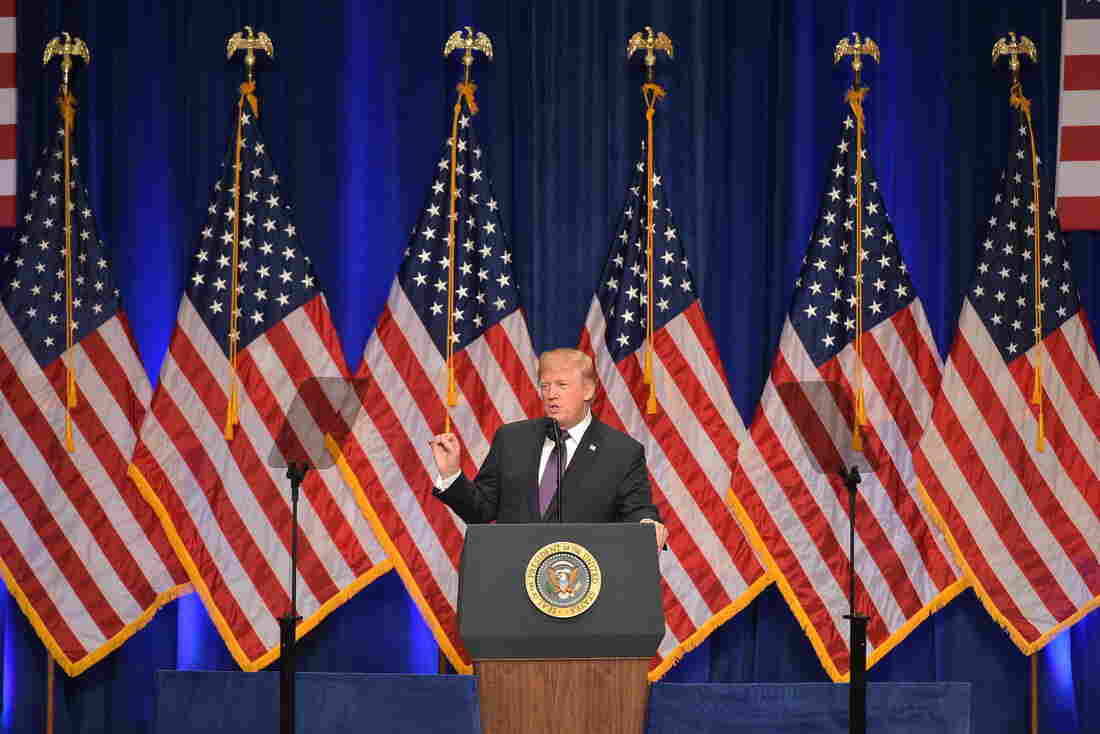 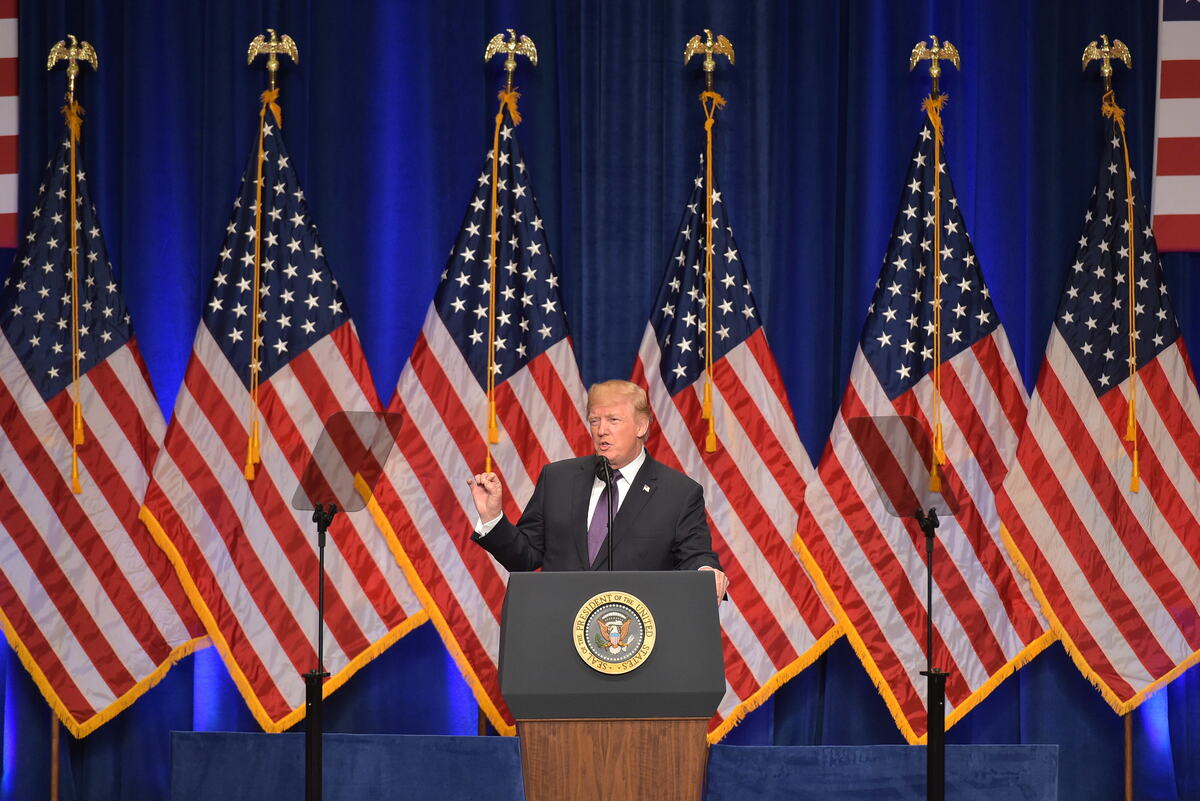 President Trump outlined his goals for military modernization and economic advancement Monday, as he unveiled his national security strategy in a speech in Washington.

The strategy document — which every president is required by law to produce — offers a blueprint for Trump's military and foreign policy. It could help to guide future decisions on defense spending, trade negotiations and international cooperation.

"What we have built here in America is precious and unique," Trump said. "We must love and defend it, we must guard it with vigilance and spirit, and if necessary, like so many before us, with our very lives."

The security strategy is built around four pillars: protecting the homeland, promoting prosperity, peace through strength, and advancing American influence.

The document, as well as Trump's speech on Monday, has clear echoes of things Trump said on the campaign trail in 2016.

"Unfair trade practices had weakened our economy and exported our jobs overseas. Unfair burden-sharing with our allies and inadequate investment in our own defense had invited danger from those who wish us harm," Trump wrote in the document's introduction. "Nearly one year later, although serious challenges remain, we are charting a new and very different course."

The document identifies three types of challenges: revisionist powers such as Russia and China, rogue regimes like North Korea and transnational actors such as ISIS.

The strategy acknowledges that some players may be both allies and competitors. The United States is counting on China, for example, to help contain North Korea's nuclear threat, even as the administration tries to counter what it sees as China's unfair trading practices.

Likewise, the U.S. remains wary of Russia's movements in Ukraine. But that didn't stop the CIA from sharing intelligence with Russia to help foil a potential terrorist plot in St. Petersburg — actions that prompted a thank you call to Trump over the weekend from Russian President Vladimir Putin.

"President Trump stressed the importance of intelligence cooperation to defeat terrorists wherever they may be," the White House said in a statement detailing the call.

Trump has campaigned for a substantial buildup in U.S. military forces.

But it's not clear Congress will provide the necessary funding. Lawmakers are still operating under budget caps negotiated in 2011.

While congressional Republicans have pushed to lift the cap on defense spending, Democrats have demanded a corresponding increase in domestic programs. The likely passage of a GOP tax bill, which is expected to drain $1 trillion from the U.S. Treasury over the next decade, won't make this political contest any easier.

"Unless the president is able to pull a rabbit out of his hat and get Congress to significantly raise or eliminate the budget caps, I don't think a significant increase in the size of the military is likely to happen," said Todd Harrison, a defense analyst at the Center for Strategic and International Studies.

An alternative approach, Harrison says, would be to dial back the demands on the military. But while Trump talked during the campaign about reducing or ending America's security obligations overseas, he has since reaffirmed the U.S. commitment to defending allies in Europe and Asia.

"For years we've had a strategy that says we'll do A, B and C, but only the funding available to do A. And we never made the strategy and the resources line up together," said Jacob Cohn of the Center for Strategic and Budgetary Assessments.

The national security strategy highlights the link between a strong domestic economy and national defense. Administration officials quoted Defense Secretary Jim Mattis, who has said a strong economy is one of his most powerful weapons.

Trump's concerns with U.S. trade policy are woven throughout the security strategy. One of his first acts as president was to withdraw the U.S. from an Asia-Pacific trade pact, which Trump labeled a bad deal. The president has also called for renegotiating trade agreements with Mexico, Canada and South Korea.

Administration officials insist that cooperation with allies is a cornerstone of the national security strategy, adding that Trump's campaign slogan of "America First" does not mean "America alone."

But Trump on Monday again reiterated his view that the U.S. needs to tighten its immigration policies, and the strategy document lists the "construction of a border wall" as a "priority action."

Critics say the president has diminished America's international standing, by announcing his withdrawal from the Paris climate accord, criticizing the Iran nuclear deal and recognizing Jerusalem as the capital of Israel, in defiance of United Nations policy.

"It's hard to see how American influence in the world has really increased" since Trump took office, "and in most areas it's probably decreased," said Dan Drezner of the Fletcher School of Law and Diplomacy. "If you look at polling evidence, there is greater hostility across the rest of the world to positions of U.S. foreign policy."

Drezner notes that other countries continue to move forward with the climate accord, the Iran nuclear deal and the Asia-Pacific trade pact, despite U.S. opposition.

He sees little foundation for Trump's boast of greater "respect" on the international stage, other than personal flattery.

"What other countries have figured out, and this has been remarkably successful, is that Donald Trump views foreign policy through an entirely personal lens," Drezner said. "If he is treated well, he interprets that as America and American interests being treated well, even if that's not necessarily the case."