Accessibility links
Return To 'B Planet' In this Timely New Anthology In Bitch Planet: Triple Feature, creators Kelly Sue DeConnick and Valentine De Landro turn a score of talented writers and artists loose in the world of their futuristic feminist dystopia comic.

Return To 'B Planet' In this Timely New Anthology

Return To 'B Planet' In this Timely New Anthology 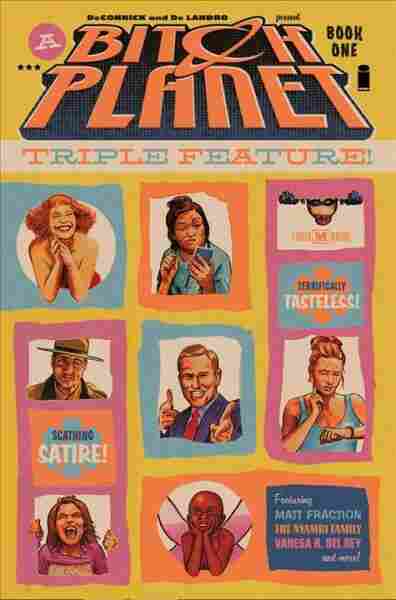 "Are you woman enough to survive ... Bitch Planet?" There's a double meaning to the question that's been emblazoned across Kelly Sue DeConnick and Valentine De Landro's feminist comic since it debuted in 2014. DeConnick and De Landro aren't just asking the reader whether she thinks she could stay alive in a planet-sized women's prison. They're also asking whether the reader is willing to face up to the connections they make between contemporary America and the comic's universe of state-sponsored misogyny. And now, DeConnick and De Landro are reframing their question for a couple dozen creators, let loose to play in that universe: Are you woman enough to draw... Bitch Planet?

Many of these writers and artists — not all of them women — live up to the challenge. The 15 stories in Triple Feature present a comprehensive fascist horrorscape. As in DeConnick and De Landro's original stories, women in this world are required by law to be "compliant:" attractive, docile and fertile. Any woman who's too independent is labeled "NC" ("non-compliant") and shipped off to the titular planet.

But the specter of a brutal women's space prison isn't actually the scariest thing in these stories. Far creepier are the women enthusiastically embracing "compliance." In Sara Woolley's "Bodymods," women graft wings, fins and tentacles onto themselves, resulting in a spectrum of grotesquerie that Woolley illustrates lavishly. "My fiancé collects mermaids ... He says I'm the prize in his collection!" gushes a character who's replaced her feet with ragged, veiny flippers. "So he decided on a beach wedding to go with my fins!"

In Matt Fraction and Elsa Charretier's "Everyone's Grandma is a Little Bit Feminist," a young woman alternately scoffs and winces when her grandmother recalls a time when women had careers and sometimes had sex with each other. "Nanna ... some things just aren't OK to say out loud anymore," the miniskirted Kimmy declares, trotting off to make her fiancé a drink. Charretier gives a beautiful, zingy energy to Kimmy's movements. She's the ultimate fembot — a paragon of compliance. (Nanna, though, isn't drawn with the zest she deserves.)

Fortunately, there are numerous women like Nanna in these stories. As in real life, their rebellions range from subtle to dramatic. Maya, the protagonist of Jordan Clark and Naomi Franquiz' "What's Love Got To Do With It?" rejects suitors even as her family is threatened with an "old maid tax." She finally gets a tax credit by serving as a surrogate mother to a male child. Franquiz gives Maya a strong, hearty body, so of course a man on her dating app tells her, "You could be a model if you lost some weight."

There's a lot of heart in this volume, so it's unfortunate that it fails, overall, to live up to DeConnick and De Landro's original tales.

On the other hand, the heroine of Vita Ayala and Rossi Gifford's "To Be Free ..." is almost lighter than air. A ballet dancer, she's recruited to steal crucial information from the heavily-guarded Archive of Corruptive Materials. As she spins, vaults and tiptoes toward her goal, Gifford scatters panels here and there across the pages to create a sense of breathless, teetering suspension. When Ayala finally reveals the contraband information, it's the perfect kicker.

There's a lot of heart in this volume, so it's unfortunate that it fails, overall, to live up to DeConnick and De Landro's original tales. There may be plenty of feminist anger here, but the stories are all fairly straightforward: They identify misogynist trends in contemporary society and take them to extremes. The original series is much more anarchic; sometimes it's not even clear what point DeConnick's trying to make, with uniquely subversive results. Most of these stories also lack the grittiness De Landro brought to the artwork. One exception — literally — is the gorgeous, black-and-white "Love, Honor and Obey" by Kit Cox, in which Vanesa R. Del Rey layers in a speckled texture to roughen up her precise linework. Other stories, like "This Is Good For You" by Danielle Henderson, Ro Stein, Ted Brandt and Clayton Cowles, embrace an antiseptic look to sinister effect.

One totally awesome part of this book is the inclusion of photos of real women cosplaying as prison planet inmates. Glowering in their "NC"-emblazoned overalls and combat boots, these women underscore the fact that this world, however far-fetched it may seem, isn't simply a fantasy. It might be — perhaps always is — right around the corner.