Accessibility links
Why We Kiss Under Mistletoe And Toast With Eggnog The holiday season is full of traditions, but where did those come from? This year the staff of All Things Considered tracked down experts to find out.

Why We Kiss Under Mistletoe And Toast With Eggnog

Why We Kiss Under Mistletoe And Toast With Eggnog

Whether it's hanging lights, baking dozens of cookie variations or just enjoying the plants, holidays are full of traditions. But like with any tradition, sometimes you've been doing it so long that you don't know why.

Why do we kiss under mistletoe and toast with eggnog? Who decided we should eat jelly doughnuts for Hanukkah? And where do poinsettias come from?

These are a few of many questions, but with expert help, All Things Considered found some much-needed answers to share. Who knows, you might find some fun facts of holiday fodder for that party you're headed to. 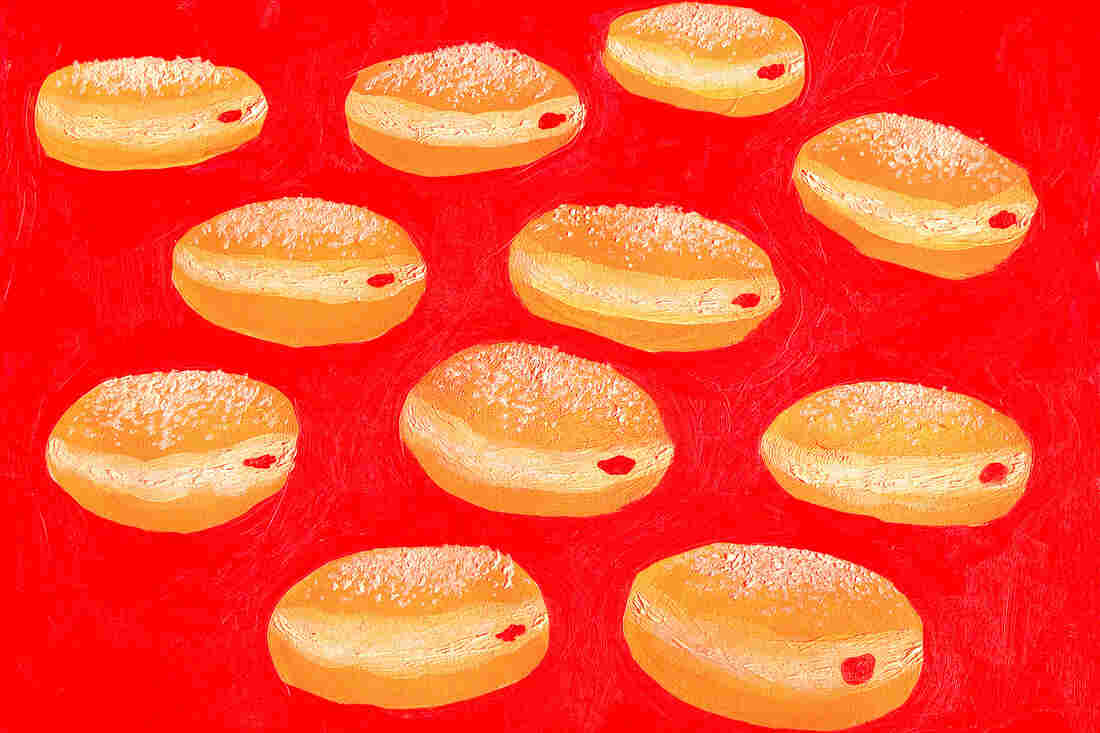 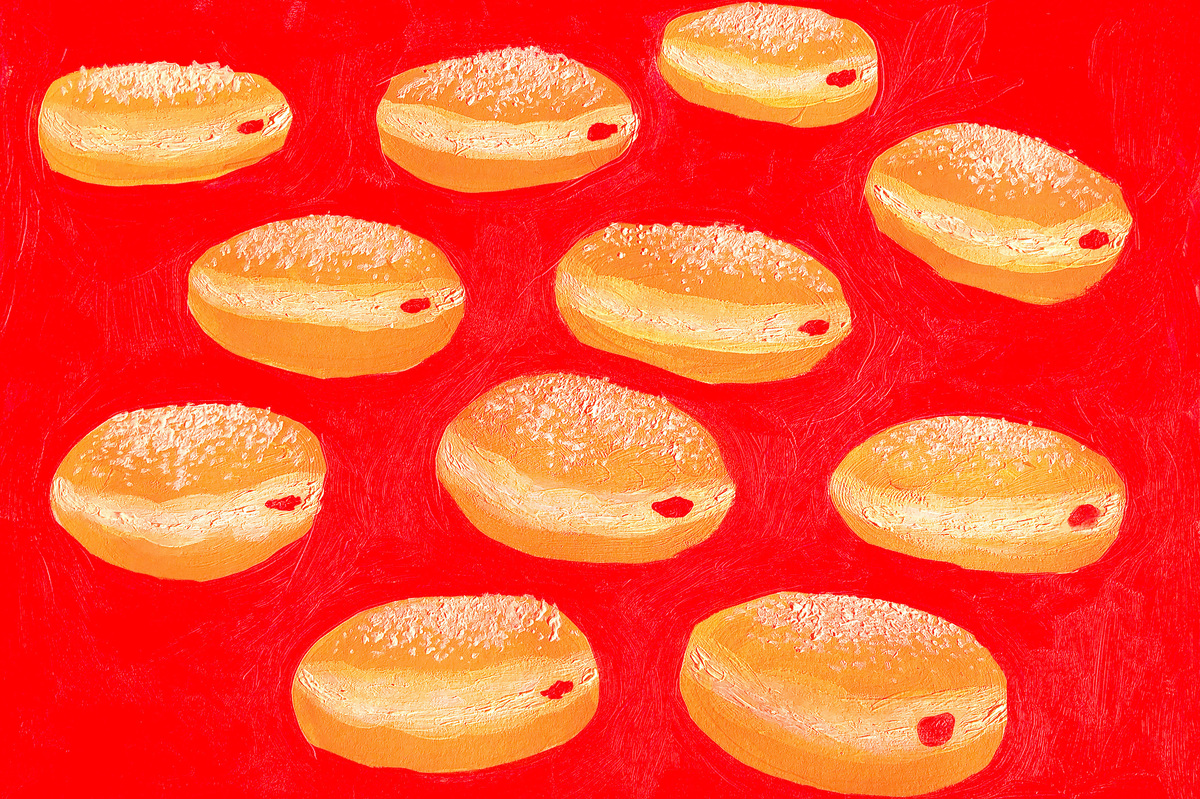 Going around at a Hanukkah party, All Things Considered producer Sam Gringlas asked a number of people if they knew why jelly doughnuts were eaten during the holiday. No one really knew, but 10-year-old Nathan Szubin got close by saying, "It's because just like latkes, they're deep fried in oil to remind us how the miracle that the oil lasted eight days instead of one."

How The Israeli Sufganiyah, Or Jelly Doughnut, Got Its Start As A Hanukkah Treat

Doughnut-like treats have a long history, both in the Old World and the New World. Food historian Emelyn Rude says the sort we're familiar with emerged in 16th century Europe, when sugar got cheap and Europe experienced a "pastry revolution." The jelly-filled doughnut, now known as sufganiyah, can be traced Germany and neighboring countries during that era.

Joan Nathan, who is the author of 11 cookbooks, her latest being King Solomon's Table: A Culinary Exploration of Jewish Cooking from Around the World, says that the Israeli sufganiyah got its start as a holiday treat with the help of Eliezer Ben-Yehuda, who was working after the founding of Israel on the revival of Hebrew as a modern language.

"He insisted that the whole family run around stores and order food in Hebrew and they created a new dish that would celebrate Hanukkah," Nathan says.

Sufganiyah became what Nathan says was the first true Israeli food. While at the start, strawberry and raspberry were traditional flavors, today there is no limit.

"In Israel, they have every kind of filling," she says. "They have sufganiyah with foie gras, they have it with jalapenos — for all kinds of tastes and in a way it's a little bit like becoming a bagel."

But they're only available for one week during Hanukkah.

In the United States, the filled and fried treats are becoming bigger, with main retailers like Dunkin' Donuts selling them and at times catering to synagogues.

A toast to eggnog

All of the experts and eggnog enthusiasts that NPR producer Thomas Lu talked to agreed on one thing: What's in the cartons at grocery stores is not eggnog — not even close. 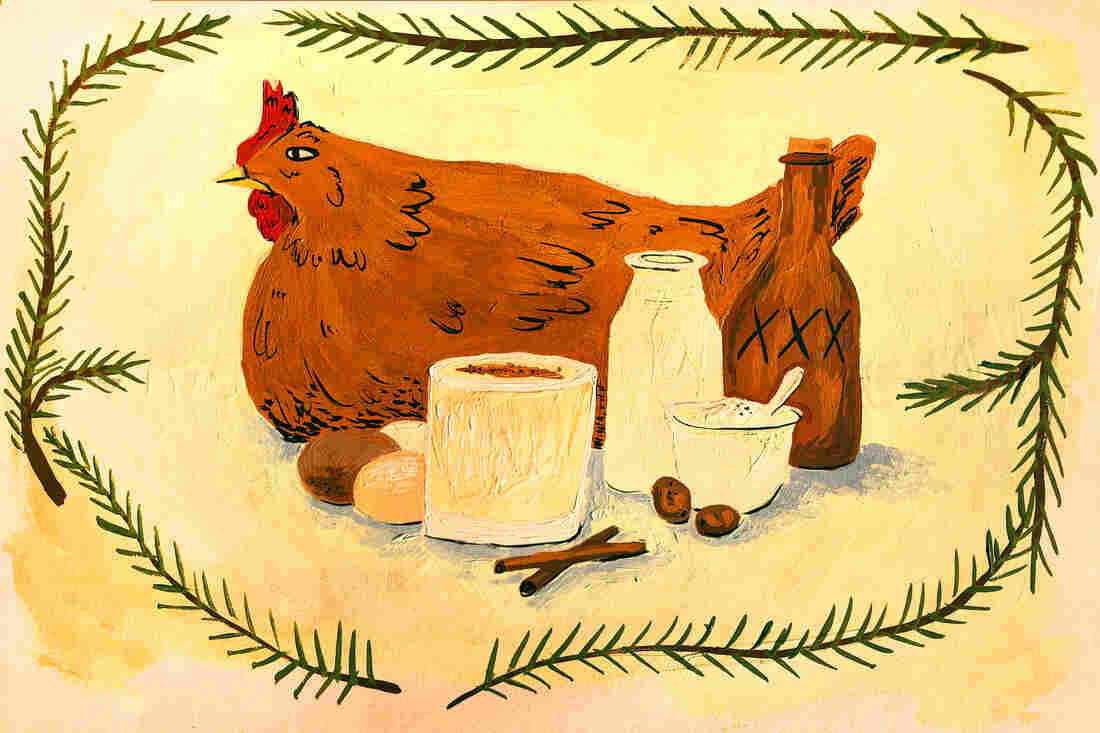 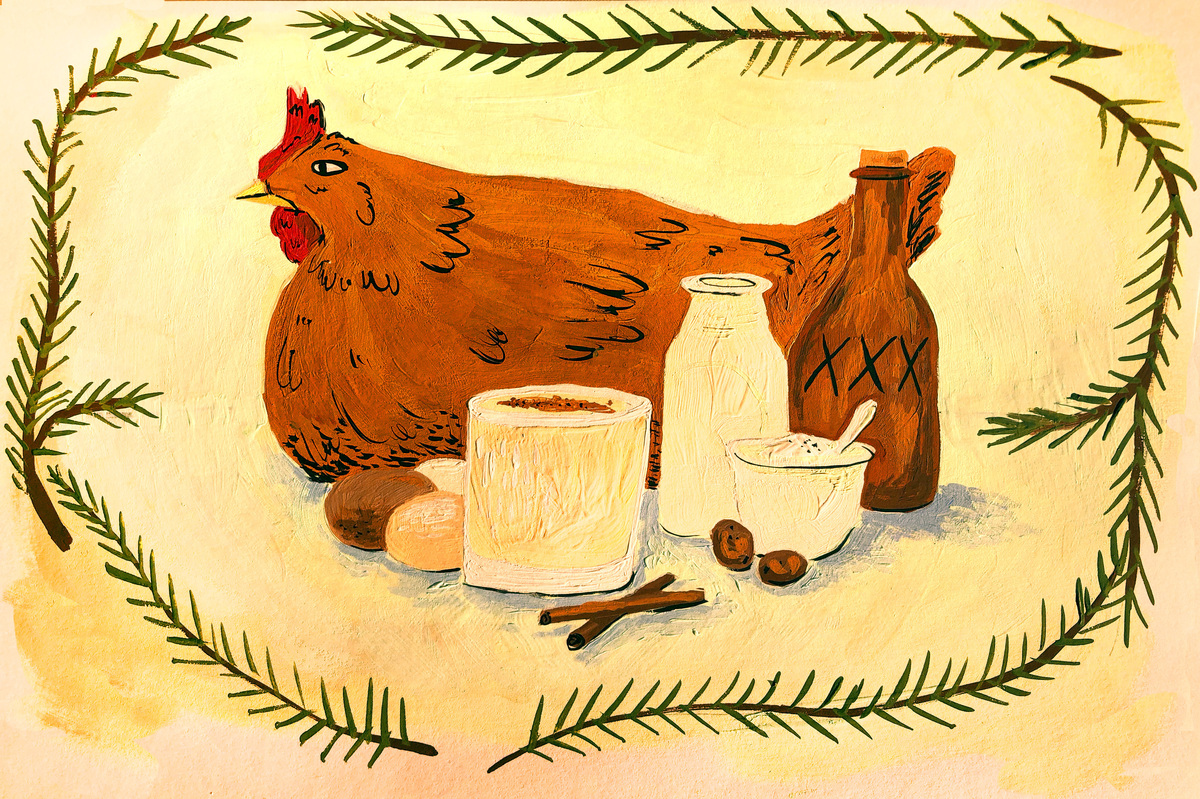 Food show presenter and author Alton Brown considers himself a passionate imbiber and maker of eggnog. Brown says that the drink we have today can be traced back to England, where wealthier families had the spices necessary for the recipe.

"The beverage that we know of as eggnog actually has its roots in a drink that goes back at least to 13th century England called posset, which was essentially a spiced warm ale that had eggs mixed into it, both the egg yolks and the whites," says Brown.

Why Is Egg The Only Nog?

He says the addition of dairy became a more consistent ingredient in the U.S. during the colonial period when cows were more common.

The eggnog of today still has dairy, but the beer and ale are gone and replaced with liquors and spirits. And while a lot of people say they don't like eggnog, Elizabeth Lonsdorf says that's because they probably haven't had the right drink.

Eggnog during the holiday season has been a family tradition for as long as Lonsdorf can remember. She watched her parents make it and says her mom remembers her grandmother making it. The family takes eggnog so seriously that the recipe is kept in a safe deposit box.

About This Series: The 12 Days Of Quirky Christmas Foods Around The Globe

Every winter Lonsdorf and her husband start preparing for their holiday party a few weeks ahead. They put a lot of work into the food, and then about three days before, they get the eggnog ready to go.

She says she can't reveal the entire recipe, but it generally has "a lot of eggs, raw eggs that are separated and incorporated into different parts of it. There is a lot of alcohol, three different kinds of alcohol, and probably three times as much alcohol as there is milk or whipped cream."

Making it three days in advance gives the eggnog time to steep and develop in what Lonsdorf says is "perfectness." She also notes that all the liquors are incorporated slowly and combined using a hand mixer.

Both Brown and Lonsdorf say most people shouldn't worry about getting sick from drinking eggnog as long as the proportion of alcohol to egg is high enough.

Not everyone celebrates Christmas, so when almost everything shuts down it can present a bit of a problem. Though as All Things Considered host Robert Siegel says, "Chinese food on Christmas has become as American-Jewish as apple pie." 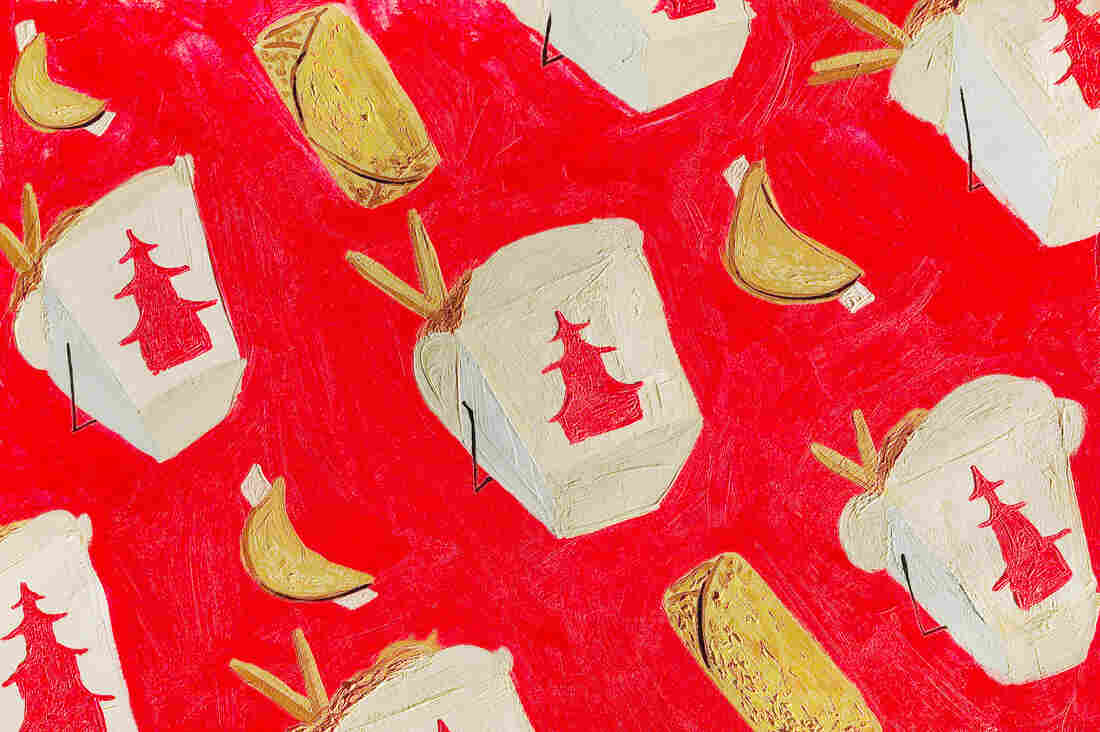 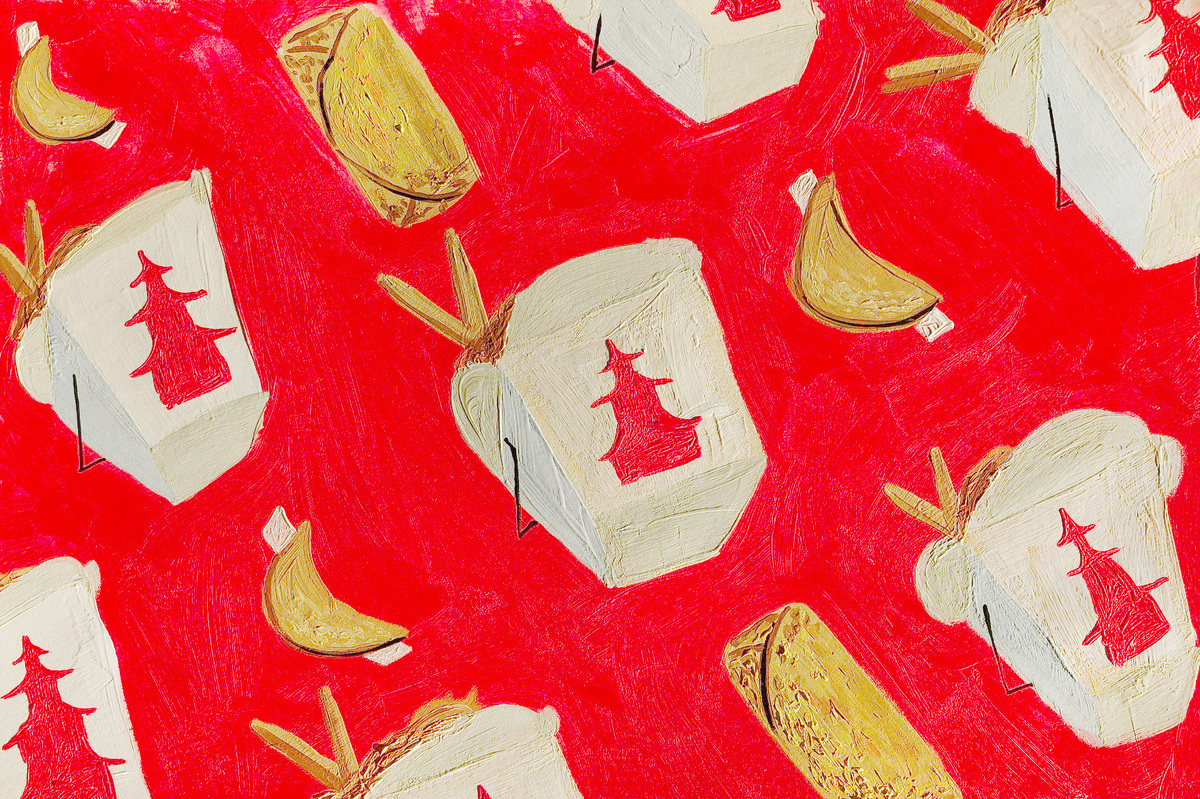 To get a better idea of why Jewish people traditionally eat Chinese food on Christmas, Siegel talked with Rabbi Joshua Plaut, author of A Kosher Christmas: 'Tis the Season to Be Jewish.

Plaut says the tradition of Jewish people eating Chinese food on Christmas goes back to 1935.

Why Do Jewish People Eat Chinese Food On Christmas?

That year the American Jewish Journal published a piece criticizing Jews for eating at non-kosher restaurants, particularly singling out those who went to Chinese restaurants.

Eating non-kosher items at Chinese restaurants does happen, and has its own phrase: "safe treyf." Treyf is the Hebrew word for non-kosher food.

Beyond Latkes: 8 Nights Of Fried Delights From Around The World

"Jews in Chinese restaurants are eating all sorts of non-kosher food items such as shellfish, pork products — which are hidden in a wonton or some type of egg roll. And so you're able to partake in this wonderful delicacy without actually knowingly eating this non-kosher food item," Plaut says. "This is a place where you can engage in eating this food from an exotic culture that seemingly is OK and kosher, but really is not and still have a smile and delight in it without feeling guilty."

The Chinese food tradition continued and by 1950 comedians made references to it in their skits. Plaut says it was more than convenience — it offered Jewish people a place to celebrate together.

"Honestly, the Chinese restaurant was a safe haven for American Jews who felt like outsiders on Christmas Eve and Christmas Day," he says. "You go to a Chinese restaurant, you become an insider. You can celebrate somebody else's [holiday] and yet be amongst friends and family and members of the tribe — thereby the outsider on Christmas becomes the insider."

Meeting under the mistletoe

What's so romantic about a parasite? Yep, that's right. The oh-so-romantic mistletoe is actually a life-sucking freeloader. 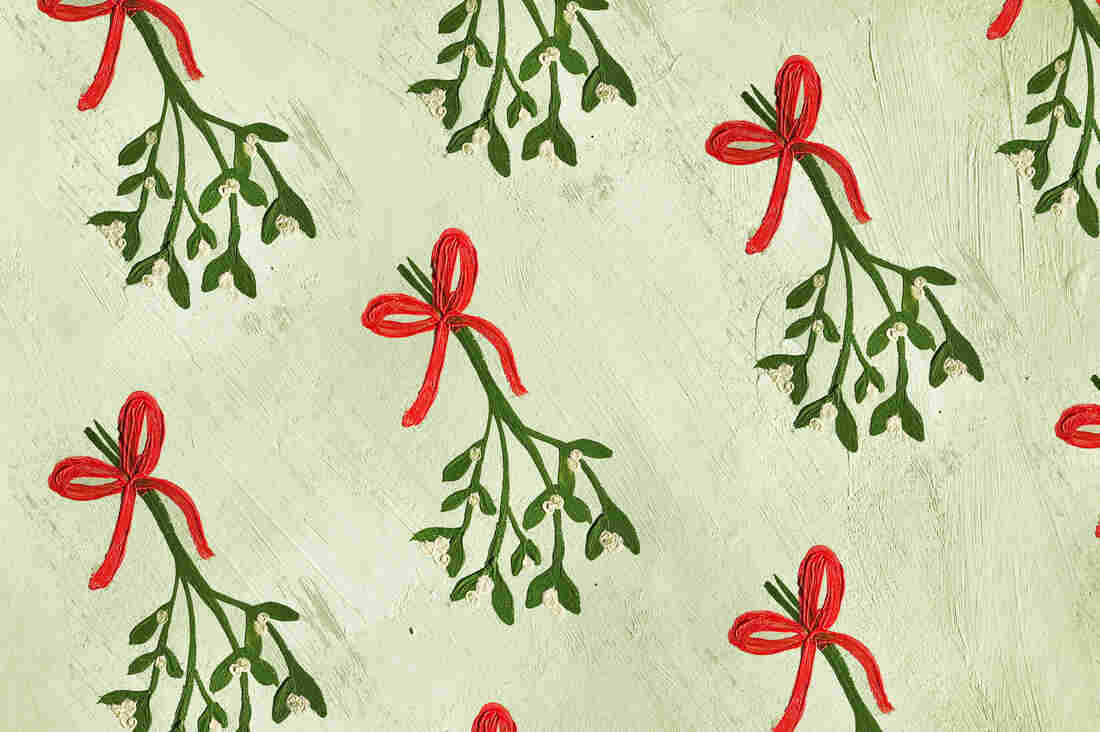 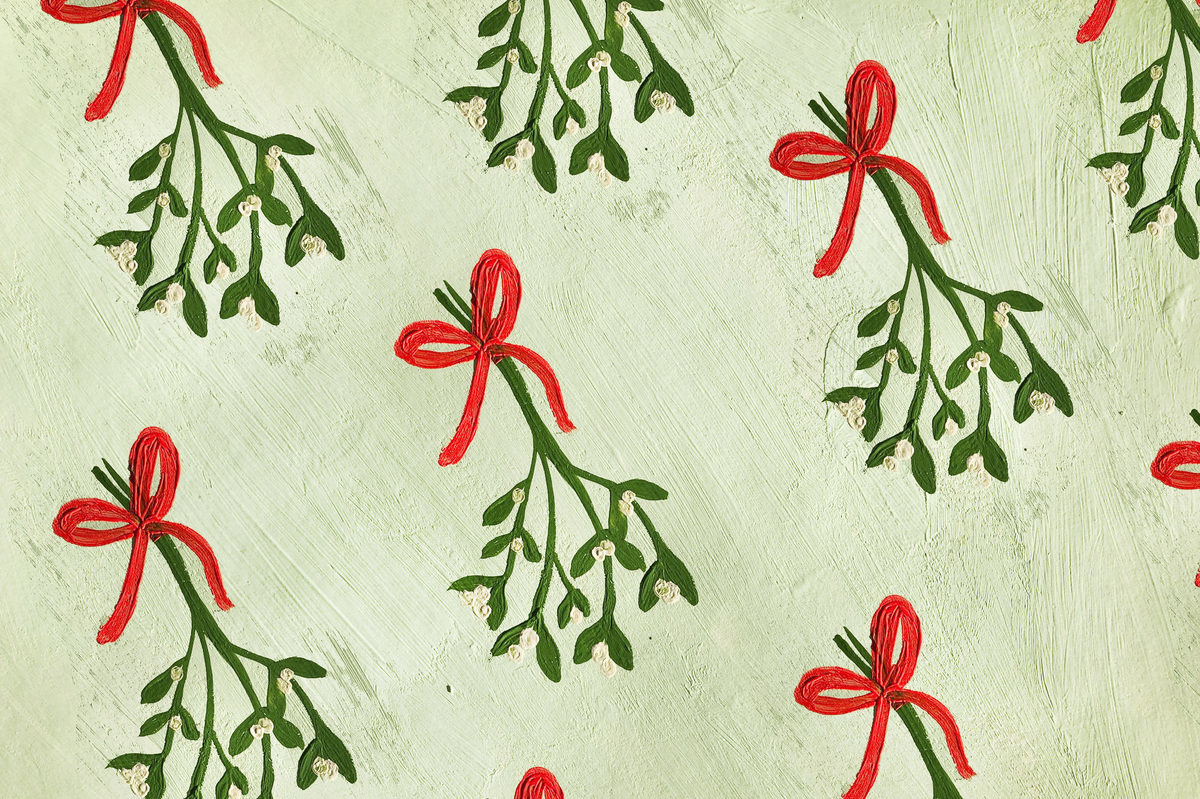 NPR's Thomas Lu spoke with Becky Little, a freelance writer in the Washington, D.C., area, about how something so small became so relevant during the holidays.

Little says for the past several centuries people have found mistletoe to be an interesting plant. In the first century A.D., Celtic druids mixed mistletoe into a drink to give to animals because they thought it would help with the animals' fertility, she says. It's also this group that is credited with hanging the plant above their doorways.

"[It's] something that is maybe special, has signs of vitality, fertility," Little says. "Because it's a parasite, it sucks the nutrients from trees. And people in European countries have noticed this over the centuries because it's one of the only things that stays green during winter."

Why Do We Kiss Under The Mistletoe? Listen· 2:49

It's that fact that is fundamental to understanding why mistletoe has had such importance throughout the years, Little says.

But what gives mistletoe its romantic edge?

For that answer, Little says one has to look at Norse mythology. In the story, Balder, a son of Odin (yes, the same Odin that is father to Thor for all you Marvel fans), dies after being pierced by a mistletoe arrow. In some versions, Little says that that's the end of the story. But in others, Balder's mother Frigg weeps when her son dies and her tears turn into mistletoe berries that bring her son back from death. After this miracle, Frigg declares the plant a symbol of love.

While there are a lot of hints in mistletoe's story, Little says, nothing about the origin of kissing underneath is completely certain.

"We don't have one answer for why people began to kiss under mistletoe. Really, the first recordings we have of people doing this are in the 18th century," she says. "The origin of traditions is hard to trace and it does seem like there was some evolution from it being a special, maybe romantic plant that you would hang up sometimes around the winter solstice to something that you would hang up around the winter solstice again, but this time you call it Christmas, and kiss under."

Traditions are ever-changing and Little says she thinks mistletoe could be on its way out — because, for as much as it's mentioned in songs and movies, she doesn't think many people hang it up during their holiday parties.

This might be a good thing though, because unlike poinsettias, mistletoe is poisonous and should not be ingested.

A previous version of this story said that NPR producer Justine Kenin talked with Rabbi Joshua Plaut. It should have said Robert Siegel spoke with the rabbi.