Accessibility links
Amtrak Derailment Highlights Delays In Implementing New Safety Measures Positive train control technology was installed but not activated on the track where a deadly derailment occurred on Monday. The technology was still being tested and set to be turned on next year. 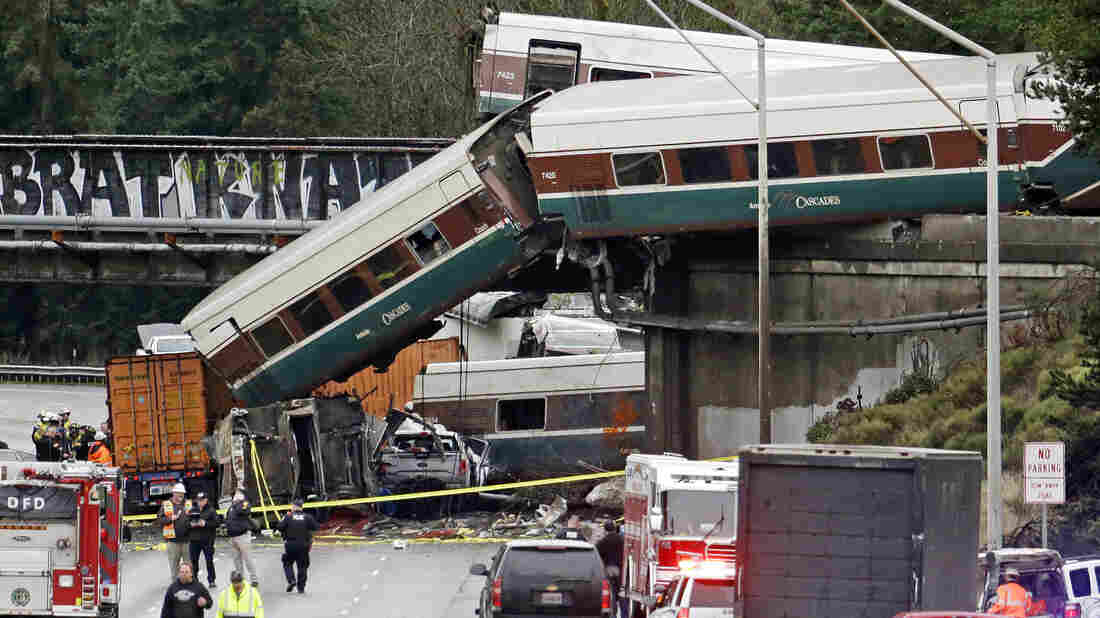 Cars from an Amtrak train lay spilled onto Interstate 5 below and alongside smashed vehicles as some train cars remain on the tracks above on Dec. 18, 2017, in DuPont, Wash. The Amtrak train making the first-ever run along a faster new route hurtled off the overpass Monday near Tacoma. Elaine Thompson/AP hide caption 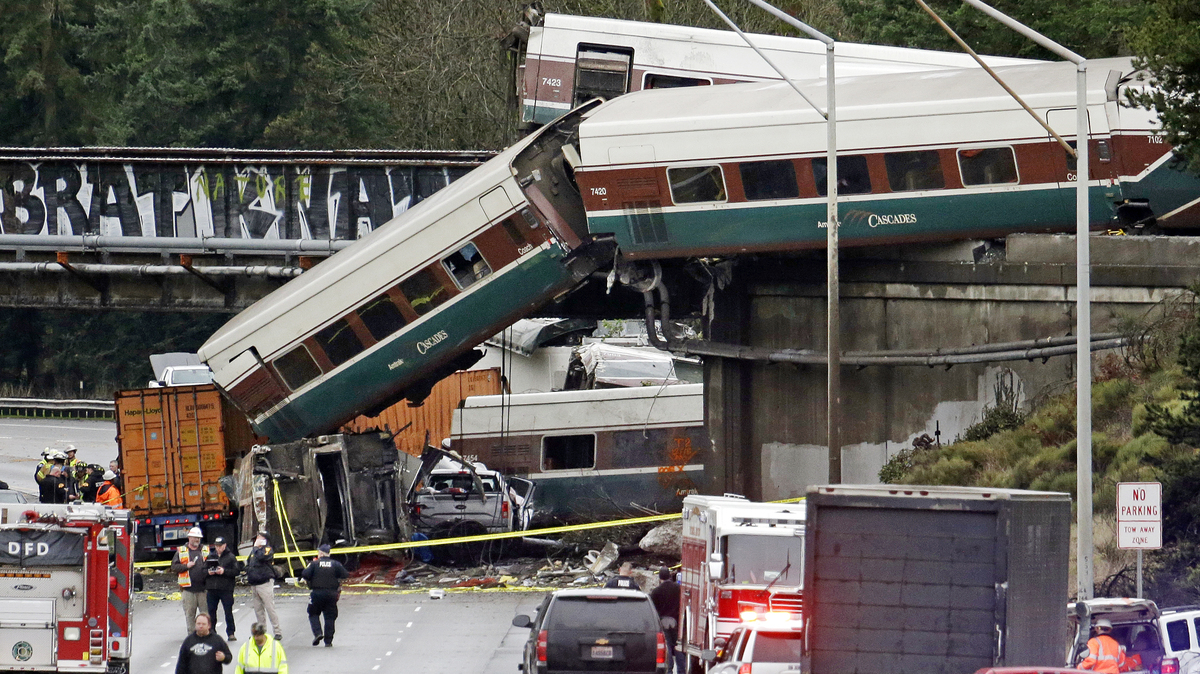 Cars from an Amtrak train lay spilled onto Interstate 5 below and alongside smashed vehicles as some train cars remain on the tracks above on Dec. 18, 2017, in DuPont, Wash. The Amtrak train making the first-ever run along a faster new route hurtled off the overpass Monday near Tacoma.

The Amtrak passenger train that derailed on Monday south of Tacoma, Wash., was traveling on tracks that were equipped with technology to prevent accidents, but the safety feature was not activated, according to the rail service.

The incident killed three people and injured nearly 100 others and has renewed concerns about the safety of U.S. rail lines. The National Transportation Safety Board says the train was travelling at 80 mph on a curve with a posted speed limit of 30 mph. Positive train control technology was installed on the tracks, but was still in the testing phase and not set to be functional until next year, says Jim Blaze, a railroad consultant and economist.

Positive train control automatically slows down or stops a train using GPS, trackside signals and onboard computers. It reduces the risk of human error if an engineer goes over the speed limit or is distracted.

A federal mandate ordered all major railroads to install positive train control after a head-on collision between a passenger and freight trains in Los Angeles in 2008. Railroads were required to complete upgrades by December 2015, but Blaze tells Here & Now's Robin Young the deadline was extended until at least 2020 for some railroad segments.

"Our parents won World War II in four years. Why is this taking more than a decade to implement this technology?" he asks.

Experts say implementing positive train control is complicated. It requires extensive technological coordination between passenger and freight trains, and the placement of millions of switches and signals.

"Essentially, we're developing a new safety system from scratch that needs to seamlessly serve a massive transportation system," railroad expert Jeff Young wrote on the Association of American Railroads website. "It's like creating an entirely new air traffic control system, and it needs to be meticulously choreographed to ensure that it's going to work safely. It's not going to work perfectly right out of the box, so careful testing of the entire system is essential for making it safe."

"They didn't use the full economic costs of these accidents when they made the calculations for cost benefits," he says. "They used marginal lower costs. So for the first three to four years of trying after the accident in California, which led to the federal legislation mandating PTC, the railroads resisted. They lost that time, and they've never caught it."

After the 2008 crash in Los Angeles, which killed 25 people, an Amtrak train derailed in Philadelphia in 2015, killing at least seven people and injuring more than 200 passengers. The NTSB blamed the derailment on a distracted engineer, and the segment of track where the accident occurred did not have positive train control.

The Federal Railroad Administration reported in March that freight railroads had installed positive train control on 16 percent of track at the end of 2016. During the same period, installation of the technology only rose from 23 to 24 percent on passenger lines.

While there has been little progress toward meeting the federal mandate, freight railroads have spent $8 billion and passenger railroads $3.5 billion on the project as of March 2017, the Association of American Railroads estimated.

In response to Monday's derailment in Washington state, President Trump suggested on Twitter that crumbling infrastructure was to blame. But Blaze affirms those tracks were brand new.

"I'm not sure that President Trump's advisers informed him correctly that this was an all-new construction," he says, "and that the positive train control mechanisms were basically in place but not turned on."