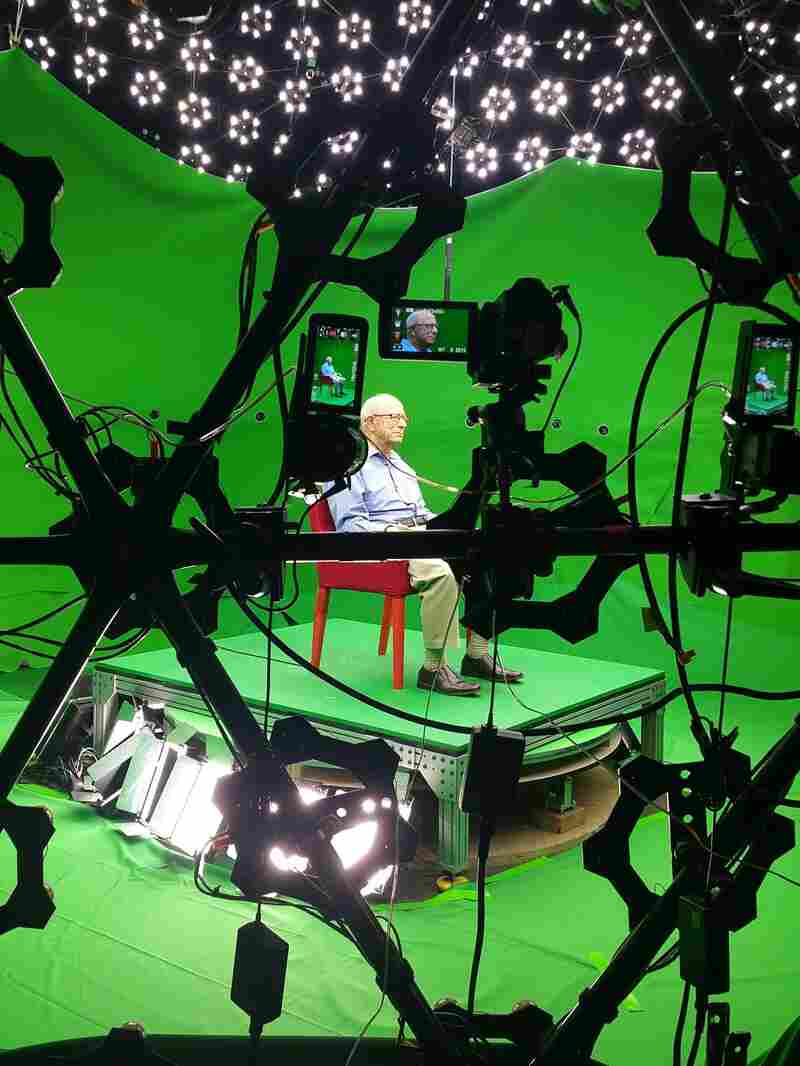 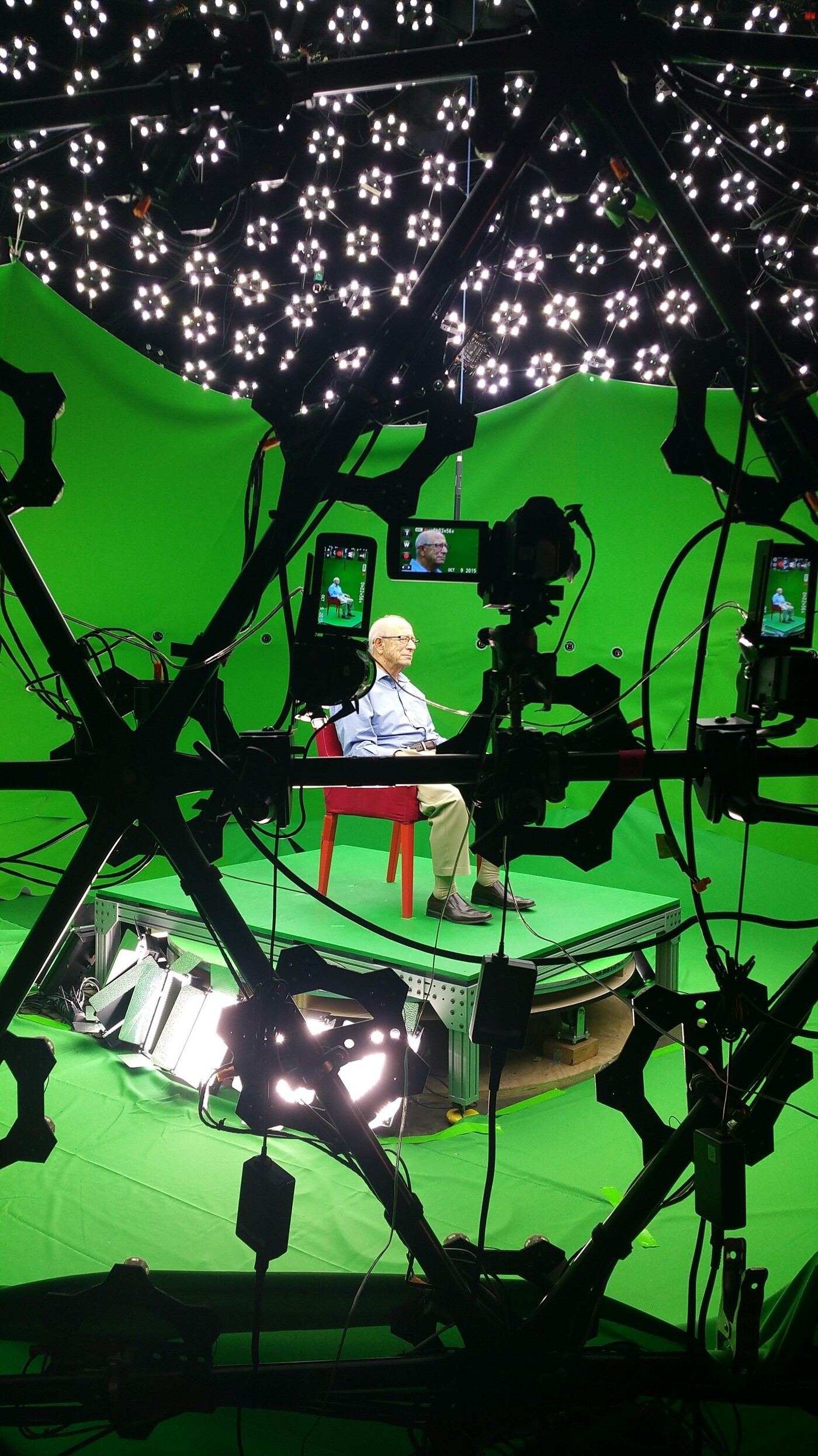 Sam Harris, surrounded by green screens, in preparation for his hologram.

Holocaust survivor Sam Harris has told the story of how he survived the Holocaust hundreds of times.

He's talked about his experience in the Nazis' concentration camps with school groups and in videos for oral history archives. He even wrote a children's book.

But when he sat down to tell his story in Los Angeles a couple months ago, it was different.

In a Hollywood studio, surrounded by green screens, Harris answered questions for five or six hours a day. By the time it was all done, he'd answered nearly 2,000.

Sam Harris was getting made into a hologram.

For decades, hearing firsthand accounts from survivors has been an integral part of learning about the Holocaust.

Every year, fewer survivors are alive to tell their stories, so the Illinois Holocaust Museum and Education Center is turning to holograms. It's part of their new exhibit called "Take a Stand."

"Nothing replaces the testimony of a survivor who is in front of an audience. It really creates this empathy that we don't see any other way," says Shoshanna Buchholz-Miller, the museum's vice president of education and exhibitions. "And we are so blessed that we have that opportunity now, but we're not going to have that opportunity forever." 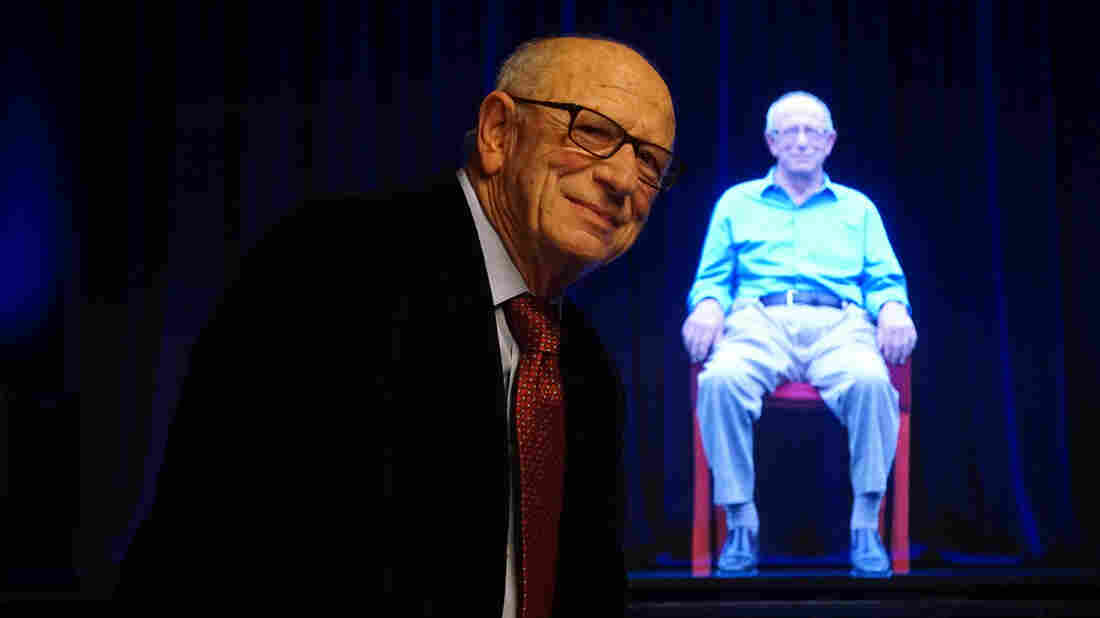 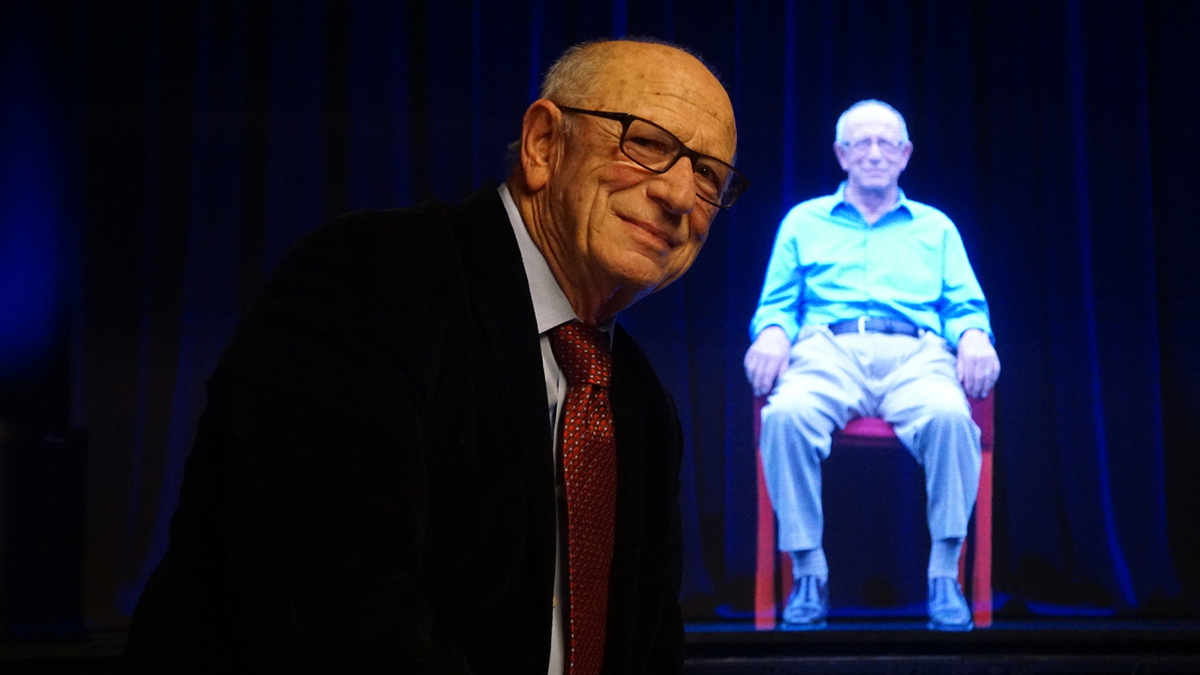 The Illinois Holocaust Museum and Education Center is using holograms to help visitors learn about the experiences of people during the Holocaust.

Harris is one of 13 Holocaust survivors who will live on as holograms at the museum. Their stories reflect a range of experiences during the Holocaust — Harris was just 4 years old when the Nazis invaded Poland and rode out the war hiding in two concentration camps, Deblin and Czestochowa. His parents were killed, leaving him orphaned when the war ended in 1945. When he arrived in the United States, he was 12 years old.

'You do it for a purpose'

When visitors enter the exhibit space, Harris appears on a stage in a room set up like a theater. He sits in a red chair, wearing a blue shirt and khakis. Visitors are free to ask him whatever they want.

What was your first memory of arriving at Deblin?

Who in your family survived?

"When I sit on that stage and the real life comes out and you see me as a person, you cannot deny that what I am saying is the truth," he says.

For Harris, that made the hours he spent answering questions in Hollywood worth it — even though the process was often incredibly difficult.

"To answer a question, I always put myself in the position to where the answer was — like watching somebody being hanged," he says. "I'm really there watching it and I see it and I describe it. It's painful, and you begin to resent it. But what saves you is you do it for a purpose. You do it so 50 years from now, 100 years from now, people can look you in the face, ask you a question, and by god I give the answer."

We should also note that the technology used in this exhibit, called New Dimensions in Testimony, was developed by the USC Shoah Foundation.

The Illinois Holocaust Museum and Education Center is the first to permanently exhibit these survivor testimonies.