Accessibility links
Trump's EPA Could Open Door For Alaska Gold And Copper Mine Alaska Native tribes who claim fishing as a human right have opposed potential gold and copper exploration in Alaska's Bristol Bay area, and are bracing for Pebble Mine to apply for permits. 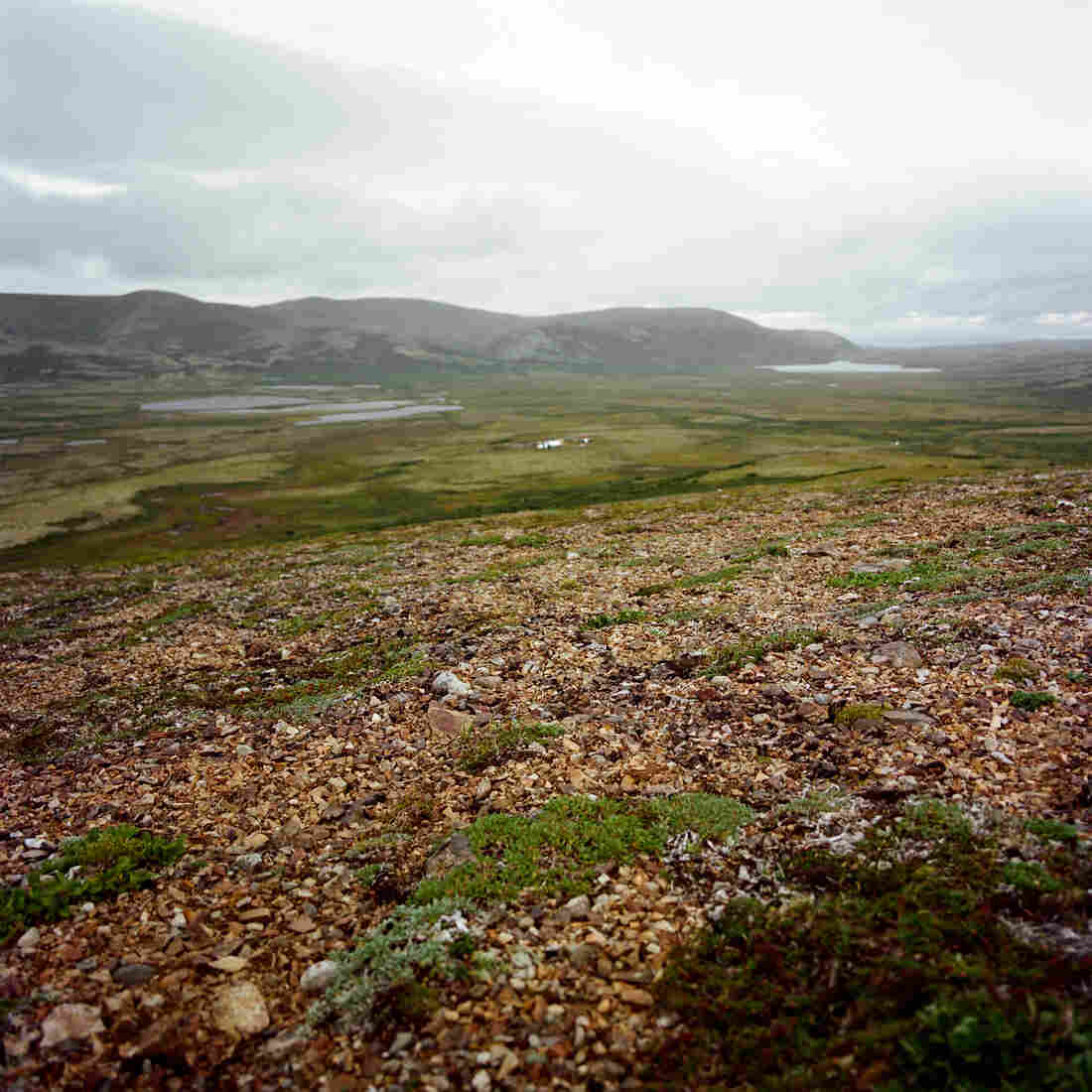 If President Trump's EPA rolls back the decision, it could make Pebble Mine a reality in the Bristol Bay region, where one of the world's most important sockeye salmon fisheries is based. Brian Adams for NPR hide caption 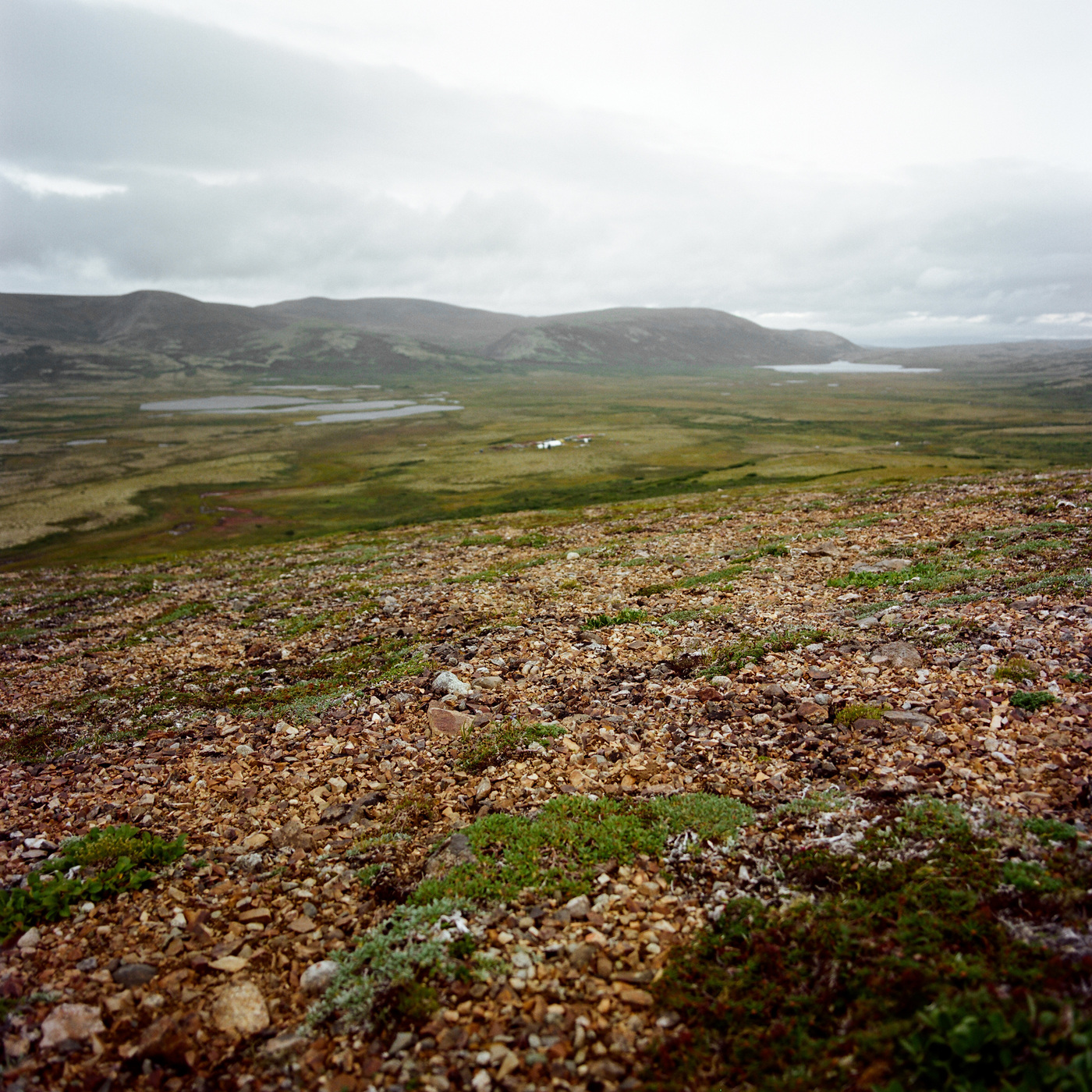 If President Trump's EPA rolls back the decision, it could make Pebble Mine a reality in the Bristol Bay region, where one of the world's most important sockeye salmon fisheries is based.

A proposed gold and copper mine in Southwest Alaska is one step closer to becoming a reality this week: On Monday the company behind Pebble Mine announced a new investor.

Meanwhile, the Trump administration may reverse an Obama-era EPA decision that the mine in the Bristol Bay region would be too risky to go forward. If President Donald Trump's EPA rolls back the decision, it could help usher in a mine where one of the world's most important sockeye salmon fisheries is based.

Bristol Bay is also the ancestral home to Alaska Native peoples, who are grappling with changes that the mine could bring to their communities if it is built.

The Pebble Mine site is a rolling, windblown landscape of lichen-covered tundra interrupted only by lakes and streams feeding into larger rivers flowing south to Bristol Bay. Clinton Hobson has a job at the site, plugging exploration drill holes that are leaking water.

"It's hard work, but hey, it's a job," says Hobson, who is an Athabaskan Alaska Native. He's originally from the village of Newhalen and now lives in the tiny village of Kokhanok, on the shores of a lake near the mine site. Jobs are hard to come by there and he says he's happy to have the work—and would like it to continue. 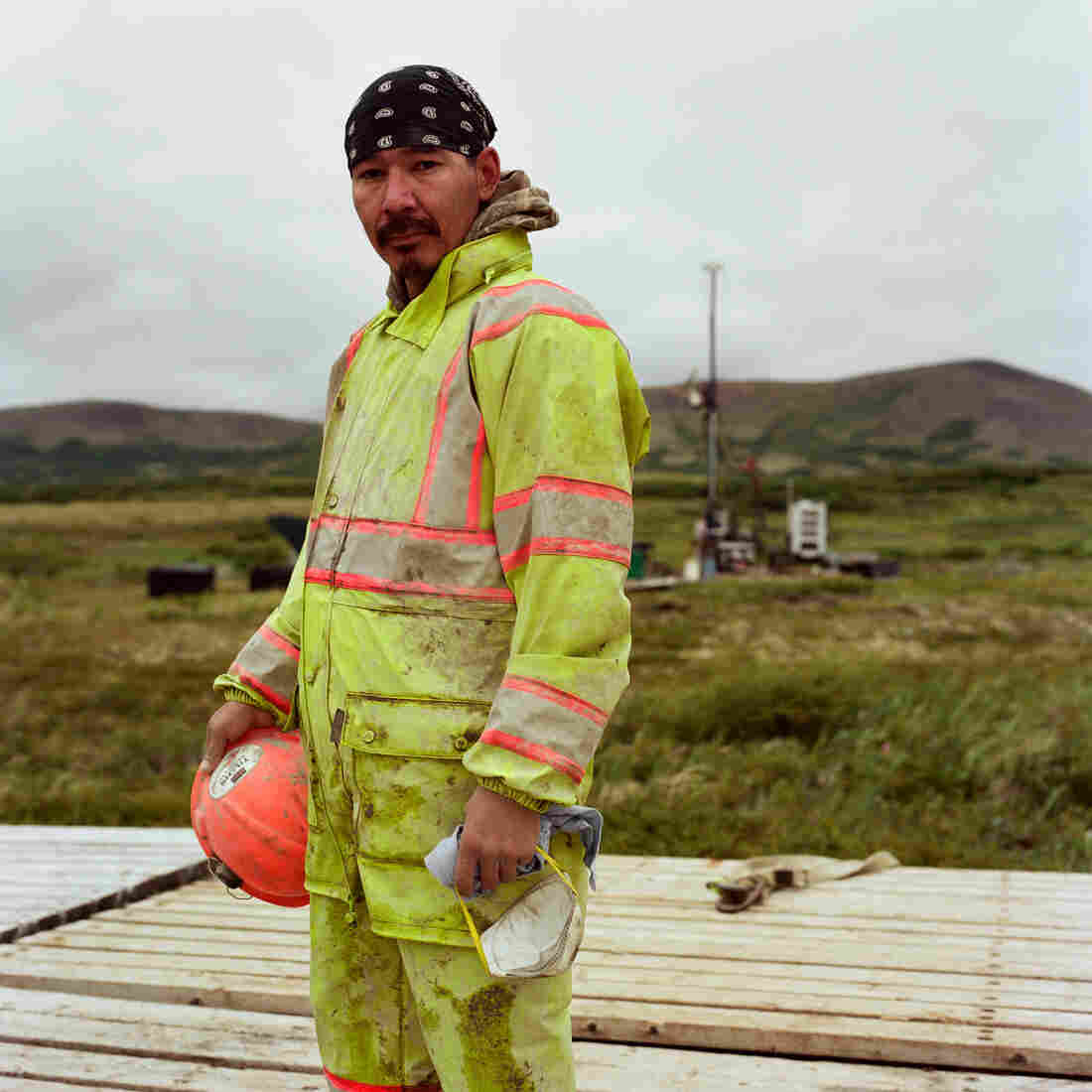 Originally from Nondalton, Alaska, Clinton Hobson, who lives in Kokhanok, worked as a drill helper at the Pebble Mine site during the summer of 2017. He says he makes $19.75 per hour. At home, he says, he cannot find a job that pays enough to support his family. Brian Adams for NPR hide caption

Gas, electricity and oil prices can be up to four times more than in the lower 48. Store-bought food is expensive, too, and hunting and fishing are key to food security.

Asked if he shares concerns about the development's possible impacts to fish with others in the area, Hobson says he has nothing to say.

"That's up to them," he says. "I'm just here trying to get some work done, trying to make some money for the family there, support them." He makes $19.75 an hour. The jobs offered by the mining project are seasonal and in a remote location, but they are attractive to Hobson and others in the economically depressed region with high unemployment.

Alannah Hurley, who lives about a hundred miles from the site, in Dillingham, says that having grown up in the small village of Clark's Point, she understands the need to work, but that building the mine is too risky for salmon.

"Bristol Bay is the last place on Earth that salmon thrive. We should care about that as a society," says Hurley. Hurley is Yup'ik. She's executive director of United Tribes of Bristol Bay, a group of tribes that came together specifically to fight the mine. 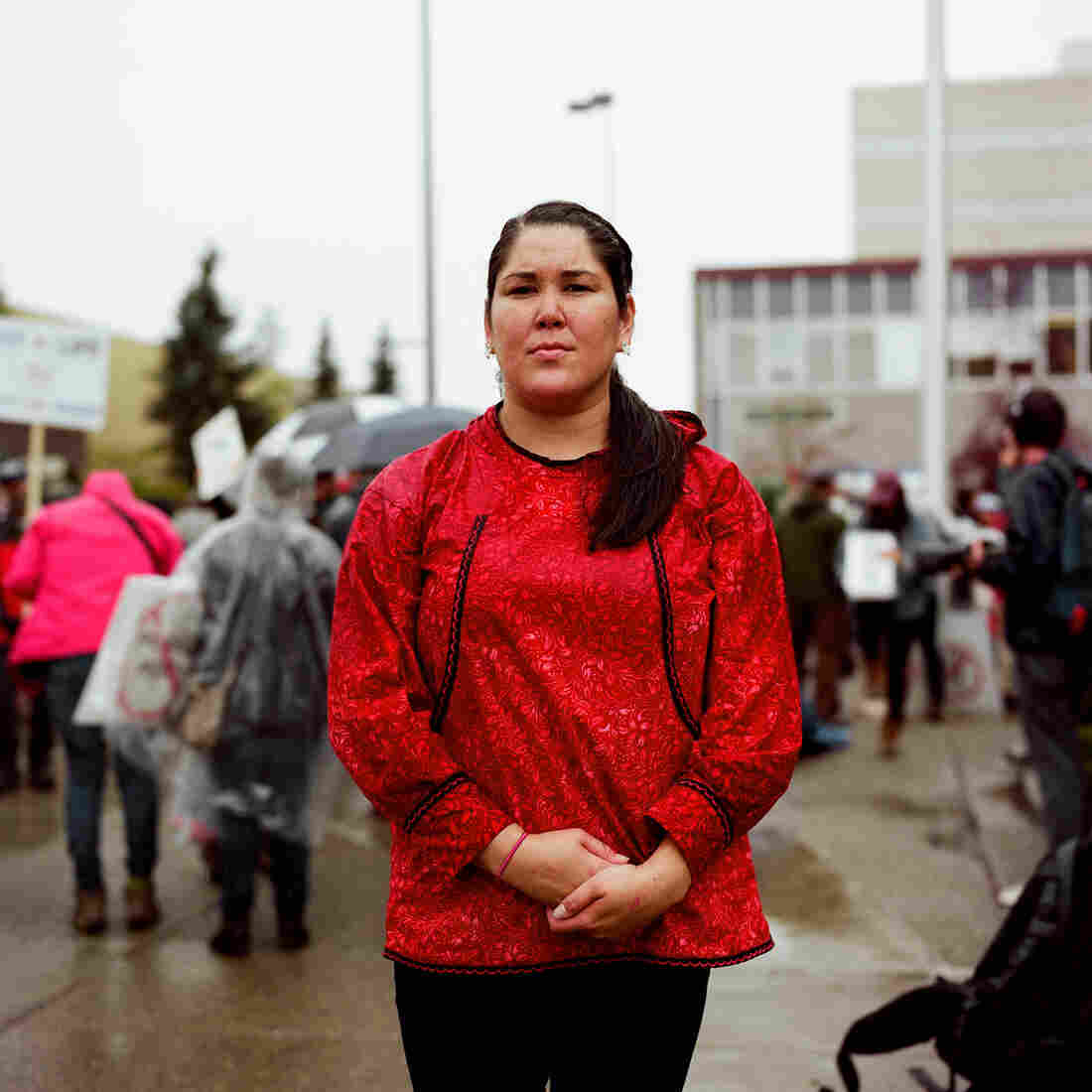 Dillingham, Alaska, resident, Alannah Hurley led a rally for opponents of the Pebble Mine project in downtown Anchorage on Aug. 21. Hurley is executive director for United Tribes of Bristol Bay, a group of tribes that came together specifically to fight the mine. She says UTBB represents about 80 percent of the Bristol Bay region's residents. Brian Adams for NPR hide caption

Indigenous people have fished for thousands of years in Bristol Bay, and the rivers and streams that flow into it. They still do. That's part of the reason the EPA, under President Barack Obama, used the Clean Water Act to propose limits on what the mine could do and how big it could be. Those proposed limits are what the EPA could now overturn, possibly making it easier for the mining company to apply for the permits it wants, and potentially opening the door for more mines. Trump's EPA Administrator Scott Pruitt met with the head of the Pebble Mine company in May. Pruitt has worked to give greater voice to the industries the EPA regulates. In Alaska mining could be the next to benefit.

Another reason to protect the area: money. Bristol Bay is home to one of the most commercially valuable fisheries in the world for sockeye salmon. Nearly half of the world's wild salmon return to spawn in tributaries that flow into Bristol Bay, and the area's commercial fishery is estimated to be worth $1.5 billion.

Under a new plan, Pebble Partnership CEO Tom Collier explains that the mine would have a smaller footprint. He says, in addition, that they would rule out the use of cyanide in a process to get the last bits of gold out.

"The community was adamant that they didn't want the risk of cyanide in Bristol Bay," says Collier, "so we're not going to do it."

Collier says the Pebble Partnership is taking the concerns of tribes seriously.

"I am, and I think Pebble is completely respectful of the culture and of the fish and of the water," says Collier. "Our difference of opinion is that I think we can build this mine without doing any damage whatsoever to those things, and I think that's what this permit process is about."

The EPA issued a statement to say it will consider all public input on the issue, including more than one million comments. Most of the comments support protecting Bristol Bay. Hurley says it doesn't surprise her because Bristol Bay is known around the world for its wild salmon. But she says that it's not just about fish as food. To Hurley and others, it's about a cultural right to do what their ancestors have done for thousands of years.

"This is a human rights issue at its core," says Hurley. "We can talk about the economics of the commercial fishery and the sport fishery all day. But when it comes down to it, this is an indigenous rights issue that all people should be concerned about."

The Pebble Partnership plans to file for permits by the end of the year.

Financial support for this reporting was provided by the Alaska Humanities Forum and KNBA public radio.