Accessibility links
A Painting Stored Away And The Artist Who Wants It To See The Light Of Day Critically-acclaimed when it was first shown, Simon Dinnerstein's painting The Fulbright Triptych has been in storage for 25 of its 41 years — and Dinnerstein is working to change that. 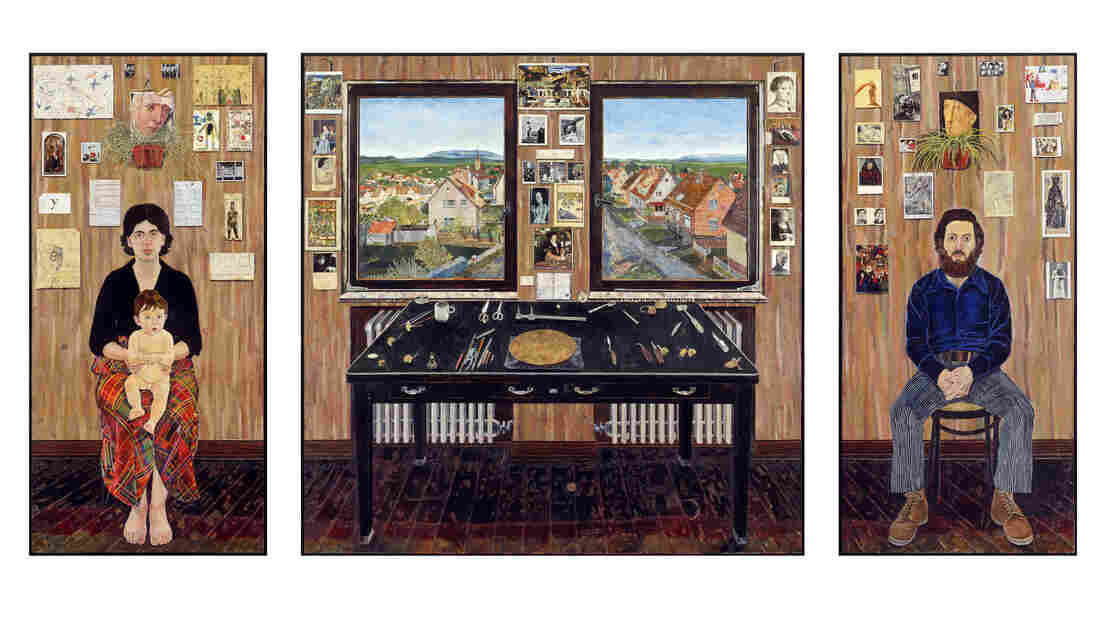 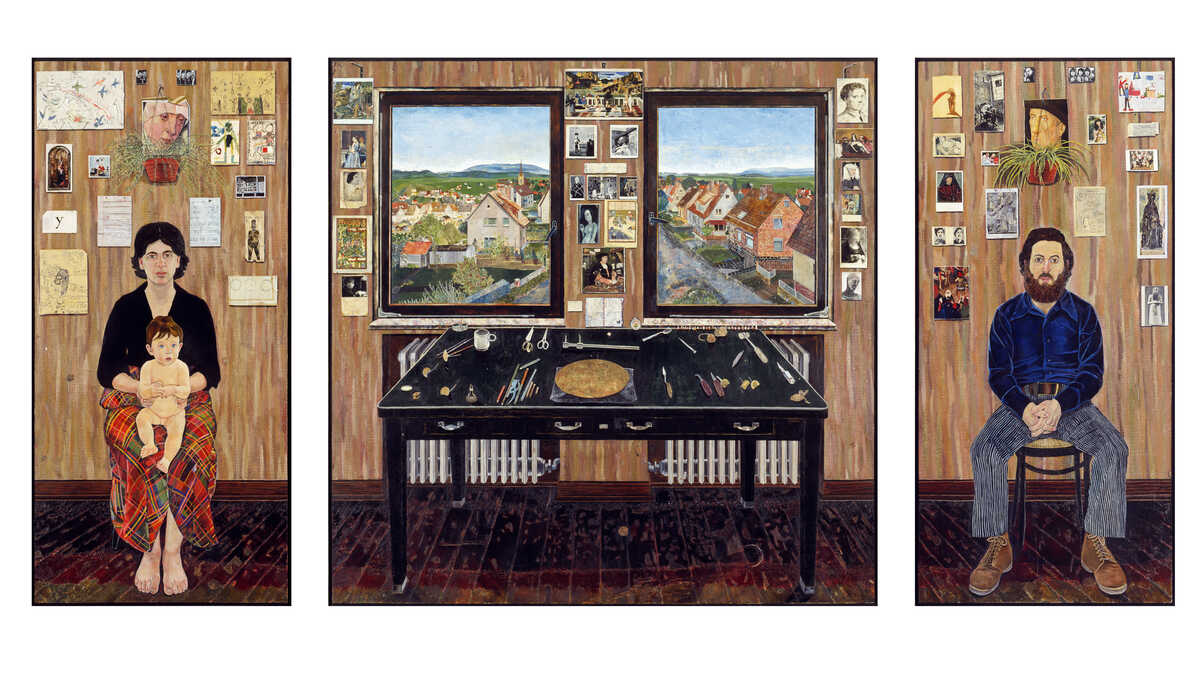 The Fulbright Triptych by Simon Dinnerstein.

American museum-goers can now get a rare glimpse of a painting that's been called a masterpiece — but has spent most of its life in storage. When The Fulbright Triptych was first shown in 1975, its future looked bright, but it didn't work out that way. It's a massive work — nearly 14 feet wide — with near life-sized portraits of the artist, Simon Dinnerstein, and his family.

It's the details that get you. In the right panel sits the artist, in the left, his wife holds their infant daughter, and in the middle is his work bench covered with engraving tools. On the walls behind are carefully reproduced paintings, postcards and photographs. And in between, two windows look out on a small town, all rendered in a hyper-realistic kind of folk-art style.

"There is a sense of 'What the heck is this?' and then you recover from that and you start falling into it," says Peter Trippi, editor of Fine Art Connoisseur Magazine. "You back up away from it because you need to give yourself some distance, and you think, 'This is slightly mad but also completely wonderful.'"

Dinnerstein began the triptych in Germany while on a Fulbright scholarship, hence the title. He finished it four years later in his Brooklyn studio. While it was still a work in progress, Dinnerstein says a prominent Manhattan gallery owner, the late George Staempfli, came to see it with an assistant.

"They looked at this painting for maybe a half-hour. Didn't say one word, no questions," Dinnerstein says. "I couldn't make out what was going on. At the end of the half-hour, George Staempfli said to me, 'I think this is a great painting, and I'd like to own it.'"

Staempfli sent Dinnerstein a monthly stipend for two years as payment. When The Fulbright Triptych debuted at the Staempfli Gallery in 1975, The New York Times raved about it.

"I went up in the elevator and people had The New York Times, and they were reading the paper, and they were talking about my painting. And when I got into the gallery, I met the former director of The Whitney Museum and the then-director of The Guggenheim Museum," Dinnerstein says. "And it was kind of like a fairy tale."

Seven years later, in 1982, Staempfli sold the painting to the Palmer Museum of Art at Penn State. The museum didn't display the work for two years and then hung it for just two months before putting it back into storage. It's only been shown a handful of times since then, with none of them being at Penn State.

The painting's checkered life has frustrated its creator, so in an effort to raise its profile, Simon Dinnerstein corralled more than a dozen prominent figures in the arts to write about the work for a book he compiled. One of them is Pulitzer Prize winning writer Anthony Doerr.

"You know, if you're a writer and you want to re-visit your work, you can bring it up on your screen or grab it off a shelf quite easily," Doerr says. "And for Simon, this is years of his life, back when you have that energy in your 20s and 30s to make work. A painting like this, those are thousands of hours compressed into a small space, and to have that be in a warehouse must be really, really hard."

It seems to me that the purpose of museums is not just to safeguard art but it is also to share the art.

Now, just about all museums have works that spend a lot of time in storage but are sometimes taken out for specific shows. While The Fulbright Triptych's immense size and unusual style might make it a difficult fit for a general exhibition, no one associated with the Palmer Museum will explain the painting's life in darkness. The curator who acquired the triptych for the Palmer is dead, and both his retired successor and current museum officials declined to comment for this story.

But the artist is persistent.

"It seems to me that the purpose of museums is not just to safeguard art but it is also to share the art," Dinnerstein says. "It's a very difficult situation, I mean, this is like a giant baby and the baby's being locked away in the basement."

Simon Dinnerstein's The Fulbright Triptych is on view now in Columbia, Mo., as part of a touring exhibition of the artists' work. It then travels to Elmira, N.Y. and Reno, Nev., before eventually going back into storage.

Jon Kalish (@kalishjon) is a freelance reporter based in NYC whose reports have been heard on NPR since 1980.