Accessibility links
For Alaskan Coastal Village, Erosion Hits Home Melting permafrost and major storms are eating away at the coastal Alaskan village of Newtok. Residents are desperate to move, but the U.S. has no climate change policy that could help them. 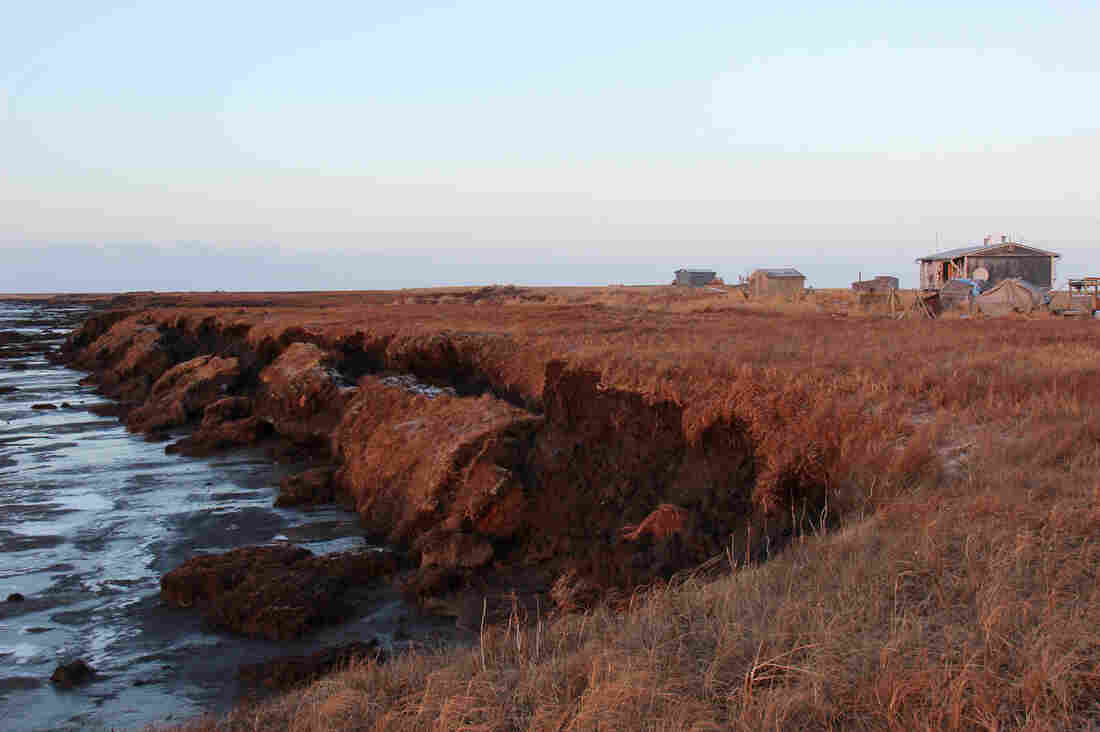 During a storm, the Alaskan village of Newtok can lose 10 to 20 feet of tundra. Erosion is getting worse because of warming temperatures and record low sea ice. Rachel Waldholz/Alaska's Energy Desk hide caption 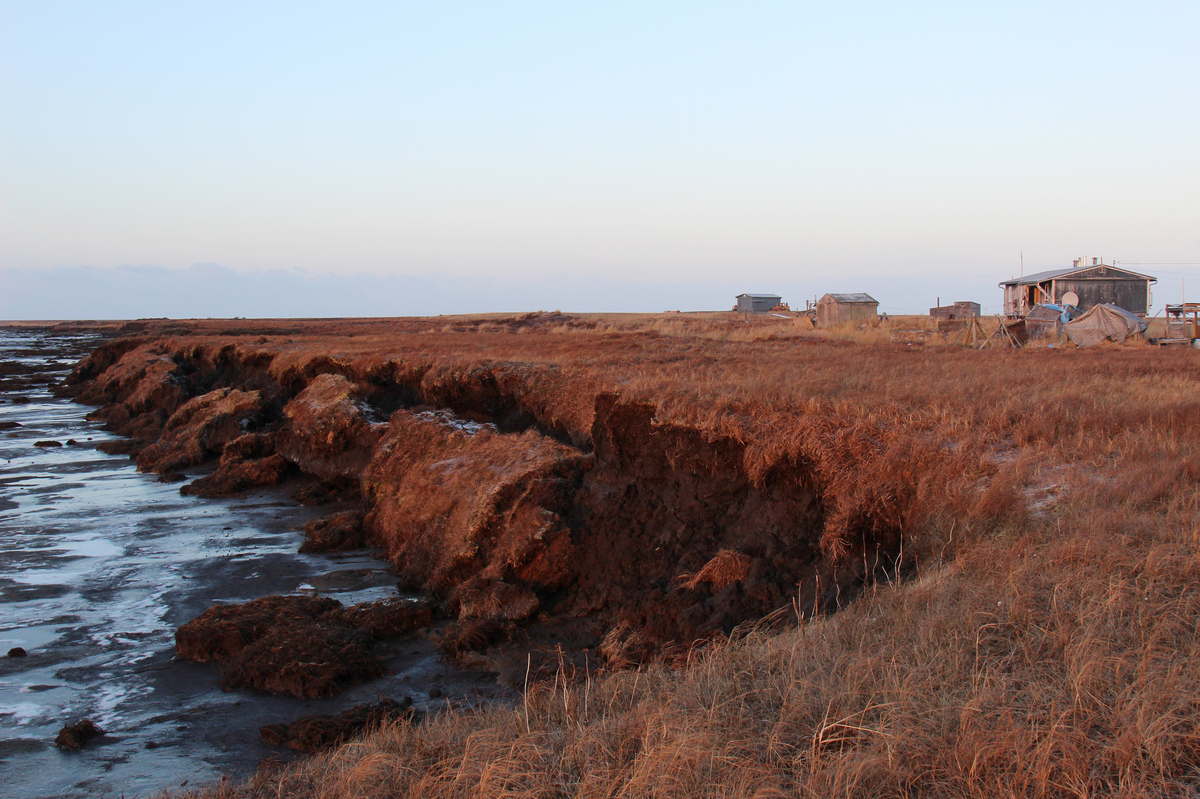 During a storm, the Alaskan village of Newtok can lose 10 to 20 feet of tundra. Erosion is getting worse because of warming temperatures and record low sea ice.

Record low sea ice this fall, and near record warm temperatures, are bad news for villages along Alaska's coast. Winter ice used to serve as a buffer, protecting the shoreline during the region's strong fall storms. Now, it's forming later in the year, leaving communities exposed.

Nowhere is that more evident than in Newtok, which sits on a river not far from the Bering Sea. The later freeze-up has allowed the river to eat away at the village's thawing permafrost. During a storm, blocks of tundra the size of a minivan slump into the water and disappear.

Andrew John, Newtok's tribal administrator, is standing on the bank of the Ninglick River, taking stock after a short trip away.

"I took some measurements and oh my goodness!" John says. "I don't recognize any of this."

Erosion has always been a problem here. But it's getting worse as Alaska warms faster than the rest of the U.S. John estimates that, just this season, the river has torn off 40 feet of tundra.

The nearest homes? They're less than 40 feet away.

Katie Ayuluk lives in one of them, and she says the storms feel closer and closer.

Three generations live in the three-room house where Ayuluk grew up. As she serves baked salmon and duck for dinner, Ayuluk, 24, says when she was little, the river was so far away you could barely see it. Now, she and her husband Dalen say it feels like the storms are at their doorstep. 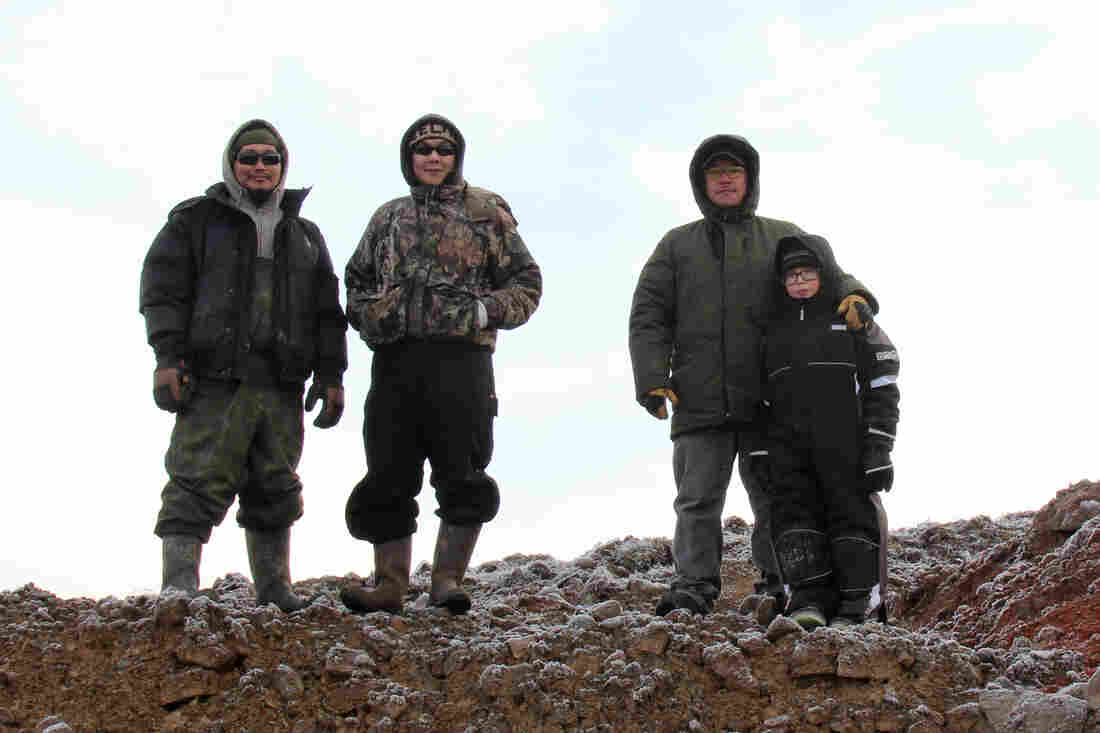 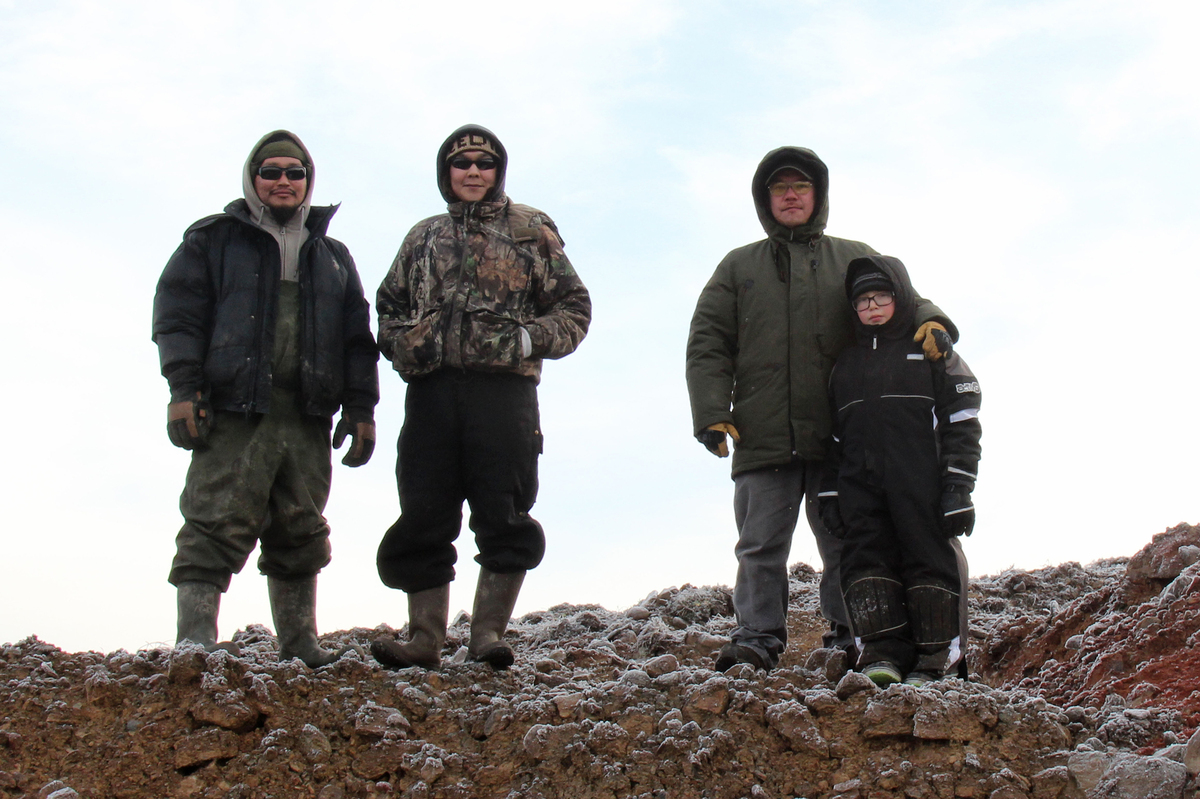 "You're looking at huge swells during a storm," Dalen says. "And when those swells hit the side of the land, you'll see water shoot up."

"Even up to this day," Katie says, "it surprises me there's big waves, even though I've seen it every day of my life. So every day I'm scared."

People here want to move, but not to a distant city like Anchorage, some 500 miles from here.

Connection To Culture And Language

Life in Newtok is distinct. Nearly all of the village's 400 or so residents are Alaska Native. Families depend on hunting and fishing. Stop by the school, and you can hear the pledge of allegiance in the local language, Yup'ik.

People here worry if they're forced to scatter, they'll lose that tight connection to language and culture. 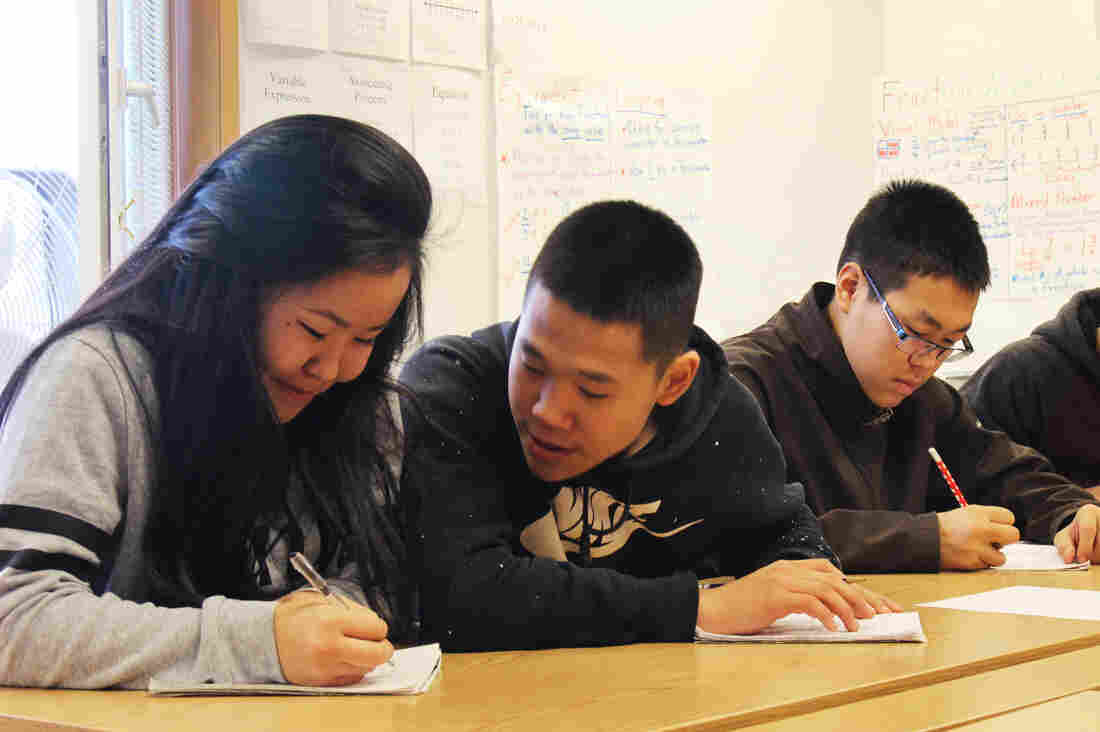 Rosie Matthias, Byron John, and Pedro Active, ninth graders in a Yup'ik language class at the Newtok School. Residents worry they will lose their language and culture if they are forced to scatter as their land erodes. Rachel Waldholz/Alaska's Energy Desk hide caption

So in 2003, Newtok negotiated a land swap with the federal government, hoping to relocate the entire village together.

The new site is a bumpy half-hour boat ride up river into a brutal wind.

"We're going to heaven!" Andrew John shouts over the sound of the motor. "That's what it feels like when we're there. It's beautiful!"

That heaven is Mertarvik — the new Newtok — a site up on the side of a low mountain, firmly grounded in rock. It's not about to erode away.

Over the past decade, the village has pieced together enough funding to start building. There are a handful of modest wood houses, framed this summer. A row of heavy equipment waits for the next construction season.

But the U.S. Army Corps of Engineers estimates it will cost $130 million to move the whole village. In a community where more than 40 percent of residents live below the poverty line, that money will have to come from outside.

'A Disaster In The Making'

If Newtok were destroyed in a single hurricane, the funding might come from the Federal Emergency Management Agency.

"Clearly these are situations that anyone would look at and say, 'This is a disaster,'" she said at a hearing in February. "And if it's not a disaster immediately, it's clearly a disaster in the making."

But FEMA says federal disaster relief isn't meant to deal with the gradual impacts of climate change, like thawing permafrost and erosion. Last year, the Obama administration turned down Newtok's request for a federal disaster declaration. 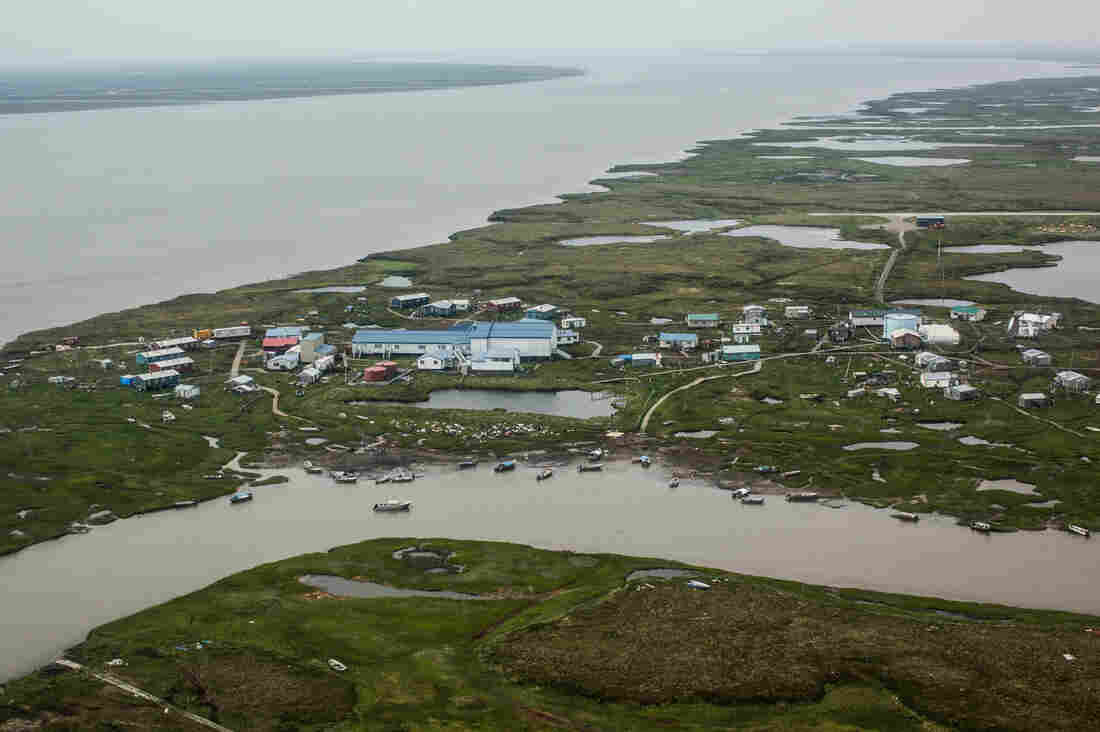 The Alaskan village of Newtok, seen from a plane in 2015, is threatened by eroding land. The Yupik people have lived in coastal areas along the Bering Sea for thousands of years. Andrew Burton/Getty Images hide caption 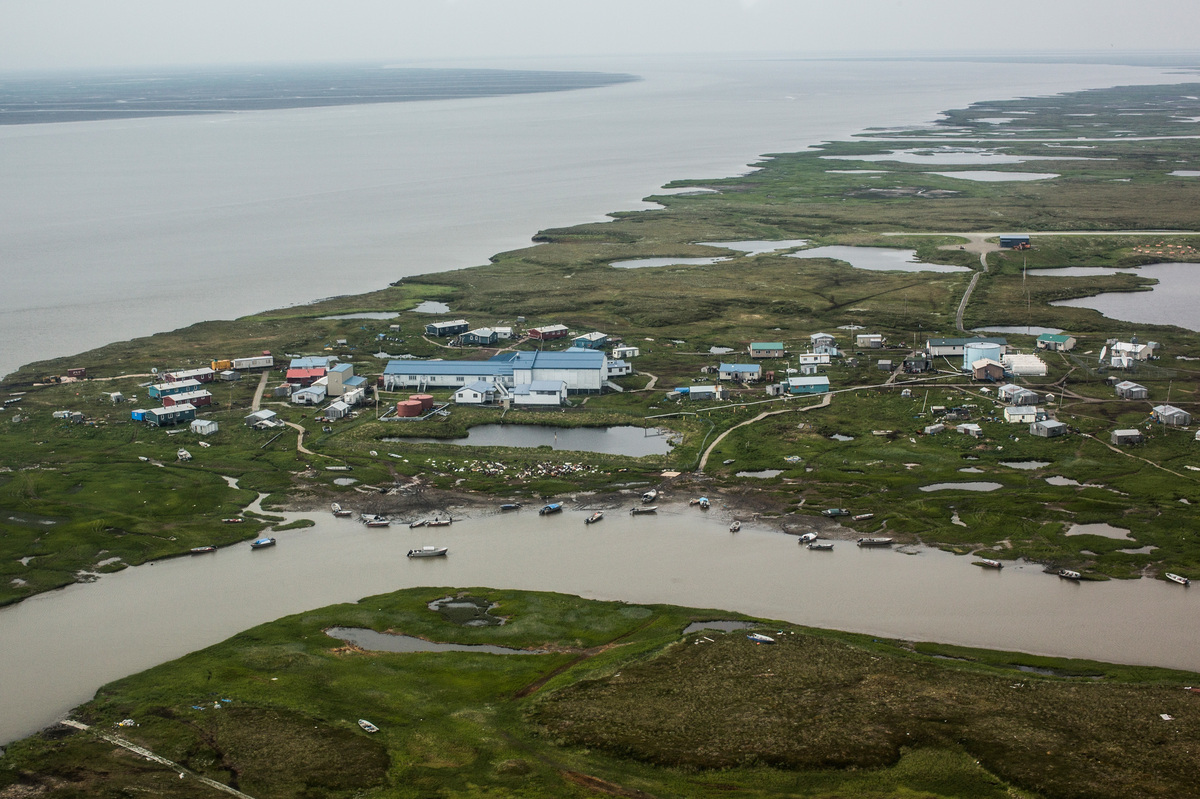 The Alaskan village of Newtok, seen from a plane in 2015, is threatened by eroding land. The Yupik people have lived in coastal areas along the Bering Sea for thousands of years.

FEMA official Alex Amparo told Murkowski that the main law governing disaster relief, the Stafford Act, only recognizes damage from a single major event, like a severe storm or earthquake.

"The situation of a slow-moving disaster in the making is something not contemplated under the Stafford Act," Amparo said, adding that adapting to climate impacts like those facing Newtok will require a "whole of government" response.

That response has yet to happen.

Joel Neimeyer heads the Denali Commission, the federal agency most closely involved in Newtok's relocation efforts. He says this problem is bigger than Newtok.

"We have these examples all across the country where you're having extreme weather events," Neimeyer says. "And as a country we haven't yet resolved the question of how we want to respond to these."

He says Congress never envisioned relocating whole communities. There's no agency in charge of it, no pot of money to fund it. And yet, as climate change hits coastal communities around the country with flooding and erosion, it's a problem we will likely see more and more. 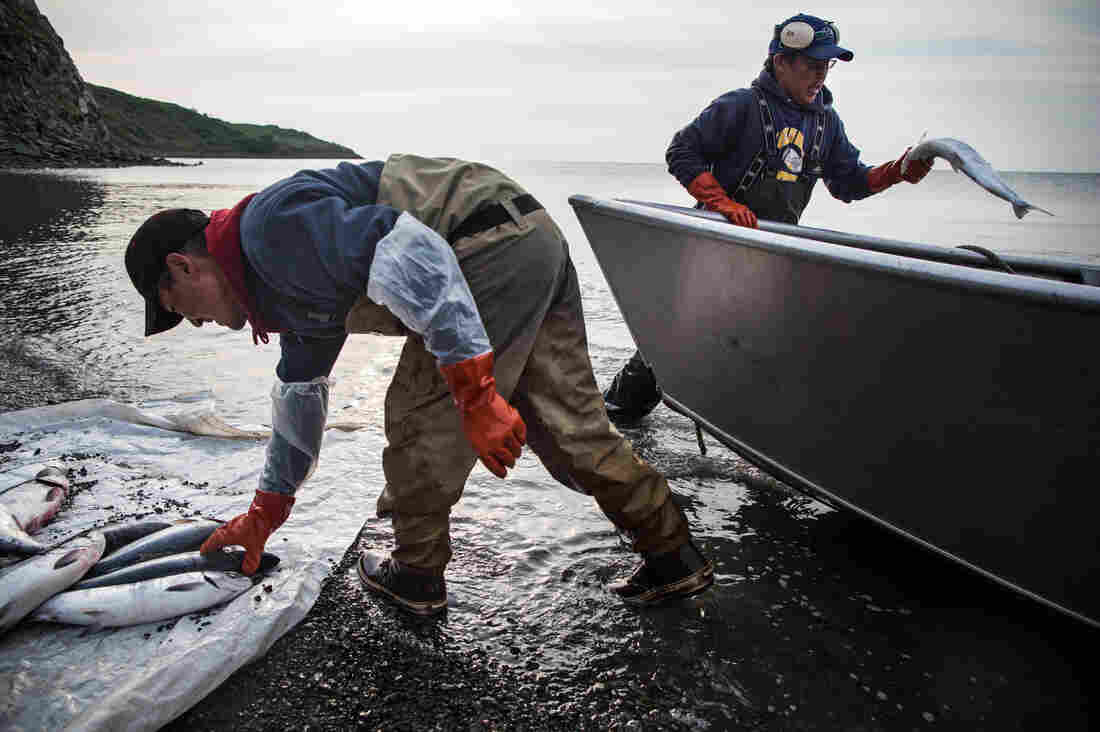 Joseph John Jr. washes freshly caught salmon with his son, Jeremiah John, while waiting for the tide to come in on July 1, 2015 in Newtok, Alaska. Families in the village of roughly 400 people depend on hunting and fishing. Andrew Burton/Getty Images hide caption

In 2016, the Obama administration did offer a grant to move an entire town in coastal Louisiana, but that was a one-time solution.

Neimeyer believes Congress needs to make a decision: In these situations, is it U.S. policy to move whole communities? Or just move families? Or do nothing?

At the new village site, Andrew John and Dalen Ayuluk say, with no coordinated response, their village faces a Catch-22. Federal and state agencies won't devote funding to things like roads or power until enough people live here. But there's no money for housing unless you have that infrastructure.

Ayuluk wishes the rest of the country would decide that his home is worth saving.

"We grew up here," he says. "We fish here, we hunt here. Our community doesn't want to separate. We want to live together. So it's like asking, why destroy that?"

Newtok residents believe they have three or four years, at most, before the river reaches the school and the airstrip. At that point, they'll have to move, whether there's a new home waiting for them or not.