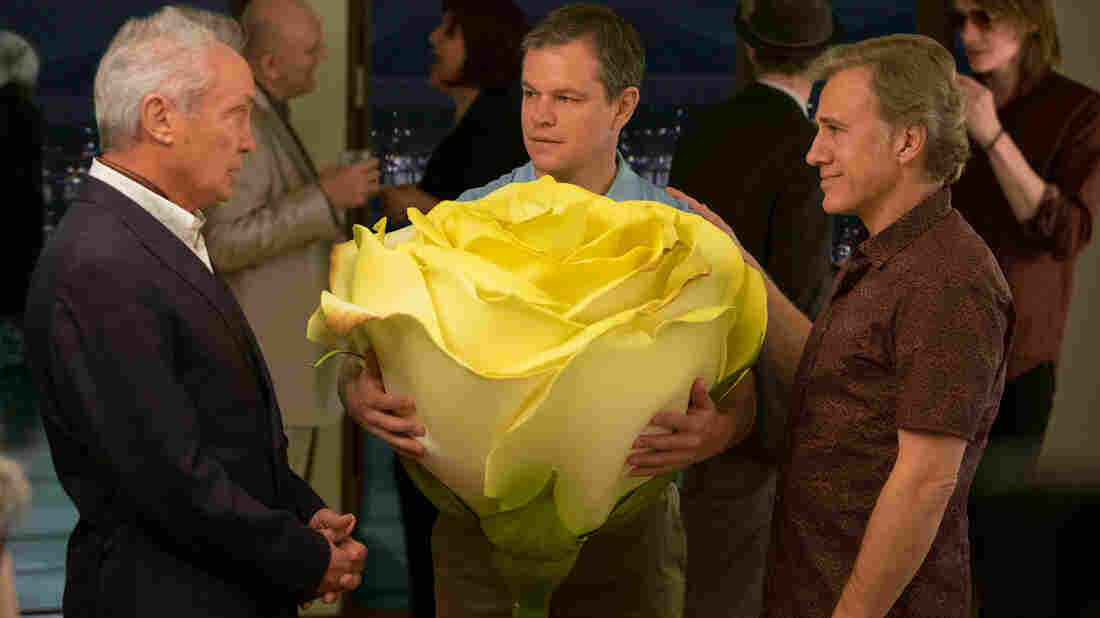 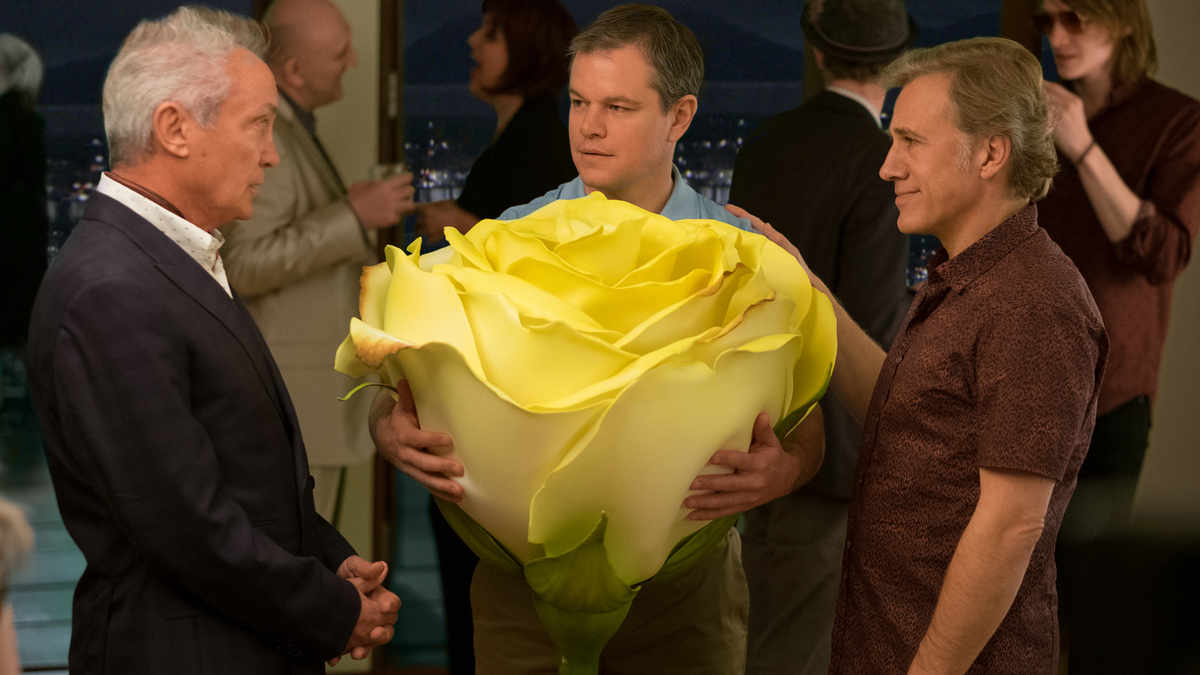 People reduce themselves to the size of peanuts in search of a better life in Downsizing, and an entire colony's waste can fit inside one plastic bag. But the new sci-fi comedy from writer-director Alexander Payne is a gigantic mess at any proportion. It's the rare movie that seems to execute every part of its concept absolutely wrong; a narrative, tonal, visual and sociopolitical fiasco the likes of which haven't been seen in many moons.

Fittingly for a piece of entertainment that means well but misfires at every turn, the film's star, Matt Damon, has been embroiled in his own series of blunders on the Downsizing publicity tour, stemming from his comments about Hollywood's sexual assault crisis. Damon probably wishes he could just shrink himself to nothing and disappear forever inside the film's "Leisure Land," a pint-sized monument to the suburban male ego.

The sad thing about this movie is its core premise offers a solid glimpse of social satire, before Payne's runaway toy train flies off the rails completely. Norwegian scientists have invented a way to permanently shrink people and objects so small that entire cities can fit on one parking lot. The to-be-downsized are required to have all their hair shaved off, for no reason other than that it's quirky, and all their teeth removed because otherwise the film wouldn't haunt your nightmares. The scientists market the downsizing procedure as a means of combating overpopulation, but the hook that really brings them a core following in America is the promise that, once inside their fishnet-protected terrariums, the downsized can live like the kings and queens of Versailles on middle-class salaries. "Best decision I ever made!" one of the film's "smalls" shouts to a married couple of would-be converts from Nebraska (Damon and Kristen Wiig), from her perch in a special protected glass carrier on the bus, entirely at the mercy of the big people who choose on a daily basis not to squish her.

It turns out that downsizing is quite the elastic metaphor, and Payne stretches and kneads the concept like Silly Putty until it no longer resembles itself. It's the real-estate bubble (Payne and co-writer Jim Taylor wrote the first draft in 2009), but it's also an earthy health fad, like going gluten-free, and some sort of nebulous comment on civil rights as smalls get treated differently at restaurants and the like. Then it becomes a new torture, as despotic governments around the world shrink political opponents against their will — a bit of horror this wannabe-Capraesque fable is not remotely equipped to deal with, not least when we meet a major character who's a victim of this practice (more on her later).

The process of downsizing is most dramatically effective when treated as a major life change, the sort where characters get to utter the timeless phrase, "I'll see you on the other side." This is what leads to the film's first of many exhausting crises, when Damon's schlubby occupational therapist Paul goes through with the procedure only to find that his wife Audrey (Wiig) has backed out at the last minute.

What happens next is our first real hint at just how small-brained Downsizing truly is. During the moment of truth, Payne cuts to Wiig, bug-eyed and with a bald head and one eyebrow, hamming it up as she wails about how awful she feels. This is a serious moment in the narrative, right? She's abandoned her husband to a lifetime of shrinkage because she couldn't bring herself to live as a bug for the rest of her life. The film plays it for sour farce, asking us to laugh at a crazy lady who left her husband not-so-high and dry. Then it abandons her, so that we may have more time to watch a depressed Damon shuffle alone through his brand-new McMansion, eventually befriending a Eurotrash partier of dubious origin (Christoph Waltz, never more obnoxious) and slowly, sloooowly realizing that it might be nice to help other people for a change.

It's mind-boggling how little imagination, visual or otherwise, a movie about tiny people can have. Downsizing is written and shot in such a way as to frequently obscure the very fact of its characters' smallness. It's set largely in environments that were artificially constructed for the downsized, so that the houses, when shot from "ground" level, just look like normal homes (and once Paul gets downsized, almost every scene takes place inside a home; there's hardly any exploration of the "larger" world). The unpacking of this concept happens almost exclusively via dialogue, with throwaway lines about shipping boats in FedEx mailers instead of actually seeing a boat shipped in a FedEx mailer. There are moments of oddball charm, like the sight of a grown nurse prying a tiny naked man from a gurney with a spatula, but they're offset with lumpy, time-wasting scenes of Paul discovering hard partying and taking selfies.

Anyway, yes, that dissident. She's a Vietnamese activist named Ngoc Lan Tran, and played by Hong Chau with heavily broken English and strict, clipped speech. Chau, who was actively involved in the creation of the character, has fought accusations that Ngoc's mannerisms make her a stereotype, and insists she's "not used as a punch line." Nevertheless, the audience at one advance screening laughed uproariously every time she spoke lines like "Need money for live" and "You help Gladys good," and the film presents her in such a way so that her true nature can't be seen or understood by anyone, not even potential love interests. So if this woman isn't a stereotype, who is she?

Maybe she's supposed to be the film's conscience. For Ngoc, who was forcibly shrunk by her government and shoved into a TV box destined for sale in America, being downsized is not a fantasy of a better life but a life sentence. She loses her leg on the journey, and hobbles on a prosthetic while cleaning apartments in the suburban nightmare kingdom, living in a makeshift walled-city trailer park just outside of town with all the other poor people, so she can teach humility to the white dollhouse man. You see, here is the grand acid joke of this whole affair — that even in an Incredibly Shrinking America where the value of the dollar is automatically inflated for one special class, there will always be foreigners within that class to do the dirty work for us.

Of course there's truth to a theme like this, but Payne presents his societal ant farm with the smug air of the enlightened man who's already figured all of this out and is just waiting for the rest of us to catch up. It's pretty brazen to point out that you're aware of the class differentials in your own movie, filling the margins with immigrants and working-class faces, while using this theme merely to underline your boilerplate middle-class midlife crisis. Downsizing is far from the first Payne film about pitiful older single men, but it's a far cry from Election, where the sad sack had a worthy adversary and the movie didn't seem to be taking massive effort to bend his way. By the time we reach the climax, which naturally concerns the end of the world, the delusions of grandeur that once defined Payne's sense of humor have hijacked the whole playpen. Amid all these bonkers plot twists and celebrity cameos, you might not even register that this film is slouching toward an argument for a master race.

How did we get here? Through the conclusion of Downsizing's premise that, if selfishness has destroyed the planet, it would take a degree of selfishness to save it. An army of Lilliputians drag our concept of life down until it only belongs to the smallest and most toothless among us, and for these interminable minutes, it's as though Planet Earth was never really big and beautiful at all.