Accessibility links
The Year in Gigs: Nate Chinen's Top 10 Jazz Performances Of 2017 In jazz, the best albums of the year only tell part of the story. What's happening at street level — in small venues, clubs and festivals — shows the pulse of the music in real time.

The Year in Gigs: Nate Chinen's Top 10 Jazz Performances Of 2017

The Year in Gigs: Nate Chinen's Top 10 Jazz Performances Of 2017 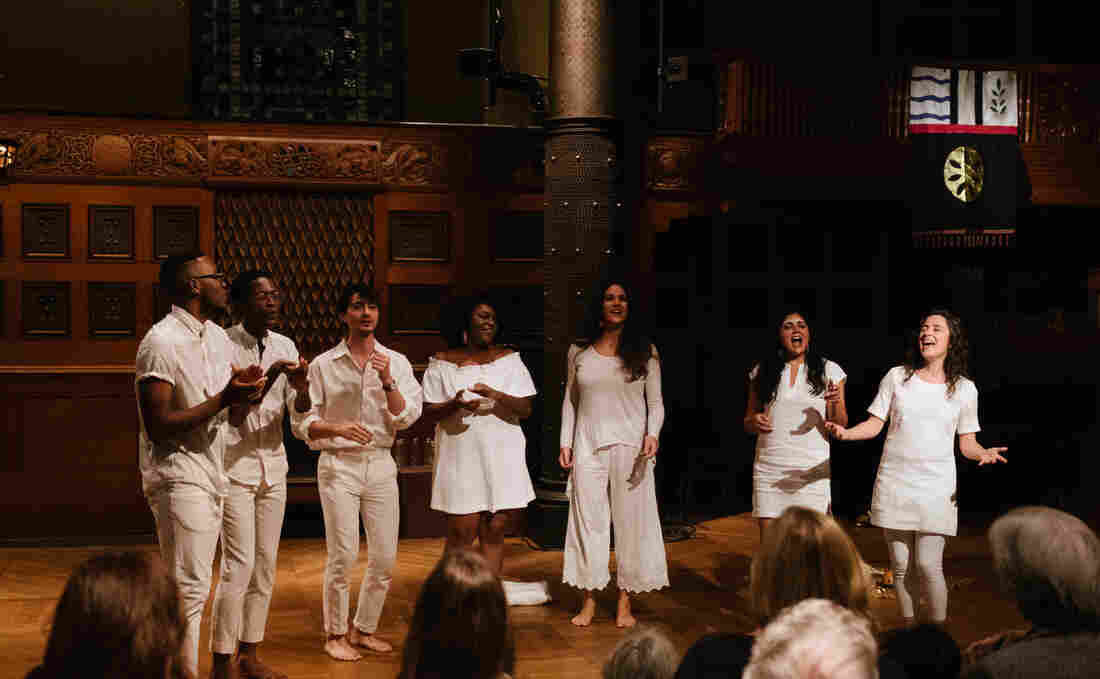 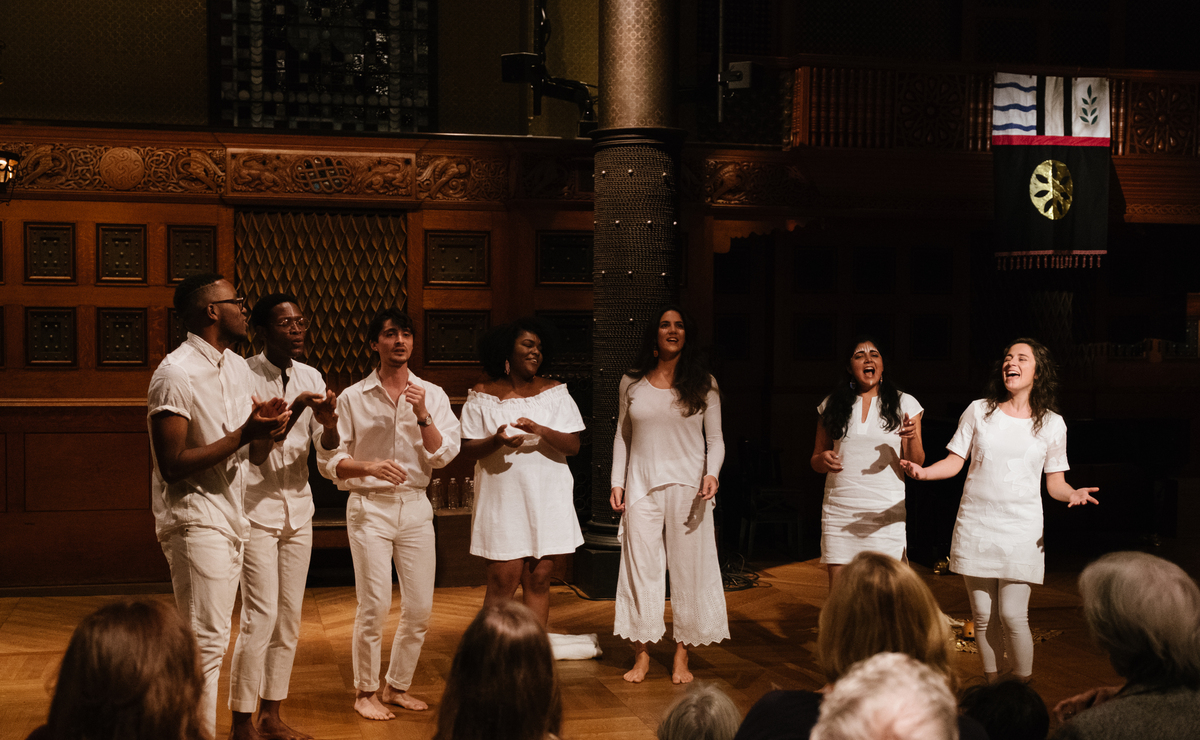 The premiere of "Folk Songs of Naboréa," a song cycle for seven voices and kora by Kavita Shah, presented at the Park Avenue Armory in New York in November, was one of Nate Chinen's gigs of the year.

This was an excellent year for jazz on record, across every possible iteration of style. (If you're seeking evidence for the claim, consult the 2017 NPR Music Jazz Critics Poll.) But it's always worth pointing out that albums only tell part of the story, which often assumes different dimensions at street level, where the music pulses in real time.

So while I poured a lot of care and deliberation into my own best albums list, the year was largely defined by other factors. I'm remembering a head-spinning tour of the scene in Havana, Cuba, and the high bar for musicianship I encountered there. I'm thinking about the wrenching loss of pianist Geri Allen, and the waves of shock and sadness that followed. I'm recalling some encouraging scenes at major summer jazz festivals, in Newport and Detroit.

And then there are the gigs. I have a tradition of compiling my Top 10 under a banner I like to call The Year in Gigs, which ran for more than a dozen years in my column in JazzTimes. This year's edition finds a common thread in performances that stretched and challenged my perceptions.

That isn't a process unique to the avant-garde, though it's well represented here. These performances, covering a wide sonic and stylistic range, were simply the all-around standouts. As usual, I'm listing them in chronological order, and looking ahead to the new year.

Just before the engagement that yielded an exemplary double album, A Rift in Decorum: Live at the Village Vanguard, trumpeter and composer Ambrose Akinmusire led his working band in a less formal but just as serious gig upstate. As I observed at the time, the performance was "an enthralling tempest, distinguished both by refinement and risk."

Douglas devoted this Jazz at Lincoln Center concert to a summit of his avant-garde jazz heroes, including fellow trumpeter Wadada Leo Smith, alto saxophonist Oliver Lake and drummer Andrew Cyrille. But he also deployed those fearless improvisers — and others, like percussionist Susie Ibarra and pianist Myra Melford — in small and responsive groupings, so that the takeaway wasn't a riotous provocation so much as a glow of communion.

The eminent composer and saxophonist Wayne Shorter returned at long last to Newark for a festival in his honor at the New Jersey Performing Arts Center. And after a warmup duo set with Herbie Hancock on piano and synths, Shorter led his flagship quartet in a flat-out magnificent concert, making even the phrase "conquering hero" seem like some kind of faint praise.

She had the year's runaway debut in Fly or Die, an album bristling with kinetic force and unruly ideas. And Branch, a trumpeter who never lets an advanced technical vocabulary get in the way of direct expression, applied the same alignment of forces here, working with Tomeka Reid on cello, Jason Ajemian on bass and Chad Taylor on drums.

A solo flute piece by Edgard Varèse, and a historic performance by Eric Dolphy, set the spark for Chase — a virtuoso flutist and pathfinding conceptualist — to create her epic "Density 2036." The version she presented here was boundless, fearless and spiky with intrigue, drawing on the compositional input of partners like Pauchi Sasaki (prowling the stage in an interactive "speaker dress") and Tyshawn Sorey (thrashing hard and smart behind a percussion rig).

To kick off its weeklong Ornette Coleman tribute, the Lincoln Center Festival presented a rare screening of David Cronenberg's Naked Lunch, with this live performance of the score by Howard Shore. The orchestral colors were vibrant and exquisite; so were the interjections of two Ornette stand-ins, tenor saxophonist Ravi Coltrane and alto saxophonist Henry Threadgill.

This was just another night of the week for Johnny O'Neal, a bebop pianist and cocktail singer whose quality of expression runs almost as deep as his reservoir of tunes. But O'Neal has a way making the everyday feel rare, and his casual mastery in this set — full of midcentury-modern obscurities and fluttery torch songs — was a reminder of how lucky New Yorkers have been to have him back on the scene in recent years.

Just one track on Cécile McLorin Salvant's sublime new double album, Dreams and Daggers, features her with pianist Sullivan Fortner. But I saw the duo on two separate occasions this year, coming away each time in awe at the loose, insinuative swing in their rapport. This early set, on the second night of a weeklong run, was one for the books.

Reed, a freethinking drummer, bandleader and composer from Chicago, devoted his current album, Flesh & Bone, to the unpacking of a traumatic racial encounter. His performance at the October Revolution of Jazz & Contemporary Music — with the band and poet Marvin Tate against a backdrop of video screens — put the music's rangy counterpoint in a contemplative frame.

Eade is a jazz singer of roving insight and imperturbable grace; Blake is a master pianist drawn to the power of elision and suspense. As on their stunning new album, Town and Country, they drew some twine around a bundle of American songs. Then the smart young vocalist Kavita Shah presented the premiere of "Folk Songs of Naboréa," a song cycle for seven voices and kora, which dares to peer beyond the apocalypse toward a more harmonious form of chaos.