Accessibility links
McConnell Ready To 'Move On' From Obamacare Repeal, Others In GOP Say Not So Fast With an even slimmer GOP majority in the Senate in 2018, Senate Majority Leader Mitch McConnell doesn't see much of a point in repeating health care efforts that failed this year. 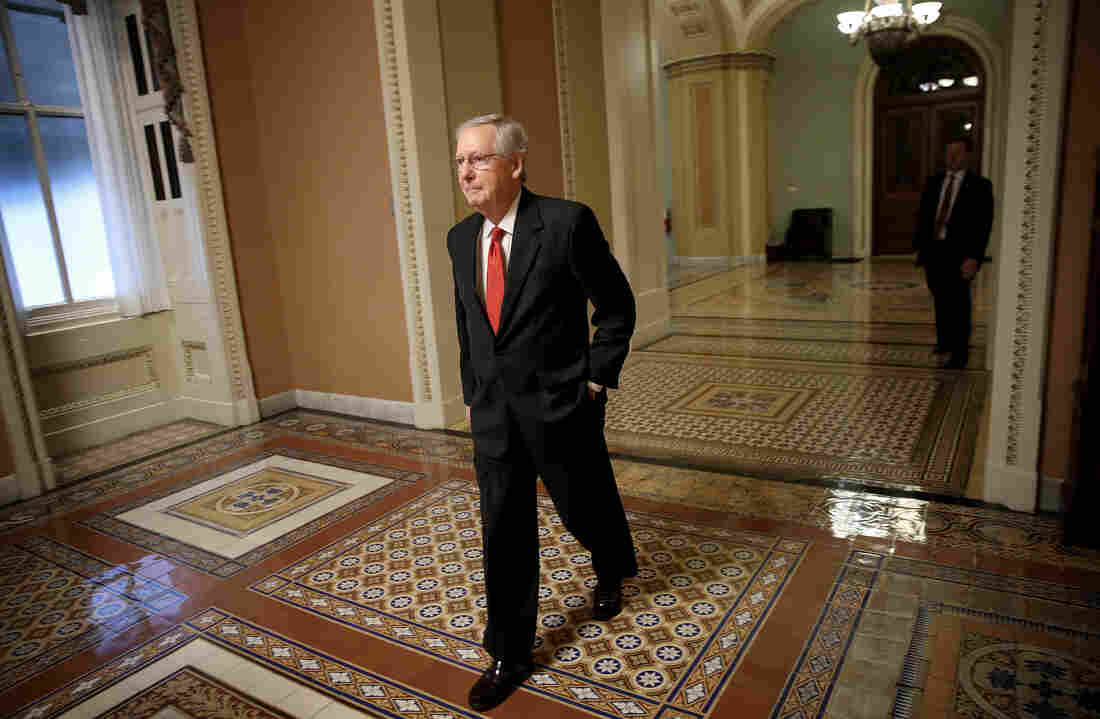 Senate Majority Leader Mitch McConnell, R-Ky., says that in 2018, he wants to focus on issues that his party could work with Democrats on. Win McNamee/Getty Images hide caption 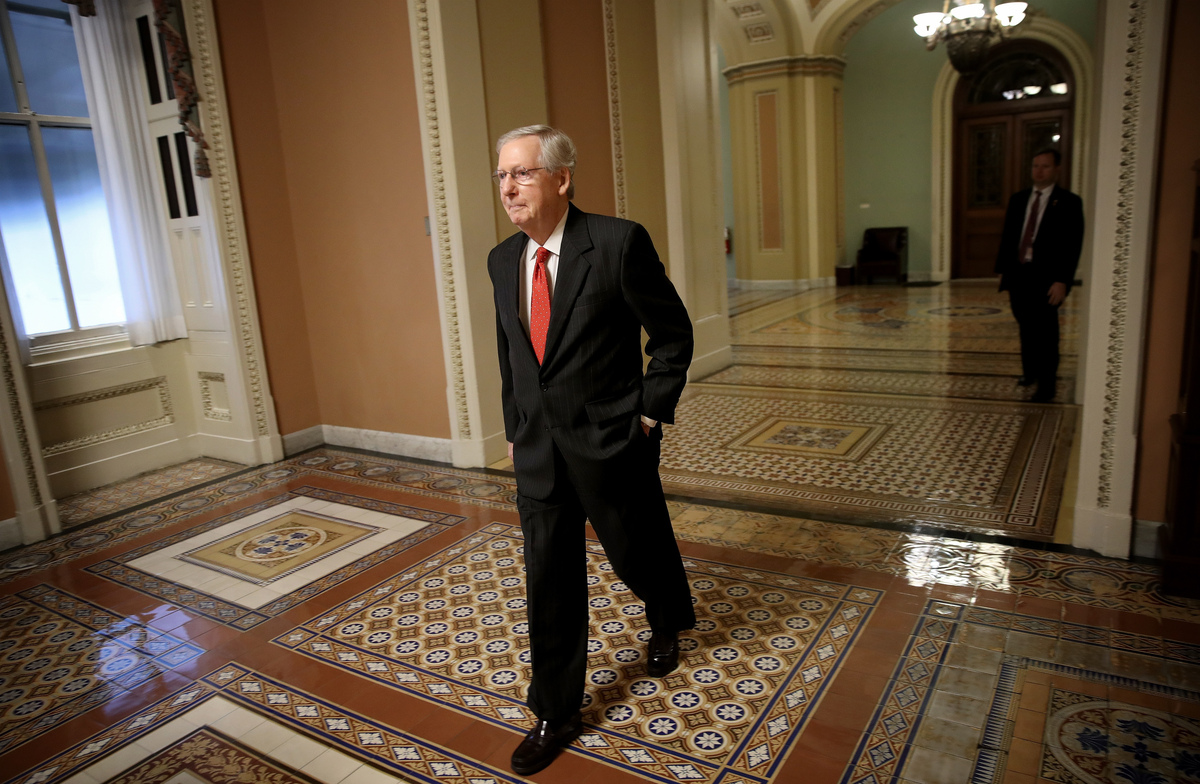 Senate Majority Leader Mitch McConnell, R-Ky., says that in 2018, he wants to focus on issues that his party could work with Democrats on.

Senate Majority Leader Mitch McConnell wants 2018 to be a year of bipartisanship, even if that means moving on from GOP dreams of cutting welfare and fully rolling back the Affordable Care Act.

The Kentucky Republican on Thursday broke with House Speaker Paul Ryan, R-Wis., on the approach to paring back spending on programs like Medicaid and food stamps. In an interview with NPR, McConnell said he is "not interested" in using Senate budget rules to allow Republicans to cut entitlements without consultation with Democrats.

"I think entitlement changes, to be sustained, almost always have to be bipartisan," McConnell said. "The House may have a different agenda. If our Democratic friends in the Senate want to join us to tackle any kind of entitlement reform, I'd be happy to take a look at it."

McConnell said he wants to spend much of next year focused on issues on which Republicans can work with at least some Democrats in the Senate.

"This has not been a very bipartisan year," McConnell said. "I hope in the new year, we're going to pivot here and become more cooperative."

Republicans spent most of the year struggling, and failing, to follow through on promises to repeal and replace the Affordable Care Act, also known as Obamacare. Democrats refused to work with Republicans while they were trying to dismantle President Barack Obama's signature domestic achievement, and McConnell hopes that next year will be different.

"Well, we obviously were unable to completely repeal and replace with a 52-48 Senate," McConnell said. "We'll have to take a look at what that looks like with a 51-49 Senate. But I think we'll probably move on to other issues."

McConnell is referring to the political reality that the odds for legislation with only GOP support become longer in January when Sen.-elect Doug Jones, a Democrat from Alabama, takes office.

Republican demands to gut the ACA also declined after Congress effectively eliminated the individual mandate by zeroing out the tax penalty in Obamacare as part of the tax bill approved this week. McConnell hopes to focus instead on stabilizing the insurance marketplaces to keep premiums from skyrocketing in the early months of 2018, a promise he made to moderate Republican Sen. Susan Collins of Maine to get her support for the tax bill.

"I think the repeal of the individual mandate takes the heart out of Obamacare," McConnell said. "We want to steady the insurance markets if we can ... and I think we'll probably be addressing that part of health care sometime next year."

Republican Sen. Lindsey Graham of South Carolina immediately pushed back on McConnell's comments. "To those who believe — including Senate Republican leadership — that in 2018 there will not be another effort to Repeal and Replace Obamacare — you are sadly mistaken," Graham said in a statement and on Twitter.

I’m fully committed to Repealing and Replacing Obamacare in 2018 by block-granting the money back to the states and away from Washington bureaucrats who are completely unaccountable to the patients of America.

After the major push to repeal and replace the Affordable Care Act over the summer, Graham joined with Sen. Bill Cassidy, R-La., to promote a bill that would deconstruct the programs that make up the ACA and hand the funds over to the states to run their own programs. It would have gotten rid of the law's subsidies that help low-income consumers purchase insurance and the expansion of Medicaid that it allowed.

McConnell also plans to spend much of the year persuading skeptical voters to embrace the GOP tax overhaul. Recent polls have shown that a majority of voters expect to pay more under the tax bill, a perception McConnell hopes to disprove in the coming months.

"I do think the coverage has been overwhelmingly negative, and it certainly has an impact on it," McConnell said. "You take a family of four making $73,000 a year [that] will save about $2000. Now, to lot of people inside the Beltway that doesn't sound like a lot of money, but to that family, that's a 58 percent reduction in their tax bill."

CHART: How The Final Version Of The Republican Tax Bill Would Affect You

McConnell also expects bipartisan work will continue in the Senate probe into Russian meddling in the 2016 election. McConnell said he hopes the investigation will conclude in time to give voters confidence in the security of the elections process ahead of the midterm election in November.

"I'm looking forward to a recommendation from them, and I'm hoping that it will be a bipartisan recommendation," McConnell said. "Because if it breaks into pure partisanship, no one's going to pay any attention to it."

He also rejected the notion that President Trump is preparing to fire special counsel Robert Mueller. "The only people that talk about that are the Democrats," McConnell said. "But I don't hear anybody at the White House or any Republicans, and certainly not in the Senate, calling for Mueller to be fired."