Accessibility links
In 'Downsizing,' A New Addition To The Large History Of Tiny People In Film Alexander Payne's new film is about a couple who are made tiny as part of a solution to overpopulation. It's the latest in a long line of movies that revel in the cinematic joy of people shrinking. 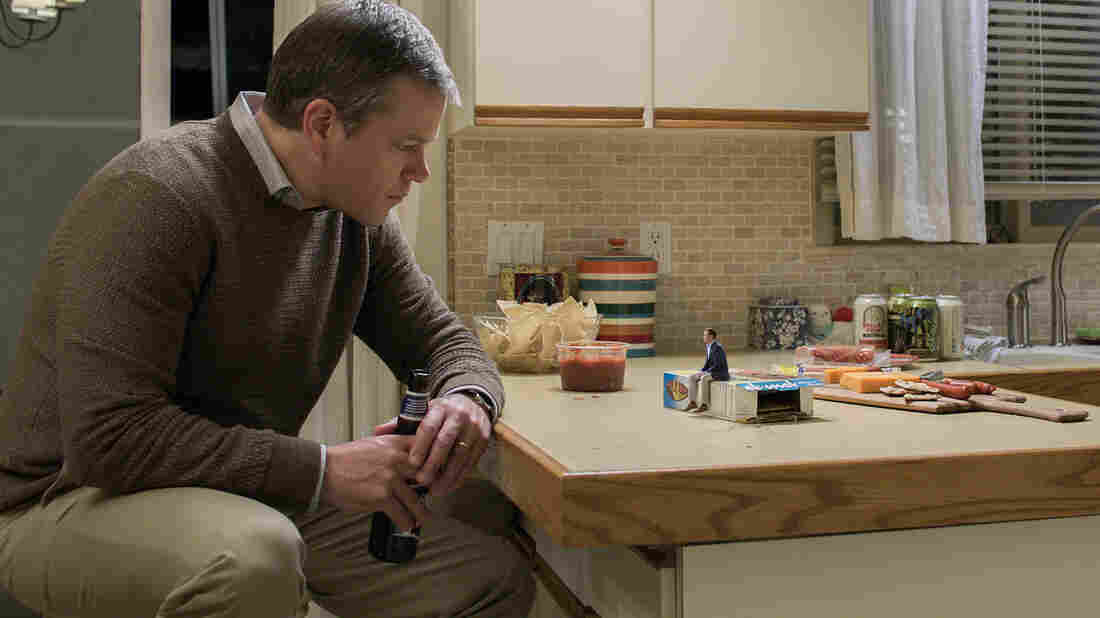 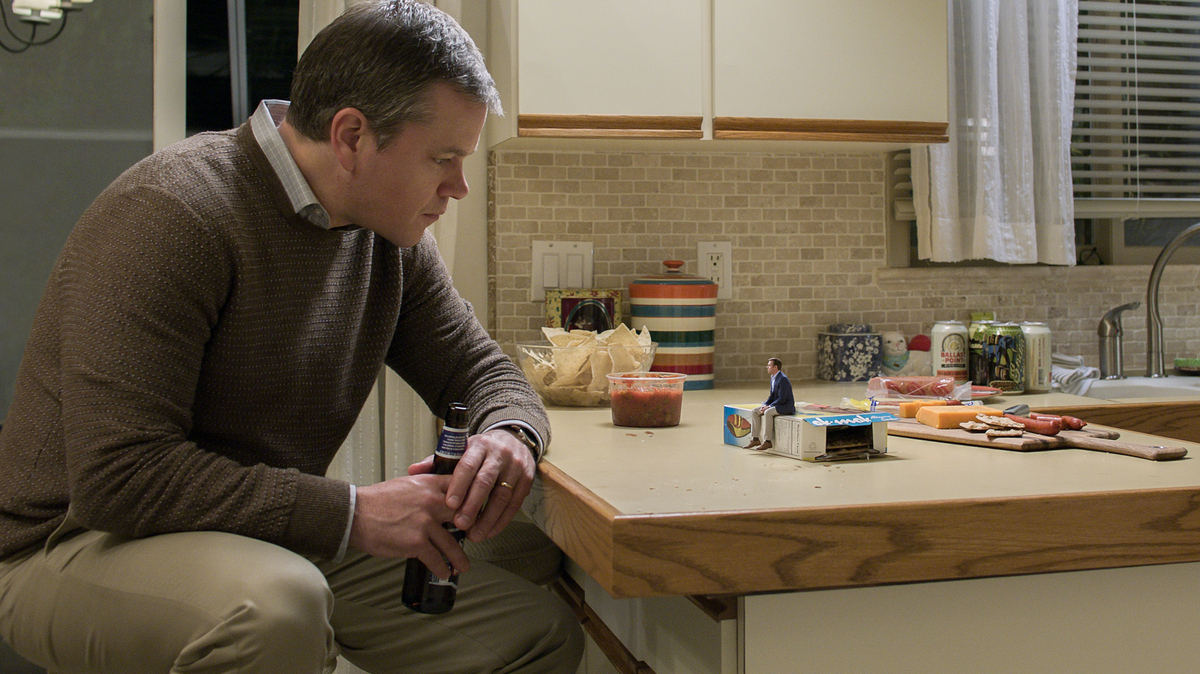 Matt Damon as Paul Safranek and Jason Sudeikis as Dave Johnson in Downsizing from Paramount Pictures.

The long — and admittedly odd — tradition of people shrinking in the movies goes back at least to 1901, with a silent film called The Dwarf and the Giant. The most recent is the new movie Downsizing, directed by Alexander Payne (Election, The Descendants). In between is an entire canon, ranging from Fantastic Voyage to Innerspace to Honey, I Shrunk The Kids.

The fascination with making people small on the big screen makes sense to Payne.

"We already are tiny," he said in a recent phone conversation. "Every year, we find out more from astronomers just how tiny we are in the universe."

In Downsizing, a team of scientists develops a way to shrink people to save the environment. After all, tiny people have tiny carbon footprints. But the incentive to get small is economical. Shrinking gets marketed to the middle class as a way to live large. When you're only 5 inches tall, you can move to a grand mansion the size of a dollhouse in a special, tiny, planned community, replete with golf courses and Cheesecake Factories, where savings stretch much further than in the big world.

"In Leisureland, your $52,000 translates to $12.5 million to live on for life," explains one pitchwoman to the main character, played by Matt Damon.

Director Alexander Payne On Mining Every Film For Comic Potential

All irony is intentional, Payne says. "People are getting small in order to consume more," he points out.

But the notion of getting small to save the planet was explored earlier in a horror movie from 1936, says film professor Julie Turnock. In The Devil-Doll, scientists try to fight world hunger by making people shrink. "The technology in that movie is developed for the same reason: to save resources," she says.

However, unscrupulous characters (including a grandly cross-dressing Lionel Barrymore) use the shrinking technology for nefarious purposes. The Devil-Doll came out during the Great Depression, and Turnok says shrinking people in the movies often reflect economic anxieties.

"We owed a great deal of money and I had no job," moans the main character in The Incredible Shrinking Man, who is literally diminishing in stature. That 1957 science-fiction classic speaks to all kinds of Cold War concerns, from radioactive exposure to changing gender roles.

"The person at the top is now at the bottom, and the patriarch of the house is now being chased by the house cat," Turnock notes, which in itself became a shrinking-people-movie cliché.

"There's normally someone who gets attacked by a cat!" Jake Morrison, a special effects supervisor, says.

He watched a ton of shrinking movies before working on the superhero film Ant-Man. The live-action movie from 2015 features a suit that shrinks the main character to the size of an insect. In keeping with the theme of economic anxiety, he is an ex-convict trying to pull his life together.

Morrison used something called a macro lens to create a hyperrealistic world where a mote of dust is gigantic and a bathtub drain is perilous. (Ant-Man avoided cat clichés, but there is a brief run-in with a mouse.)

He says that in fact, you can tell the story of Hollywood special effects partly through the story of shrinking movies. "Every single shrinking film is essentially the best use of the technology that was available at the time," Morrison says, pointing to a 1959 live-action Disney film about a leprechaun.

"Darby O'Gill and the Little People did some amazing work with forced perspective where they poured so much light on set, so everything was in focus," he says.

Forced perspective is essentially the same trick people use when they're standing far away from the Eiffel Tower and take pictures to make it look as though it's pinched between their thumbs and forefingers. In Darby O'Gill and the Little People, one actor was filmed from a distance so he seemed the size of an elf.

"Way ahead of its time and always pushing the bounds," Morrison observes approvingly, adding that advanced variations on the same technology — forced perspective — was also employed in the Lord of the Rings movies to film the dwarves and hobbits.

The purpose of a what-if, science-fiction social satire premise, like the one we have in 'Downsizing,' is to give us perspective on the real world.

People have always been attracted to stories where people get littler, such as Alice in Wonderland and Gulliver's Travels. There's a pleasure to the idea of being invisible, of being able to creep into tiny spaces. And right now, the metaphor is more obvious than ever, says director Payne, for stories of people feeling diminished by the world and the scale of its challenges.

"The purpose of a what-if, science-fiction social satire premise, like the one we have in Downsizing, is to give us perspective on the real world," he says. "And to let us see — in an entertaining way — [and] help us look at these problems and give us some distance from them."

And also, to remind us that small things can have significance.