Accessibility links
Puerto Rican Island 'Still In Crisis Mode' 3 Months After Maria The health clinic is operating, often by flashlight, out of tents. The island's bleak recovery epitomizes the unevenness of the disaster relief effort in the hurricane-devastated U.S. territory. 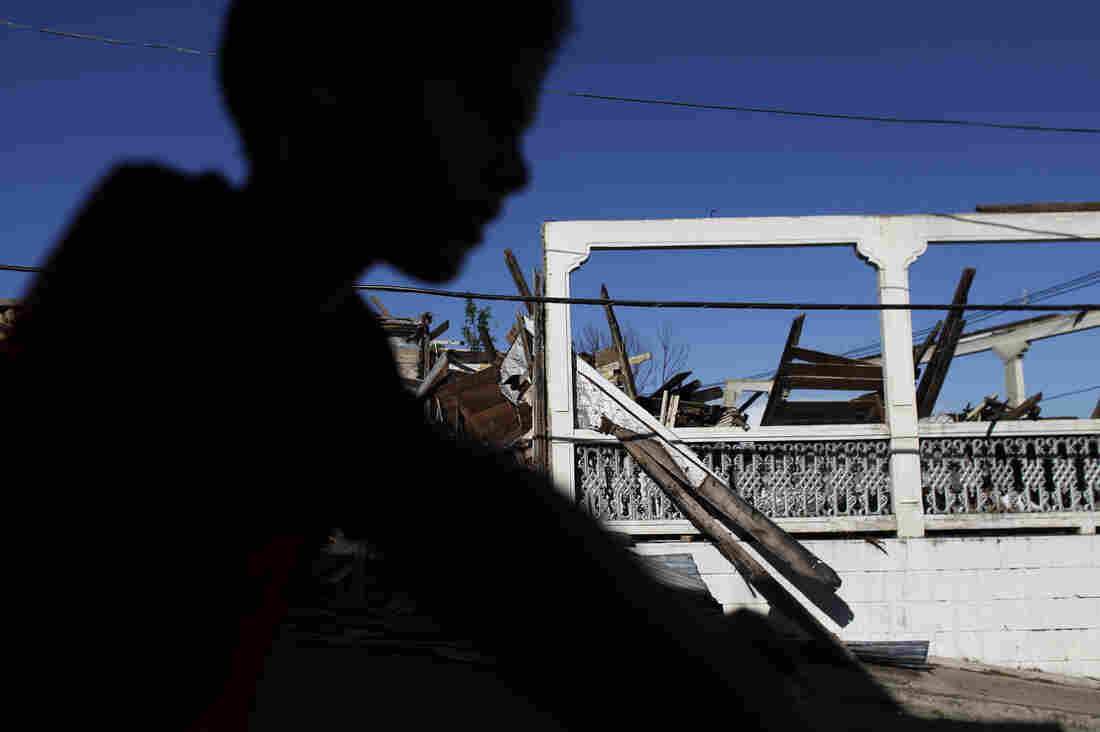 A child rides a bike by a house destroyed by Hurricane Maria in Vieques, Puerto Rico. Ricardo Arduengo for NPR hide caption 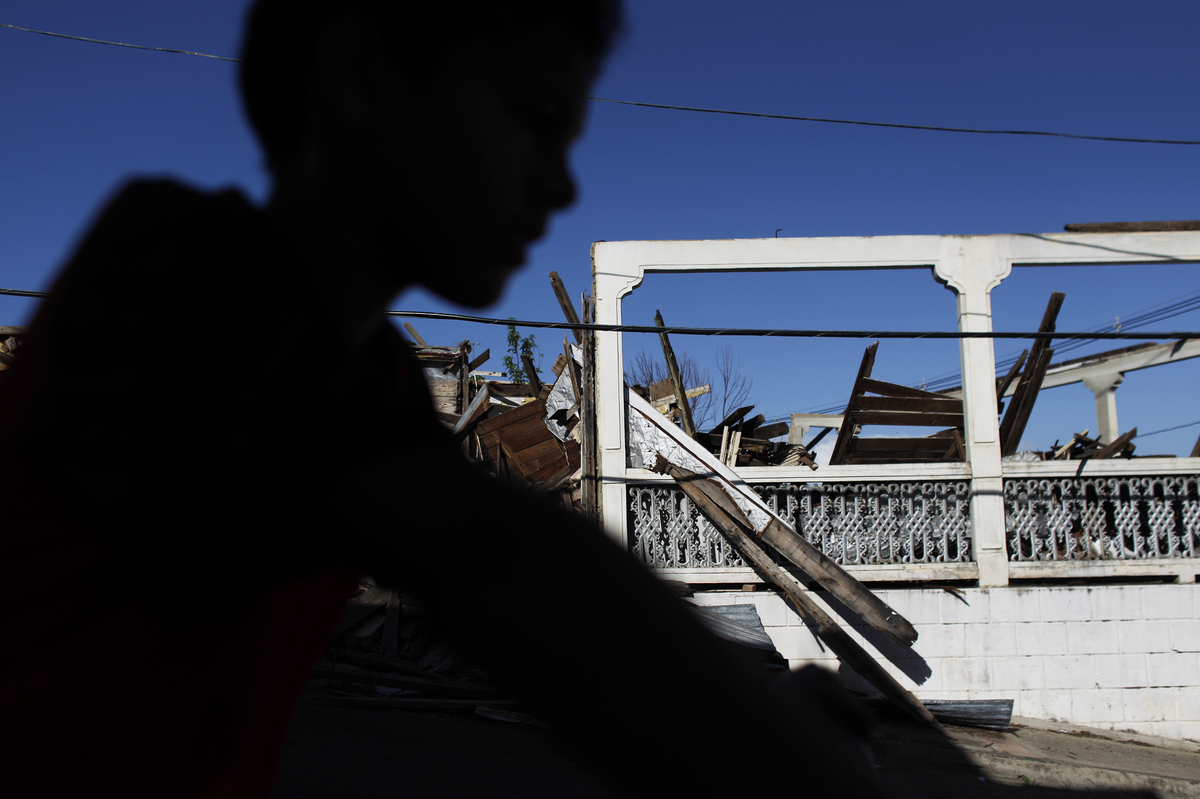 A child rides a bike by a house destroyed by Hurricane Maria in Vieques, Puerto Rico.

On an island eight miles off Puerto Rico's coast, homes sit destroyed on hillsides and many of its nearly 9,000 residents still wait for federal aid. Vieques' hospital is operating out of tents in a parking lot. And the island is facing the prospect of six more months without electricity from Puerto Rico's main grid.

The island's bleak trajectory epitomizes the unevenness of the disaster relief effort in the hurricane-devastated U.S. territory, where metropolitan areas such as San Juan are showing clear signs of recovery.

At Vieques' bar La Nasa, couples sway on a dance floor to the beats of a generator-powered stereo system. A bartender pulls beers out of a cooler. The original bar was reduced to rubble from the hurricane and washed into the sea. 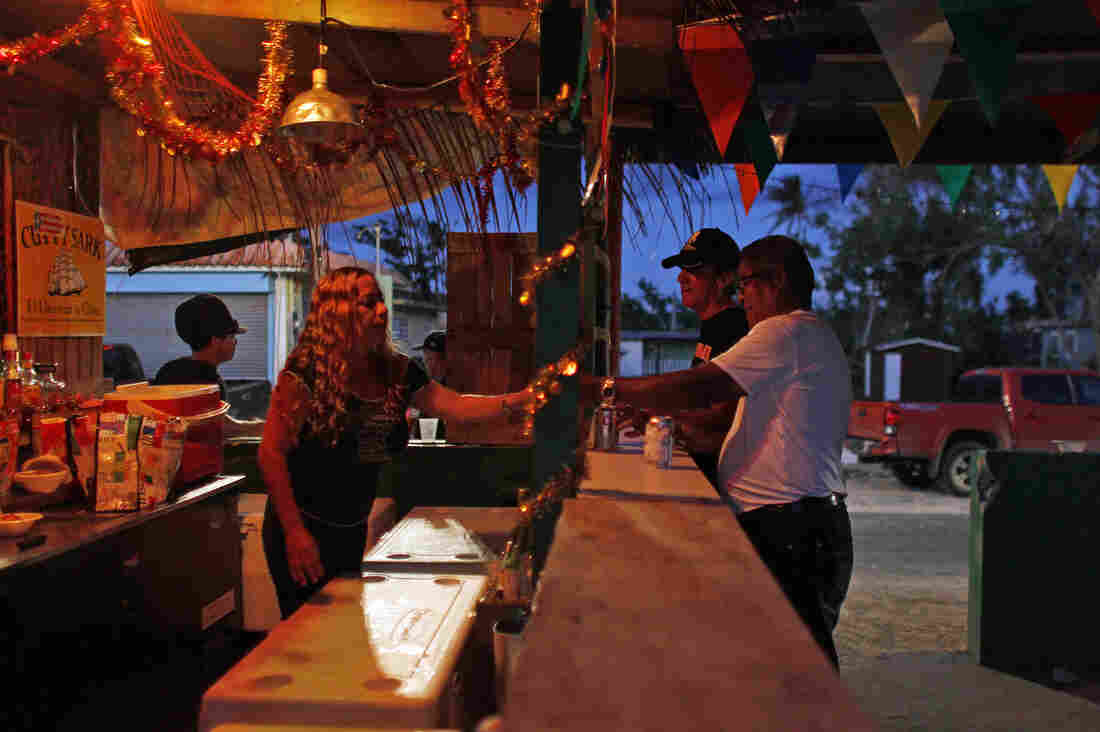 A bartender serves drinks at La Nasa bar in the Esperanza beachfront neighborhood in Vieques. The original bar was reduced to rubble by the hurricane and washed into the sea. Ricardo Arduengo for NPR hide caption

"It was a mess! A big mess," laughs owner José Silva, standing in the sand. The new bar is a colorful rickety patio next to a pile of debris, the wreckage of the original. Silva says that after the hurricane, he scavenged wood to reconstruct the small bar and opened within a week.

"You know people they was stressed out, they was so sad that the place was gone, they just wanted to come and cry," Silva adds.

Cut off from power

The storm cut Vieques off from Puerto Rico's main electrical grid. A new holiday song for the upcoming Epiphany celebration is playing on this night, with a gift request. It goes, I'll ask the three kings to bring a new generator.

That message resonates here, where there's vocal frustration about the island's troubled main generator station, meant to provide power to Vieques residents when the connection to the main grid is down. That generator is riddled with problems.

"You can ask any resident of Vieques and they will tell you that that generator doesn't work, that it's a piece of junk," says Haronid Cruz Felix, the animated spokesperson for the mayor. 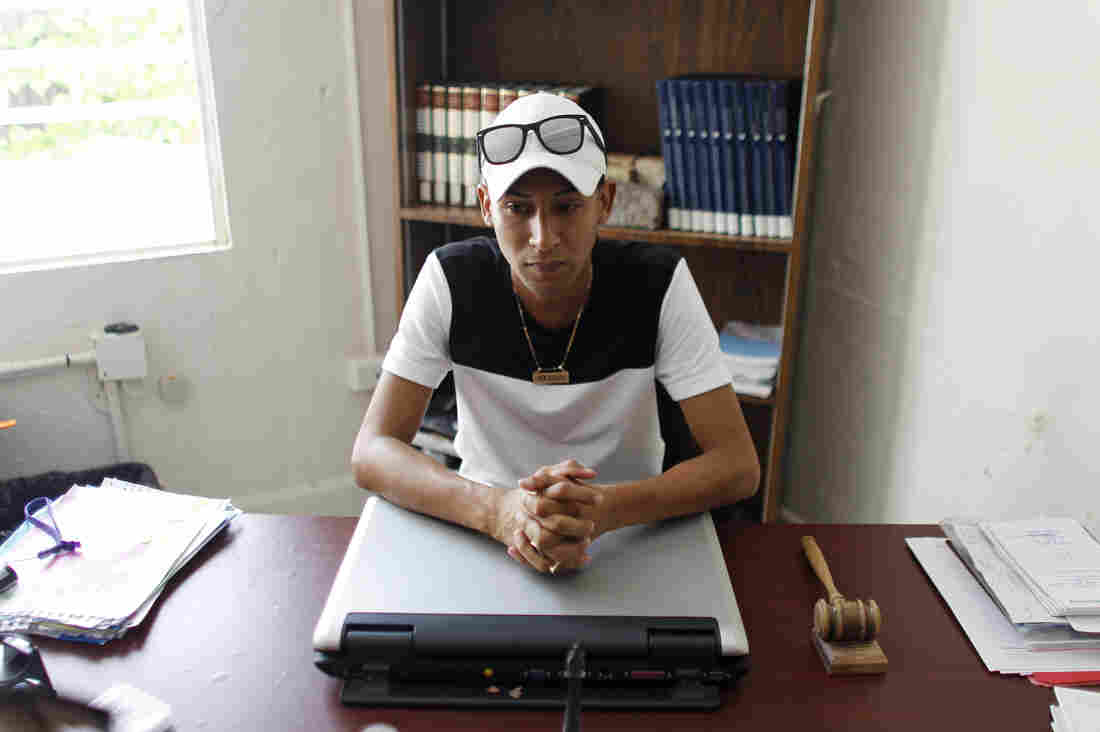 At that generator station on a recent morning, red lights flashed on the control board. Carlos Perez, the operator of the generator, says it finally started working five days before, after months without power.

But on this recent morning Vieques was totally without power again, after a new problem arose a few hours earlier, causing the system to shut down. Perez works for Puerto Rico Electric Power Authority, also known as PREPA. Residents say the generator is now providing some service to a limited number of buildings.

Perez says there are a lot of reasons for the generator's problems. It uses French parts that are difficult to replace and they don't store spares. "If you don't have parts when things break down, you don't have a generator," he says. And it uses hundreds of gallons of diesel hourly, which can be difficult to transport to the remote island. Plus, the power lines and poles in Vieques are damaged, limiting the number of homes that electricity can flow to even when the generator is working.

Felix says he's frustrated by a lack of communication from PREPA. "The only date that we have been given for Vieques to have regular power is between March and May," he says. The utility did not respond to requests for comment – Perez, the generator operator, said simply that restoring regular power from the grid system that runs underwater from the main island of Puerto Rico to Vieques is "going to take some time." 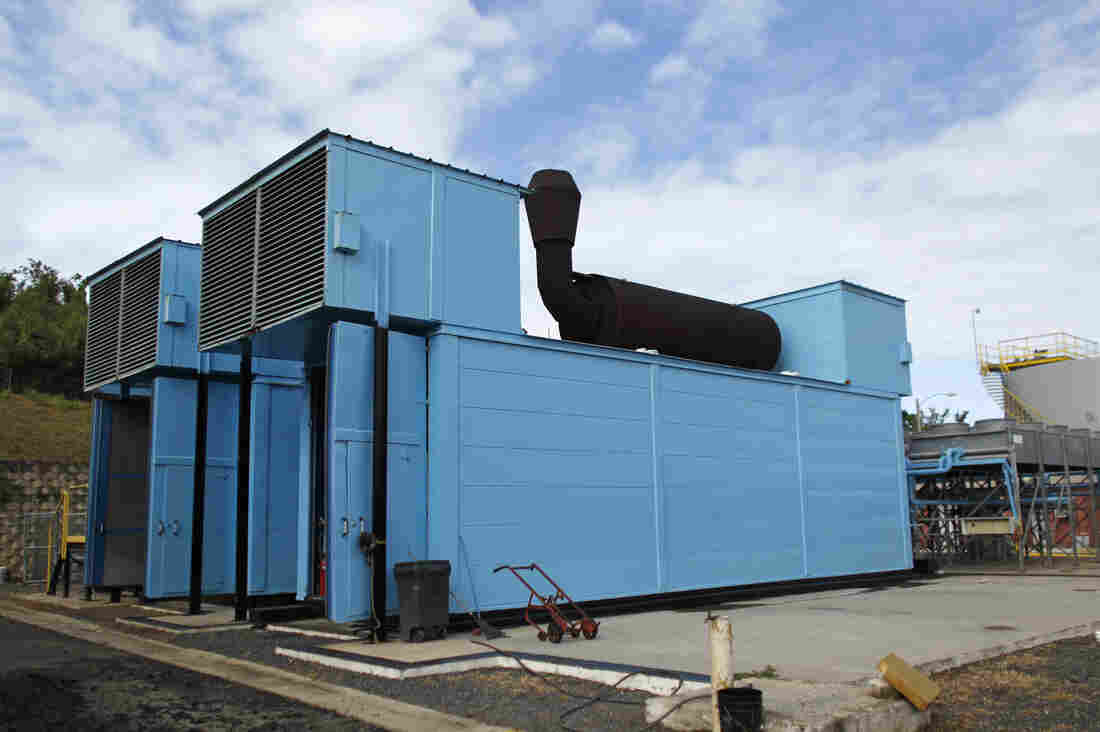 Puerto Rico Power and Electric Authority's generator station, meant to be a backup for the main grid, is riddled with problems. Ricardo Arduengo for NPR hide caption

There's a lot of blame going around for the plight of Vieques. The mayor's spokesman says the electricity company, the Puerto Rican government, and the federal government all played a role. Like many here, he feels the island has been marginalized at many levels of government. Many of the residents here also believe the mayor has not responded with enough urgency to the situation.

The island was used for decades as a training ground for the U.S. military, including bombing exercises – a fact that Felix believes should mean more effective assistance from the federal government. "Sixty years bombarding these lands and the government has not even been able to get a power generator up and running? It's on that level," he says. 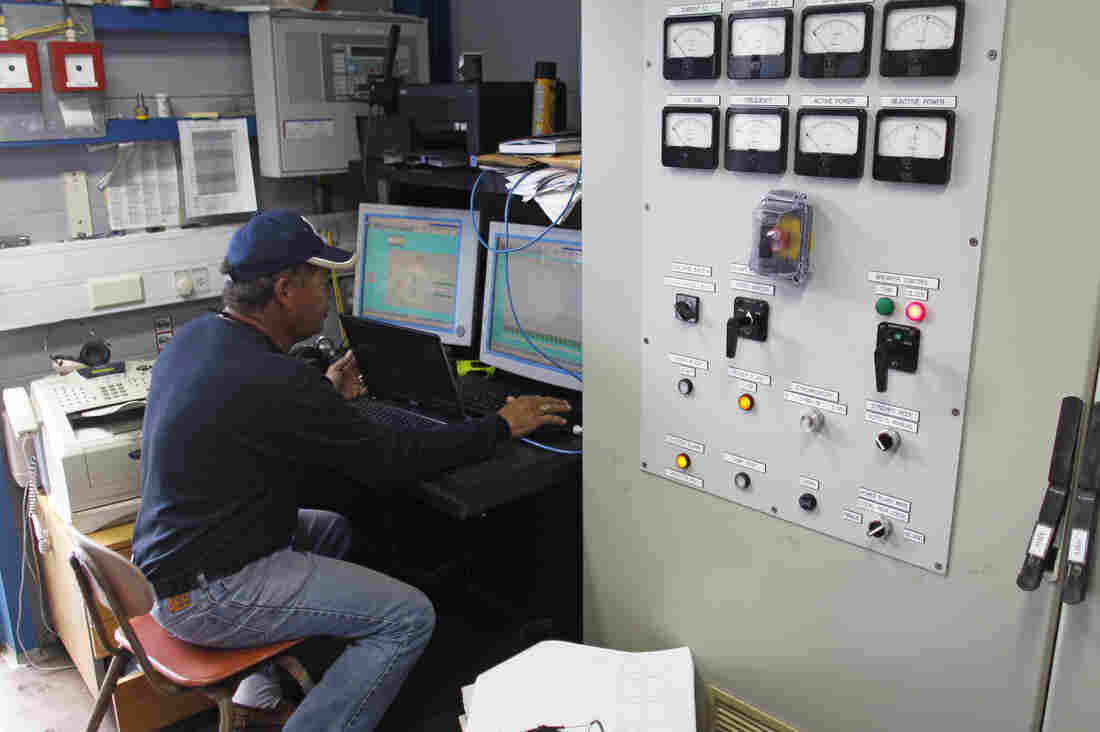 Puerto Rico Power and Electric Authority operator Carlos Perez shows how the generator power is down once again on the island. Ricardo Arduengo for NPR hide caption

The island didn't have regular running water for a nearly month, until generators were secured specifically to operate the pump, Felix adds.

Not having electricity for months is time-consuming. Seventy-seven year old Juan Santos, taking a walk on the beach with his wife, says he has to go to the grocery store and purchase food daily or else it will spoil. "What you find in the stores, sometimes you don't like what you buy but you have to eat it!" he laughs, sounding tired.

Cell service is patchy and shifting, far worse than metropolitan areas such as San Juan. "I think it's just ludicrous that in this day and age we don't have communications and we still don't have electricity," says Gladys Aleman, who co-owns a Vieques-based ecotourism company. "We were two, three weeks after Maria and we still couldn't make a phone call. I still can't call, I can't text ... I blame everybody. This is crazy to me." She says it's impossible to operate a business without communications.

"We are still in crisis mode," Aleman adds.

Tourism had been a growing industry on this beautiful island, where horses wander on lush hillsides and bioluminescent sea life glows in the water. Since the storm, tourism has dried up. The largest hotel and the island's second-largest employer, the W Vieques Island, is closed through Dec. 2018.

'This is how I suture'

The vulnerability of Vieques is starkest at the island's hospital. Hospital Susana Centeno was damaged by the storm and is now closed due to a dangerous amount of mold, Felix says. 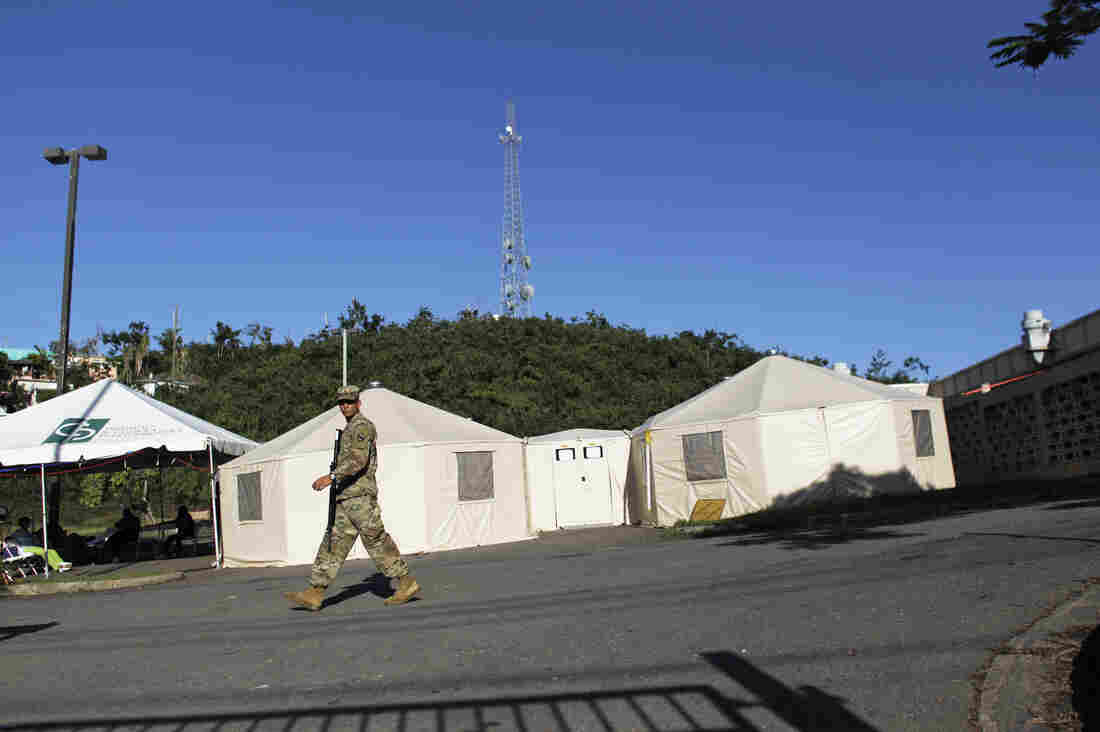 A Puerto Rico National Guard member walks past the health clinic in Vieques, operating out of tents in a parking lot. Ricardo Arduengo for NPR hide caption 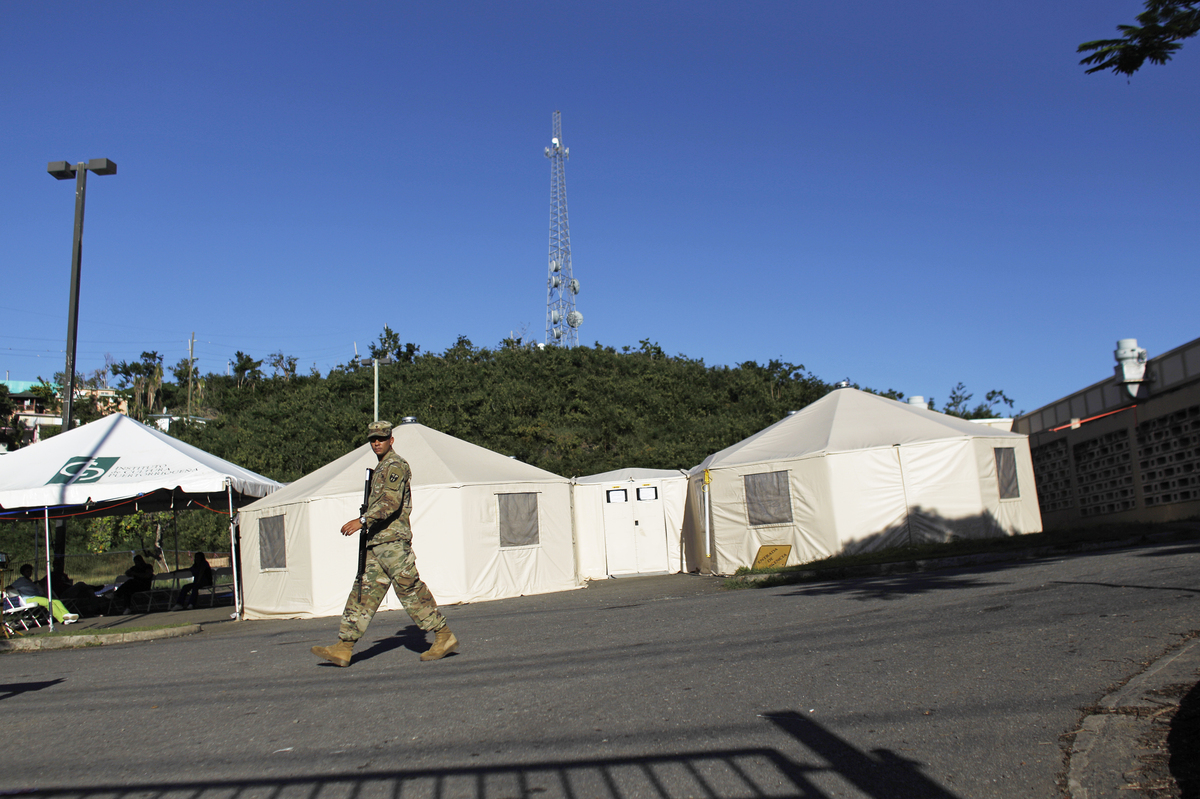 A Puerto Rico National Guard member walks past the health clinic in Vieques, operating out of tents in a parking lot.

Now, it's operating in tan military-style tents in the parking lot. "I consider this camping," says Dr. Jose Carrasquillo, the physician at the facility. This clinic doesn't even have a port-a-potty – the restroom is a shallow bowl suspended on spindly metal legs with a lid, positioned outside one of the tent flaps.

Now, Carrasquillo, who has an easy laugh even in tough circumstances, says his medical work depends on improvising. He has to makes do with what he has. To demonstrate how he operates in the dimly lit tents, he pulls out a small flashlight and holds it between his teeth.

"This is how I suture," he says. "Because the patient needs it."

The doctor operates without equipment that would be standard in most hospitals. And transporting patients with more serious injuries to a proper facility isn't always possible. 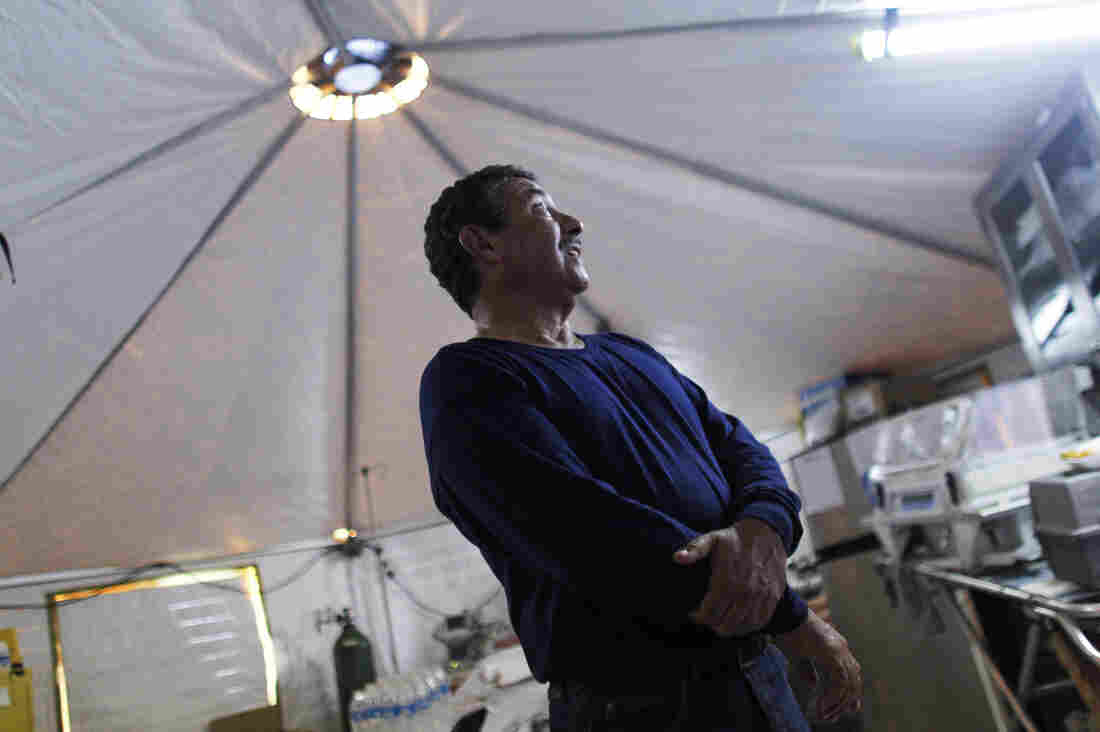 Dr. Jose Carrasquillo works in the clinic run out of military-style tents, which does not have the equipment that would be standard in most hospitals. Ricardo Arduengo for NPR hide caption

"If the weather is bad, no one gets out of here," he says. "That means I'm going to have to treat anything that comes here. That's a challenge." For example, he says he recently treated a man burned by a generator that exploded, and a young girl impaled by a screwdriver.

Local authorities are going through a lengthy approval process to turn a school into a hospital.

The improvised facility "scares me, it's not going to last long," Carrasquillo adds. "And the hurricane season is going to come in six months, again."

In the facility's parking lot is a field of solar panels, a technology seen as a source of hope to residents held prisoner by the dysfunctional electricity system currently in place.

Puerto Rico's governor, Ricardo Rossello, recently announced a series of solar electricity projects using Tesla energy storage, including one at this hospital. On Vieques, the sanitary sewer treatment plant, the water pumping station, a home for elderly people and the Boys and Girls Club of Vieques will also have these systems, according to the announcement.

"We understand the need to provide energy options to improve resiliency when there is a grid outage," Rossello said in a press release about Vieques and its neighboring island Culebra. 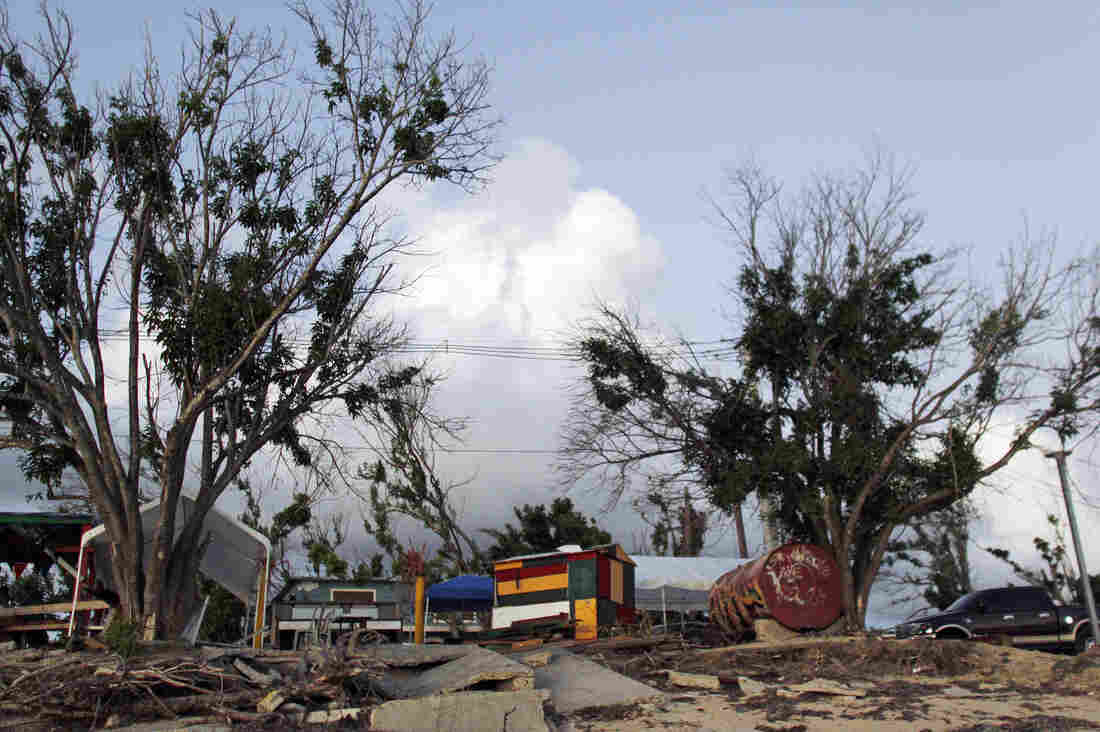 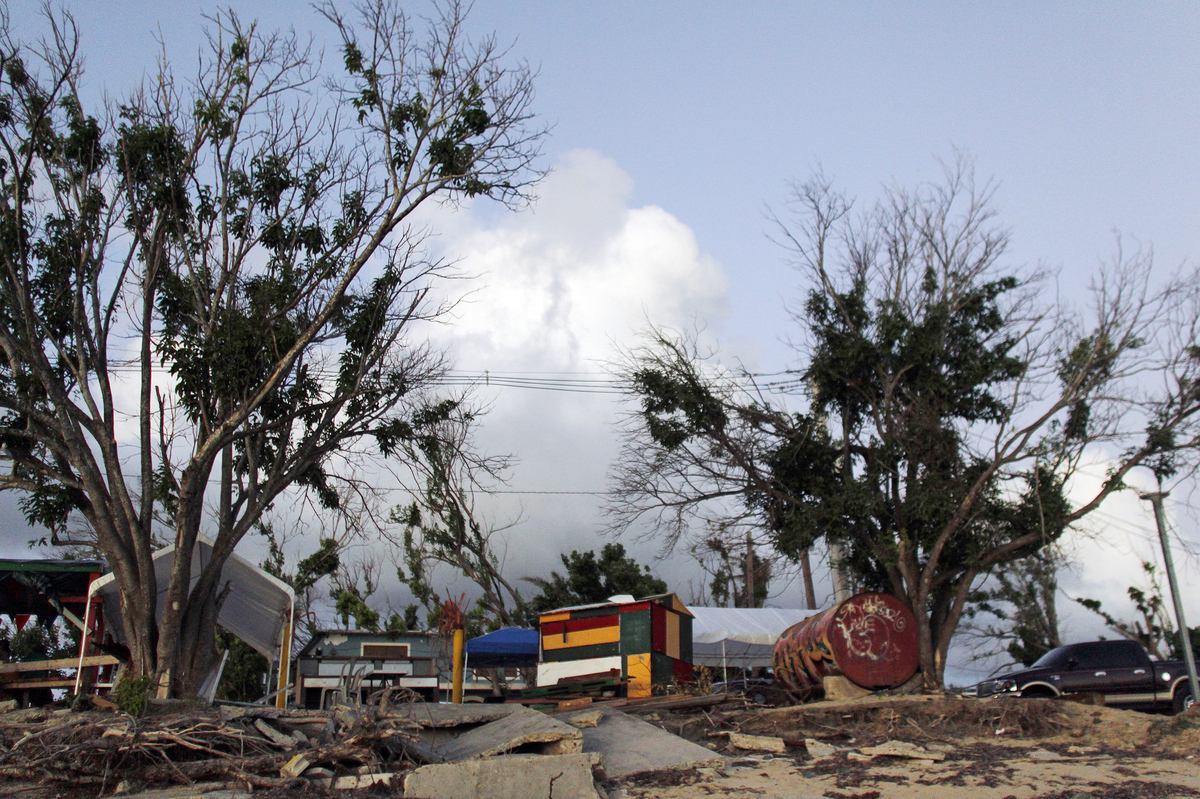 The projects are raising hopes of a future for Vieques that does not rely on Puerto Rico's main grid at all. Mark Martin-Bras, director of community relations and research for The Vieques Conservation and Historical Trust, says the island's future should absolutely be solar power and alternative energy.

It could even be used as a model for how to switch to solar, he says.

"Vieques is a good example and small enough to be a model for [companies] like Tesla who proposed this type of work and other components of alternative energy, that can make this island a model for the world," Martin-Bras says.

Felix, the mayor's spokesperson, says the idea of fully powering Vieques with alternative energy is appealing. It would benefit everyone, removing the need for months-long repair processes like this one. But the truth is, he says, the isolated island just simply doesn't have the money.