Accessibility links
Impeccable 'Phantom Thread' Doesn't Drop A Stitch Paul Thomas Anderson's film about a London dressmaker in the 1950s is "a rare combination of audacity and precision, impeccably tailored yet full of mystery and magic," says critic Scott Tobias. 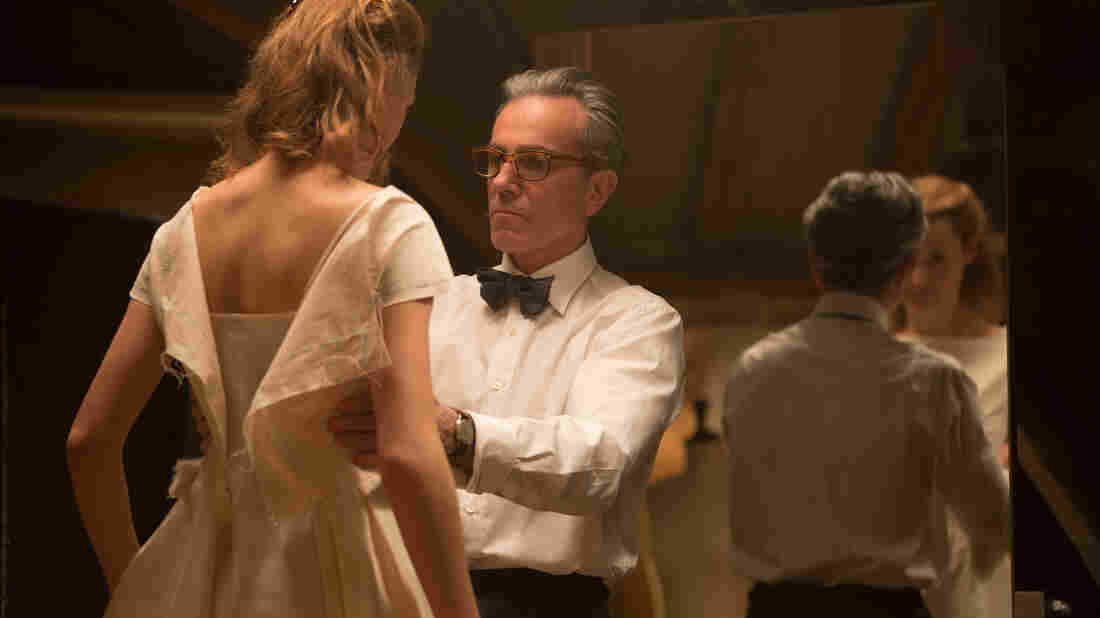 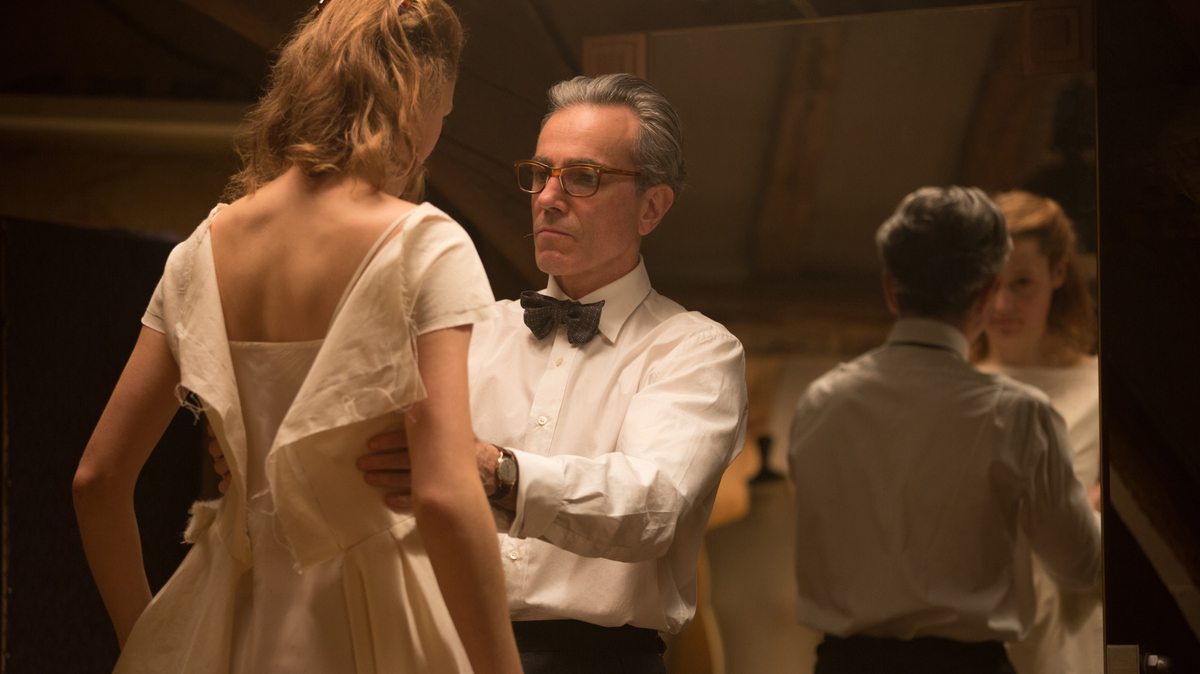 Vicky Krieps as Alma and Daniel Day-Lewis as Reynolds Woodcock in Phantom Thread.

Even the title, Phantom Thread, sets the mind reeling. The term refers to a Victorian Era phenomenon in which East London seamstresses, utterly exhausted by a long day's work, continue to go through the motions at home, sewing threads that do not exist. It also evokes the otherworldly quality of artistic creation, some divine and inexplicable force that helps bring a work to fruition. And therein lies the particular wonder of writer-director Paul Thomas Anderson's beguiling new film about a British dressmaker in the 1950s: It's a rare combination of audacity and precision, impeccably tailored yet full of mystery and magic, like an essential part of it is beyond Anderson's control. Just defining what the film is presents an formidable set of obstacles.

Phantom Thread is a romance of sorts and it's a comedy, too, laced with humor that pings against its brittle surface like a spoon cracking a soft-boiled egg. It's also an unmistakably personal film about an artist whose obsessions have grown narrow and confining, placing limits on his professional growth and his ability to sustain a healthy relationship. There are hints of past Anderson films in the character of Reynolds Woodcock, who's dictatorial and high-strung, like a cross between Daniel Day-Lewis' oil tycoon in There Will Be Blood and Adam Sandler's raging man-child in Punch-Drunk Love. But the taming of this beast requires a new and more delicate kind of chemistry than Anderson has attempted before, and it's a pleasure to watch him discover it.

The name Reynolds Woodcock (Day-Lewis) alone is like a balloon begging to be popped, but the film lets the air out slowly. In the famed Woodcock House in London, he and his devoted sister Cyril (Lesley Manville) manage the flow of clients, models, and seamstresses with the same meticulousness that goes into the dresses themselves. When Reynolds' latest squeeze disrupts his sketching process by making too much noise at the breakfast table, he coldly requests that Cyril "get rid of her" afterwards and she dutifully obliges. Though Anderson doesn't explore the trends of the larger fashion world outside the Woodcock House — aside from Reynolds' delectable rant against the word "chic" — the pressure to stay relevant and fashion-forward is strongly felt, especially for a man who's so stuck in his ways. The debutantes and aristocrats who show off his original creations are fickle in their loyalties.

On a getaway to the country, Reynolds discovers a new muse in Alma (Vicky Krieps), a waitress who's flattered by his attention, but turns out not be as simple and malleable as he anticipated. Reynolds perhaps sees her as raw clay to be molded however he pleases; when Alma frets over her unconventional appearance, for example, she's told that he "likes a little belly." But she asserts herself quietly and insistently as their relationship develops, until finally taking more radical steps to loosen his grip.

There are times when Phantom Thread feels like Anderson ruthlessly interrogating his worst self, a man who can't allow his process to be sullied or compromised by outside agitators or a break in routine. While Reynolds' need to have everything just-so at all times creates a great deal of stress, however, the film is funny and kinky and sensually overwhelming — not the work of an incorrigible fuddy-duddy. Anderson views love as a productive tension between two people who push and pull and challenge each other to bend a little in their direction. It's not a punch-drunk love between Reynolds and Alma, but something more like the rope-a-dope strategy Muhammad Ali used to fell George Foreman in Zaire. Alma parries and dodges against the stronger puncher before she can get the upper hand.

That's not to say, however, that Anderson isn't constantly working toward a higher standard. There's no sign of compromise in his craft, with nary a trace of the shaggy-dog looseness of his last film, the SoCal hippie neo-noir Inherent Vice. Phantom Thread is a Reynolds Woodcock production through and through, with arresting compositions, a carefully integrated piano-and-viola score by Jonny Greenwood, and performances that crackle with wit and verve. Manville wins most of the dark laughs as Cyril, who manages her brother's affairs with withering efficiency, but it's the back-and-forth between Day-Lewis and Krieps that makes the film so mesmerizing. The two are a study in contrasts— him the Method perfectionist in his final role, she the mysterious newcomer who's unplaceable right down to her Luxembourg accent — but they make sense together. Such are the mysteries of the heart.