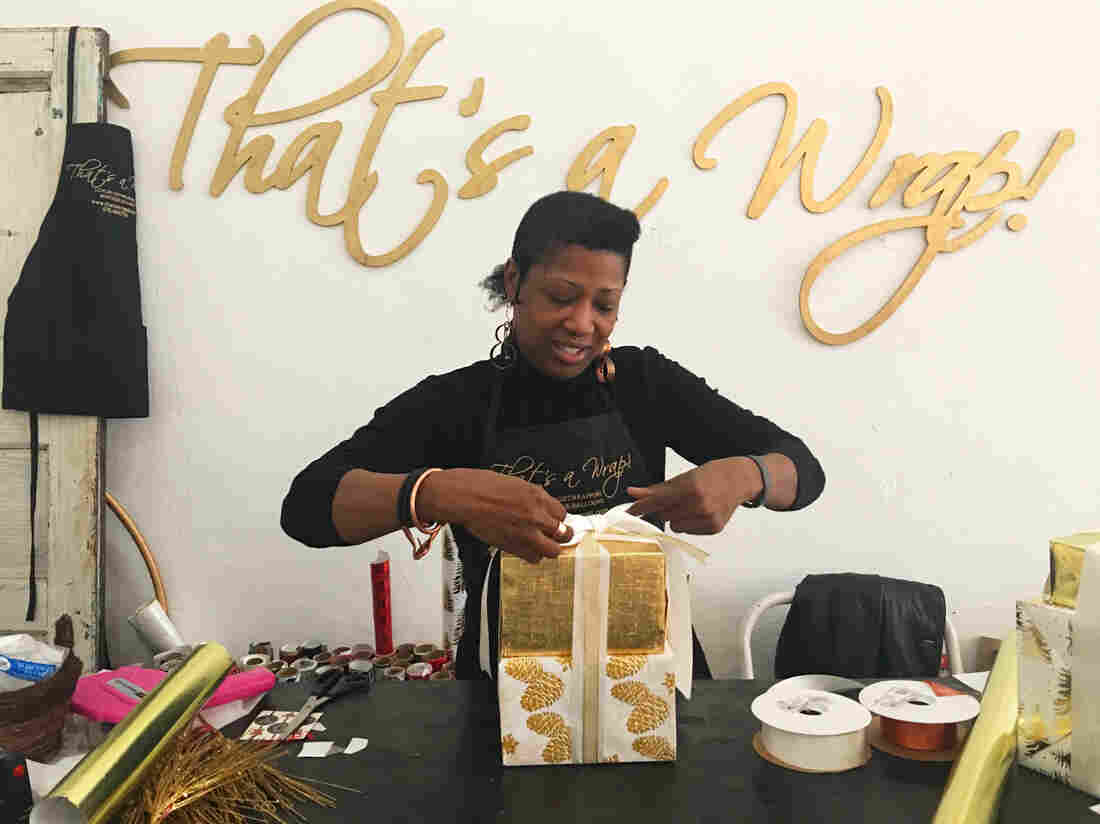 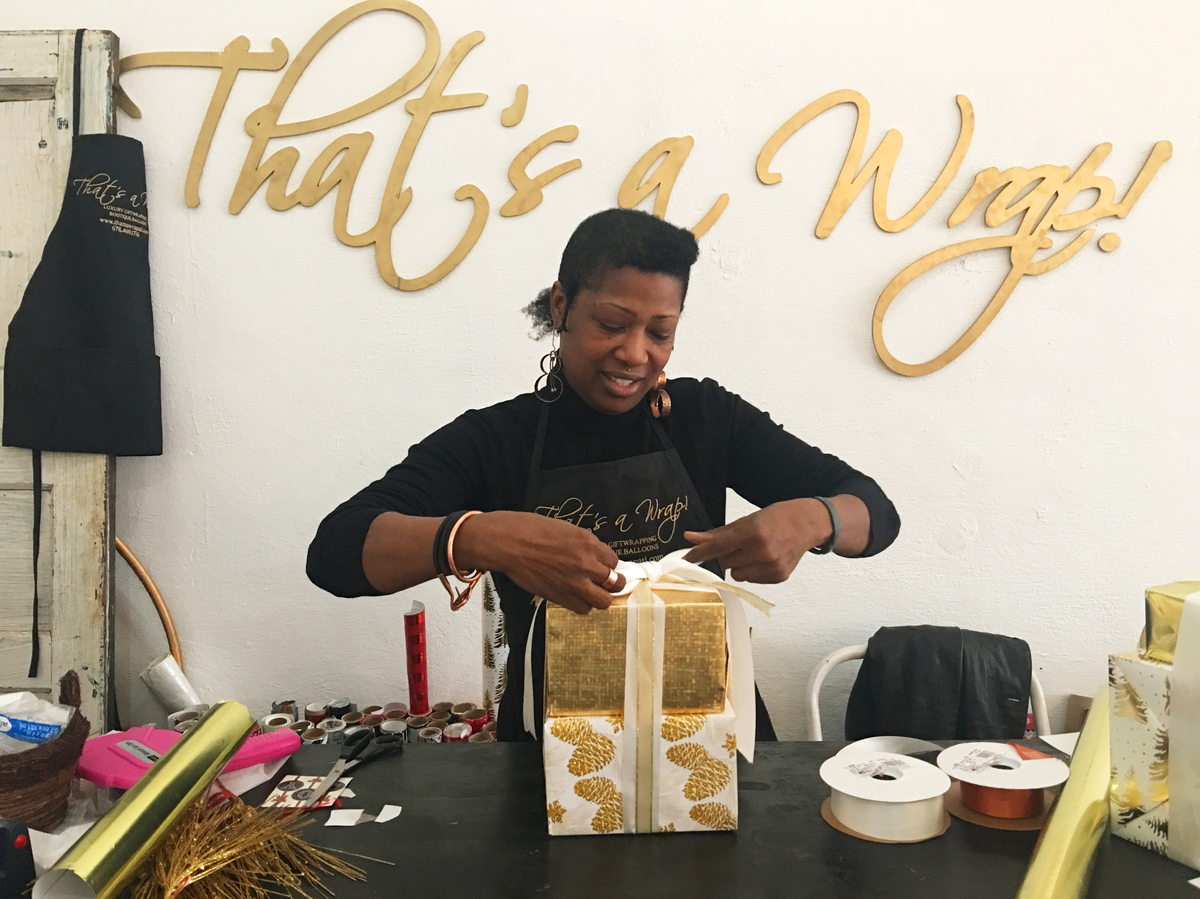 Mia Canada of Atlanta puts the finishing touches on a hand-wrapped gift.

Mia Canada isn't easily intimidated by stacks of naked presents that pile up during the busy holiday season. The owner of a gift-wrapping boutique called That's A Wrap! in Atlanta used to be a gift bag person — but that all changed after a seasonal job wrapping gifts at a mall 12 years ago allowed her to explore the creative side of wrapping presents.

Canada shares a few tips for making holiday wrapping a cinch — even at the eleventh hour.

Instead of thinking of wrapping gifts as a chore, try to find some inspiration in the task. Canada asks her clients how they want the recipient of their gift to feel when they see it. Should they be happy? Should they laugh? Feel nostalgic? For those special gifts, Canada considers the wrapping to be a prelude to the gift itself — setting the expectations and echoing the tone of what's inside. For example, Canada drew inspiration from a bride's dress when wrapping a wedding photo album. She pleated a layer of pearlized damask wrapping paper and added a string of imitation pearl decorations to mimic the bride's veil. 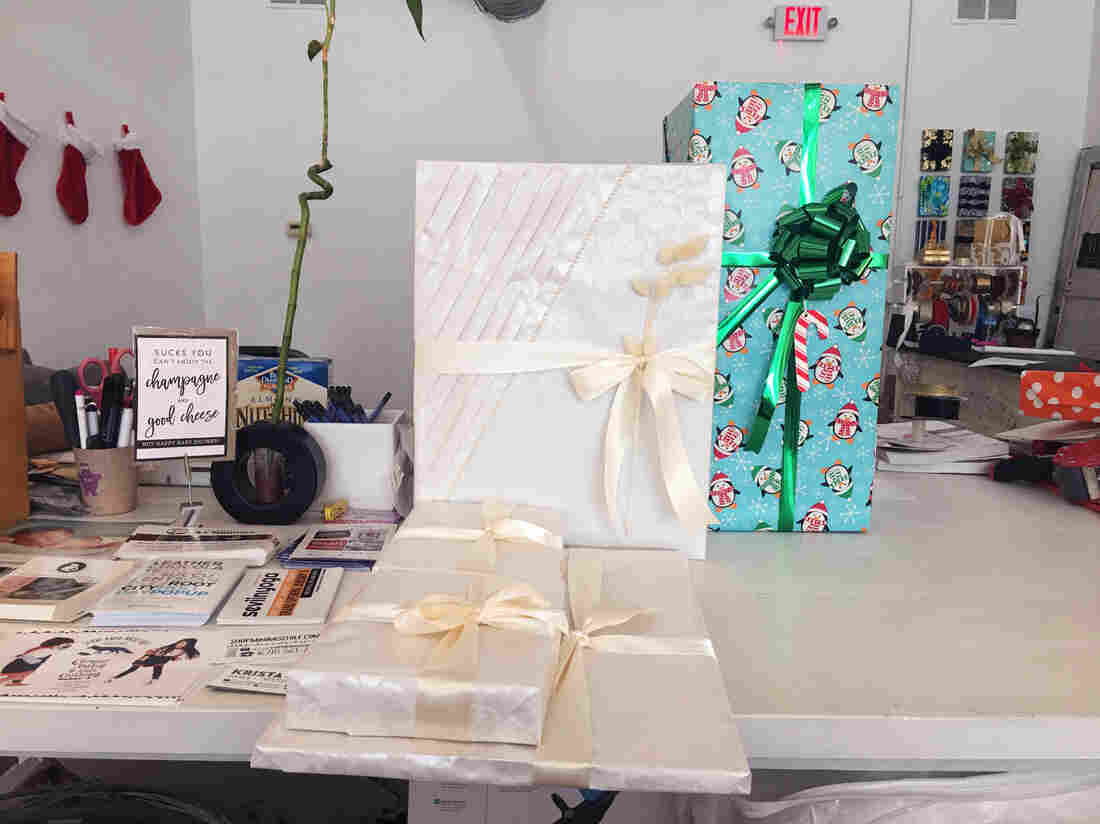 Gifts wrapped by Mia Canada at her boutique in the Kirkwood neighborhood in Atlanta. Emily Ochsenschlager/NPR hide caption

For the little ones, Canada suggests a tried-and-true method that she used when her children were younger: use one type of wrapping paper for each child. The wrapping could be color-coded, or reflect the child's interests. Canada said it helps kids know which gifts belong to whom, and it serves as an easy way to highlight, in wrapping paper form, something that each child loves. If you have a child who loves Hello Kitty, for example, think about using Hello Kitty paper for gifts.

If you're inclined eyeball the amount of paper you'll need and then start folding edges, don't. Line up your gift near the paper's edge on all sides with just enough to make it around the package, and you'll prevent having too much paper to fold. Cut the excess as needed before you tape. It will then be a cinch when it comes to making crisp corners.

This is Canada's favorite tip. She runs her forefinger and thumb over each fold and over every edge several times. She uses the meaty part of her fingers to get that perfect crease. Canada likens it to a custom suit for your presents: "Imagine buying a suit off the rack, and then having one that is specifically made for you."

If tying that perfect puffy bow feels elusive, fear not. Opt for a simple bow and consider placing it slightly off-center for a more modern look. But feel empowered to think outside the bow. Pine cones, evergreen clippings and pine needles can add a seasonal bit of flair to gift wrapping. (Canada said she's used pine needles to make tassels for packages in the past.) Draw inspiration from your surroundings.