Accessibility links
Scientists Are Using IVF To Save Coral Reefs Battered by climate change and pollution, coral reefs are dying off. But in Guam, one group of scientists is trying to revive these tiny animals — with the coral equivalent of IVF. 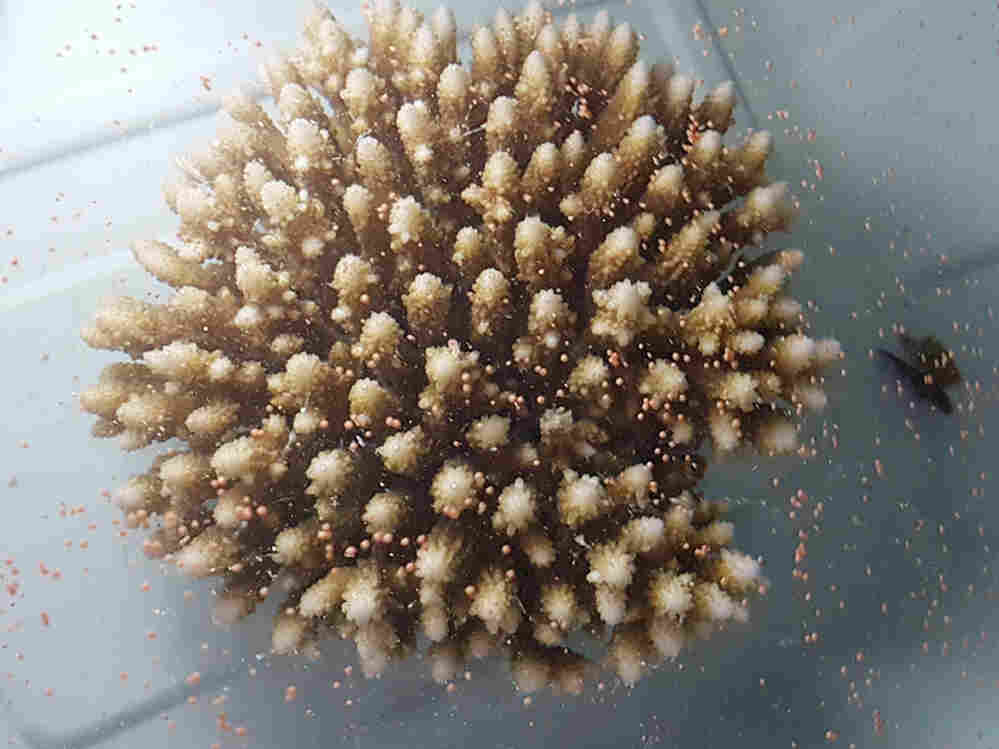 One organization is trying to save dying reefs by fertilizing coral in the lab, like this spawning colony of Acropora digitifera. Mike McCue/Courtesy of SECORE International hide caption 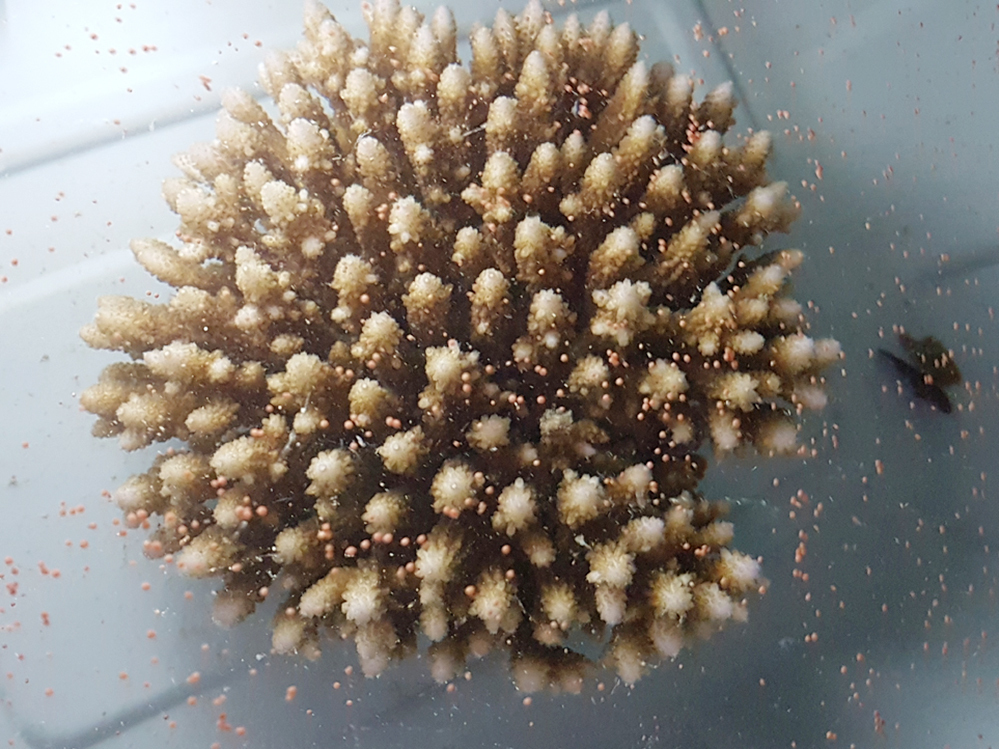 One organization is trying to save dying reefs by fertilizing coral in the lab, like this spawning colony of Acropora digitifera.

A couple hours after sunset, everyone is donning a wetsuit. In minutes, 15 to 20 dark figures are standing in a graveyard on the west coast of Guam. But they're not here for the tombstones. They've come to help rescue something from dying in the waters nearby — the corals.

Corals along Guam's coastlines have been dying in recent years, and they're not alone. Warming seawater and increasing ocean acidity are damaging reef ecosystems around the world. Some scientists and environmentalists fear a worldwide collapse by 2050.

The coral reefs we see are actually colonies of millions of tiny animals. In a single night, the corals cast a fog of sperm and eggs into the water, some of which fertilize to make baby coral larvae. And some of those larvae settle back onto the reef, making it grow.

Petersen is the founder and executive director of SECORE, short for sexual coral reproduction. His mission is to gather sperm and eggs from the corals, fertilize them in the lab and return the baby corals to the wild. 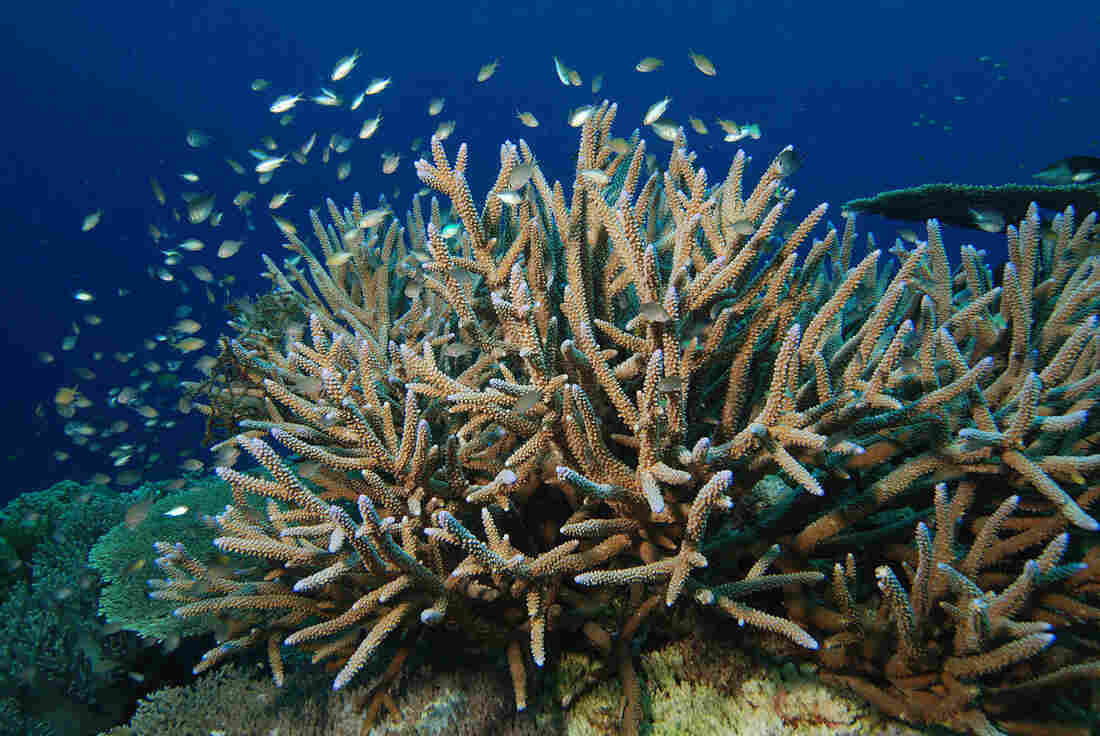 Corals around the world have been dying because of warming waters and pollution. Some researchers hope they can reverse the trend by growing new corals in the lab. Albert Kok/Wikimedia Commons hide caption 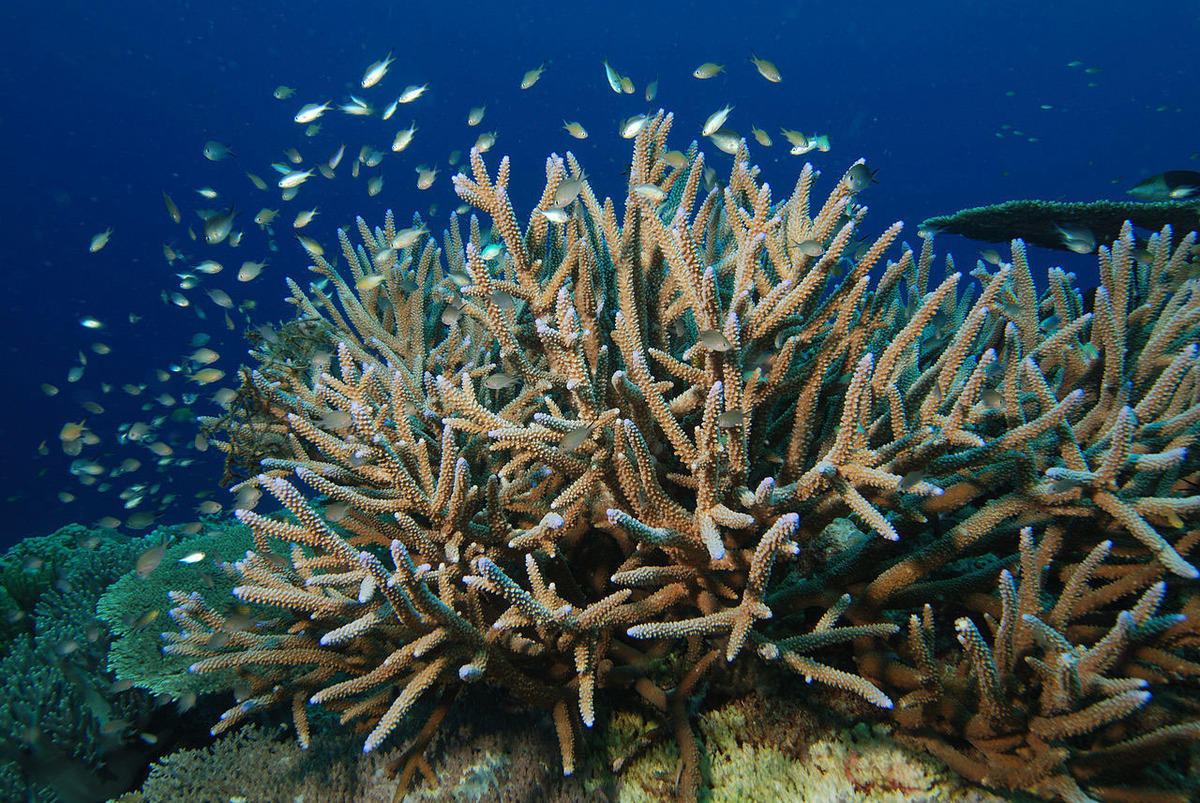 Corals around the world have been dying because of warming waters and pollution. Some researchers hope they can reverse the trend by growing new corals in the lab.

The team divvies up the collection containers and heads to the beach. Everyone adjusts their snorkels, sharing lights so they can see what they're doing. They wade out into the water.

"It's just a constant safari," says Richard Ross, a biologist with the California Academy of Sciences. "You hope you're going to see the corals spawning. And you never know if it's even going to happen."

Ross and the others are focusing their efforts on this night on staghorn corals, a species that forms thickets of branching antlers. The staghorn corals have been hit hard in Guam by four years of bleaching and one episode of extremely low tides, not to mention soil runoff and heavy fishing.

"A bunch of us coral reef managers were just so sick of just watching things die," says Laurie Raymundo, a biologist at the University of Guam. "And [we] really felt we want[ed] to start doing something — restore, rehabilitate — those are technical terms. The emotional terms are: 'Let's just see if we can watch something live for once.' "

This is in large part why SECORE is here. The group got its start in the Caribbean, and it has come to the Pacific to teach others its technique to restore reefs. The method depends entirely on spawn. Al Licuanan of De La Salle University in the Philippines is eagerly eyeing the water for any sign of it. He explains, "It's been described like an upside-down rain of yellow, blue, pink. You find this foamlike muck."

At last, the spawning happens. A thick speckling of little white dots are swirling everywhere. This is the future of the reef.

There is just one problem ­— it's the wrong species. The spawn is from the big Porites boulder corals, and the team doesn't have the right equipment to collect it.

Petersen admits defeat. "Patience," he says. "Tomorrow is another night."

The next night, they bring the right equipment, but there is not enough spawning. The following night, they try a different location, but again, there is just not enough material to collect. The spawning window has closed. It's part of what makes the work so difficult.

A couple days later, a fiery sunset lights up the sky on the west coast of Guam. Nicole Burns, a graduate student at the University of Guam, kicks her way down to a coral nursery 1,200 feet from shore. When she surfaces, she is holding a cement pyramid in her hand with a staghorn the size of a crouton growing on its surface.

This baby is 2 years old and came from spawn collected at sea and fertilized onshore. It has been growing in the nursery ever since, cared for by Burns and others.

"We tend to them," Burns says. "Once they're big enough, then you plant them out to be in nature and in the wild."

The next day, this baby will be placed on a reef farther up the coast, which is where everyone is hoping it'll grow up to stand guard against an uncertain future.