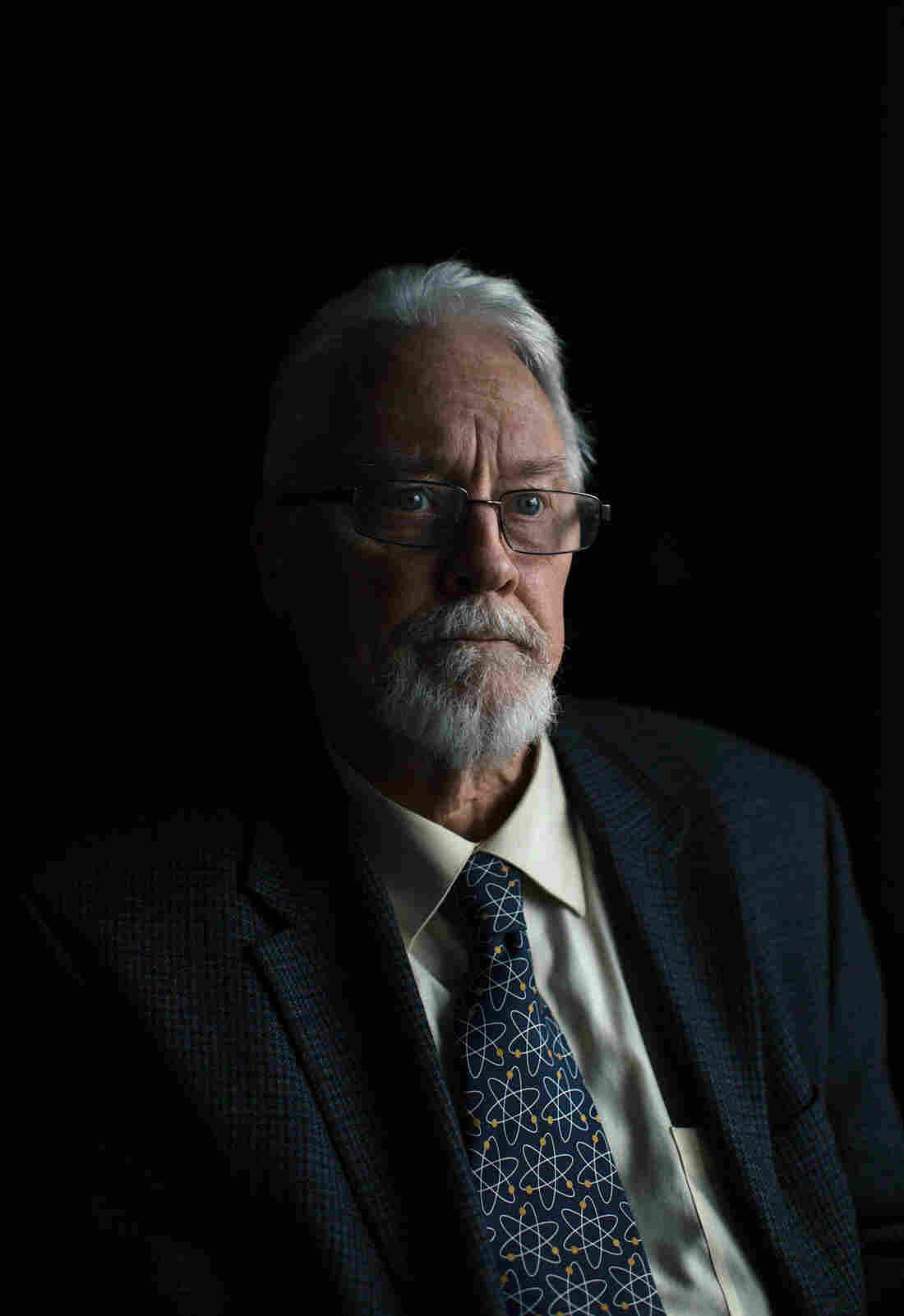 John Coster-Mullen has reverse-engineered America's first nuclear weapons and has self-published a book on his findings. Meredith Rizzo/NPR hide caption 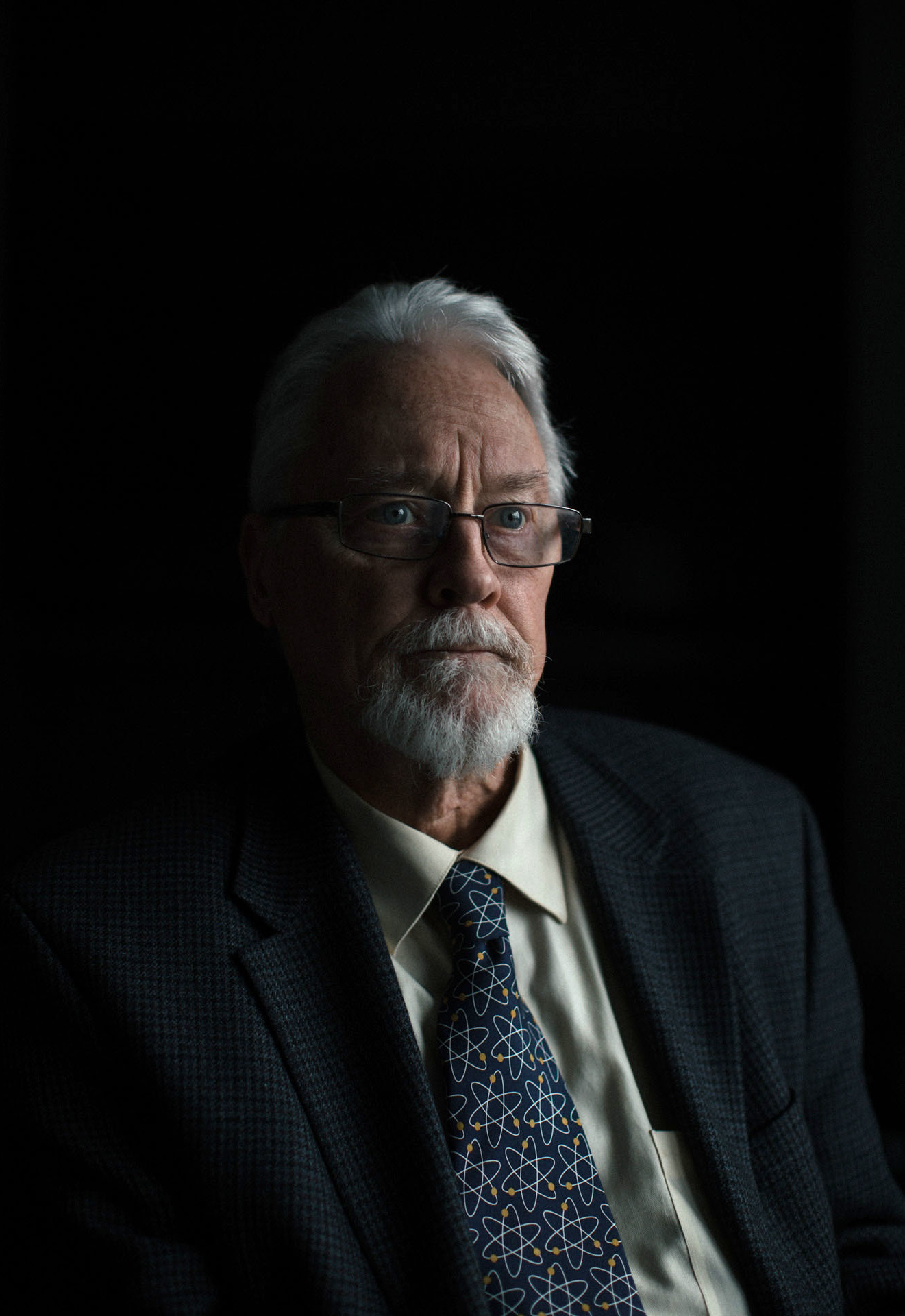 John Coster-Mullen has reverse-engineered America's first nuclear weapons and has self-published a book on his findings.

This year, deep inside a mountain, North Korea detonated a giant nuclear bomb.

The weapon was powerful; at least 10 times more destructive than the bomb the U.S. dropped on Hiroshima at the end of World War II. The North claimed it was an advanced, thermonuclear design. The test came just months after a report that some intelligence officials believed North Korea had successfully "miniaturized" some of its nukes in order to fit them on top of missiles.

The apparently rapid progress alarmed politicians and pundits, and it worried average Americans, many of whom hadn't thought much about nuclear weapons since the end of the Cold War.

But a 71-year-old truck driver named John Coster-Mullen wasn't surprised. Nuclear weapons are not particularly "hard" to design and build, he says. "Compared to what they do in manufacturing today for making a light bulb, these are simple. They really are," he says.

Coster-Mullen is an unlikely judge of North Korea's nuclear progress. He works nights for a major trucking firm, delivering merchandise to big box stores. Before that, he worked as a photographer. He never graduated from college.

But for the past 24 years, he has had an extraordinary hobby. He has carefully re-created detailed designs of America's very first nuclear weapons: Little Boy, the bomb that was dropped on Hiroshima, and Fat Man, the one that fell on Nagasaki. 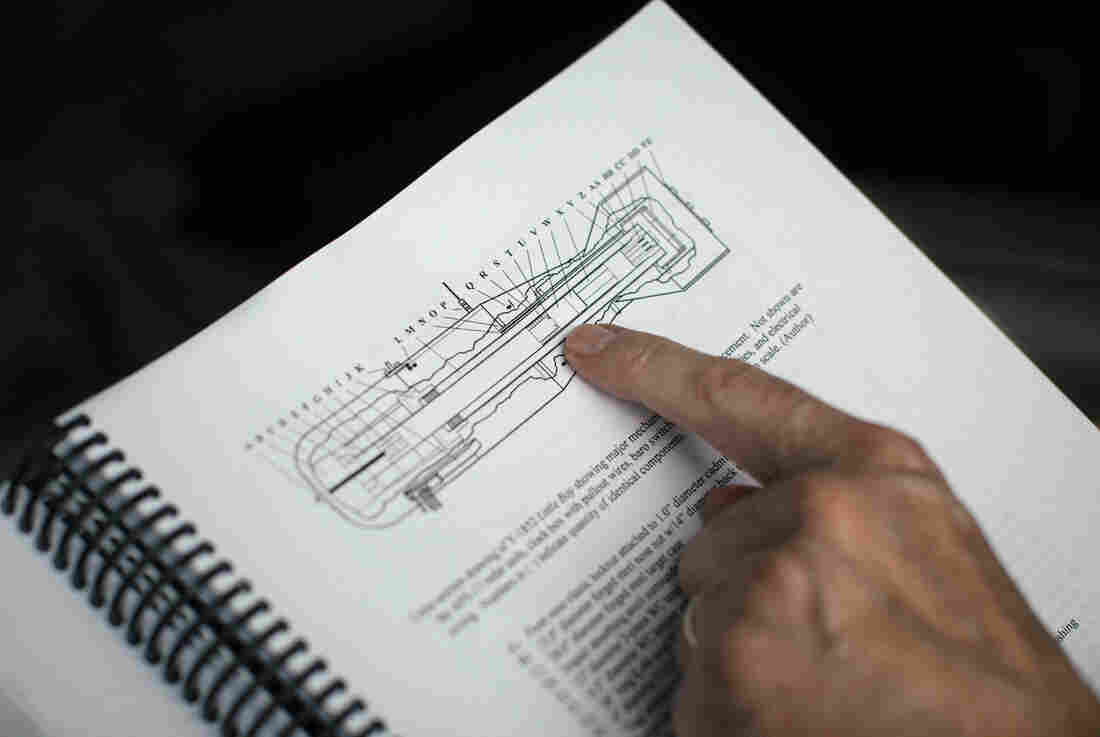 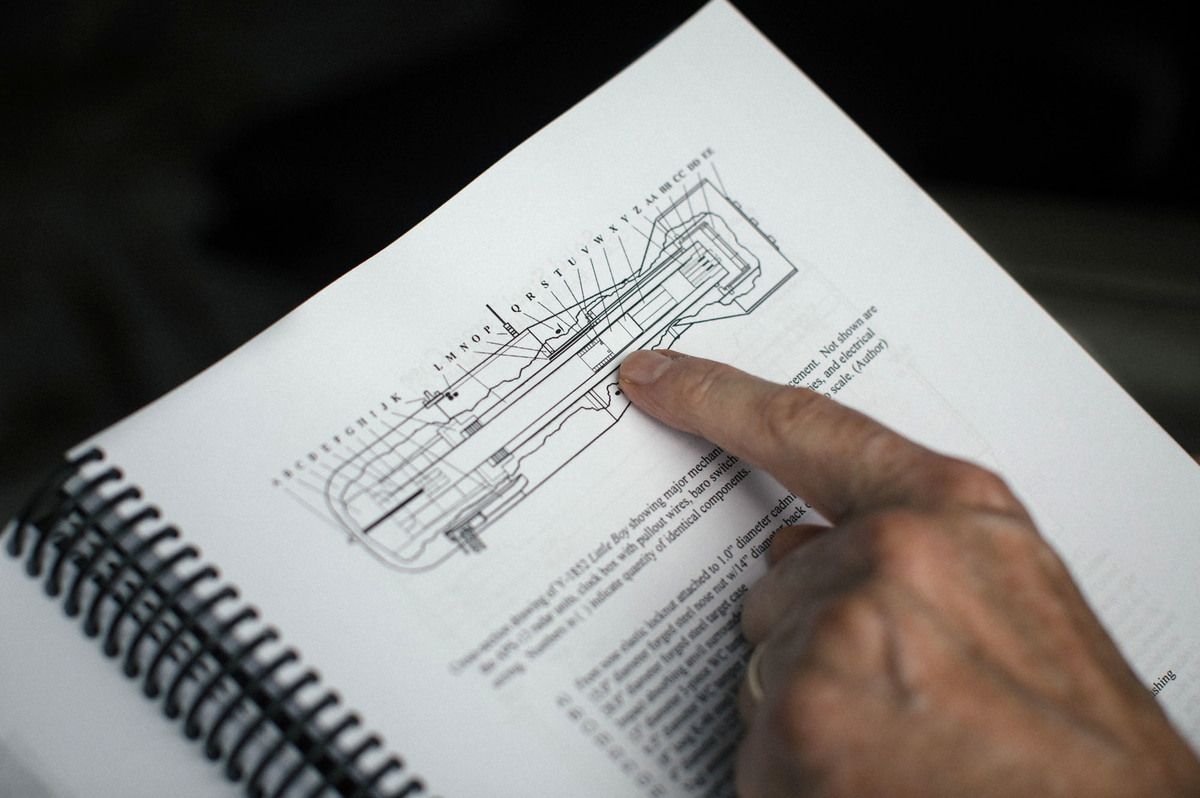 The self-published Atom Bombs: The Top Secret Inside Story of Little Boy and Fat Man compiles research, drawings and archival photos of the Fat Man and Little Boy bombs.

On the day we meet, Coster-Mullen is wearing a rumpled suit jacket with a patterned atomic tie. His unbroken way of speaking is cluttered with minute details of the bomb: The threading on Little Boy's nose cone (it was two threads per inch); the gold foil used at the center of the Fat Man design (physicists debated for hours about how many thin sheets to use).

It would be easy to write him off as an eccentric, but experts do not. "He knows a lot," says Johnpierre Paglione, a physics professor at the University of Maryland who recently invited Coster-Mullen to give a lecture about the bomb as part of his class on the Manhattan Project.

"The impressive thing about the work, to me, is how much information he was able to curate over time," says Jeffrey Lewis, a scholar at the Middlebury Institute of International Studies at Monterey.

It all began in 1993 with a scheme to make a little money.

"The 50th anniversary of the bombs was coming up, and I thought I could make little replicas of the bombs and sell them," Coster-Mullen recalls.

To him it made sense. He'd grown up at the dawn of the Atomic Age and loved making models. He figured some like-minded baby boomer might buy them. Some companies were already making models of the bombs, but Coster-Mullen noticed their versions contained small errors in the tail design and elsewhere. He thought he could do better.

"I'm a perfectionist. I want everything where it should be," he says. 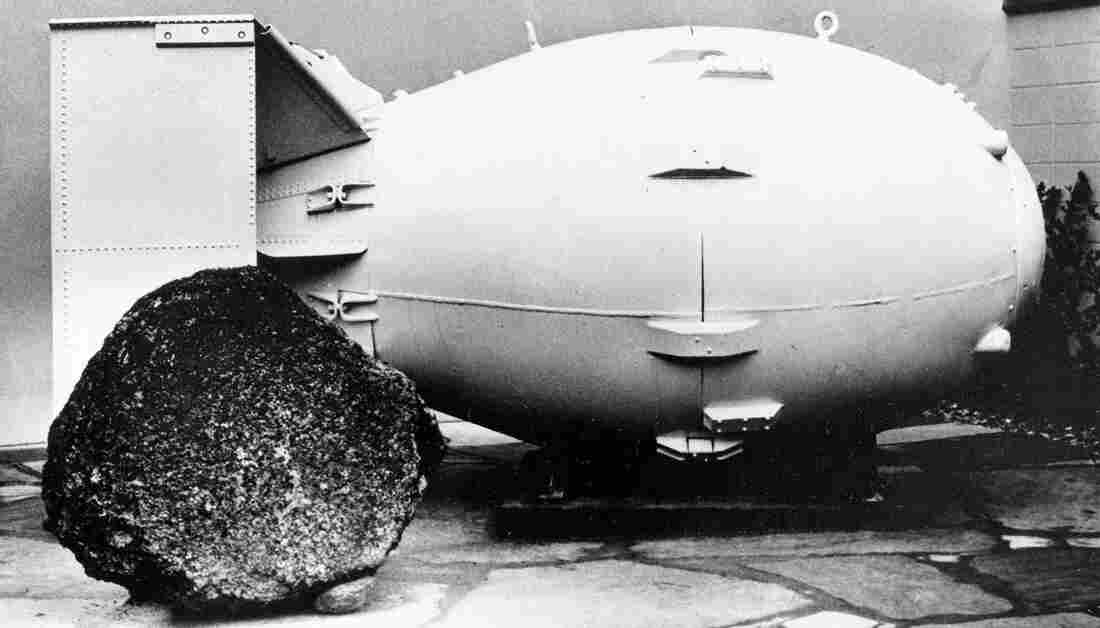 A 1965 image shows a replica of a Fat Man nuclear bomb, the type dropped on Nagasaki, Japan, in 1945, on view for the public in Los Alamos, N.M. AP hide caption 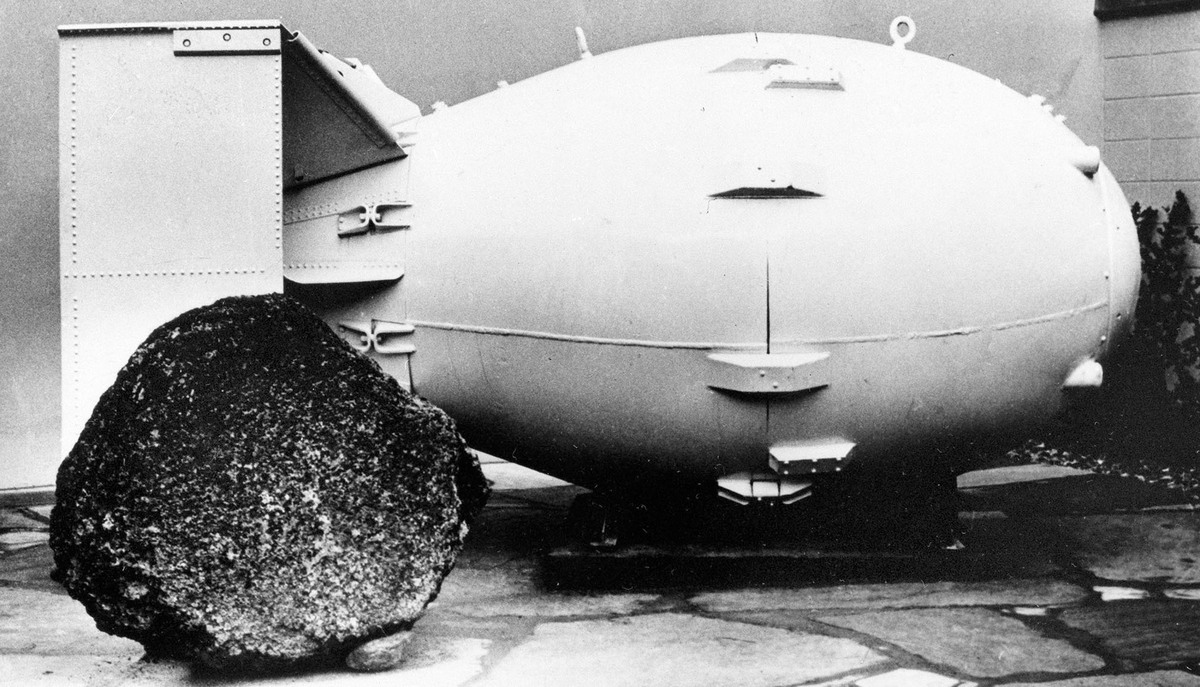 A 1965 image shows a replica of a Fat Man nuclear bomb, the type dropped on Nagasaki, Japan, in 1945, on view for the public in Los Alamos, N.M.

To make his models, he drove 1,300 miles to Los Alamos, N.M., the birthplace of the atomic bombs. The museum there has accurate, full-scale replicas of Little Boy and Fat Man that he could work from. As he designed his models, he decided he'd write a brochure to go with them.

Coster-Mullen never sold a single model, but he has been adding to his bomb brochure ever since, building up what are basically complete specs for America's first nuclear weapons. He has traveled the country, and the world, to glean all sorts of supposedly secret details.

"Nobody leaked anything to me,"he says. "I found all this information was hiding in plain sight."

Like the time he went to a lecture by someone who'd worked on the development of the bombs. At the end of the talk, the man held up a special commemorative paperweight, which had been made using a mold. "The mold they poured the plastic into was the same mold they poured the plutonium into to make the cores," says Coster-Mullen. The paperweight was a perfect copy of one hemisphere of a Fat Man-type bomb's nuclear core.

Coster-Mullen ran up after the lecture, made a few quick measurements and got what was once highly classified information. 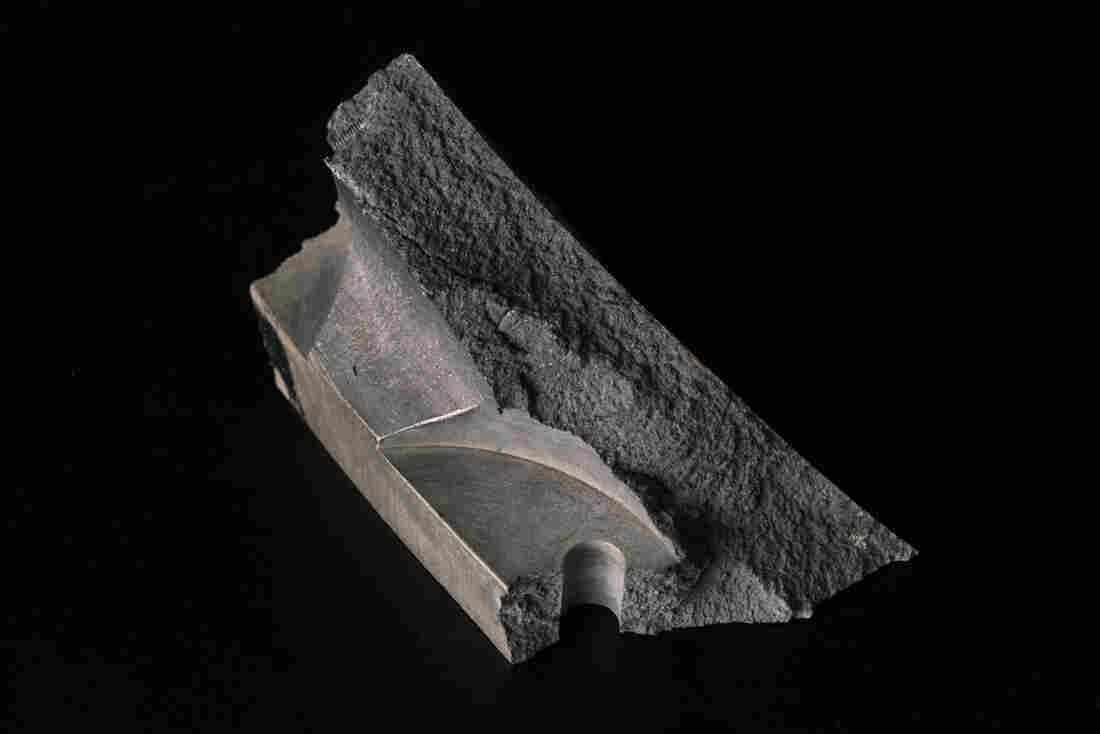 On private land in the western U.S., Coster-Mullen found this fragment of what he believes is bomb casing from a test version of the Fat Man design. Meredith Rizzo/NPR hide caption 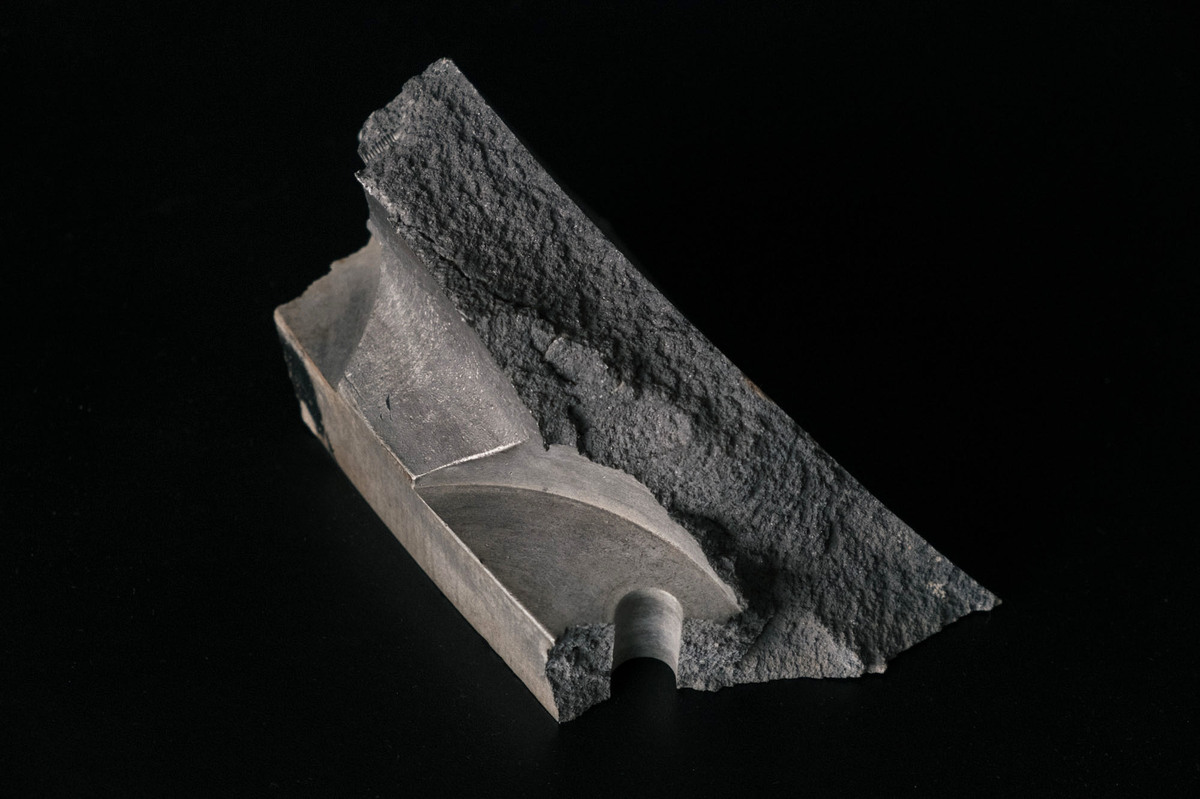 On private land in the western U.S., Coster-Mullen found this fragment of what he believes is bomb casing from a test version of the Fat Man design.

He also spends a lot of time poring over declassified photographs and documents and thinking about how the pieces they describe fit together. "I've had a lot of those 'Ah ha!' moments where it suddenly hits you," he says.

Coster-Mullen lives for those "Ah ha!" moments, and they've added up to a very complete diagram of each bomb. I tried to contact several former nuclear weapons designers about the accuracy of his work. None of them wanted to comment publicly on it.

But Alex Wellerstein, a historian at the Stevens Institute of Technology who specializes in nuclear weapons, says Coster-Mullen's work is the "gold standard." "His view of how the bombs worked is the most compelling I've seen," Wellerstein wrote in an email.

Lewis says Coster-Mullen's odyssey shows that nuclear weapons just aren't that hard to understand. "If a truck driver from Milwaukee can roughly replicate one, then that tells you that there is nothing mysterious about them," Lewis says.

"Anyone who thinks that ignorance is going to be an effective prohibition on a small nation attaining nuclear weapons should take heed of John's work," agrees Wellerstein. "There's more information out there than most people realize. And it has been out there for a long time."

In fact, many small nations have put together nuclear weapons designs over the years. In the 1940s and 1950s, Sweden had a bomb program that produced a complex design, Lewis says. Australia also is believed to have worked on a weapon design, as did Iraq under Saddam Hussein.

The real challenge is getting the uranium or plutonium needed to make the design a reality. "The hard part is creating the nuclear fuel. That requires a nation-state," Coster-Mullen says.

For all its limitations, North Korea is such a state. It has the reactors and centrifuges needed to make bomb-grade fuel.

In the end, Lewis says, the only way to halt North Korea's progress may be to somehow convince the country's leaders that it's in their best interest to stop it themselves. That seems to have worked in the case of Iran, where a nuclear program was frozen in exchange for sanctions relief and other financial incentives.

North Korea, which has already developed nuclear weapons, is a considerably more difficult case, Lewis concedes. But if nothing is done, he expects their progress to continue apace.

"I think we watch too many superhero movies; we imagine that we can physically prevent people from doing this," Lewis says. "But it is so easy."