Accessibility links
After Drug Treatment, Men In Recovery Work To Live A 'Normal Life' For NPR's "Kitchen Table" series exploring issues from the 2016 presidential campaign, we revisit Huntington, W.Va., and follow up with three men in recovery from opioid addiction.

As the opioid crisis continued to plague communities across the country, this year. several states have joined a handful of others in declaring opioid emergencies. President Trump recently labeled the crisis a national public "health emergency." That drew attention to the issue, but did not come with any new funding.

Earlier this year as part of our Kitchen Table series, we met three men who were near the end of their residential treatment program for opioid addiction in Huntington, W. Va.: Terry Lilly, Jarrod Book, and Aaron Pardue.

In West Virginia, Men In Recovery Look To Trump For A 'Helping Hand'

When we first met Jarrod Book, Aaron Pardue and Terry Lilly, they were getting ready to begin navigating normal life in one of the hardest-hit cities by the epidemic, in the state that has led the nation in deaths related to abuse of opioids like heroin and prescription drugs.

Matt Boggs also graduated from the Recovery Point treatment program several years ago; he's now the executive director and worked with all three men. In addition to the work of staying drug-free, Boggs says leaving treatment poses a range of challenges, from finding housing and employment to getting adequate healthcare.

"There can be a lot of temptation: stress, anxiety, financial responsibilities, legal responsibilities – all of those can be really shaky ground for people early in recovery," Boggs says. "But hopefully what we've provided them is the tools of how to deal with that." 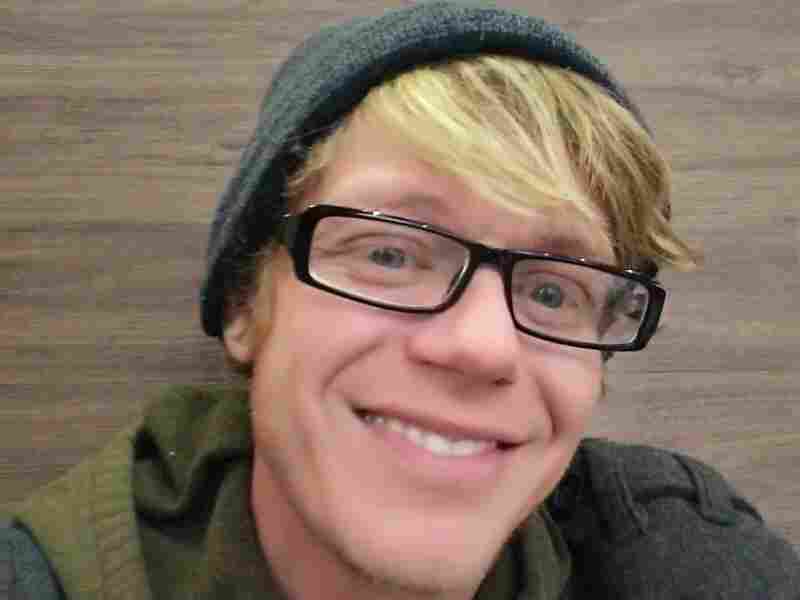 Terry Lilly, 38, says he's trying to do what he learned in treatment – take one day at a time. Courtesy Terry Lilly hide caption 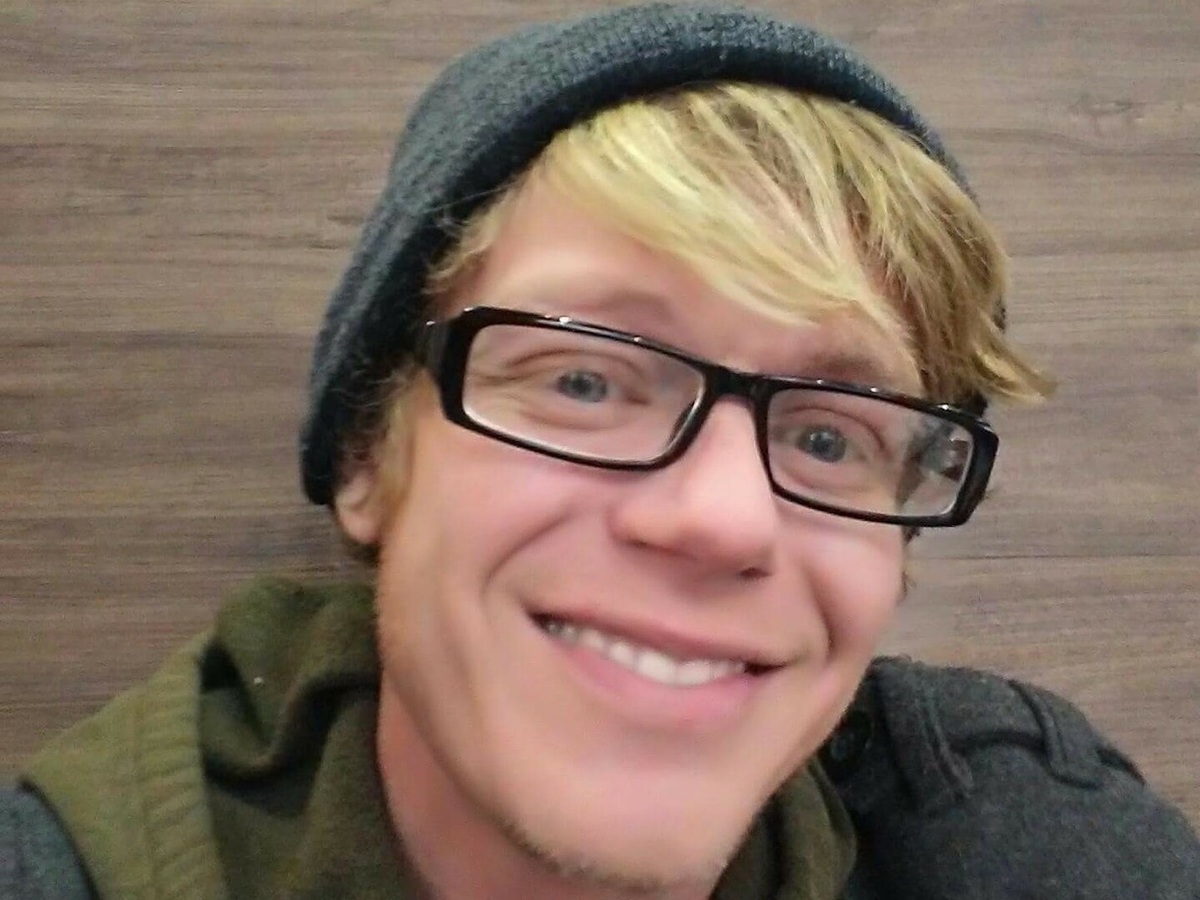 Terry Lilly, 38, says he's trying to do what he learned in treatment – take one day at a time.

Standing outside his apartment in a quiet, working-class neighborhood, Terry Lilly says life on his own is good, but challenging. At 38, he's trying to rebuild his life.

"I'm starting from scratch in a lot of different areas, and it's overwhelming," Lilly says.

One of the hardest parts of being in recovery, Lilly says, is the memory of what it's like to get a little bit of money together and buy enough heroin to forget his problems – for a few hours.

"Now, you put in the grind– you go to work, and you may work hard – and then you pay rent and your utility bills, and you don't have much left over for fun or frivolity or whatever," he says. "So the payoff is different."

Lilly says he's trying to do what he learned in treatment – take one day at a time. He's working at a call center and going to regular support group meetings for people in recovery. His chief goal is simple, and intangible: "If I can obtain contentment, that's my long-term success."

Learning to live a normal life 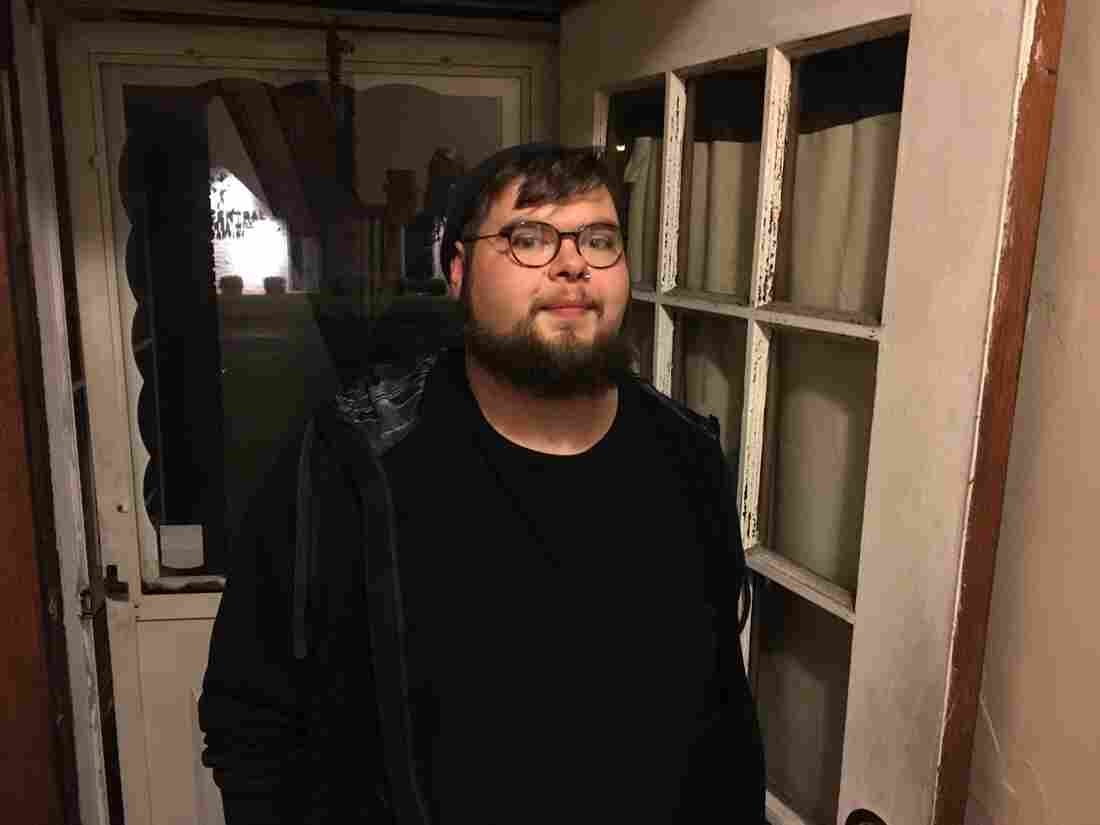 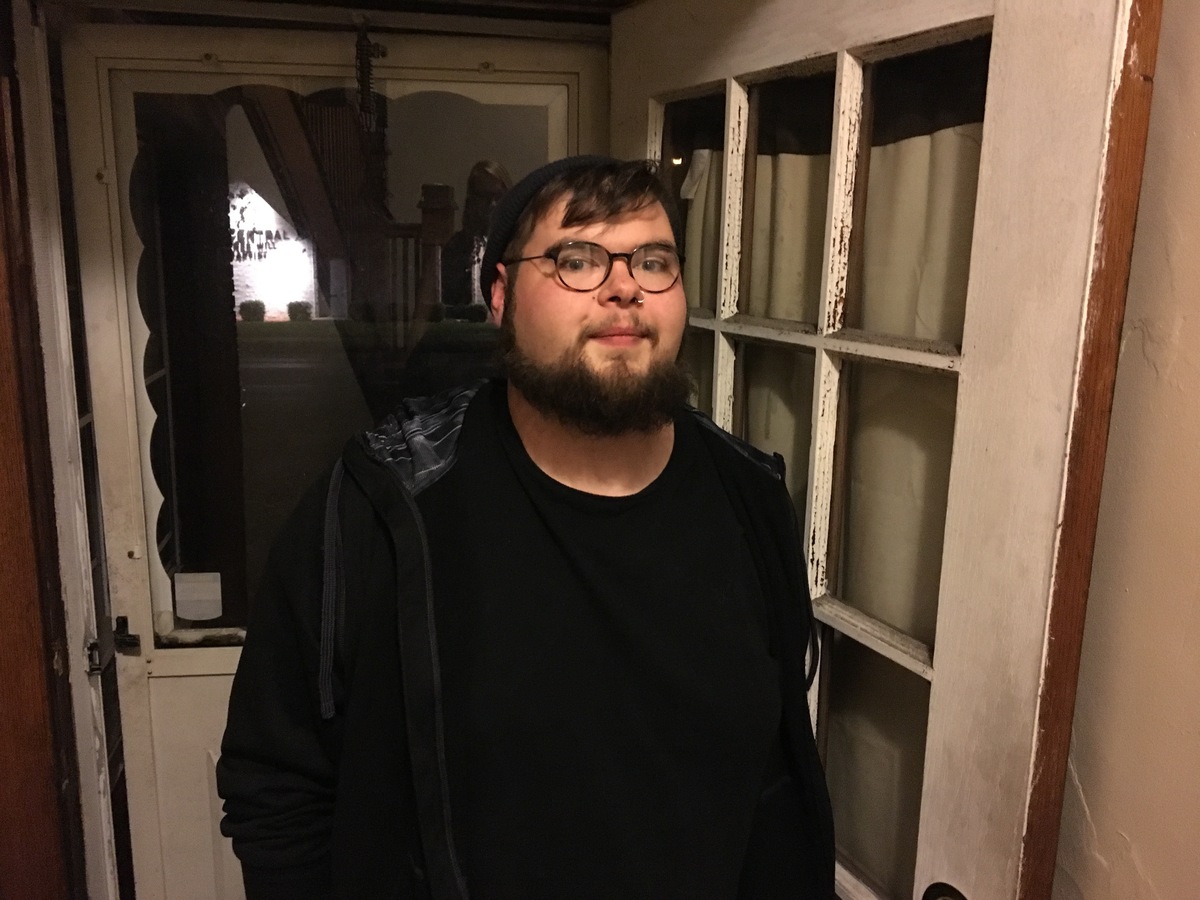 Jarrod Book, 25, at his apartment in Huntington.

Across town, Jarrod Book lives with a couple of roommates – and their pet python. Book, 25, is working as a case manager for a drug treatment facility just across the border in Ohio. He says he finds the work fulfilling.

"I like to be able to give back what people gave to me, and show people that it can be done," Book says. "This is a major problem, and the only way we're gonna get through it is to help each other."

Because his substance abuse started before he was in high school, Book says he's now learning how to do normal adult things for the first time, like paying bills.

"It was always whatever money I had went to fuel my addiction," Book says. "So now, like learning how to budget has been hard. But it's getting better."

Book says he gets a lot of support from his roommates, who are also in recovery, and his family. He says that's helped him stay clean since graduating from Recovery Point. 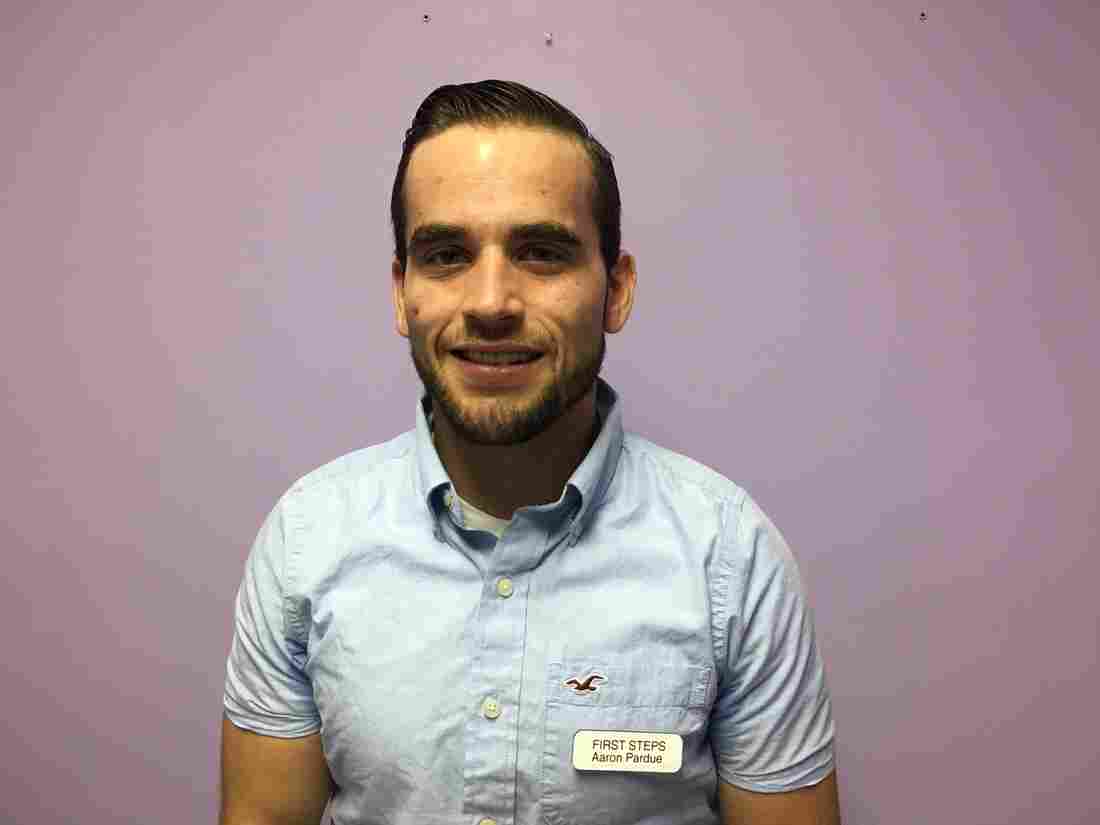 Aaron Pardue, 29, at his office in Huntington. He works as a peer coach for people in recovery. Sarah McCammon/NPR hide caption 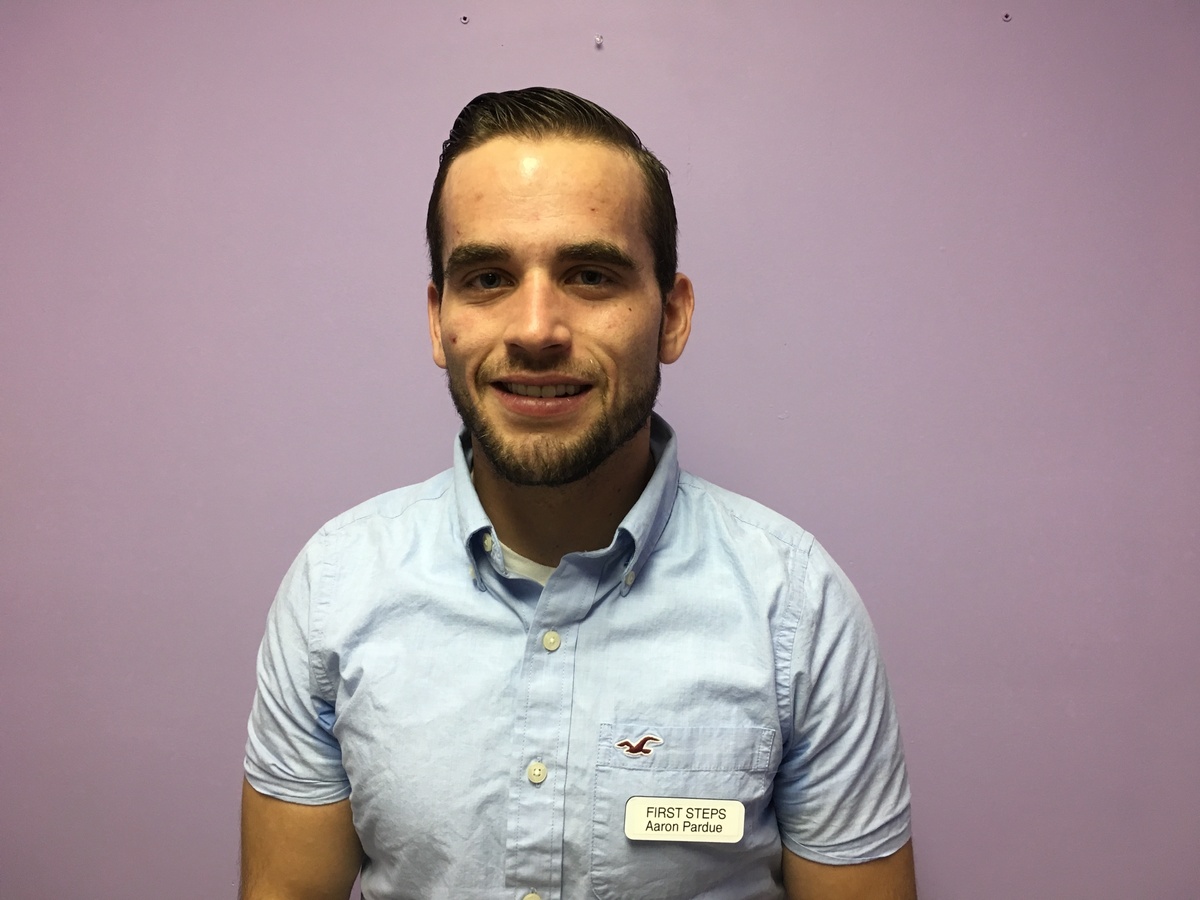 Aaron Pardue, 29, at his office in Huntington. He works as a peer coach for people in recovery.

Another graduate, Aaron Pardue, 29, is also working full-time in the addiction treatment field as a recovery coach for people on probation and parole. His office is at a homeless drop-in center in Huntington.

Pardue says he's grateful he found full-time work despite his history of drug abuse and jail time; some of his clients aren't so lucky.

"It's the hardest thing in the world to see somebody get sober, turn their complete life around and then come back out here to a society to where they can't get a job," he says. "...How many years do you have to pay for something you've committed in the past?"

He sees clients who come in ready to seek treatment, but there's nowhere to send them.

"You see it in their eyes. They're completely broken down, they're crying, and you can't make it happen because there's no beds, there's no place to send 'em," Pardue says. "And you have to send them back out that door. And once you send them out that door, you don't know if they're gonna be back."

All three men say they're glad President Trump and other leaders have focused attention on the opioid epidemic, but they want more action.

Lilly says he heard about Trump's declaration of an opioid emergency, but he's still waiting to see change.

"It's great, as far as a sound-byte, if he wants to say that that's something he's accomplished or put that in his resume or whatever, that's great," Lilly says. "But I'm personally not aware of what that has translated to.

Lilly and the others say they're thinking less about what's happening in Washington these days, than about getting up each morning in Huntington and staying clean.