Accessibility links
In The Wake Of #MeToo, More Victims Seek Help For Repressed Trauma Some local rape crisis centers and national hotlines that help victims of sexual harassment and assault are reporting a flood of calls at what is usually a slower time of year. 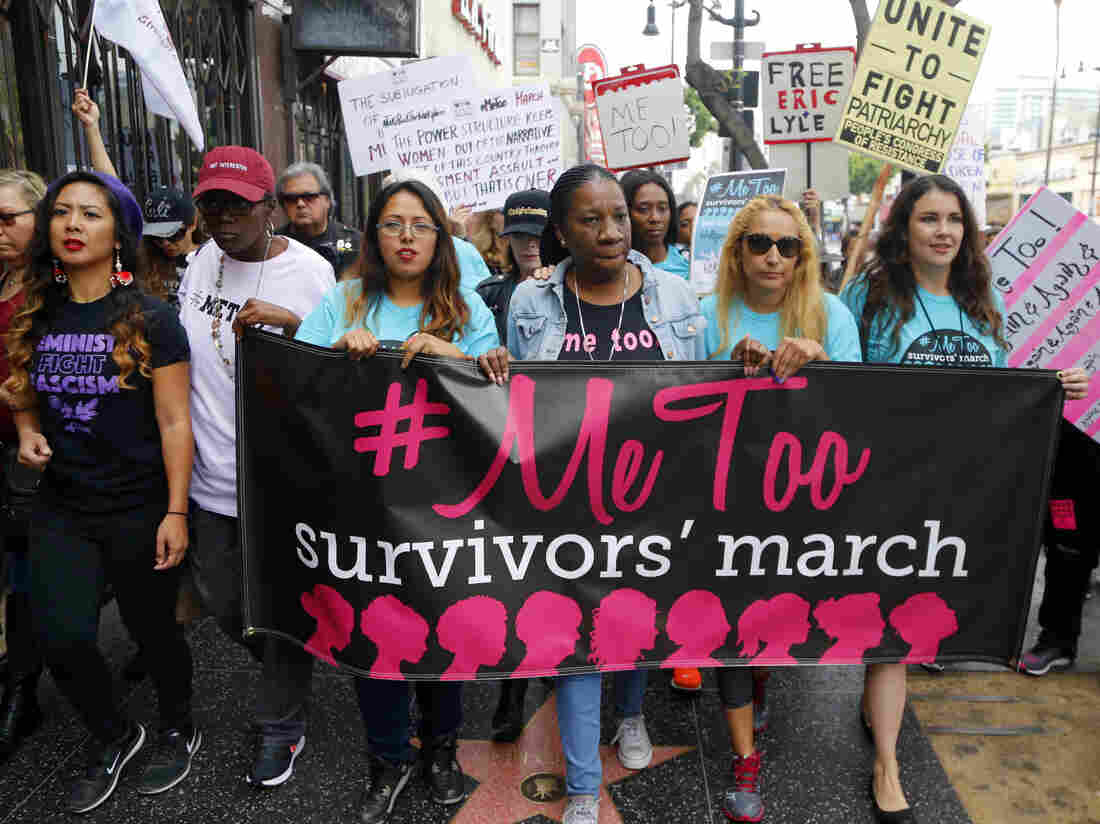 In the wake of the "Me Too" movement, more victims of sexual harassment and assault continue to come forward. Damian Dovarganes/AP hide caption 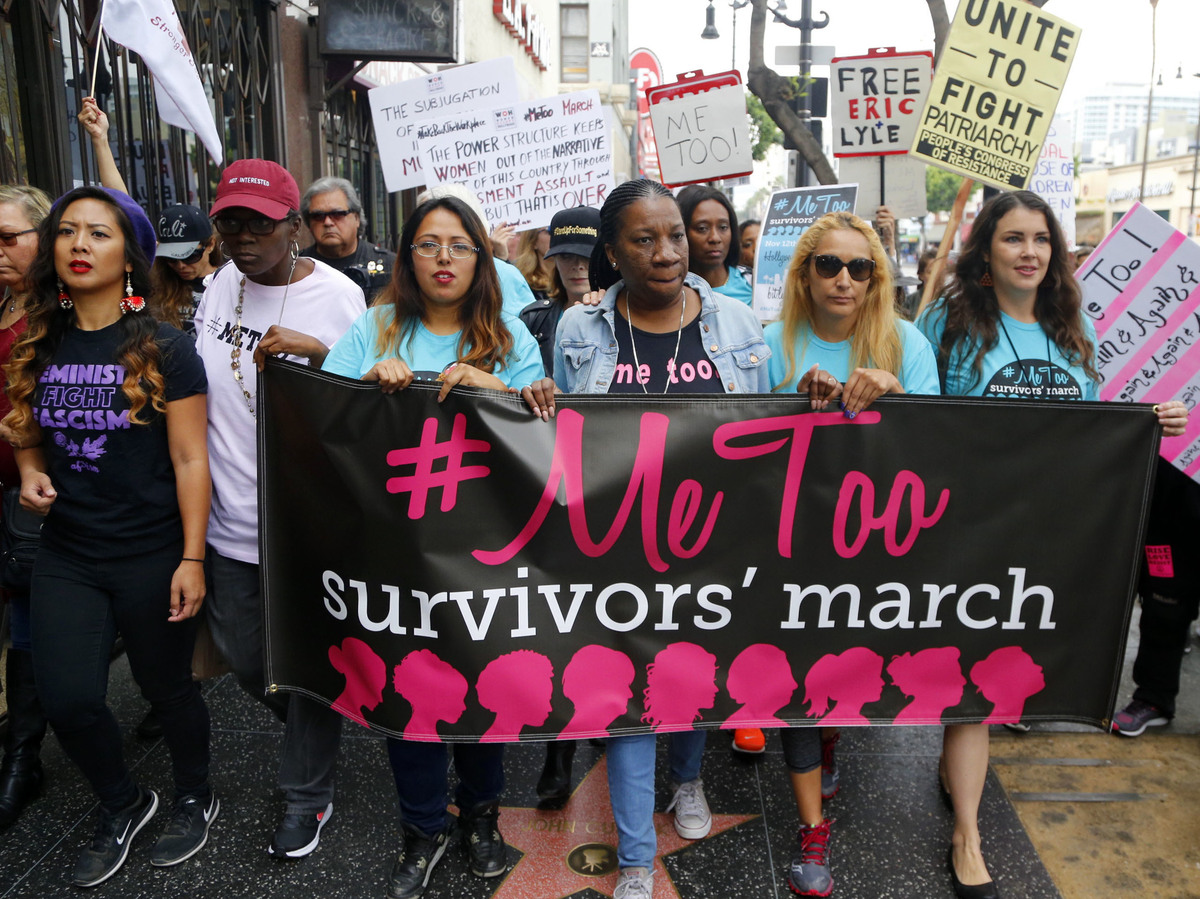 In the wake of the "Me Too" movement, more victims of sexual harassment and assault continue to come forward.

In Norfolk,Va., the YWCA South Hampton Roads's crisis counselors have been answering calls on a 24-hour hotline that serves the region in southeast Virginia. They help victims of sexual assault, domestic violence, and related types of abuse find shelter, counseling, and other services.

"[We're hearing from] people who were recently sexually assaulted, people just wanting to process a harassment issue, or people who experienced it a long time ago and were maybe triggered from the recent social media stuff," says Nicole Nordan, the counseling program director.

Nordan says calls normally slow down around the holidays and in the colder months, but not this year.

As more victims of sexual harassment and assault continue to come forward in the wake of the "Me Too" movement, organizations like the YWCA and rape crisis groups that provide support to survivors are finding themselves unusually busy. They are feeling the ripple effects of the recent wave of allegations against high-profile men in media, entertainment, and other industries.

How TV Foreshadowed The #MeToo Movement

Multiple companies and organizations – including NPR – have fired or suspended high-profile powerful men accused of sexual harassment, and Nordan says many callers are reaching out after their own experiences of harassment, assault, and other abuse.

At the YWCA, the hallways are filled with the soft purr of white noise machines.

On the other side of the office walls, Development Director Laura Boone says counselors are meeting with people who've reached out for support. They work with victims to decide if they need help getting counseling, reporting an assault, finding a safe place to live, and other services.

"The noise machines are placed outside of each one of the counseling offices, and it's to give privacy to the client," Boone says. "The walls are thin in here; we're trying to pack everybody in here, to be able to service everyone."

She says the YWCA has had to lean more heavily on interns to help meet the demand.

The high-profile incidents, advocates say, are empowering others to report their own stories.

"People feel, 'Okay now I won't be ignored; people won't judge me; they won't say they won't believe me,' because others in the community are coming out and people are standing by them," Nordan says.

Not "too late" to ask for help

On the other side of the state, Bristol Crisis Center in largely rural southwestern Virginia is seeing a similar influx of hotline calls.

"And they'll ask me ... is it too late to get help or maybe get resources for counseling or something, and the answer to that is 'no,' " Lawson says.

Lawson says the "me too" movement that emerged on social media in the wake of the sexual harassment and assault allegations against Hollywood producer Harvey Weinstein has made many people feel empowered to come forward. But for some, she says the barrage of news about the subject triggers painful memories.

"That is a topic of conversation almost every week in our support group," Lawson says. "You can't go to the grocery store and buy an apple without seeing sexual assault plastered on the front page of a magazine."

She says it's too early to fully quantify the effect of the movement, but crisis hotline workers are also needing support as they get busier.

"Because some of the areas they might have turned to for recovery or self-care now feel sort of tainted by sexual violence – like the entertainment industry or the music industry," Williams Hueter says. "And that's been really difficult, too, to lose heart in people that we looked up to or people that we relied on for a break."

At the Rape, Abuse, and Incest National Network, or RAINN, services provided to victims were up 25 percent in November compared to last year.

The demand has been so great, says President Scott Berkowitz, that RAINN has had to hire 40 new staffers for its national hotline in the past two months.

"We're hiring as quickly as we can. So as far as we can tell, this isn't slowing down anytime soon," he says.

Berkowitz says when sexual harassment and assault are in the news, the crisis hotline often sees a brief spike in calls. But he says the "me too" movement has opened the door to a flood of requests for help that could continue for much longer.

If you need support:

There are many resources available, both locally and nationally for victims of sexual abuse, harassment, assault, or domestic violence to seek help. Here are a few: