Accessibility links
FACT CHECK: Where Roy Moore's Voter Fraud Claims Fall Flat The Alabama GOP Senate nominee's lawsuit was dismissed by a judge on Thursday as the secretary of state certified Democrat Doug Jones the winner of the special election earlier this month. 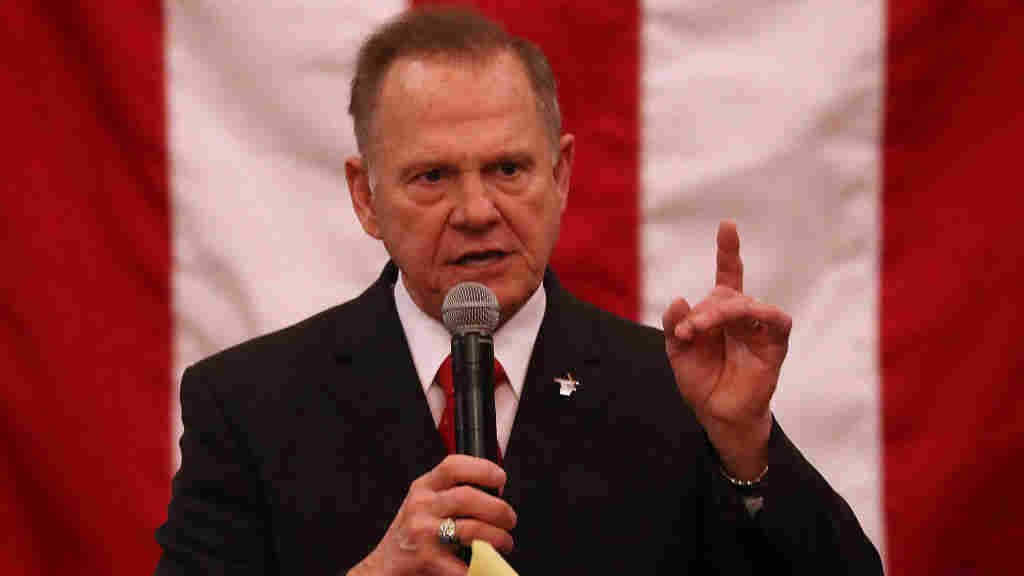 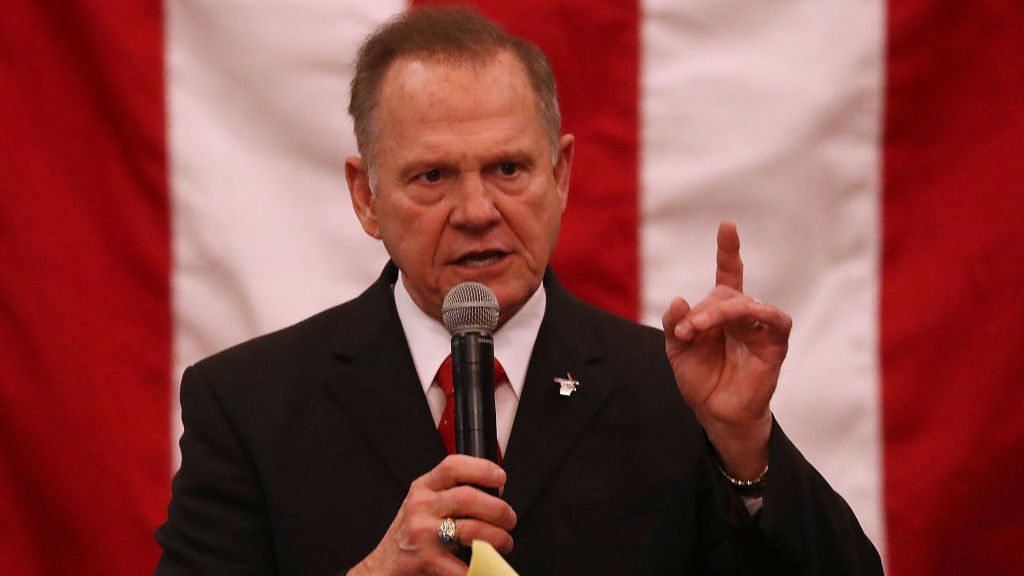 Alabama GOP Senate nominee Roy Moore speaks during a campaign event in Midland City on the eve of the special election earlier this month.

More than two weeks after the Alabama Republican Senate nominee lost the state's special election to Democrat Doug Jones by about 20,000 votes, Moore not only has yet to concede but filed a lawsuit alleging voter fraud — just hours before the election was set to be certified.

On Thursday, a judge rejected the lawsuit. The certification of Jones as the winner went on as planned.

Moore's defiance shouldn't come as a surprise. He resisted entreaties by national Republicans to exit the race after the contest was roiled by accusations from multiple women who say Moore sexually assaulted or pursued them romantically when they were teenagers and he was in his 30s.

On election night, Moore did not admit defeat. Days later, he issued a video bemoaning "immorality [that] sweeps over our land." The former Alabama state Supreme Court chief justice — who was removed from the bench twice — and outspoken Christian nationalist also railed against "abortion, sodomy and materialism."

Moore laid out his grievances, asking for a new election to be ordered. But his effort failed. That might be because there are several problems and factual errors with his claims — that even Republicans are sounding off against.

Claim No. 1: "The reported results were contrary to most of the impartial independent polls conducted prior to the special election and in contrast to exit polls."

In reality, the Alabama pre-election polls were all over the place. Think your candidate was ahead? There was a poll for that! As the RealClearPolitics poll archive shows, the final polls showed a swing anywhere from Jones up 10 points to Moore up 9.

Pollsters were flummoxed by exactly how to model such an unpredictable election, where turnout, given the scandal that had enveloped the final month of the race, was such a big question mark.

"The Alabama race is a case study in nearly everything that makes horserace polling tricky. Its mid-December date, and the fact that there's nothing else on the ballot, means pollsters have relatively little data to guide their assumptions about who'll turn out to vote. The flurry of sexual misconduct allegations surrounding Moore, and the shifting reactions of national and state Republicans ― the party's national committee pulled funding for the race, but then reinstated it ― complicate things further."

Plus, polls aren't a justification or an exact predictor of how an election is going to turn out. As President Trump likes to frequently remind people, if the 2016 polls had been right, Hillary Clinton would be president right now.

As for exit polls, those did show a surge of black voters, especially women and younger voters — all of whom are key Democratic constituencies. The black turnout was essentially what President Obama got in the state, a striking mark given that this was an off-year special election as compared with a presidential election. And about 21 percent of moderate or liberal Republicans crossed over to vote for Jones rather than Moore, likely swayed by the sexual assault allegations against him.

But Richard Charnin, one of those so-called experts, is a well-known conspiracy theorist whose blog contains sections about the John F. Kennedy assassination and claims that Trump won the popular vote in the 2016 election — even though he in fact lost it by almost 3 million votes.

Even J. Christian Adams, a GOP lawyer and president of the Public Interest Legal Foundation, who sits on Trump's voter-fraud commission and is often outspoken about concerns about voter fraud, called Moore's lawsuit and the inclusion of Charnin as an expert a farce.

Just read the Ray Moore complaint. If I was a #voterfraud denier trying to discredit the #electionintegrity movement, I'd invent that lawsuit. Simple explanation rebuts core of lawsuit: Many in #GOP didn't want to vote for Moore. Very sad and humiliating. Then this: pic.twitter.com/oUIHt9CqvU

Worse, the Roy Moore lawsuit relies on an expert who believes in crazy conspiracies that the voting machines are all connected by secret wireless communications to the Mother Ship. Can someone sane in #AL please pull this plug?? pic.twitter.com/BJDLud7JYR

Charnin's analysis zeroes in on precincts in Jefferson County, which he claims have enough irregularities to reverse the election, and "calculates the probability of the election results in these precincts happening naturally is 'less than one in 15 billion.' "

Jefferson County is where Birmingham is located and, according to the Census Bureau, is 43 percent African-American. Moore is alleging that there was higher-than-usual turnout in some precincts and that typical Republican voters dropped off. But that assumes GOP voters would fall behind Moore in lockstep, and clearly they did not given the multiple allegations against him.

Jones voters were not as conflicted. In the high Jones performing precincts (likely predominantly African-American), there are fewer write-ins and less divergence between straight party voting and candidates' vote shares

Similarly, Moore voters in high Moore performing precincts (likely rural White) were not as conflicted, there are fewer write-ins and less divergence between straight party voting and candidates' vote shares

Is this evidence of vote fraud? I'd say not. The most likely explanation is conflicted Republicans voting where we'd expect to find them: in swing precincts. Vote fraud would mean a systematic subversion of *only the votes for candidates* across multiple precincts

Claim No. 3: "Defendant should delay any certification until a meaningful investigation into the above-alleged instances of voter fraud has been completed."

Moore's complaint lays out multiple allegations of voting irregularities, including sample ballots that had been marked for Jones, and claims that out-of-state residents had voted in the election and voters tried to cast more than one ballot.

Alabama Secretary of State John Merrill — a Republican who supported Moore — told NPR's Here & Now on Thursday that the four most serious allegations "have all been vetted and all been cleared" by his office and "there was no fraud in those particular instances."

In total, Merrill said his campaign had received just over 100 complaints, with 60 already adjudicated and 40 still under investigation. Merrill added that there was no truth to claims of fraud in a town that turned out to be fictitious, that five busloads of African-Americans from Mississippi voted or that three vanloads of Mexicans voted in the election.

Merrill also said his office tracked down one man who claimed in a video that he came from another state to vote and that the man was discovered to be an Alabama resident. Merrill's office also looked at the marked sample ballots and said it was a "closed matter." And these were sample ballots anyway — not real ballots.

The legal filing also includes an article from the pro-Moore conservative Breitbart News, run by former White House chief strategist Steve Bannon, who campaigned for Moore. It is about alleged intimidation tactics by Highway 31, a Democratic superPAC. Highway 31 ran a YouTube ad claiming Alabamians' votes would be public record and that neighbors would know if they voted for a "child predator."

Merrill's office addressed the ad before Election Day, clarifying that:

"When voters cast a ballot the State of Alabama's voter registration system is updated to document the election that a voter participated in but no record is ever made documenting the candidate for whom the ballot was cast. ... We have communicated with the individual(s) that created the video and have expressed to them the misinterpretations presented in this political commercial. Monday, the PAC responded to the Office and indicated they would not amend nor take out any of the information in the ad."

Moore's campaign also included Internet comments on the article, in which commenters say, for example: "the leftists may soon find out how much lead there is in Red State America" — an apparent reference to bullets and guns. 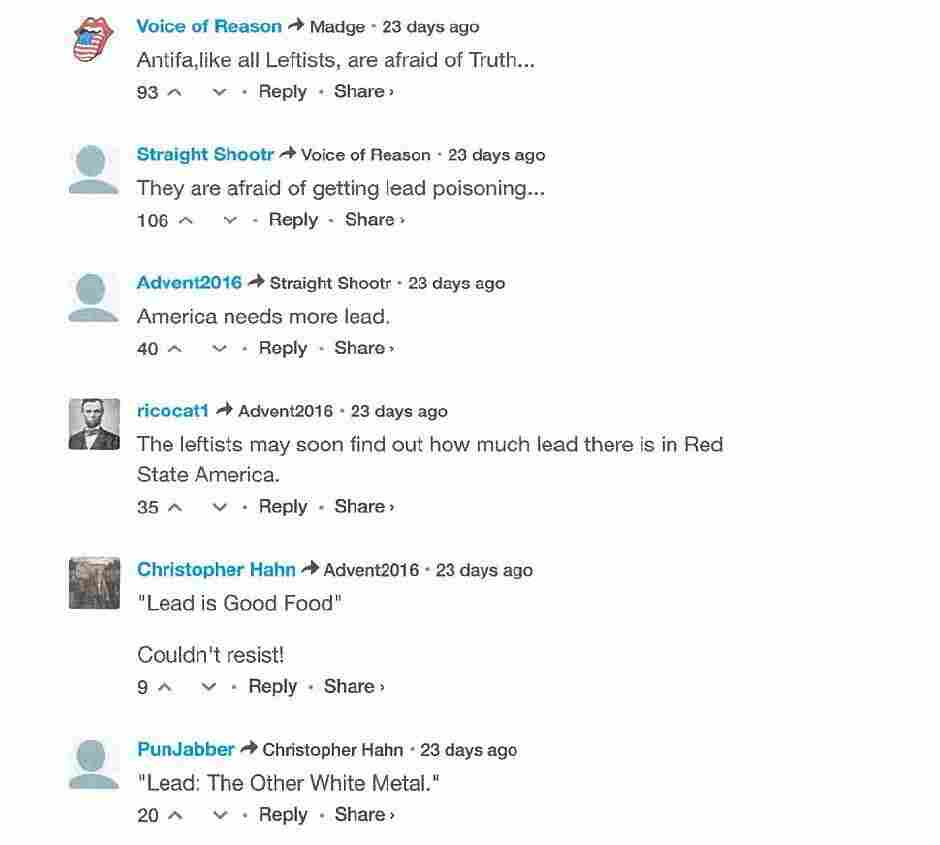 Claim No. 4: "Moreover, Plaintiff Roy Moore has successfully completed a polygraph test confirming that the representations of misconduct made against him during the campaign are completely false."

The first thing that one may wonder is why Moore didn't take a polygraph before Election Day instead of after.

In an interview on CNN Thursday, even Moore spokeswoman Janet Porter conceded that might have been more effective. Moore included his own affidavit saying he passed the polygraph, noting: "As I had expected, the results of the examination reflected that I did not know, nor had I ever had any sexual contact with any of these individuals."

There is no report provided from the polygraph administrator, no notes about how questions were asked or even who conducted it. There is much debate over accurate polygraph tests can be, anyway, and they aren't admissible in court in most instances.

They can often produce inaccurate results, as NPR reported in 2007:

"Herein lies the rub. While the polygraph can show when someone gets anxious, it can't say definitively what is triggering their anxiety. Critics of the machine say it is as much about intimidation as it is about not telling the truth."

In 2003, the National Academy of Sciences decided to put the machine to the test. Its conclusion: When the polygraph was used to investigate a specific incident, it performed "well above chance though well below perfection."

It was hardly a ringing endorsement. The problem, the academy's report said, was that while the physical manifestations often associated with lying could be measured by the polygraph, the very same problems — increased heart rate, skyrocketing blood pressure and sweaty palms — could happen in the absence of a lie as well.

In any case, none of these are evidence of fraud, but it is perhaps not surprising that Moore is trying this. After all, it's ripped right from Trump's playbook. Trump claims voter fraud caused him to lose the popular vote — by 3 million votes — with no evidence. So, what's claiming 20,000?

A previous version of this story incorrectly gave Richard Charnin's last name as Charmin and also referred to John Merrill's last name as Miller in one instance.