Accessibility links
In Season 4 Of 'Black Mirror,' Power Corrupts, But Love Still Matters The fourth season of Black Mirror continues to explore technology and privacy, but also more fundamental impulses of power and love. All that, plus a Star Trek send-up that's spot-on. 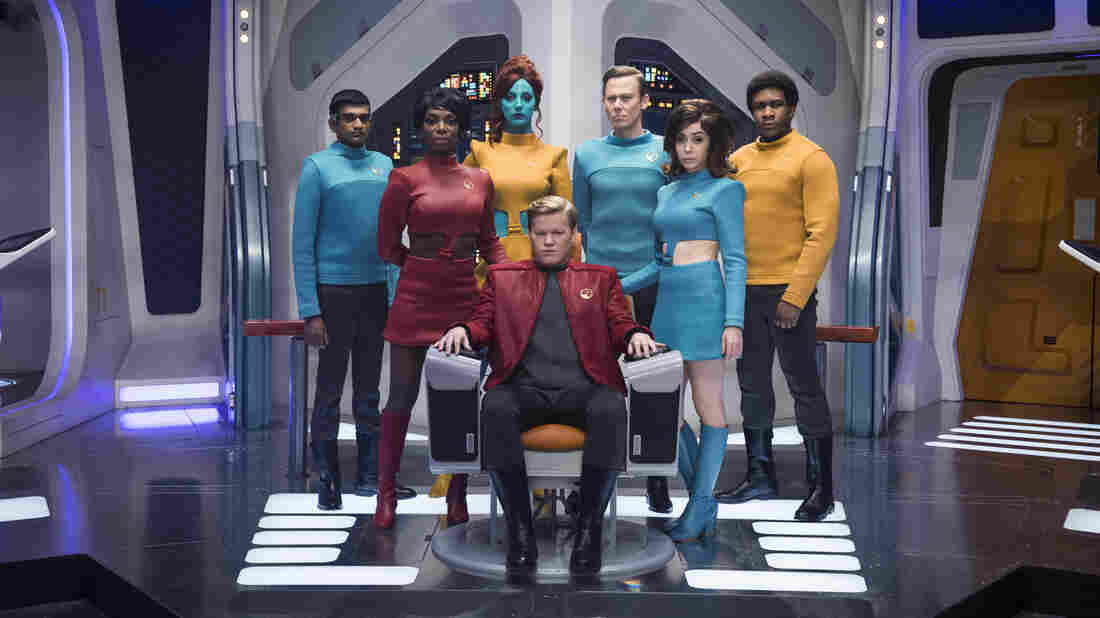 The cast of "USS Callister," one of the latest episodes of Black Mirror. Jonathan Prime /Netflix hide caption 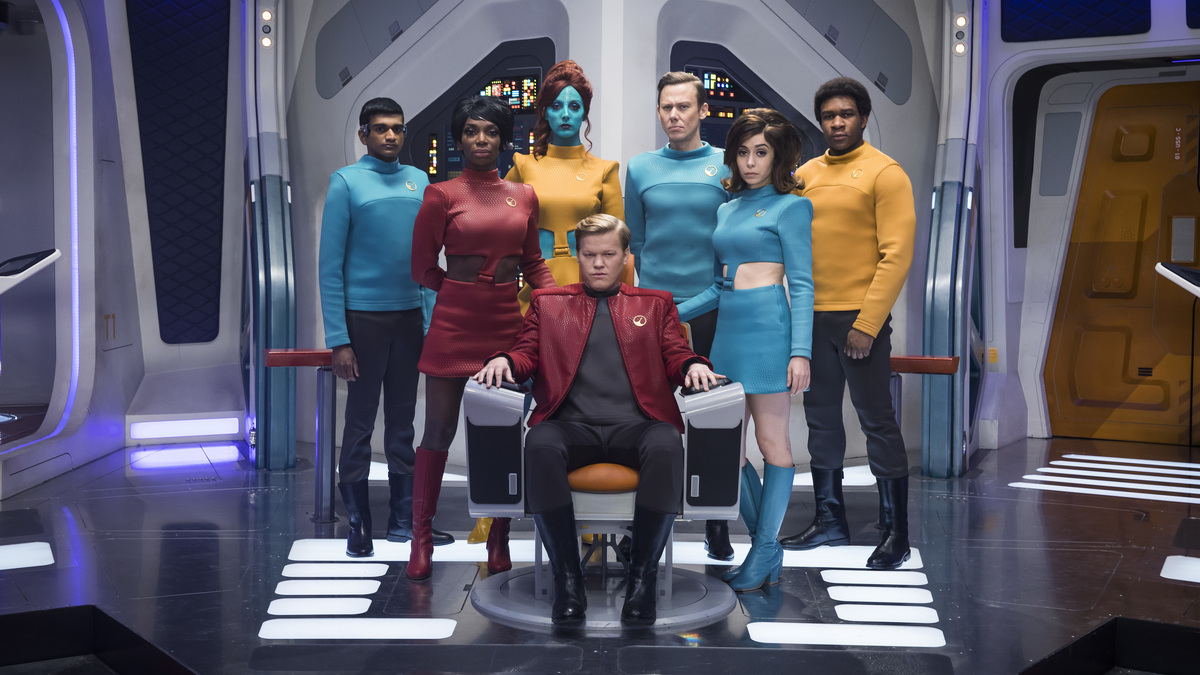 The cast of "USS Callister," one of the latest episodes of Black Mirror.

Note: At the top of this page, you can listen to the Pop Culture Happy Hour episode about Black Mirror, with guests Brittany Luse and Chris Klimek.

Black Mirror is an anthology where technology, at times, might seem like the lurking monster. Originally created for British television and now produced by Netflix, the series imagines leaps forward in software, surveillance, artificial intelligence, virtual reality and biotech that result, usually, in disaster. Not always — but usually.

In fact, Black Mirror, created by Charlie Brooker, is largely a multi-part study of power. The relevance of technology is mostly that it grants power around which the people who receive it haven't yet developed ethical ideas. In the show's gentler episodes, it allows people to explore love and connection in new ways, across what we now believe to be barriers — like mortality.

But very often, the moral of the story, so to speak, is that we are worse than we believe we are, only because our behavior is constrained by what we can do, not what we are willing to do. For instance, we may believe that we do not spy on our loved ones because we have developed trust, when in fact, we do not spy on our loved ones because it's too difficult to do reliably without getting caught. With great power comes great responsibility — you've heard that from the story of a man who can climb buildings and shoot webs out of his wrists, right? Well, Black Mirror spends much of its time considering what happens when more of us have great power, given that we have no reason to believe we are prone to exercise great responsibility.

Power is the theme of "USS Callister," written by Brooker and William Bridges. It's the most incisive piece of the six-episode fourth season that just dropped on Netflix. It begins as a straightforward parody — almost too precise a copy to be a parody, in fact — of the original Star Trek. The Kirk-esque captain of Space Fleet is played by Jesse Plemons, the versatile and very busy actor who first became well-known playing Landry on Friday Night Lights. Actors playing members of the crew include Michaela Coel, so delightful in her own series Chewing Gum, and Jimmi Simpson, who has "smug weasel" written all over him from the first minute.

Not only does the episode examine the way the captain uses power (which is of particular interest given recent conversations about sexual harassment), but it goes on to a deeper exploration of how pop-culture portrayals of power affect and infect the people who absorb them. Cristin Milioti, as a new member of the crew, has to navigate — as it were — the captain's particular powers and his methods of ensuring compliance. It's a frightening and fearless examination of not one but two separate hero myths: the flawless captain of adventure and the bullied fan who lives vicariously through his exploits.

While "USS Callister" is the most timely and vital of the new episodes, "Hang The DJ" (named after a line in a song by The Smiths) is the freshest and the most humane. Georgina Campbell and Joe Cole, both enchanting British actors many American viewers may be seeing for the first time, play a couple meeting on a new dating app that upsets expectations about what you can and cannot know about a person you've just met. Not in the "Google the person and find out all about their criminal record" sense, but in ways more complicated and interesting. "Black Mirror" hasn't really done much in the way of romantic comedy, but the scenes between Campbell and Cole sparkle and build emotional stakes in the way all great examples of the genre do.

The other four episodes are solid. "Arkangel" returns to the show's fixation on surveillance, "Metalhead" to mechanical horrors, "Black Museum" on the fundamentals of mind-reading and mind-swapping, and "Crocodile" about memory. There are no duds, but "USS Callister" and "Hang the DJ" best demonstrate what the show, at its best, can do.