Accessibility links
Anger Builds 100 Days After Maria Hit Puerto Rico Chaylin Palma says she struggles to have positive thoughts when her family is ending the year in the dark. 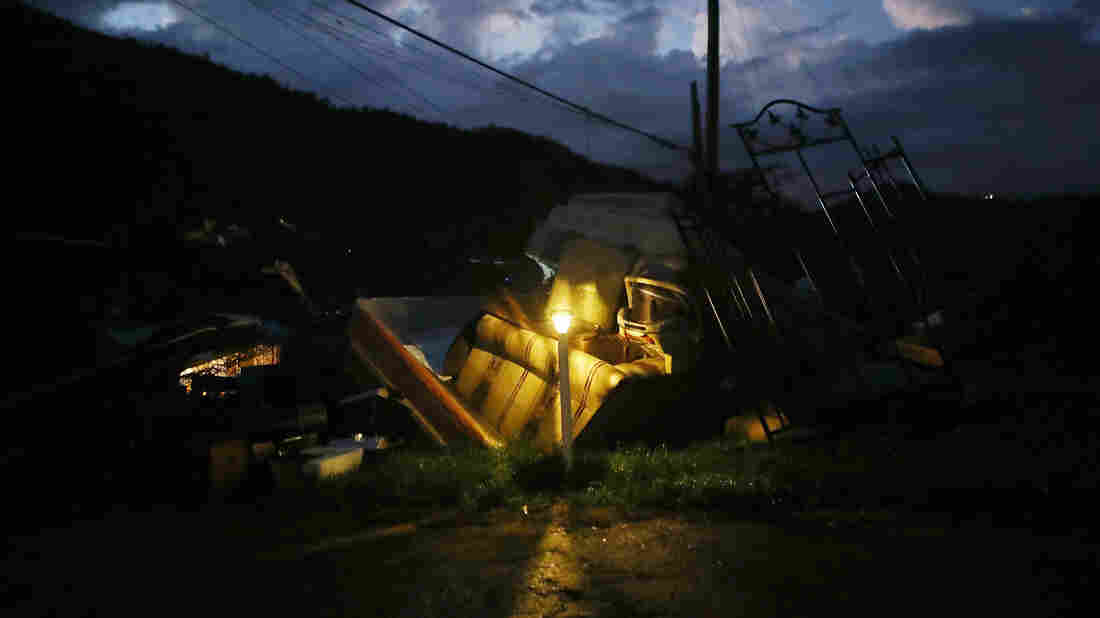 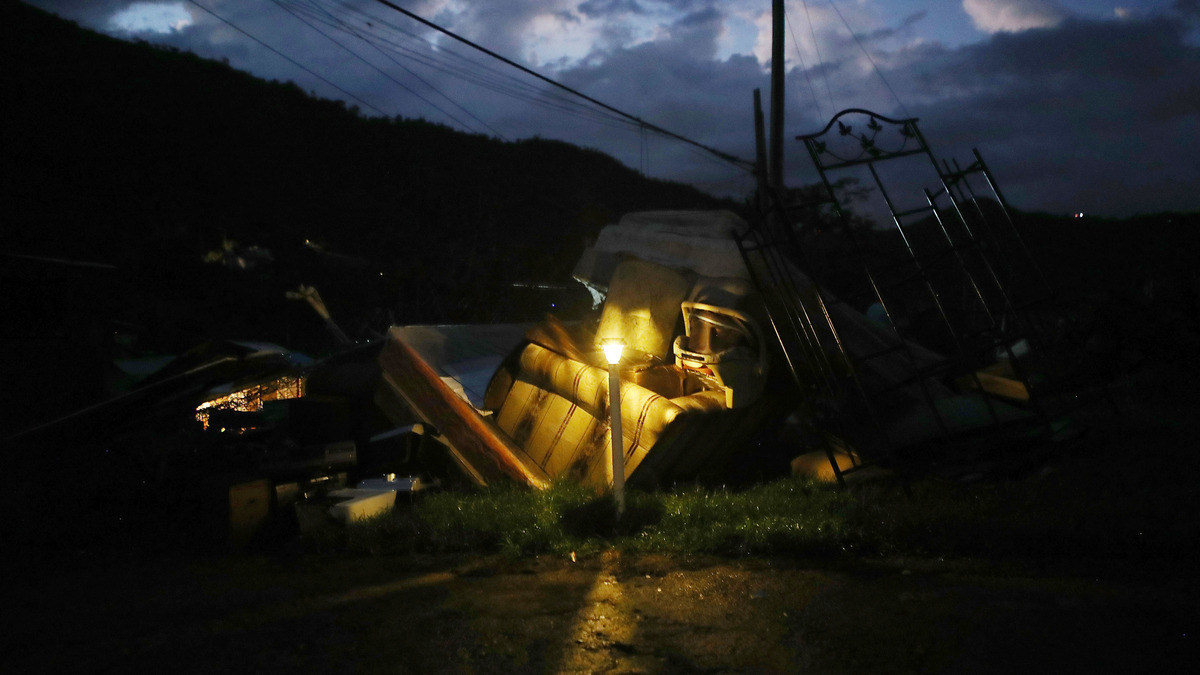 A donated solar lamp in a driveway illuminates storm debris still waiting to be collected earlier this week in Morovis, Puerto Rico.

Now, Puerto Ricans on the island and U.S. mainland are feeling angry and the lack of progress and they are organizing to demand help for Puerto Rico.

Though life has improved for some Puerto Ricans on the island more than three months since Maria hit, the Caribbean island is still in recovery mode.

Before Hurricane Maria hit, the island was already crippled by an economic crisis with more than $74 billion in debt. But the hurricane obliterated Puerto Rico's infrastructure and today more than a million people are still without power, hundreds are still living in shelters and lack reliable drinking water and the health care system is in dire condition. The crisis has triggered an exodus to the mainland.

"It's hard, it's not easy," says Chaylin Palma even though she's now living in an apartment in Ciales with her husband and four kids ages 6 to 9. The family spent more than two months at the Josefa del Rio Guerrero High School in nearby Morovis, located in the central region of the island. The school was being used as a shelter. She's grateful to be out of the shelter and into public housing, she says, but there is no electricity in her new apartment, "I wasn't prepared for this."

She's says she knows she's lucky. "My kids have their own bed now and they are going to school," she says, but "I didn't think we would be in recovery this long." She says she struggles to have positive thoughts when the family is ending the year in the dark.

In spite of promises made by Gov. Ricardo Roselló in October to expedite recovery including restoring at least 95 percent of power to the island, normalcy on the island is still elusive. 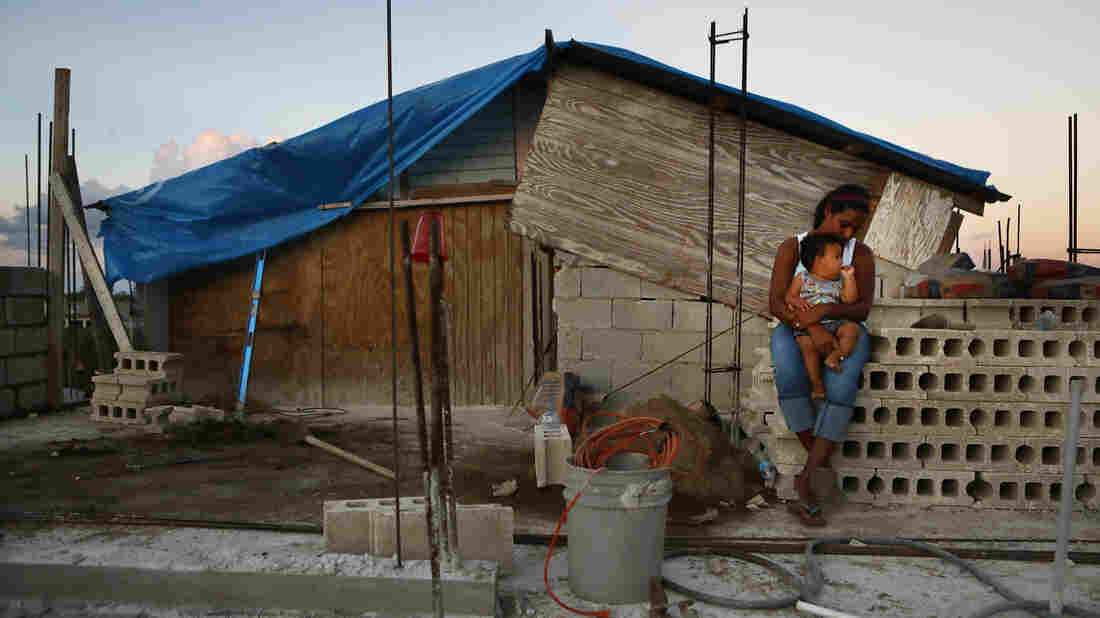 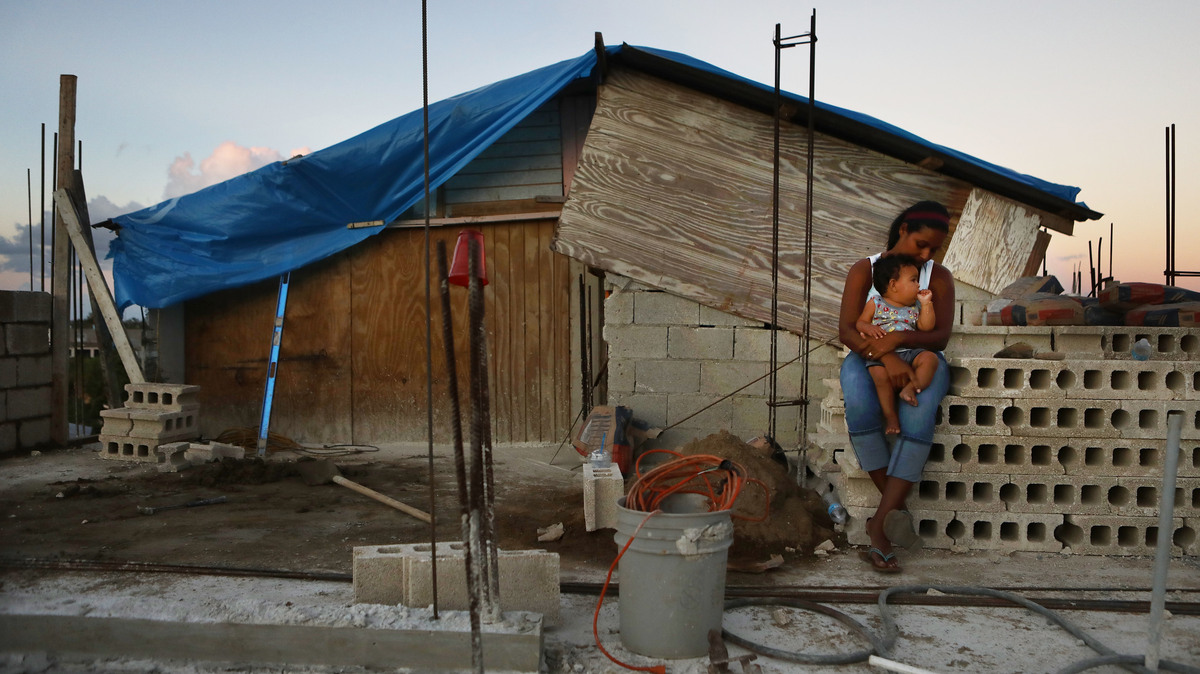 "We had to cancel our Christmas Eve dinner" says Irma Rivera Aviles, "we lost power and water early on December 24." Though power was restored to her home in Cataño on December 1, she says, "black-outs are part of life" in the aftermath of Maria.

Hundreds of thousands have arrived in Florida since the hurricane according to Statuspr.org, a website tracking progress since Maria, and many more people are expected to abandon the small Caribbean island in the months to come.

Since Maria, the humming of generators is ubiquitous throughout the island – Puerto Ricans are depending on them to power lifesaving hospital equipment like dialysis and ventilators, but also to charge cell phones and keep electric stoves, fans and refrigerators running at home.

Those like Irma Rivera who have power and running water restored at home feel lucky, but the system continues to be fragile and unstable.

"We have lost a few appliances to the power surges and the water initially came overnight with so much pressure that busted the kitchen sink valves" says Grizelle González. "So in the morning we woke up with a flooded house."

González says she now has bigger appreciation for showers. Up until the first week of December when her home got power and water back, she and her family took bucket baths – filling a bucket of water and using a mug to wash themselves. She did laundry at work. She's an ecologist at El Yunque National Forest where Maria's fury left a swath of destruction and though "trees continue to leaf up, many areas of the forest are still brown" says González. The forest remains closed to the public. 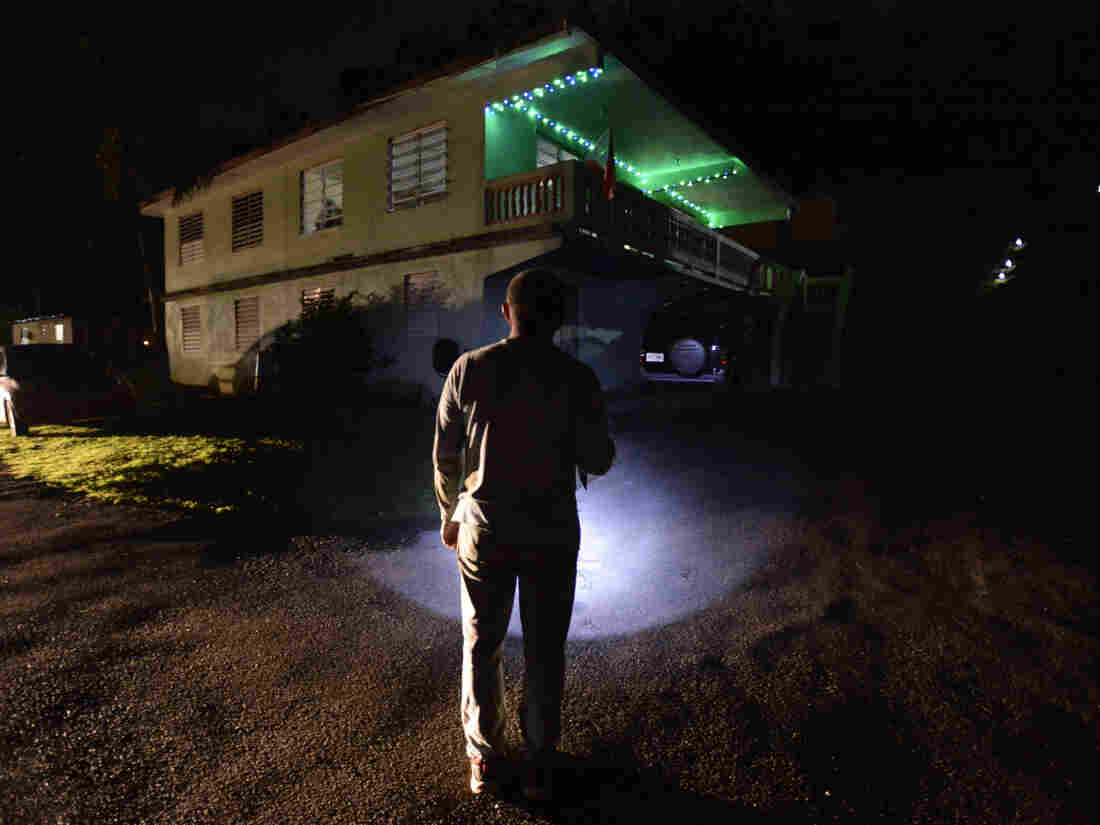 Jose Luis Gonzalez of Morovis illuminates his path with a lantern on a street of the Barrio Patrón. Carlos Giusti/AP hide caption 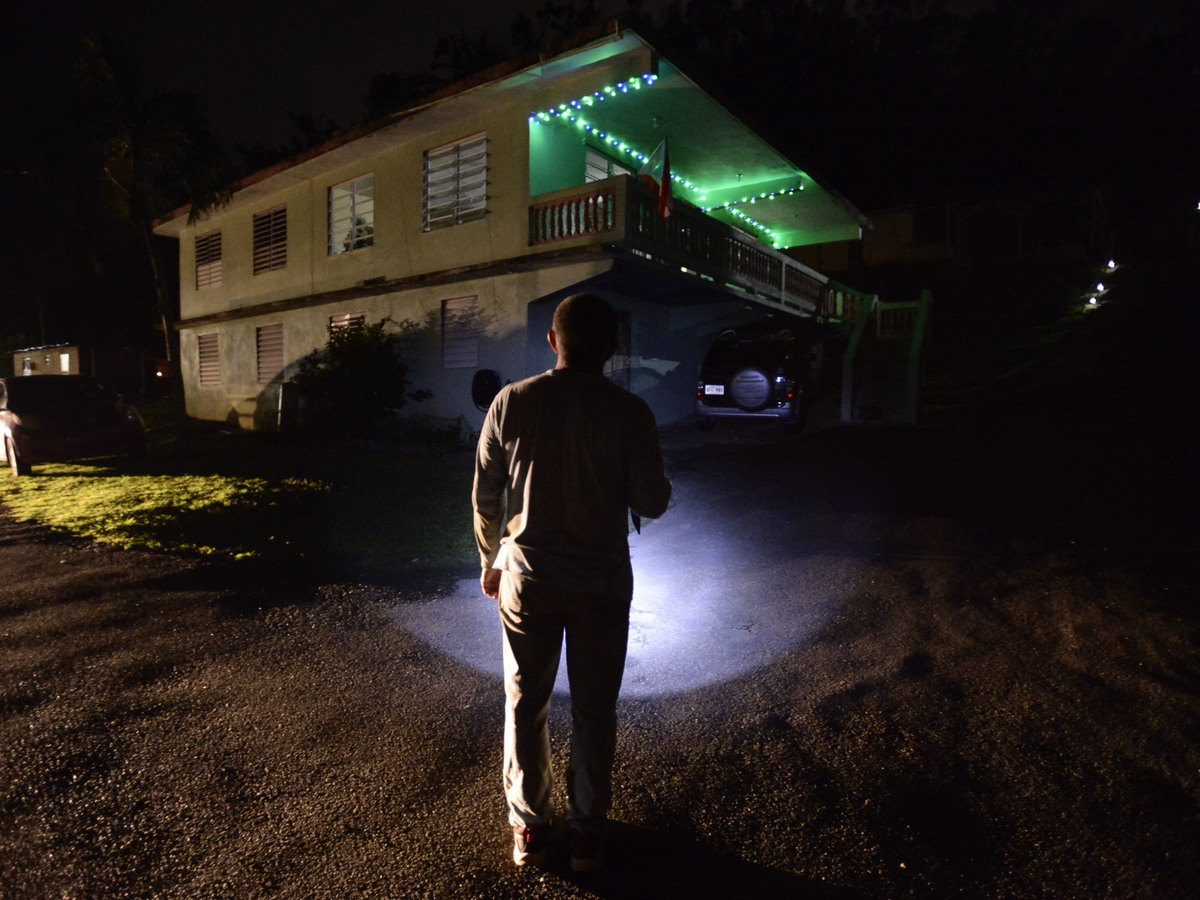 Jose Luis Gonzalez of Morovis illuminates his path with a lantern on a street of the Barrio Patrón.

Meanwhile, Puerto Ricans on the mainland are angry that it's taking too long to rebuild the island after Hurricane Maria. Many say that the lack of progress is exposing people to a growing environmental catastrophe.

One hundred days is an indictment of the U.S. and its lack of commitment to Puerto Rico.

"People are breathing toxic air because of the diesel generators, the water is polluted and they don't have rooftops, highways haven't been fixed," says Elizabeth Yeampierre. She's an attorney and the executive director of UPROSE, a Latino community organization in Brooklyn.

"Communities are completely isolated and they don't have access to health care" says Yeampierre, "100 days is an indictment of the U.S. and its lack of commitment to Puerto Rico," she says.

On a chilly evening this month, members of the Puerto Rican diaspora will gather at Union Square Park in New York City to demand a just recovery for an island still reeling in crisis.

"We hope for a better future for Puerto Ricans on the island," says Yeampierre — one that brings in sovereignty all around to allow Puerto Ricans to create the systems that work for them."

A previous version of this story incorrectly named statusPR.com as a website tracking progress since Hurricane Maria. The correct website is Statuspr.org.