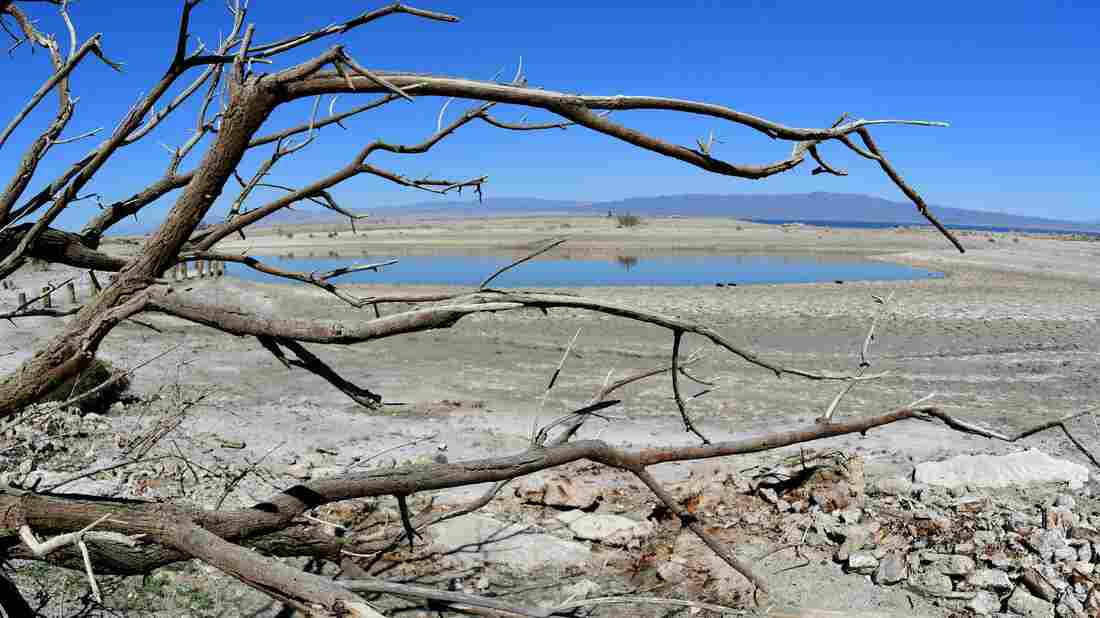 A dead tree frames a former marina inlet on the Salton Sea in Salton City, Calif. A large portion of the lake is expected to dry up in the coming years. Eva Hamback/AFP/Getty Images hide caption 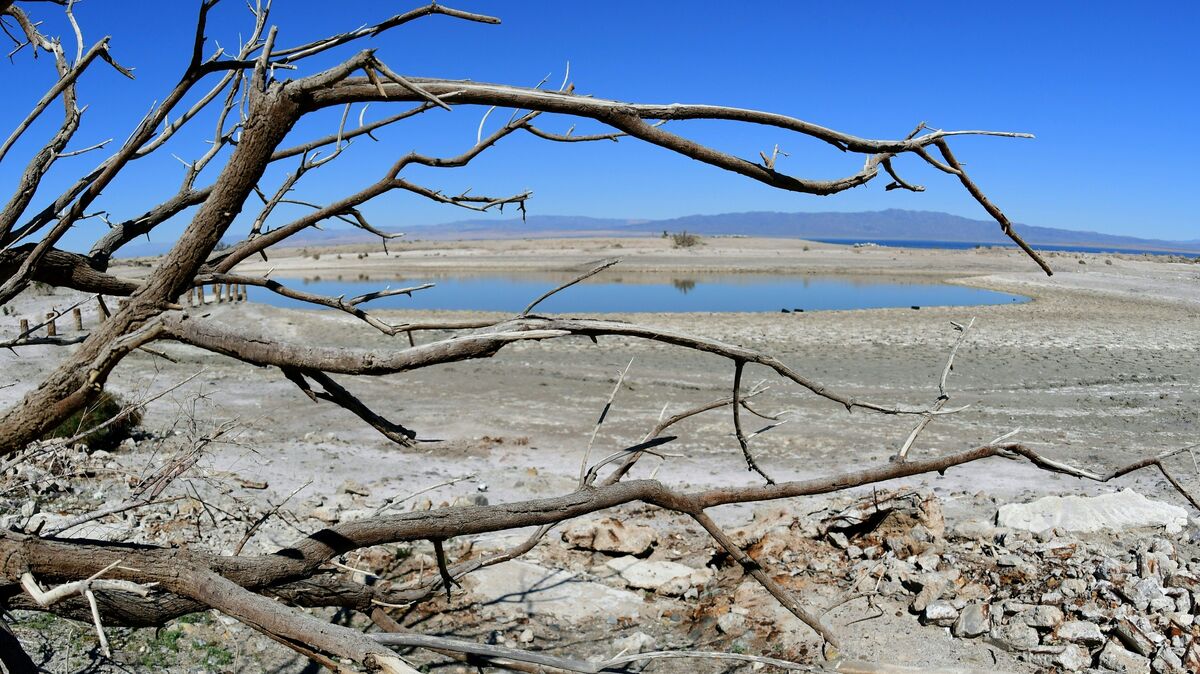 A dead tree frames a former marina inlet on the Salton Sea in Salton City, Calif. A large portion of the lake is expected to dry up in the coming years.

California's legendary Salton Sea may need an epitaph soon, thanks to a "farm to city" water deal that takes full effect in 2018. The controversial deal redirects most of the water that now sustains the Salton Sea to thirsty towns and cities. As a result, in the years ahead, more than a third of the 350-square-mile lake in the deserts of southeastern California is expected to dry up and blow away.

Mitigation experts with the state of California say they're working hard to minimize the environmental side effects of the giant water transfer deal. But critics say the mitigation plan is falls far short of what's needed to protect this former tourist mecca from the impact of the coming water transfer.

By all accounts the Salton Sea has fallen on hard times since the 1950s and the 1960s, when the resort communities that lined the Salton Sea drew tourists by the millions, as well as celebrities like Frank Sinatra's Rat Pack, the Marx Brothers, Sonny Bono and the Beach Boys.

"They called it the Desert Riviera then," said Steven Johnson, a bartender in the tiny town of Bombay Beach. "There were nine marinas, there was swimming, fishing and speed boat racing. It was where you wanted to be." 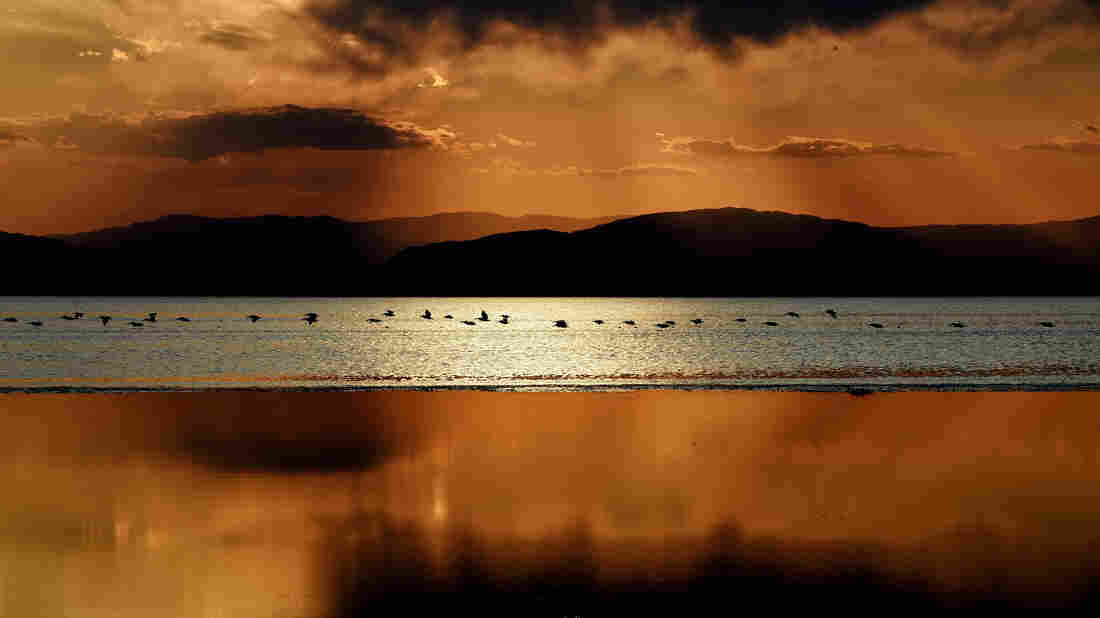 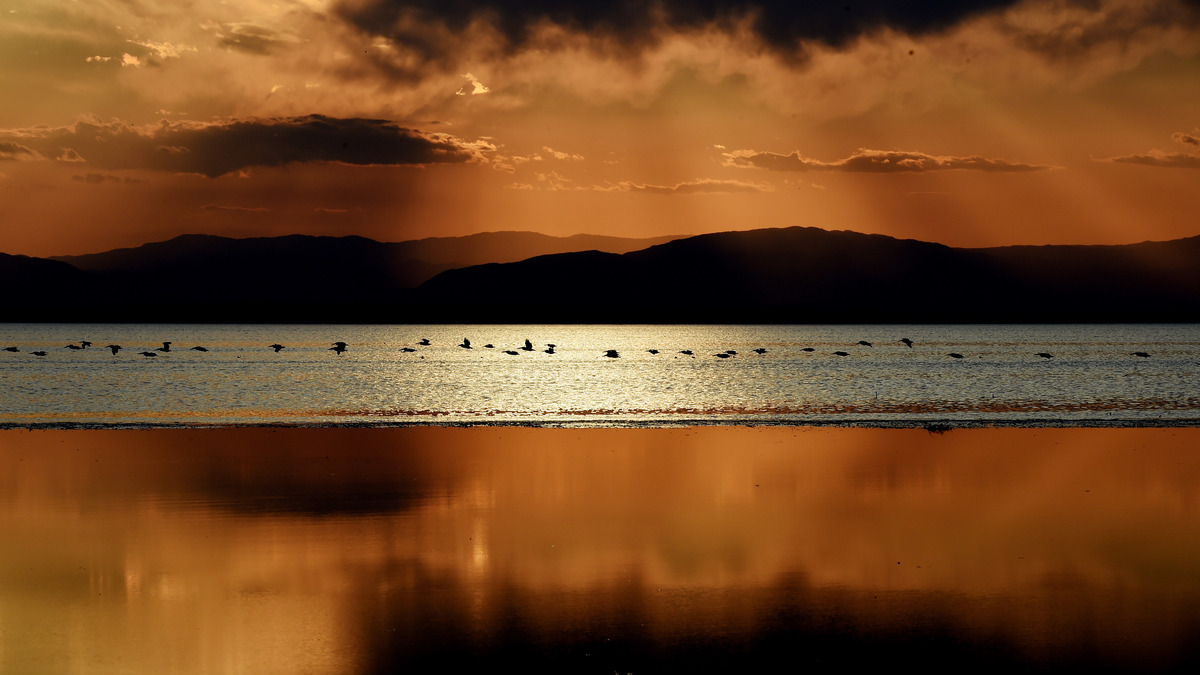 Unfortunately, since the late 1970s, the Desert Riviera has been ravaged by what Johnson calls a "slow-motion apocalypse." Hotels and marinas were ruined by floods, then left high and dry by drought. Giant, stinky algae blooms linked to farm pollutants drove people out of the water. Rising salinity levels linked to evaporation helped kill nearly all the fish. Traces of everything from DDT to arsenic have been detected in the mud beneath the lake, and in dried-out stretches of lakebed exposed by drought.

State and federal plans to solve these kinds of problems have fizzled repeatedly over the years. Critics of the farm to city water transfer say it's likely to make will make all the problems worse. Environmental groups like the National Audubon Society and Defenders of Wildlife say the deal could be disastrous for hundreds of species of migratory birds that roost and feed at the Salton Sea. Many of those species are already in decline. 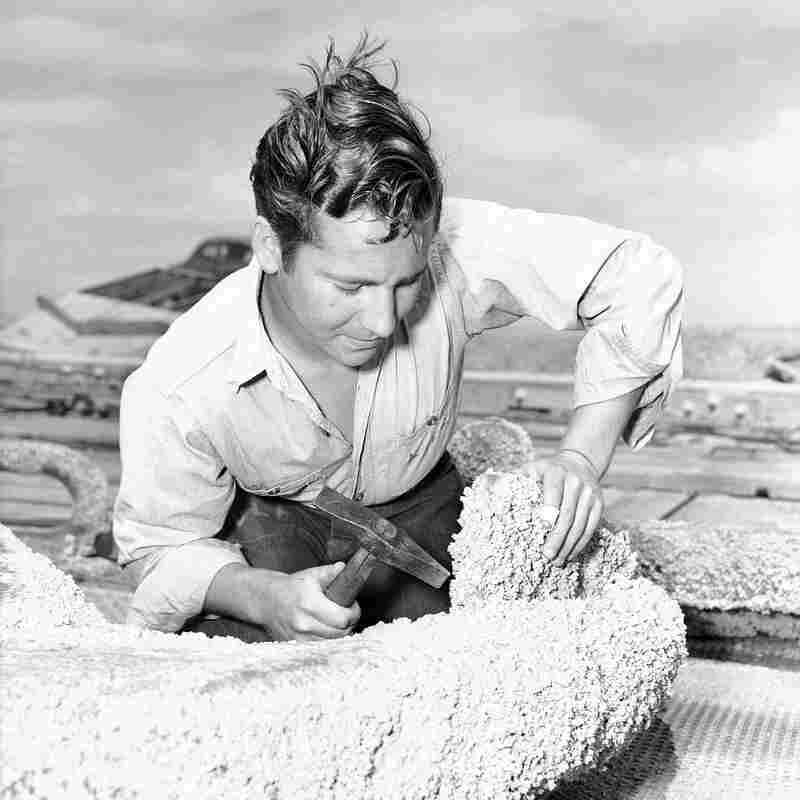 Meanwhile, public health groups are predicting an air pollution crisis arguing that dust clouds from the shrinking sea pose a threat to people living all over the southeastern part of California. Towns and cities near the Salton Sea already have some of the highest asthma rates and worst air problems in the country, thanks in part to everything from agricultural burning to the heavy desert winds. These groups argue that as the Salton Sea shrinks more than 70,000 acres of lakebed laced with toxins will dry out and turn into dust that gets picked up by windstorms. 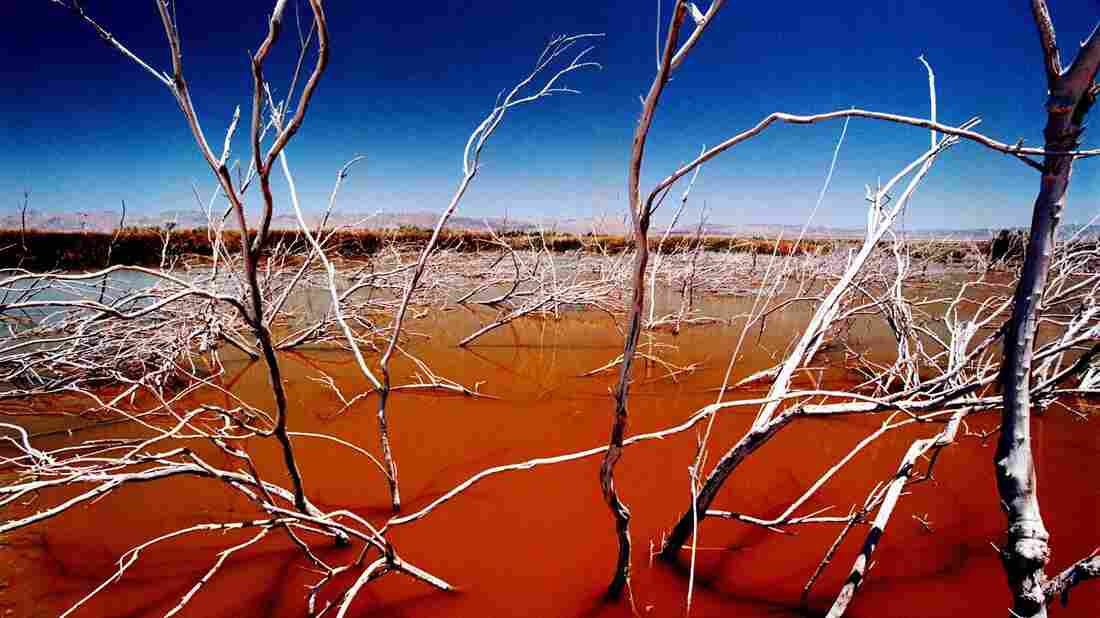 The Salton Sea in 2000, when rising water flooded nearby brush. The water is red with micro-organisms. Getty Images hide caption 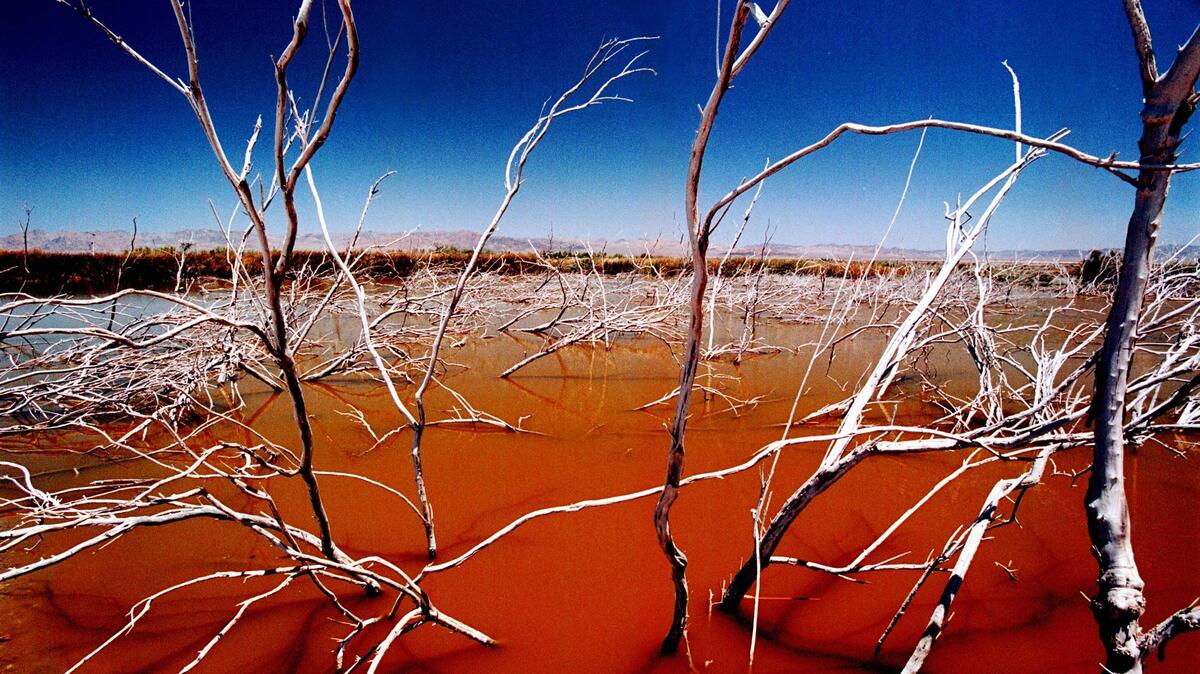 The Salton Sea in 2000, when rising water flooded nearby brush. The water is red with micro-organisms.

"We don't know how dangerous those dust clouds are and that's not right," said Luis Olmedo of Comte Civico del Valle, a non-profit public health group based in Brawley, which is near the Salton Sea. "We don't want to be part of an experiment."

In August, after years of trying, California lawmakers unveiled a $383 million plan to minimize the impact of the water transfer deal. The plan's not fully funded yet but if the funding does come through, it will encircle what's left of the Salton Sea with thousands of acres worth of managed wetlands and fresh water fish ponds. That will help protect the birds and keep the dust clouds down.

"It'll look a little like a donut," said Bruce Wilcox, the assistant secretary for Salton Sea Policy at the California Natural Resources Agency. "We like to say that we are developing a smaller and more sustainable Salton Sea."

Wilcox says he knows that are many people who yearn for a return to the glory days of the Salton Sea. But he says those glory days are gone.