Accessibility links
2017 Has Been A Rough Year For Evangelicals Self-described "evangelical" Christians helped elect President Trump in 2016. But this year, the label lost coherence. Some evangelicals reconsidered what it stood for, while others disowned the term. 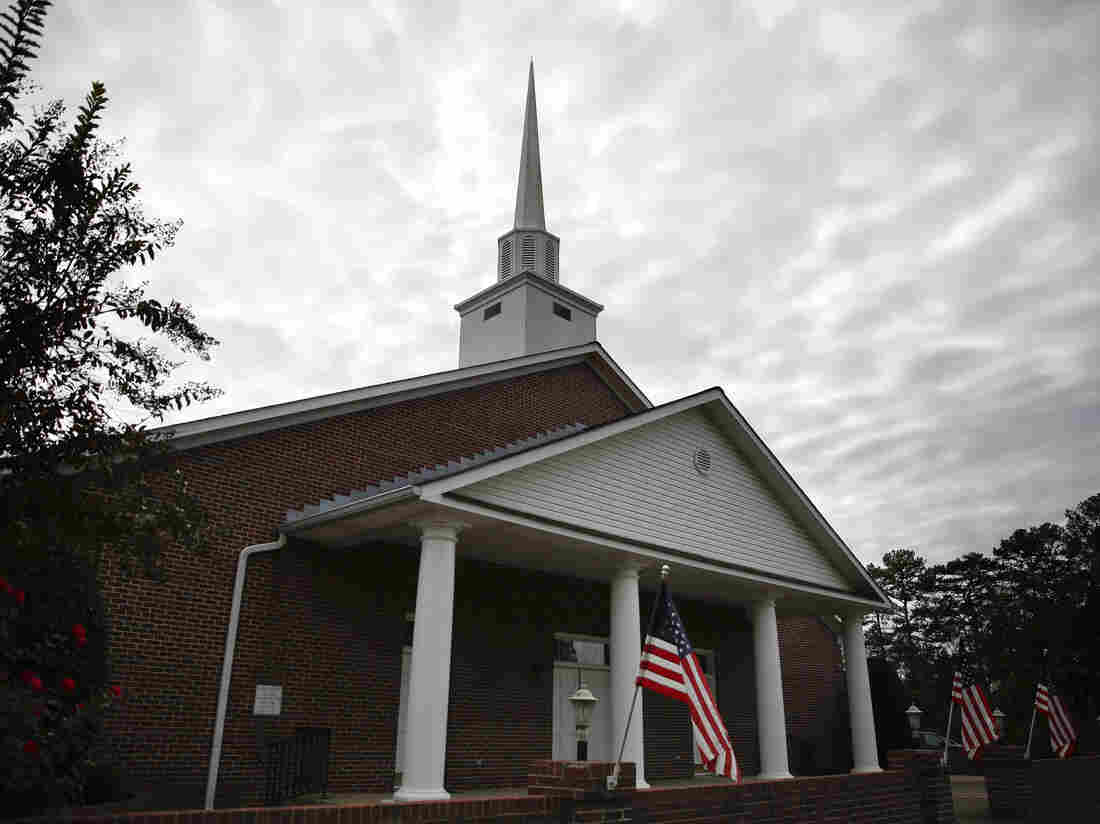 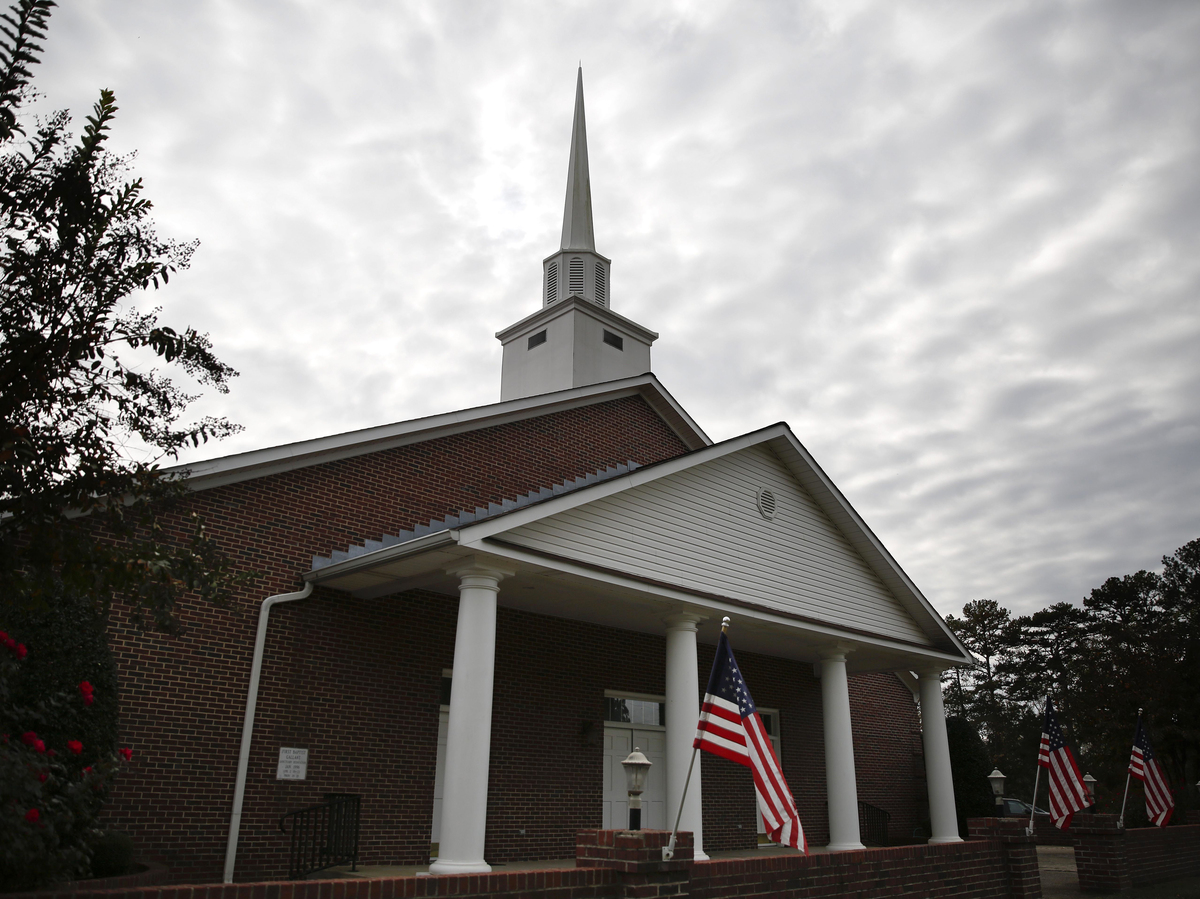 As 2017 ends, evangelical Christians in the United States are suffering one of their periodic identity crises. Unlike other religious groups, the evangelical movement comprises a variety of perspectives and tendencies and is therefore especially prone to splintering and disagreement.

The latest challenge to evangelical unity arises from the extent to which a large majority of self-identified "evangelical" voters have aligned themselves with such politicians as Donald Trump and Judge Roy Moore, both of whom have a record of stoking cultural resentments rather than building community. To some evangelicals, a pattern of narcissism, lies, misogyny and vilifying immigrants and refugees disgraces their religious tradition.

"For those of us who care deeply that our neighbors come to know the love of Jesus Christ, this is a tragic moment," says Collin Hansen, editorial director for The Gospel Coalition, an organization of church leaders dedicated to restoring the "historic beliefs and practices" of traditional evangelicalism. "We talk about the evangel, the good news, that makes us evangelicals, [but] our neighbors hear a certain kind of political agenda or they hear a kind of anger or frustration."

Some prominent evangelical leaders, including Peter Wehner, who served in the George W. Bush administration, and the writer Amy Julia Becker, have publicly disowned the evangelical label in protest over its recent political associations, while others such as David French have suggested that it is time to find a new label.

At the very least, orthodox or conservative Christians are struggling to define evangelicalism more carefully to purge the movement of what many regard as fraudulent expressions.

In the theological sense, evangelical Christianity is defined by its characteristic dogma. A recent survey of self-described evangelicals by LifeWay Research (affiliated with the Southern Baptist Convention) found that less than half of that group actually accepted the authority of the Bible, believed that trust in Jesus Christ is the key to eternal salvation, and shared a commitment to spread the Gospel message to non-Christians. The researchers did not ask about political beliefs or voting history.

"These particular findings arrive at a time when many evangelicals are questioning whether the term is still a term we ought to be using," says Scott McConnell, who directed the LifeWay survey. "It's a reminder to this community that 'evangelical' is about beliefs."

The proselytizing element of evangelicalism is inherent in the terminology. The word "evangel" derives from Latin, Greek, Old English and French and roughly means good news. The word "gospel" likewise stems from the Old English words "god," or good, and "spel," or story. In the view of some purist evangelicals, it is precisely that tradition of spreading the good news of salvation through Christ that may be threatened by a preoccupation with conservative social issues and culture wars.

In recent years, the evangelical label has had increasingly strong political connotations, with pollsters and news organizations paying closer attention to the "evangelical vote" and evangelicals themselves becoming more passionate about politics.

"There is this perception now that evangelicals are fundamentally politically conservative people and that their religion is just a veneer," says Mark Galli, editor-in-chief of Christianity Today.

The association of religion and politics is by no means new in American history. The civil rights movement in the 1960s was led in large part by church leaders. Today, however, the top political concern in evangelical circles is that secularism is dominating the popular culture and making it more difficult to express one's religious faith.

"There are forces in our culture that want to take God out of the public square," says Stephen Strang, whose new book, God and Donald Trump, lays out an explanation for why an estimated 80 percent of white evangelicals supported Trump in the 2016 election. As an evangelical, Strang defends a political interpretation of his faith. "My belief system caused me to decide who I was going to marry, where I would live, even the kind of work I do," he says. "It affects everything about me, including the way I vote."

It is precisely this association between religion and politics, however, that is causing increased consternation in evangelical circles, according to Galli, whose magazine was founded by Billy Graham, America's most famous evangelist.

"[The argument] that we are in an age of accelerating secularization in America is correct," Galli says. "My disagreement is with the idea that politics is the way to get a more Judeo-Christian morality reinstated in America. People are thinking, 'If we just pass one more piece of legislation, we'll be getting that much closer to the kingdom of heaven.' I just think that's a huge mistake."

The evangelical movement has also been challenged by the #MeToo movement, one result of which has been an increased willingness of evangelical women to speak out. When Alabama Senate candidate Moore faced allegations that he had sexually abused young women, the popular Christian writer Beth Moore (no relation) was unsparing in her criticism of those Christians who would ignore such moral flaws in a candidate. "This idea that God puts up with secret sins from His servants for the greater good is a total crock," she tweeted.

The association of evangelicals with right-wing politics and culture war may also be undermined as younger evangelicals assume leadership positions in the movement.

"When I've traveled to Christian liberal arts schools, I've always been struck by how many students really reject that [evangelical] label," says Molly Worthen, a historian at the University of North Carolina who specializes in the study of evangelical Christians. "I think this is particularly common among the millennial generation. There is a kind of exhaustion with aggressive, Moral Majority-style politics that has rubbed younger evangelicals the wrong way."

Younger evangelicals are also more likely to have relationships with people of other ethnic backgrounds, and the continuation of that trend is likely to undermine the politicization of the evangelical movement, says Scott McConnell of LifeWay Research.

"There really has been a lot of growth in new church starts that are multiethnic," he says. "And when you talk about evangelical as meaning beliefs from the word of God, then evangelicals can embrace that without having to cringe about politics latching on."