Accessibility links
The Mueller Russia Investigation Chosen As Top Political Story Of The Year The investigation into Russian interference in the 2016 election and ties to the Trump campaign was chosen as the top political story of 2017, narrowly beating out the fallout from sexual harassment. 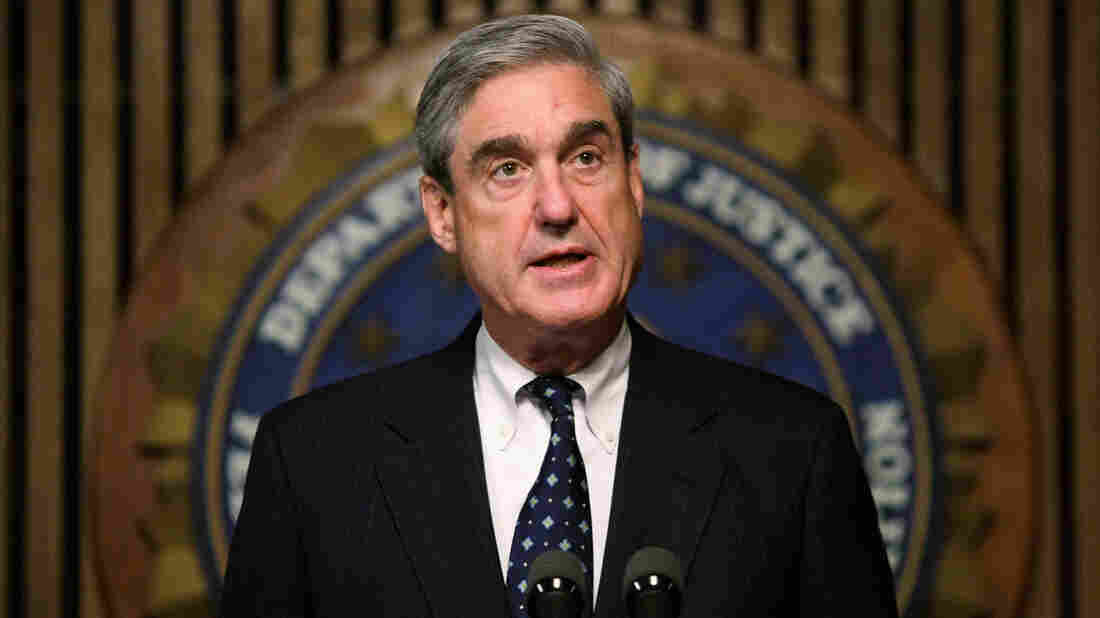 Robert Mueller speaks during a 2008 news conference at FBI headquarters in Washington during his term as FBI director. Alex Wong/Getty Images hide caption 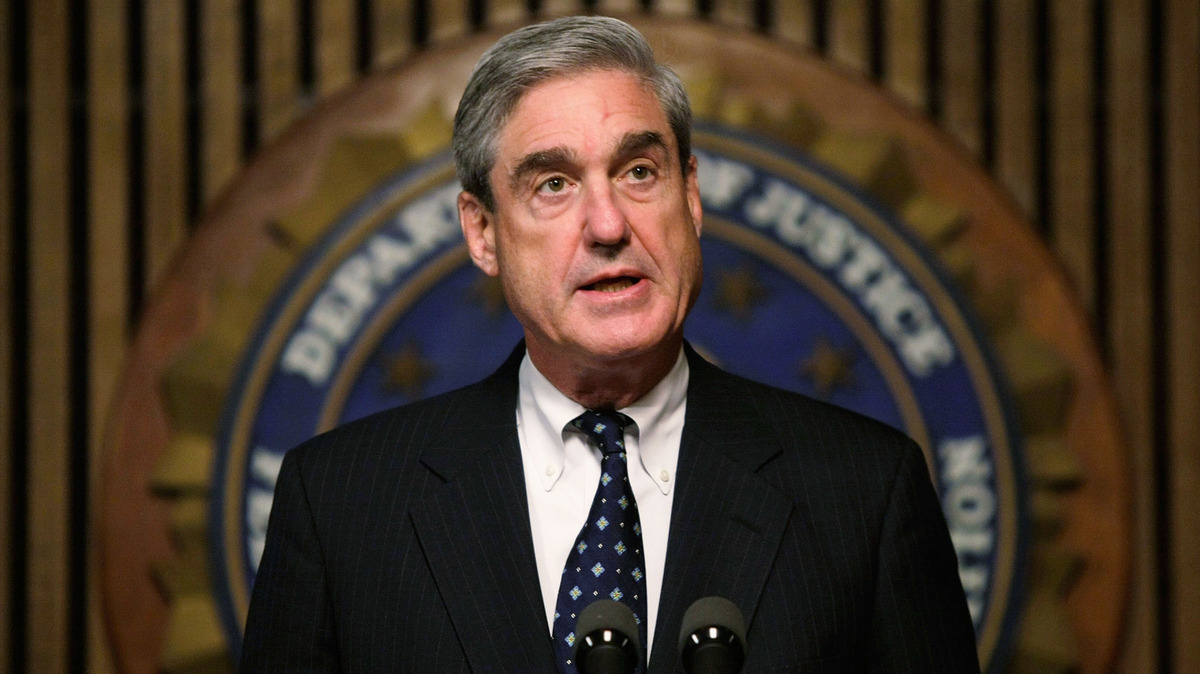 Robert Mueller speaks during a 2008 news conference at FBI headquarters in Washington during his term as FBI director.

The Russia probe, led by special counsel Robert Mueller, was chosen as the top political story of the year.

It narrowly beat out the sweeping story of fallout from sexual harassment, which touched on every industry, caused the resignations of a senator and members of Congress and continues.

The selection happened through Twitter, where more than 4,700 users voted on the final matchup of a March Madness-style 64-story tournament.

We Sort Out Political Headlines Using A March Madness Bracket

We Sort Out Political Headlines Using A March Madness Bracket

The final four included the Women's March and the firing of James Comey, the former FBI director. It was a clear indication of what readers saw as the two big thematic stories of the year — Russia and women/sexual harassment.

Pick The Biggest Political Story Of 2017

But, in the end, it was the Russia probe that won out. It has ensnared four people who worked on the Trump campaign, including his former campaign chairman Paul Manafort and national security adviser Michael Flynn.

Flynn pleaded guilty to lying to the FBI, far less than he could have been charged with. But Flynn got a better deal because he is cooperating with the investigation, which could indicate Mueller is climbing even higher up the ladder of Trump's inner circle.

Mueller's tenure has come under sharp criticism from conservatives and allies of President Trump looking to discredit the investigation. It's sure to be a closely watched and consequential story in 2018.

There were 285 bracket submissions from users. And one man won out — Dave Steadman (@davesteadman). (He wins NPR Morning Edition host David Greene's voice on his voicemail.) Here's Dave's bracket:

A look at the final two brackets out of 285 submitted. Nice work all around. Good conversations had on the news merits of the match ups. @davesteadman @courtneyknorris pic.twitter.com/a8FSxZ5mTh

You can view the full results here: 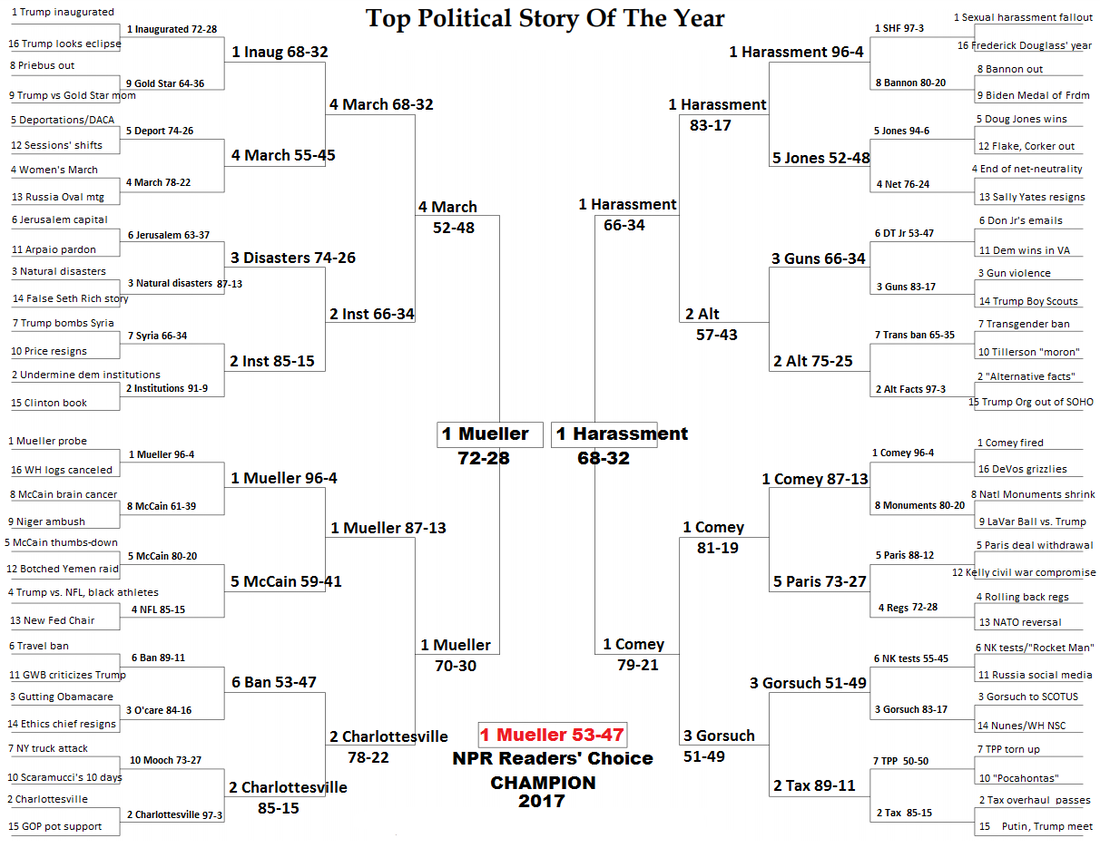 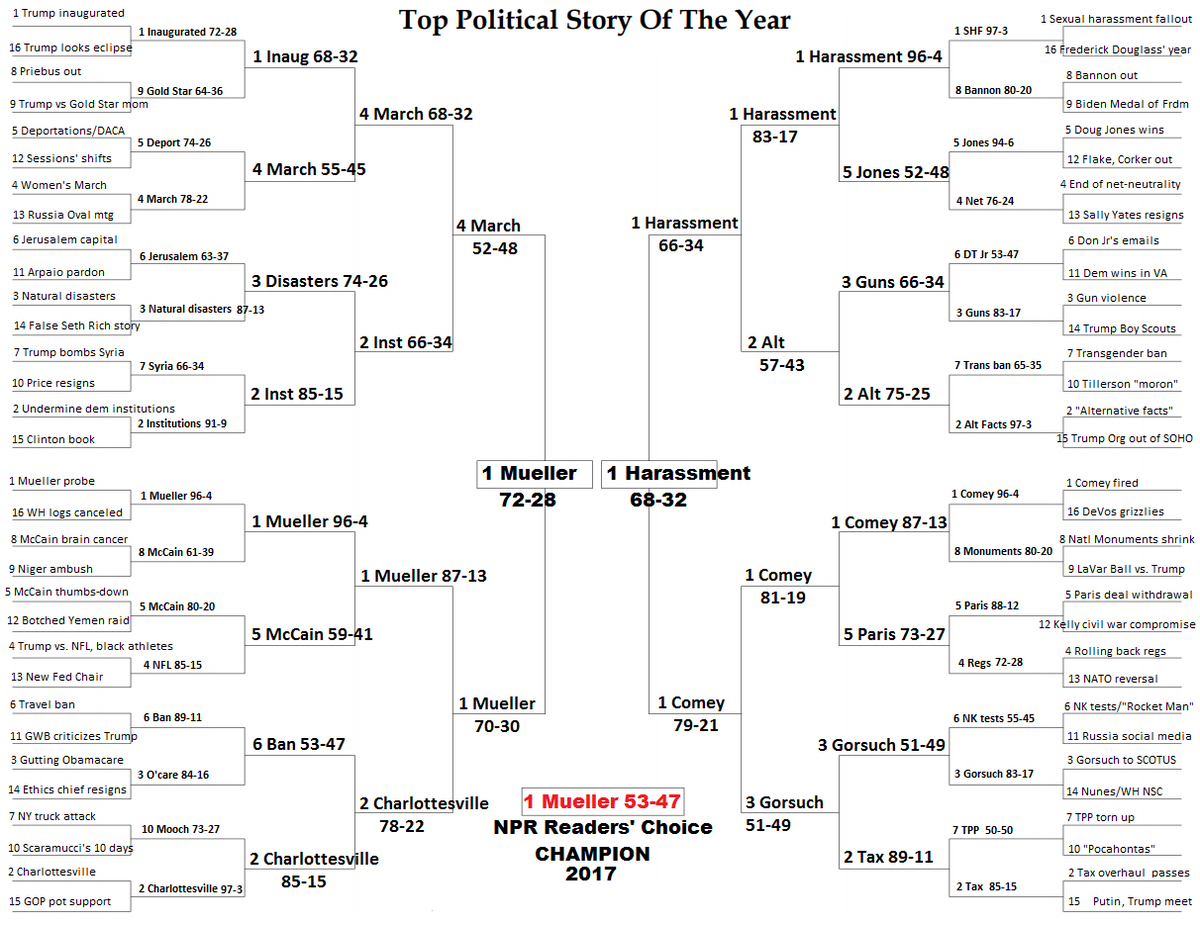 NPR readers picked the Mueller probe as the top political story of 2017.