Accessibility links
Does The Magic Last? Revisiting A Fantasy Classic As An Adult David Eddings' beloved Belgariad (and several sequels), co-written with his wife Leigh, follows farm boy Garion and his magical destiny. It wrapped up 20 years ago; are its powers still intact?

Does The Magic Last? Revisiting A Fantasy Classic As An Adult

Does The Magic Last? Revisiting A Fantasy Classic As An Adult 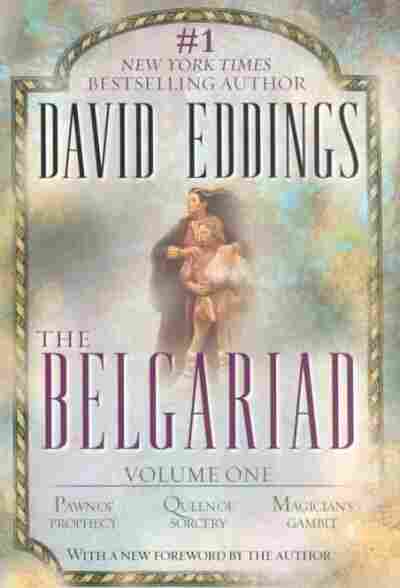 The Belgariad: Pawn of Prophecy, Queen of Sorcery, Magician's Gambit

Revisiting our favorite books from adolescence is a tricky thing. These are, after all, novels we bonded with during a very impressionable time in our lives. As with our first romantic loves, we're often not willing or even able to see their faults. Even in hindsight, our judgment is colored — by nostalgia, by comfort, by the sense that these books are old friends. It's something I kept in mind during a recent re-read of the Belgariad and the Malloreon, two connected series of fantasy novels from the '80s and '90s written by David Eddings and his wife Leigh Eddings (although Leigh only began being credited toward the very end).

Runaway bestsellers in their day, the staggering 12 novels that comprise these series — five in the Belgariad, five in the Malloreon, plus two whopping standalone novels, a cycle which celebrated the 20th anniversary of its completion in 2017 — are staples of the genre, the kind of dog-eared paperbacks that remain piled up in used bookstores. As it turned out, my re-read revealed many of the reasons why Eddings' books continue to be cherished by fans — and why they also pile up on the secondhand shelves, relics of a less enlightened era.

Pawn of Prophecy, the first installment of the Belgariad, was published in 1982, and it was an instant sensation. I was ten at the time, and my Uncle Mike, a big fantasy fan, bought me the book. I had already read fantasy staples by J.R.R. Tolkien and Lloyd Alexander by that age, so Pawn of Prophecy was right up my alley. I fell head-over-heels with it. In the book, a farmboy named Garion gradually begins to learn that his Aunt Pol, the cook in the farm's kitchen, is much more than she seems — and that Garion himself is the heir to an ancient power. Pursued by enemies of his family, he embarks on a quest across new lands as glimmers of his birthright begin to appear. Along the way, he encounters strange adversaries, colorful fellow travelers, and the deepening realization that his destiny is both noble and terrifying.

You couldn't make a hero's journey more Campbellian if you tried.

You couldn't make a hero's journey more Campbellian if you tried. Eddings was a struggling, middle-aged author of contemporary adventure when Pawn of Prophecy was published, and by his own admission, he undertook fantasy with a somewhat cynical motive: One day he saw how many printings Tolkien's The Lord of the Rings had gone through, and he figured there must be more commercial potential to the genre than he thought. Accordingly, Pawn of Prophecy — and the four books that follow in The Belgariad, where Garion becomes Belgarion, a sorcerer and king tasked by fate to duel to the death with an evil god — ticks off every box that can make modern mainstream fantasy both beloved and formulaic. Like everyone from Luke Skywalker to Harry Potter, Garion is an orphan who must learn to master his own growing power. The maimed god Torak is Garion's insidious nemesis, an archetype cut from the same cloth as Darth Vader and Voldemort. And where Luke had Obi-Wan and Harry had Dumbledore, Garion has Belgarath, a white-bearded and immortal sorcerer who also happens to be his grandfather, dozens of generations removed.

Eddings' lack of freshness isn't enough to dent the warmth and camaraderie between his characters, nor the gently biting banter that typifies his dialogue.

Surprisingly, these worn out tropes didn't bother me when I tackled the Belgariad again as a jaded adult. Eddings' lack of freshness isn't enough to dent the warmth and camaraderie between his characters, nor the gently biting banter that typifies his dialogue. I found myself swept along in the author's obvious enthusiasm for his own creations, just as I had been decades ago. Other things, however, troubled me. As a kid, I never noticed the obsolete gender roles Eddings assigned his characters. Aunt Pol — who also happens to be Polgara the Sorceress, the most feared and powerful woman in the world — spends an inordinate amount of page-time happily doing domestic chores. Princess Ce'Nedra, Garion's love interest, intrepidly raises an entire army only to leave it in the hands of the men. Certain characters break stereotype, such as Queen Porenn, who has an excellent grasp of policy and tactics — but it's always made wincingly clear in the text that she's a glaring exception who only knows about military and political matters because she's married to a king who's taught her such things.

To Eddings, it's more plausible that sorcery can move mountains than it is that women can be portrayed centrally and strongly. Even worse are the series' racial politics.

The Belgariad is an epic fantasy, and as such, it's set in a world that's roughly medieval in terms of sociopolitics. For far too long, that's been used as an excuse to portray female characters in fantasy novels as secondary, menial, or lacking in agency. But the Belgariad is not a real-world history; it's not beholden to what actual medieval Europe looked like. To Eddings, it's more plausible that sorcery can move mountains than it is that women can be portrayed centrally and strongly. Even worse are the series' racial politics. The kingdoms of the West are the fair-skinned good guys; the kingdoms of the East are populated by villains with slanted eyes, either systematically sinister or congenitally stupid. The Westerners — even some of the main characters, painted as heroes — speak regularly of genocide as a final solution to their racial problems. Such ideas are presented so nonchalantly in the books, they never struck me as a kid. As an adult, they're hard to stomach. 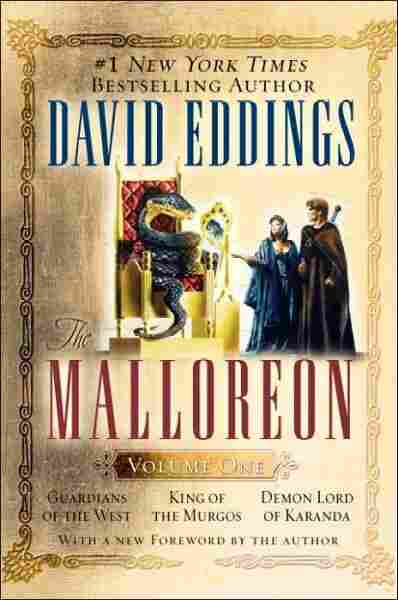 Things do not get better in the Malloreon. The sequel series' five books, starting with 1987's unsettlingly titled Guardians of the West, continue on the same course as their predecessors. At one point, Belgarath says, "At least the other ladies have sense enough to realize that a battlefield is no place for a woman." He's talking to Polgara, a 3,000-year-old mage who's already shown herself to be devastatingly effective on the battlefield in the Belgariad. It's never been entirely clear what the extent of Eddings' collaboration with his wife was throughout the series; in an interview in 2003, six years before his death, he said she helped him especially with his female characters. "When it gets down to interactions between people — especially men and women — [Leigh] gets right in there," he said of his writing process. "She knows women. Like most men, I don't understand them!"

Sadly, Eddings also didn't understand how to craft a compelling sequel. When I read the Malloreon as it was published throughout the late '80s and early '90s, I was just happy to get to spend some more time with Garion, Ce'Nedra, Belgarath, Polgara, and all these other people I had grown to adore. Eddings, to his credit, had a real way with breathing life into his sprawling cast of major and minor characters. But the Malloreon is based on the premise that the showdown between Garion and Torak at the end of the Belgariad — which was touted as the ultimate resolution of a grand, metaphysical conflict between to warring prophecies — wasn't so ultimate after all. Eddings did it all with an unconvincing wave of his hand, rather than putting forth a remotely believable reason why the entire cycle of events that took place in the Belgariad we being repeated, almost verbatim, in the Malloreon. Way back in 1982, Eddings titled his initial fantasy offering Pawn of Prophecy; by the end of the Malloreon in 1991, that title seemed to mock Eddings' own inability to refresh or deviate from his own formula.

The Belgariad and the Malloreon were last gasps, in a sense, of a certain kind of fantasy that proudly buried its head in the sand of tradition and stereotype rather than challenging them.

Eddings' tenure in Garion's world ended twenty years ago, with the publication of the standalone novel Polgara the Sorceress in 1997. It was preceded by Belgarath the Sorcerer in 1995, and together, these two books filled in the rich backstory of these two characters that was only hinted at throughout the Belgariad and the Malloreon. (I'm not counting The Rivan Codex, an odd volume published in 1998 in which Eddings offered writing advice and detailed the inspiration and process that went into the creation of these series.) Both prequels and afterthoughts, neither Polgara nor Belgarath are essential to the bigger story — and on re-reading them, I found them hollow, little more than victory laps for Eddings.

I won't say I felt entirely cheated or disillusioned by my revisitation of the Belgariad and the Malloreon. In particular, the initial five books sparkle, enough to offset their backward treatment of gender and race. But Eddings' books came at a time when fantasy literature was transitioning into something more complex and nuanced, thanks to authors like Tad Williams and George R. R. Martin, all of whom began releasing groundbreaking epic-fantasy series in the late '80s through the mid-'90s. The Belgariad and the Malloreon were last gasps, in a sense, of a certain kind of fantasy that proudly buried its head in the sand of tradition and stereotype rather than challenging them. I'm glad I re-read them, as much to reacquaint myself with some childhood friends as to remind myself that the romances of our youth aren't always as rosy as we remember. As for my dog-eared old copies: They might just wind up on those secondhand stacks.