Accessibility links
Not My Job: We Quiz Metallica's Lars Ulrich On Puppet Masters The drummer of the band behind the celebrated album Master Of Puppets answers questions about other puppeteers.

The drummer of the band behind the celebrated album Master Of Puppets answers questions about other puppeteers. 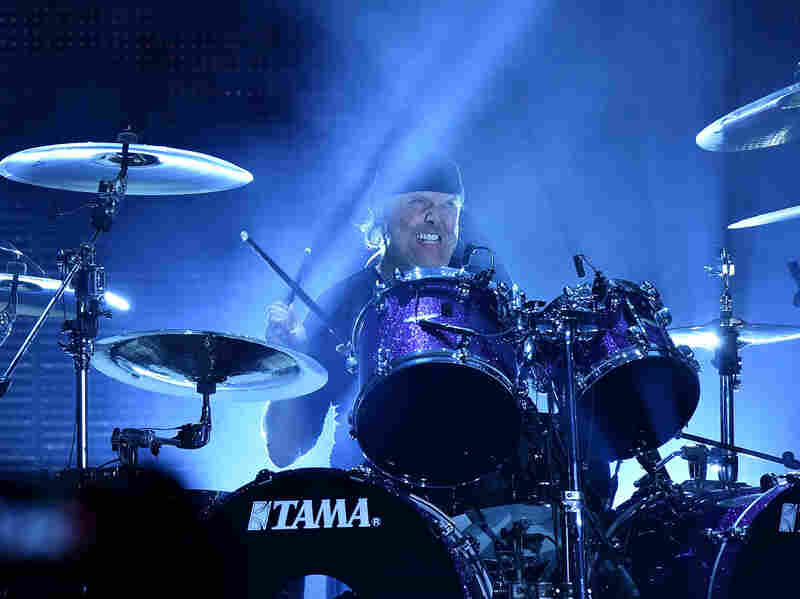 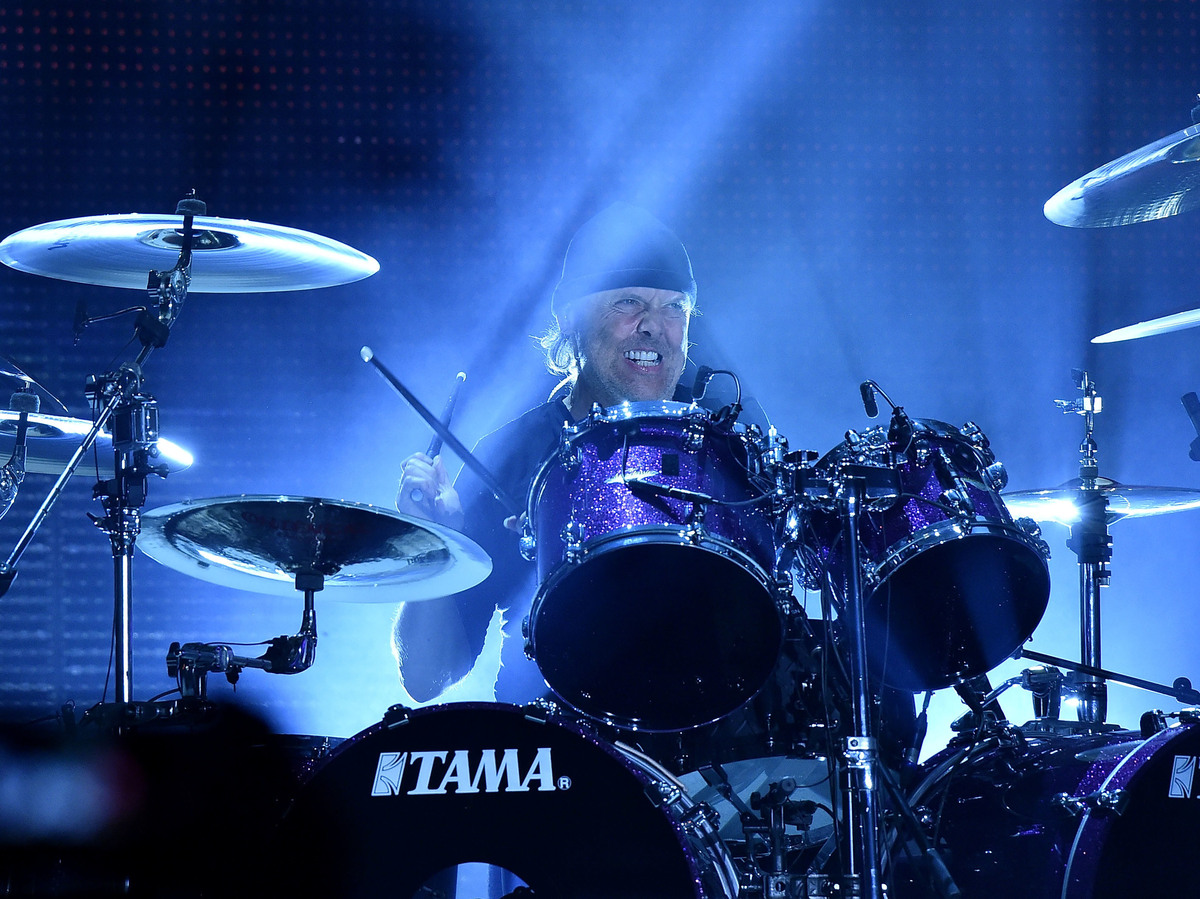 And now the game where we ask people who've done amazing things about some not so amazing things. It's called Not My Job. So when he was a young man, Lars Ulrich was a top tennis player in his native Denmark and dreamed of going pro. But when he moved to Los Angeles, he discovered he wasn't going to make it. So he settled for becoming a drummer and, with James Hetfield, founded one of the greatest bands of all time, Metallica.

SAGAL: So is that true that you grew up playing tennis? That was your first passion, right?

ULRICH: Yes, my dad was a professional tennis player. So I grew up on the tennis tour.

ULRICH: And there aren't many tennis players in Denmark. And I was ranked in the top 10 in most of the age groups.

ULRICH: So when we moved to Los Angeles after I finished school in Denmark, I wasn't ranked in the top 10 on the street that I lived on.

SAGAL: I love the fact that your birth as a rock 'n' roll legend came out of bitter disappointment.

ULRICH: Bitter disappointment - well, listen, it wasn't a hard switch to make. I was 16. And I had my first beer and looking at girls differently and all that. So making the transition to rock 'n' roll wasn't a difficult thing.

SAGAL: But really, I mean, sometimes when you're playing with Metallica in front of, like, enormous sports stadiums filled with 40,000 people, do you go - yeah, it's nice - it's not tennis?

ULRICH: That doesn't happen often, no.

SAGAL: How did you come up with the name Metallica for your band?

ULRICH: Well, I came up here actually in the spring of 1981 and ended up at a kegger over on Strawberry Hill. And I met a bunch of really cool San Francisco kids. One them was named Ron. And he told me he wanted to start his own fanzine, like a hard rock fanzine, where he wrote about all his favorite bands. And he wanted - he asked me whether he should call the fanzine Metallica or Metal Mania. So I suggested that he call it Metal Mania.

LUKE BURBANK: Is Ron the guy sharpening a knife outside the theater?

ULRICH: Yes, he's - yeah. I have to make a quick getaway out through that door.

SAGAL: So this is a tough question to ask anybody, but I'm going to do it anyway. Metallica, once you founded it and your records came out in the late '80s, early '90s, you became the biggest metal band if not the biggest hard rock band of all time. Can you explain why, what it was about your band and your sound?

ULRICH: Other than our good looks?

ULRICH: Yeah. We were really inspired by what was going on in Europe at the time.

ULRICH: So we took those European influences and kind of had a new sound. And so when you say - why did we end up becoming more well-known or whatever? - it was because we had a different sound than most of what was going on in California...

ULRICH: ...And in the States at the time.

ULRICH: We usually - we warm up. We sort of get stretched, and we get strange oils rubbed into our shoulders. It's kind of like - it's kind of nasty...

ULRICH: There's a few too many protein shakes back there. And this is back in the bowels of the stadium that we're playing in. And then we go into what's called a tune-up room. And I play for about a half an hour and warm up on an actual drum kit.

SAGAL: There you go. You are a knight.

ULRICH: In Denmark, they use a different term. But...

SAGAL: What is the term?

ULRICH: ...The English equivalent would be a knight, yes. I - a few months ago, the crown prince of Denmark was in town. There was a conference of Danish business leaders, you know, the Legos of the world...

ULRICH: ...The Maersks and all the other leading Danish companies - they were all over in Sausalito at Cavallo Point. And I was invited to join the festivities. And there was a dinner. And I showed up to that and got ambushed. His Royal Highness stood up and started talking about a particular person in the room who had talents far and above most other people in Denmark. And...

SAGAL: But not for tennis.

ULRICH: ...Who the hell is he talking about? And about five or 10 minutes later, I realized that he was talking about me. And in the middle of that whole speech, he pulled out a cross. It's called a (speaking Danish) in Danish, which translates to something like a riding cross. It involves, like, horses and swords and that kind of stuff. And then I stood up, and he put it on me. And I was a knight. There was no sword involved. And there was no...

ULRICH: And there was no kneeling involved, thankfully. But Denmark is a very informal country. And so it was done as informal as Danish traditions are. But yes, it's a true story.

BURBANK: Wait until you find out you're only the 10th-best knight on your street.

SAGAL: Well, Lars Ulrich, we are delighted to talk to you. We've invited you to play a game we're calling...

BILL KURTIS: You Want to Put Your Hand Up Where?

SAGAL: Metallica is known, among other things, for their celebrated album "Master Of Puppets." So we thought we'd ask you some questions about your colleagues, other puppet masters.

SAGAL: Answer two out of three questions, and you'll win our prize for one of our listeners, the voice of Carl Kasell. Bill, who is Lars Ulrich playing for?

SAGAL: OK, Lars, here's your first question. Puppets can be really helpful as in which of these - A, a company in Switzerland makes a life-sized parent puppet for new drivers who want to feel like there's still an adult in the car...

SAGAL: ...B, Kansas City Chiefs safety Eric Berry who was terrified the team mascot, a horse, so he got used to it by practicing with a horse puppet; or C, to avoid exposing their officers, St. Louis police drive up to drug corners crouching down and they use puppets to make drug buys through the window?

ULRICH: So one of those three is...

SAGAL: One of those is true.

ULRICH: One of those is true.

SAGAL: Helpful use of a puppet.

SAGAL: You're going to go with A, the life-sized parent puppet so you can...

SAGAL: ...Even if you're just - even if you're driving on your own, you can still feel like Mom or Dad is there.

SAGAL: Why don't you think it's true, Mo?

ROCCA: Because of your reaction. You went - you're going to go with that?

ULRICH: What do you guys think?

ULRICH: I'm going to have to stick with A because I don't want to go back on what I said, so I'll go with A.

SAGAL: All right, you're going to go with A.

SAGAL: The answer is B, in fact, the one that you dismissed.

SAGAL: They were right.

SAGAL: Football player Eric Berry suffers from equinophobia, an irrational fear of horses. And among the many things he has done to try to accustom himself is to talk to a little horse puppet. It is absolutely true. You can see it online.

ULRICH: Are you guys not supposed to help me?

SAGAL: OK, next question. Puppets have played a role in politics as in which of these - A, to answer charges that he was a puppet of the Koch brothers, Congressman Ron Estes ran a commercial with a puppet and the slogan - hey, puppets can be great...

SAGAL: ...B, in order to do two public appearances in one night, California Governor Jerry Brown sent a puppet of himself to the other venue to lip sync a live feed of his remarks...

ROCCA: It's not that.

SAGAL: ...Or C, in 2010, Arizona Governor Jan Brewer used a singing frog puppet to sing the praises of her show-us-your-papers anti-immigration law?

HONG: Oh, they're split. Go with your gut, Lars.

SAGAL: In response to criticism that she was cracking down too harshly on immigrants, Governor Brewer had a puppet tell everybody it was just fine, really. Last question - if you get this, you win. Here we go.

SAGAL: Puppets have caused controversy when which of these happened - A, a ventriloquist dummy was arrested in Boston - but not the ventriloquist - on obscenity charges...

SAGAL: ...B, a billboard for the puppet show "Avenue Q" in Colorado Springs was censored because of quote, "puppet cleavage"...

SAGAL: OK. All right. You're going to go for B, puppet cleavage?

SAGAL: You're right. It was the puppet cleavage.

SAGAL: Now to be fair to the shocked people of Colorado Springs, the puppet was called Lucy the Slut. So...

SAGAL: All right, Bill, how did Lars do on our quiz?

SAGAL: Yeah, he got it. Congratulations, Lars Ulrich.

SAGAL: Lars Ulrich is the founder and drummer of Metallica. Their newest album is "Hardwired... To Self-Destruct." The band's on tour. Lars Ulrich, thank you for being here on WAIT WAIT... DON'T TELL ME.

(SOUNDBITE OF METALLICA'S "THE END OF THE LINE")

SAGAL: When we come back, two more of our favorite guests, the Barefoot Contessa and the suited talk show host better known as Ina Garten and Stephen Colbert. We'll be back in a minute with more of WAIT WAIT... DON'T TELL ME from NPR.