Accessibility links
Utah Sen. Orrin Hatch To Retire, With Speculation Focused On Mitt Romney The longest-serving Republican in the Senate says he will not seek an eighth term this fall. Former 2012 GOP presidential nominee Mitt Romney is said to be mulling over a bid for the open seat. 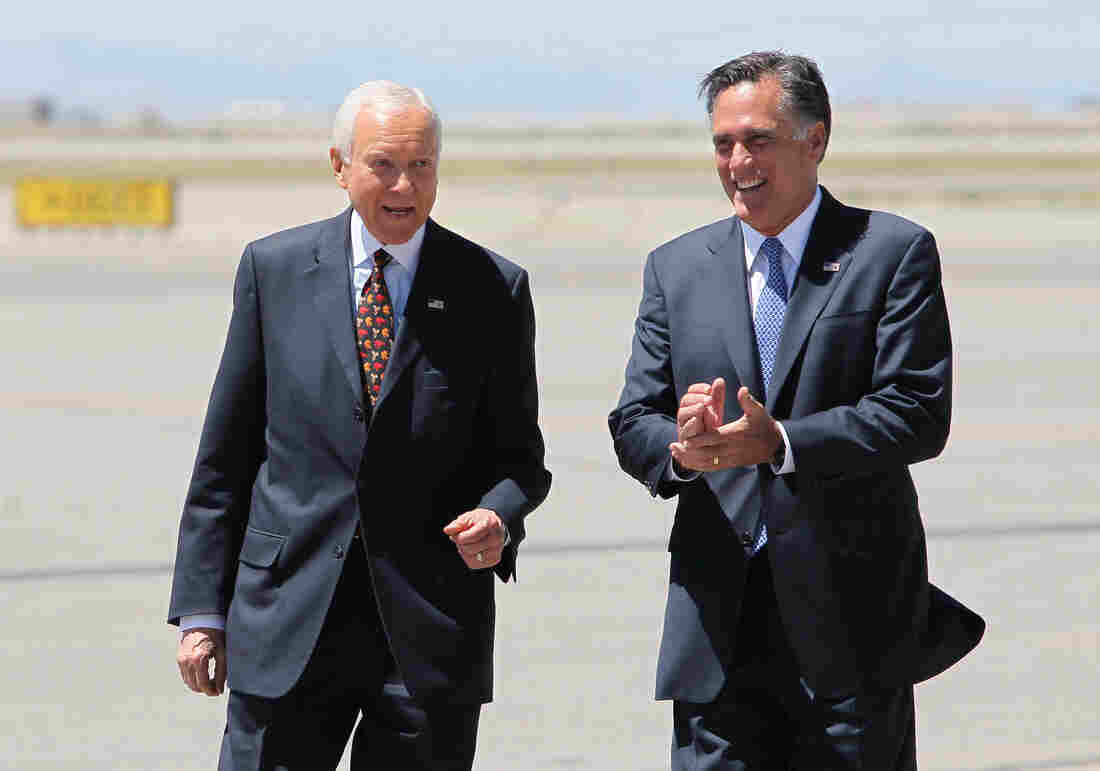 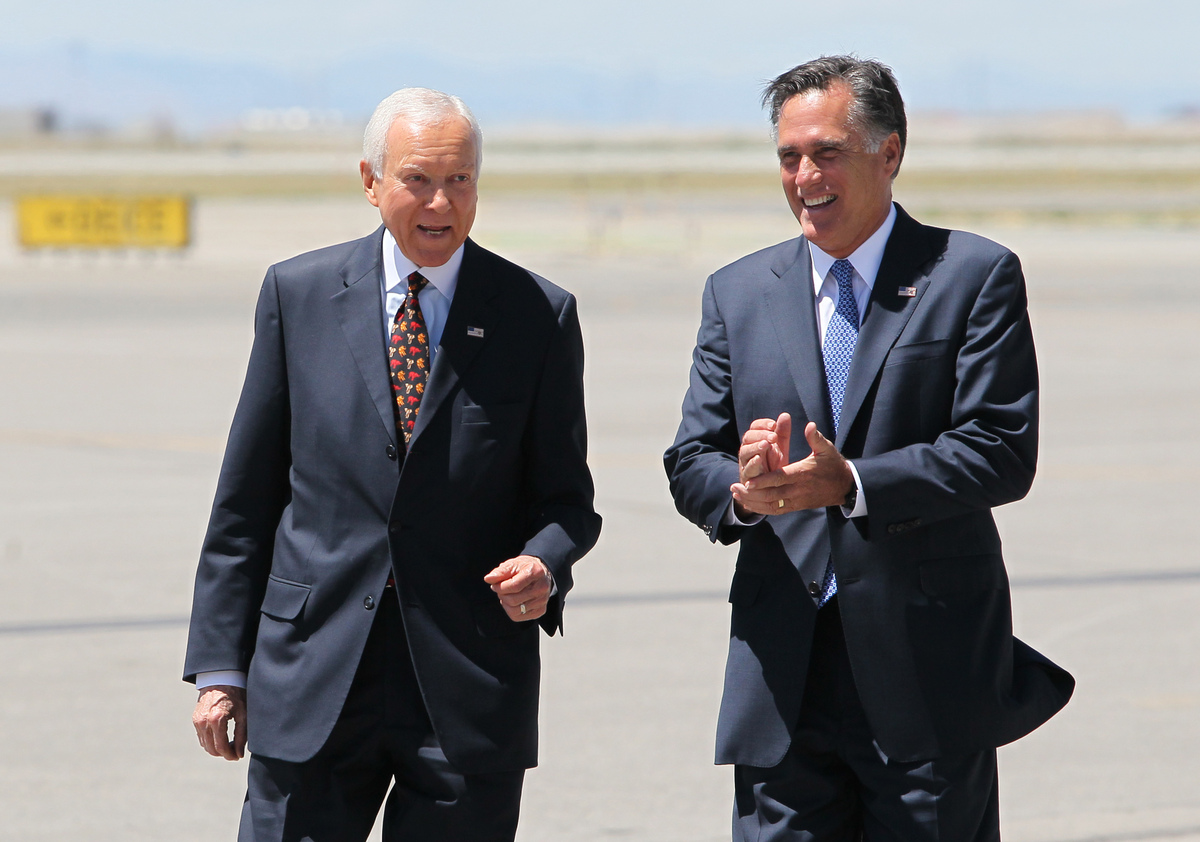 Mitt Romney (right) with Sen. Orrin Hatch, R-Utah, who met him on the tarmac at Salt Lake International Airport in June 2012.

The longest-serving Republican senator in American history is finally ready to call it quits.

Utah GOP Sen. Orrin Hatch announced on Tuesday that he will not run for re-election in 2018 and will leave the Senate at the end of his current term, after 42 years in his seat.

"When the president visited Utah last month, he said I was a fighter. I've always been a fighter. I was an amateur boxer in my youth, and I brought that fighting spirit with me to Washington," Hatch said in a video statement. "But every good fighter knows when to hang up the gloves. And for me, that time is soon approaching."

Hatch, 83, is the chairman of the powerful Senate Finance Committee. He worked with the Trump administration on the major tax bill that passed just before Christmas. It was an ambitious legislative goal that will cap off his historic Senate career.

President Trump had urged Hatch not to retire. On a trip to Utah in December, Trump called him a "true fighter" and said he hoped Hatch would stay in the Senate "for a very long time to come."

Some in Utah disagree; in a recent editorial the Salt Lake Tribune said Hatch has shown "an utter lack of integrity" and called on him to retire. The paper criticized his role in dismantling national monuments and crafting the tax bill, both of which were major priorities of the White House.

Trump sent Hatch good wishes on Twitter Tuesday afternoon, calling him "my friend" and thanking the senator for "beyond kind" things he has said about the president.

Congratulations to Senator Orrin Hatch on an absolutely incredible career. He has been a tremendous supporter, and I will never forget the (beyond kind) statements he has made about me as President. He is my friend and he will be greatly missed in the U.S. Senate! pic.twitter.com/0VjzLEeHTl

Hatch's retirement kicks off an open race for a reliably Republican Senate seat, and one worry for Trump is that one of his biggest GOP critics could replace the Utah senator: Mitt Romney, whose name has been at the top of the list for the GOP nomination for months.

When asked if the president would commit to campaigning for the eventual GOP nominee, White House press secretary Sarah Huckabee Sanders said, "I don't think we've made a determination in terms of campaigning, but the president certainly has the greatest and deepest amount of respect for Sen. Hatch and his over four decades of experience in the Senate."

One hint of his intentions came on Tuesday when a reporter for Bloomberg News noted that the location of Romney's Twitter account changed from Massachusetts to Holladay, Utah, a suburb of Salt Lake City.

The failed 2012 GOP presidential nominee and former Massachusetts governor has deep familial and political ties in Utah owing to his Mormon faith and his successful management of the once-troubled 2002 Winter Olympics. His family maintains a residence in the state, and Romney hosts an annual political gathering in Utah popular with the GOP establishment.

At a time when voters have rallied around outsiders, Romney is a consummate insider. While he would clearly be favored by the national party and top donors for the nomination, he could face a primary fight from the activist right.

Is Trump Waging A Hidden Campaign Against Mitt Romney?

He blasted Trump during the 2016 campaign, delivering a speech calling him "a phony, a fraud." Romney went on to say, "He's playing the American public for suckers: He gets a free ride to the White House and all we get is a lousy hat."

Yet Romney's criticism of Trump may not be as politically damaging in Utah, where the president has struggled to gain a foothold with the state's socially conservative voters.

Romney's relationship with Trump thawed briefly when Romney was under consideration to be secretary of state, but he has continued publicly criticizing the president since he took office.

After the violence around a white supremacist rally in Charlottesville, Va., last summer when the president said there were good people "on both sides," Romney wrote a lengthy Facebook post in which he said, "Whether he intended to or not, what he communicated caused racists to rejoice, minorities to weep, and the vast heart of America to mourn."

Romney is likely to have Hatch's support. In March, the senator hinted that he might opt to retire if Romney would run to replace him. Hatch told National Journal that Romney would be "perfect" for the Senate. An unusual factor could be Romney's age, 70. However, many senators serve well into their 80s, and Romney's popularity would most likely overcome any concerns. He ran for Senate from Massachusetts in 1994 but lost to veteran Democrat Edward Kennedy.

"I've expressed it to him. I can see why he might not want to do it, but I can also see why if he did it, it would be a great thing for America," Hatch said then.

While Romney would enter the Senate at the bottom rung of seniority if he won, his national profile and personal popularity could elevate him almost immediately into a position of influence in the clubby Senate. The closest analogy would be former Sen. Hillary Clinton, who won a New York Senate seat in 2000 after eight years as first lady.

If Romney won, he would also enter at a time when major moderate GOP voices critical of Trump, like Tennessee's Bob Corker and Arizona's Jeff Flake, are leaving. Both have announced they, too, will retire at the end of 2018 instead of running again.

As the longest-serving senator in the majority, Hatch serves as president pro tempore, which puts him third in the line of succession to the presidency after Vice President Pence and House Speaker Paul Ryan, R-Wis.

If Senate Republicans hold their majority, Mississippi Sen. Thad Cochran is poised to serve as president pro tempore in the next Congress.

The original story incorrectly stated that Sen. Marco Rubio of Florida came in second place in the 2016 Utah GOP caucuses. It was Gov. John Kasich of Ohio.